Like many sports, the global pandemic has dealt a heavy blow to Rugby Fives. However, following an enforced lay-off during the second national lockdown, the RFA has produced a guide to what is and isn’t possible under the Tier restrictions in the UK. The details are summarised below. 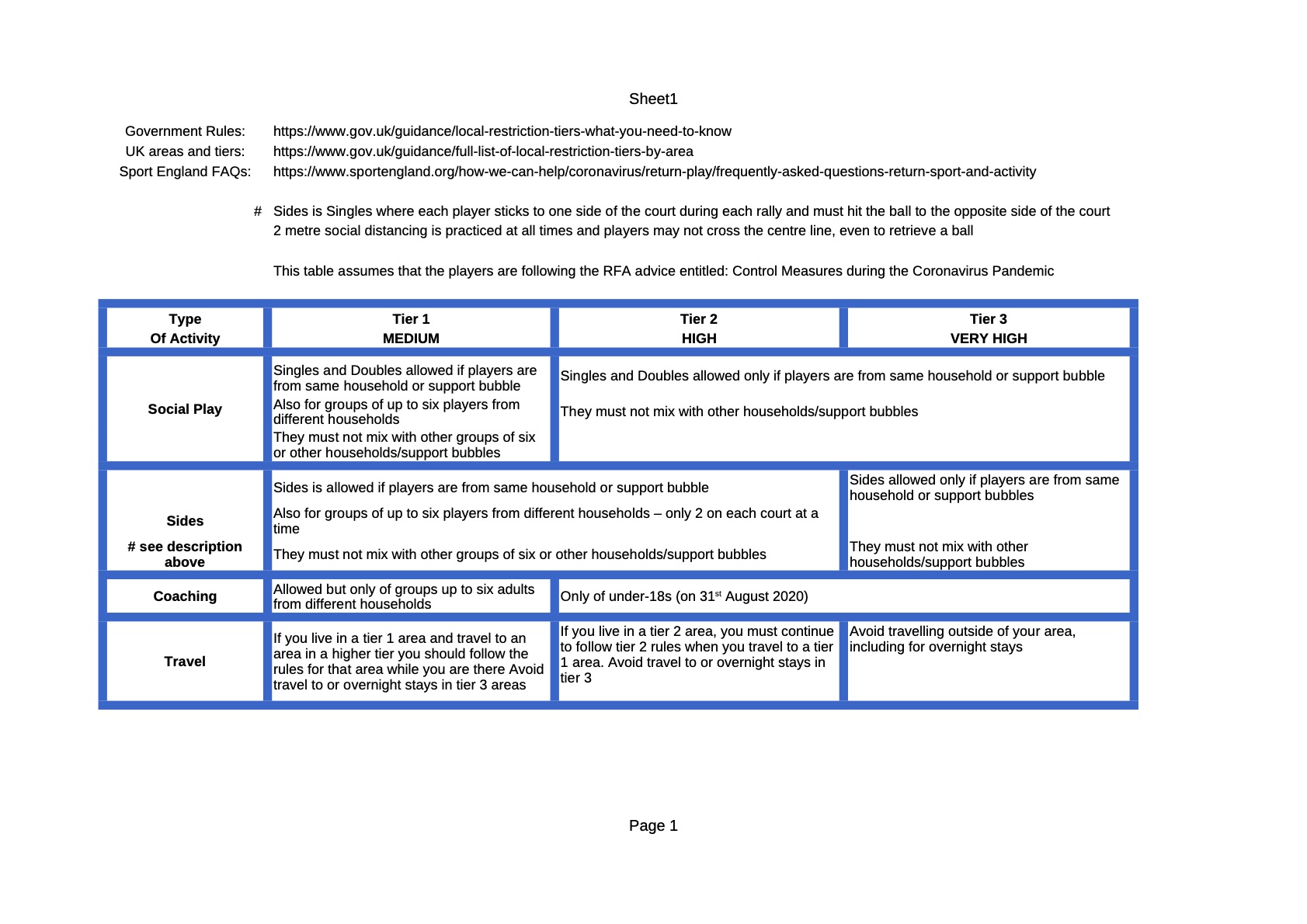 Earlier in the year, the Association issued a set of proposals for a return to play and you can download these by clicking on this link, but we are also reproducing the details below. And at the bottom of the page, we’re giving the latest details we have on the state of play at clubs and schools around the country.

Control Measures during the Coronavirus Pandemic
1. Participants must accept that Control Measures are being put into place to minimise the risk of transmission and not to eliminate it.
2. Participants (or the guardians of players under the age of 18) must make an informed decision about their own risk – particularly if they have underlying health conditions.
3. This check-list must be promulgated to coaches, assistant coaches, players, guardians (i.e. teachers/coaches or parents) and welfare officers.
4. All players must undergo a self-assessment for COVID-19 symptoms.
◦ Do not attend if you have a high temperature, or a new continuous cough, or a loss of (or a change to) their sense of smell or taste. If you have such symptoms then follow government agency guidance. For players under the age of 18, the parent or guardian must complete the self assessment.
5. No inter Club/School matches or Competitions unless the Club/School has put in place measures to control the spread of COVID-19 that are in line with government advice.
6. Avoid using changing rooms, showers and toilets.
7. Fives courts with enclosures should, if possible, be used with ventilation fans on maximum andwindows and doors open.
8. The Club will set up a method for recording the date and attendance at each session to allow Test and Trace to be completed should any member of the Club contract COVID-19. This record must be kept for 21 days.
◦ It is expected that schools will already have this in place
9. Players should sanitize their hands on arrival and whenever gloves are removed
10. Clubs/schools should ensure that hand-sanitizer is available for this purpose.
11. Turn up for the Club session already changed ready to play.
12. Gloves must be worn and removal minimised during a session.
13. Do not touch other participants with bare hands
◦ Keep to at least 2 metres apart when off court and when warming up
◦ Keep abreast of government requirements, including differences within the UK
14. When playing competitive games, keep at least 1 metre away from other players, however, moving closer than one metre fleetingly (less than 3 seconds) is allowed so long as you are not face-to-face.
The relevant distance is from the face of one player to another
Keeping to this rule is, in fact, the natural way in which Fives is played
15. If it appears that two players are likely to clash then a ‘let’ must be called to stop the rally
◦ Gloved hands can be used to check the motion of another player and prevent close contact
16. The hand-shake at the end of each game is NOT allowed – an elbow bump is OK.
17. Balls should not be handled with bare hands – select a ball after putting on gloves and return the ball to the storage box before removing gloves.
18. Surfaces commonly touched by the players’ bare hands should be disinfected, using a technique effective against viruses, before and after play.
19. If possible, gloves should not be shared and any players without their own gloves should be allocated gloves for the duration of the pandemic.
20. If shortages of gloves means that they must be shared then each person handling the gloves must wash or sanitise their hands immediately before and afterwards
◦ In addition, cotton inner-gloves should be worn, taken home and washed after every use
21. After use, gloves should be exposed to the air to allow them to dry out (as normal) and anypossible COVID-19 infection to subside.
22. Spectators are allowed but are limited to 6 and, together with the players, must be socially distanced in-line with Government guidance – school Control Measures may supercede this.
23. All Clubs, Schools and Players should review these measures and be responsible for including them in their local plan together with any additional measures thought necessary

Note: discussion and correlation of these Control Measures with government advice is available on request from Stuart Kirby.

BEDFORD
Bedford Modern
External players have no access to the courts at the school, and will not do so until the beginning of 2021 at the earliest.

BRISTOL
The city of Bristol is now in Tier 3 until 16th December (at least) and the West of England Club has agreed with Clifton College that the resumption of Fives will be reviewed at the beginning of January. The university Fives club is in the same position.

CHRIST’S HOSPITAL
We understand that no external players are permitted on the school site at present.

DERBY
No play is possible while the city of Derby remains in Tier 3.

DURHAM
Durham University have put a hold on indoor sport for the time being, so the university club is waiting to hear when they will be allowed on to the courts, which are currently closed. As a result, the City Fives Club is also not playing at the moment.

EASTBOURNE
Eastbourne College has declared Fives an ‘outdoor sport’, so Fives is able to restart. Fives Club is happening every Tuesday evening from 8.00pm, but numbers are limited to six.

HALIFAX
The White Rose has no access to the courts, so play is not possible at the moment.

LONDON
Alleyns
The Edward Alleyn Club (formerly Alleyn Old Boys) is no longer playing, until Level 2 restrictions are lifted.
Merchant Taylors
The pupils are not playing at the moment, and will not do so until the school is happy for them to be taken off-site for games.
St. Paul’s
Neither the Executioners nor the Old Paulines are able to access the courts at present.
UCS
The Old Gowers are awaiting clarification on if/when they will be allowed to access the school’s courts.
Whitgift
No play at present for the Old Whitgiftians, but we understand the school is keeping the situation under review about when the club could start again.

MANCHESTER
There is no play at the Y Club at present.

MARLBOROUGH
Marlborough Town Fives Club is not playing Rugby Fives at present, but following the agreement of a Risk Assessment with the school, the club is playing Eton Fives on the school’s courts, which are outdoors and accessed by an external entrance.

SHERBORNE
Although pupils at the school are playing, the restrictions have prevented the Sherborne Whippets from meeting. However, they are keen to revive the weekly social hit when they can.

TONBRIDGE
The OTs are awaiting clarification from the school about whether they can return to play.

WINCHESTER
The Wessex Club are currently unable to play on the courts at Winchester College, and there is no planned date for a resumption of club play.