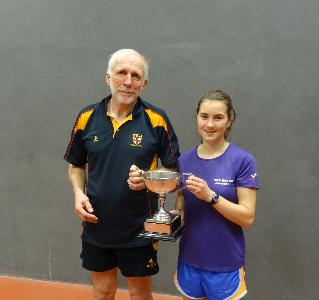 14 pairs lined up for this second playing of the Lady’s Cup. They came from Rugby, Christ’s Hospital, Aldenham, Edinburgh, Cambridge and Eastbourne; comprised pupils, students and adults of both sexes; and ranged in age from early teens to nearly senior citizenry.

Given the wide range of ability it made little sense to construct a traditional draw, especially as the twin aims of the event are for the female beginners, schoolgirls and recent leavers to go away thinking “I really enjoyed that; I want to play more Fives!” and knowing that they were much better at the game by the end than they were when they started: Not much fun, or use, then in losing 15-0 in the first round of a knockout. So the organiser drew up three groups of similar ability and/or experience. And by and large it worked.

Some of those with the least experience formed a round robin of 4 pairs, playing for the Egg Cups on court 3. Though she may have come 4th in the end Cambridge student beginner Sasha, playing with National Ladies Doubles Champion Tessa Mills, made huge strides and left with a broad smile. Rugby pupils Olivia and Seb enjoyed two wins but didn’t quite have enough points to get above Rugby’s Alice and her two partners (Jacob Brubert filled in for an injury), who also got two W’s on the board and came second. By a quirk of the scoring system the eventual winners won just the one match and lost the other two 15-16, but actually came out with the most points: Aldenham’s Milly and last year’s Oxford Secretary Tom Hoskins, playing his first Fives since the Varsity Match. Welcome back, Tom!

On court 2 five pairs consisting of partners with very varying ability fought it out for the Teacups and Coffee Cups. Initially things looked not so good for Richie Murby & Alley, but once the nerves (hers) were overcome the shots began to flow. Ben Beltrami nursed an initially bemused and increasingly bruised New Yorker Caroline through the opening games, as did Alex Smith with his protégée Zoe. Phoebe & Zac from CH showed great promise in winning two of their 4 games, but the stars of the group were the unbeaten Freya and her master i/c, Trevor White.

On court 1 the five pairs playing for the Cups and Plates were a very distinguished bunch indeed. British Number 4 Ed Kay helped Georgina, a fellow Cambridge Cuppers winner, through to a new level of play; and multiple National Ladies champion Kathleen Briedenhann gave her partner Kirsty from Rugby a lesson in footwork. Tension grew as the final matches meant that any of the other three pairs could win the most points. In the end two pairs tied for second place: Ed Hatton & Beatrix from CH and Lottie & Vlad from Rugby. As the organiser had just three plates to award Mr Hatton had to make do with a warm glow. Just one point separated these four from the winners of the Philip-Malt-Cup-as-was/Lady’s-Cup-as-is: last season’s schoolgirls champion Louise Mathias & CH stalwart Ross Stuart. Somehow one felt that the moral victory was Lottie & Vlad’s, as they had beaten Louise & Ross – and were giving away a few years!

During a lunch break Kathleen Briedenhann demonstrated Wallball, which went down well; Kathleen also arranged for T-shirts for all (even if Ben Beltrami’s was a shade short round his midriff). At the end of the day Kathleen & Tessa demonstrated their prowess as National Ladies Doubles champion in a super demonstration match against Louise and Ed H. 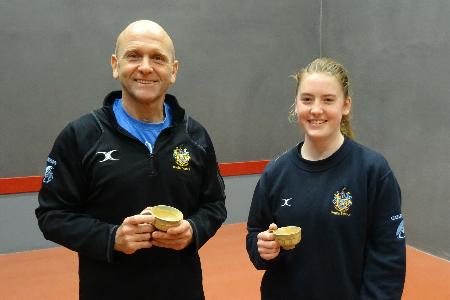 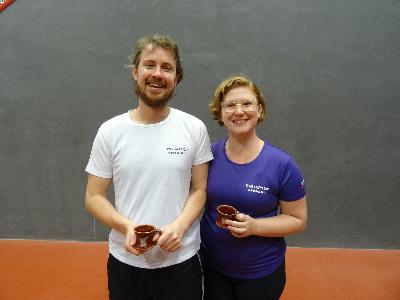 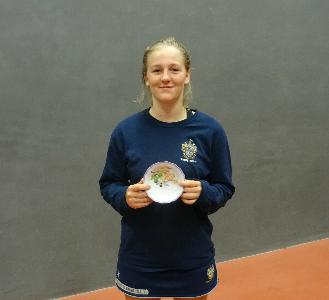 Lottie (with Vlad) – the Plates 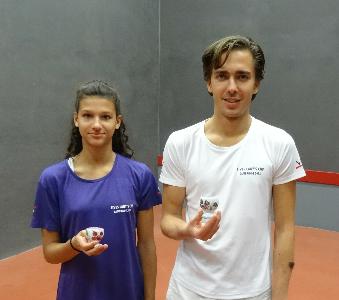