STOP PRESS: Oxford had the better of the day this year: they won the Men’s Match by 327 to 229 and the Beavers/Sparrows Match by 166-48, thereby winning the Jock Burnet Trophy for the second year in a row and the Fist of Iron for the third consecutive time. Cambridge had the consolation of winning the Ladies Match and the Silver Salver by 170-84; it was their fourth win in as many years.

Match referee David Barnes reports:  The Varsity Match has changed. A few years ago it was a comparatively classical affair, with four games of Singles in the morning and eight of Doubles after lunch, plus a four-a-side Beavers v. Sparrows match if sufficient players were available. The men were on court, and the girls were in the gallery.

Now the fixture is verging on the baroque. It has become an all-action fives-fest, with a game of Singles for each player and featuring, for the fourth successive year, a Ladies’ IV. This year there was also a ‘friendly’ match for Ladies’ reserve pairs.

In the men’s Varsity Match, the Oxford VIII retained the Jock Burnet Trophy with a solid performance from an experienced team of players, well organised and led by Alex McGee. It was no walk-over, however, as Jeremy Manger’s Cambridge side put up some stout resistance, winning three of the eight Singles and four of the Doubles games in the bottom half.

The top Singles was a close one, with the light-blues’ Andrew Boyd digging in to win by four points against Varsity rookie Peter Hanton. Meanwhile Jacob Brubert, playing in his ninth (!) Varsity Match (7 for CU, 2 for OU), led a group of four Oxford men who each won their game 15-4, providing the bedrock of Oxford’s Singles success. It was left to the bottom two Cambridge players, Garella and Yass, to make their side’s Singles total respectable, but Oxford still led by 33 points at this stage.

Oxford confirmed their superiority in the Doubles, with the top two pairs (Bhushan & Hanton and Brubert & Whitham) winning all their games, although seven of the eight were well-contested. Below the line, the games were shared but Oxford won more points. All in all, a good Varsity Match: the better side won, but the losers were certainly not disgraced.

Oxford had the necessary strength in depth to see them through in the reserves match as well, with a sound Beavers side scoring an impressive victory over the Sparrows and retaining the ‘Fist of Iron’ trophy by a wide margin.

In the Ladies’ match, Cambridge fielded a thoroughly experienced IV which has had more than a hand in winning three previous encounters with the Dark Blues. Although Oxford’s Phoebe Thornhill won the top match against Cassi Henderson, the remaining Singles each went to Cambridge by some margin. The Light Blues also scored heavily in the Doubles: although they lost three of the eight games by a couple of points, the other games were won easily. Three of the Cambridge team are leaving this year, so rebuilding will be needed to give Oxford a game next time round!

The match was played with the new Wiseman ball, and it stood the test well. In size, speed and durability it seemed comparable to the G6, and I heard no criticism of it from any of the players. We are grateful to St. Paul’s School for their hospitality, and I would like to thank Sam Roberts and Peter King, as well as the Sports Centre staff, for their help in setting things up.

The match was supported once again this year by Pol Roger Champagne, and we are most grateful to them for their continued generosity. 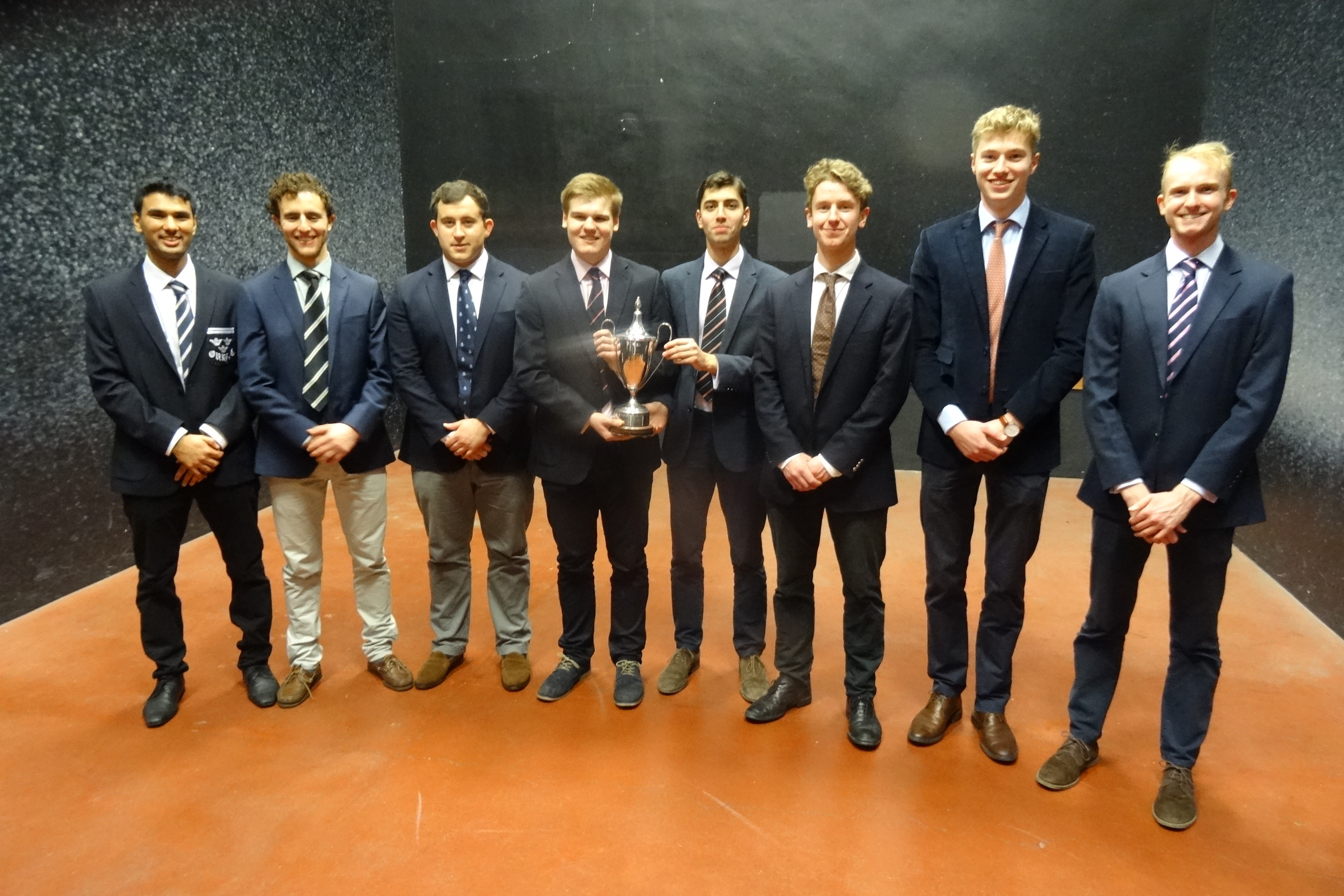