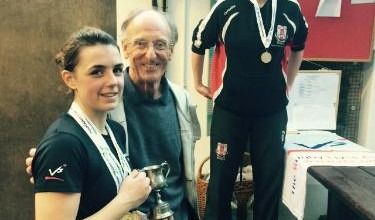 STOP PRESS: Tessa Mills achieved the Double at the Ladies Winchester Fives championships, winning the Bradfield Bowl with Kathleen Briedenhann, and then going on to beat her partner in “one helluva final” by 7-15, 16-14, 16-15 to win the Crayke Cup. It is Tessa’s first senior Singles title. For a flavour of the day’s events go to the Twitterfeed. (Full report and scores to come)

Meanwhile Bernard Atkinson writes:  We live in an age when marketing hyperbole seeks to make us believe that the ordinary is extraordinary. The culmination of the Ladies Winchester Fives tournament  soared above hyperbole, it was simply very special.

This does not mean that the whole day of fives was not memorable, for it was. The group of four youngsters from Christ’s Hospital, in training for the National School Girls’ Championships, and the young Russian entrant from Clifton who won a silver medal in the doubles final, all played their hearts out. They all showed a determination to justify why they were there and a psychological strength beyond their years. If the Battle of Waterloo was won on the playing fields of Eton, what future struggles will have been won on the fives courts at Winchester?

Denise Hall-Wilton could have been in no doubt that she has handed over the running of this tournament to a very worthy successor in Maddy Raynor. Maddy ensured that everything ran like clockwork in an atmosphere of harmony – and even I understood how the scoring of the round robin plate competition worked, a first for me, I confess – and she it was who took a major part in that thrilling culmination.

Just when we thought it could get no better, Tessa Mills and Maddy Raynor came on court for the second singles semi-final; we watched enthralled as Tessa took the first game and looked set to clinch the second, until, facing an uncomfortable deficit, Maddy began the process of reining in her opponent point by point. This terrier looked like worrying Tessa into a third game until, with the deficit almost gone, Tessa pulled out the last blast to take the match.

Surely, after such a gruelling semi, the final against Kathleen Briedenhann would be an anti-climax? So it seemed when, despite Tessa having taken an early lead, she seemed to succumb to tiredness and made errors which allowed Kathleen to take control and secure the first game. At this stage the outcome looked obvious and perhaps close at hand, but not to Tessa; she dug in and slowly climbed back, having found that the buttress could be an ally to raw power,  and emerged victor in game 2 at 16-14.

No lip-reading expertise was needed in the gallery to read Tessa’s thoughts about yet another game ….. but neither of these exceptional players was in a mood to concede. It must be said that with both players now tired, their determination seemed only to increase as another game of fine skill and athleticism got under way. One could only watch with awe how these players could still smile together at odd incidents as the points inched forward: no one dared to predict the outcome. But Tessa seemed to grow in confidence, even producing a couple of controlled drop shots amidst all the power play to secure the match at 16-15. By now everyone was mentally exhausted, but there was a clear winner in addition to the very deserving Tessa – that was the game of fives itself!

I came away thinking: This was not the ‘Ladies’ Game’, this was quite simply ‘The Game’. 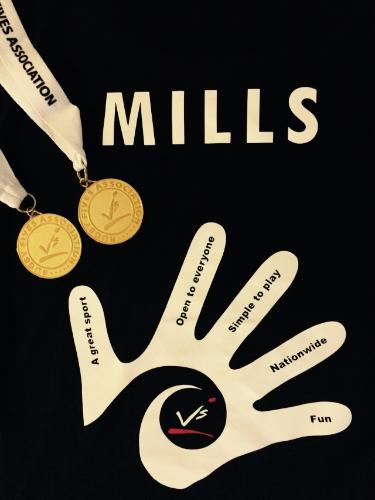 With a few last-minute changes due to injury and illness, it was with great anticipation that ten players took to the courts. We had some returning faces as well as a few new faces this year,  with players travelling from across the country: Kathleen Briedenhann and Tessa Mills from Eastbourne, Wendy Carling from London, Melanie Whitehead and Maddy Raynor from Devon. There was also a good entry of schoolgirls with Beatrix Crinnon, Phoebe Thornhill, Stella Saunt-Hills and Angelina Green all entering from Christ’s Hospital and Ekaterina Shilina from Clifton. The schoolgirls used this competition to gain experience in their preparation for the schoolgirls’ nationals in April.

The competition kicked off with the Doubles tournament. The first match saw the two Christ’s Hospital pairs take each other on; this was a very good match which allowed all four players to get used to the courts and the buttress. Crinnon & Thornhill, being the more experienced pair, beat Saunt-Hills and Green comfortably 15-3. They then went on to face Briedenhann & Mills in the semi-finals, where they put up an impressive fight and managed to consistently hit the buttress. This was not enough, though, and  Briedenhann & Mills went on to win 15-1, 15-2. Shilina & Raynor faced Whitehead and Carling in the other semi-final. This was a close contest with both pairs playing well, but it was Shilina & Raynor who eventually won 15-3, 15-4. Shilina & Raynor put up a big fight in the final, Shilina’s first. Both pairs demonstrated some great fives, but Briedenhann & Mills proved too strong and went on to win comfortably 15-1, 15-2. While this match was going on Crinnon & Thornhill, Saunt-Hills & Green, also Whitehead & Carling were battling it out in the Plate competition. There were some close and very competitive games, but it was Crinnon & Thornhill who came out victorious.

After the Doubles came the Singles competition. The first round saw Shilina and Thornhill play against each other;  this was a close contest with both showing determination, however it was Thornhill who managed to secure the win 15-8 to then go on and face Whitehead, where Thornhill’s winning ways continued.  The other matches saw Crinnion beat Saunt-Hills 15-4. Crinnion then faced Raynor in a match where Crinnion played some very good shots and showed good awareness and tactics, but fell short as Raynor went on to win 15-5.

Jess Whitehead from Blundell’s School, Tiverton kindly stepped in at the last minute to ensure the numbers worked for the Singles competition. She faced Green, who helped Jess find her feet on the courts. Green won this match and then went on to face Mills. Green played some very good shots, but could not match the experience of Mills, who went to win 15-3.

The Singles Plate competition was being played at the same time as the semi-finals; It was a round robin with Shilina, J. Whitehead, Crinnion, Green and M. Whitehead all battling it out, and it was Shillina who was victorious, winning all her matches.

The semi-finals of the main competition saw Thornhill face Briedenhann and Mills face Raynor. Mills and Raynor took to the courts first, but with the score refusing to move amidst a battle of serves it was looking to be a long match. Thornhill and Briedenhann hoping to watch some of the other semi-final soon took to the courts to start their semi-final, where Briedenhann dominated  to win 15-0, 15-1. The Mills v. Raynor semi-final saw the first game go to Mills 15-5; the second game looked like it was going to go the same way, but then Raynor, refusing to give up, started to claw the score back. Both players showed grit and determination, the match seemed never-ending. After an hour of play Mills eventually took the win 15-13.The spectators themselves looked exhausted and one was heard to say “I’ve not seen a match like that since Ellison versus Grant”. However, there was still one more battle for Briedenhann and Mills. How could the final live up to the previous semi-final? But it did, and much more. Briedenhann took the first game 15-7, with Mills playing well, but Briedenhann was looking fresh and rested, where Mills had had a hard semi-final under her belt. In the second game Briedenhann took the lead, but Mills, digging deep, started to rein her opponent  back in. Mills managed to use the buttress to her favour, catching Briedenhann out, to the take the game 16-14. So it was all to play for in the third and final game, the spectators were on edge, with both players demonstrating true sportsmanship and impressive ability. Mills took the lead and went 8-3 up, and it was Briedenhann’s turn to reel her opponent in to take the lead 13-8. Mills then managed to get the score even at 14-14. Everyone was mesmerised by this contest, not even daring to breath. The score then got to 15-15 with Briedenhann on match point. With both Ladies playing out of their skin, you would have thought Briedenhann had just managed to scrape through, but no, Mills managed to pull one out of the bag, a fantastic shot into the bottom of the buttress; all you could hear was the cry escape Briedenhann “Ohh, Tessa!”.  It was wonderful to witness such sportsmanship, with each player complimenting the other when a very good shot was played. An hour and a quarter after Mills and Briedenhann had first stepped onto the court, the final point was eventually won by Mills, who thus claimed her first senior Singles title. It was truly an unbelievable final to witness and one that I will never forget. Congratulations,Tessa!

Thank you to all the players who participated. Iit was truly a very enjoyable day of fives and it was lovely to see the young players improving so much throughout the tournament. I look forward to next year’s competition at Sedbergh School. 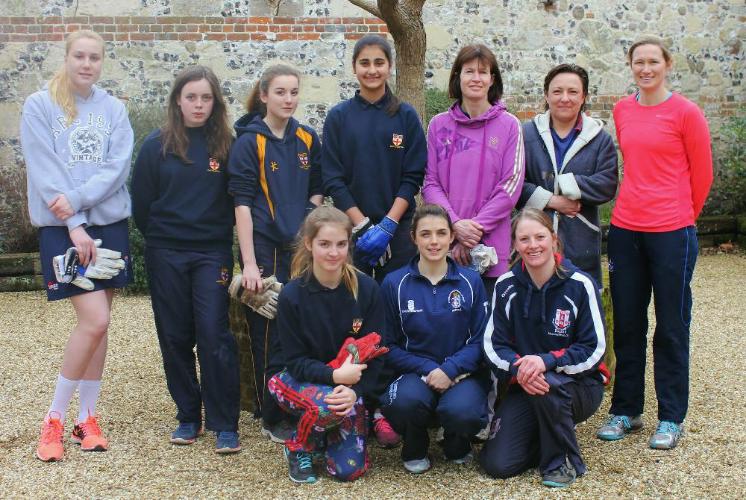 The Ladies at Winchester 2015