David Barnes reports: Thirteen pairs from seven schools entered for the Schools Winchester Fives Doubles this year and all enjoyed a thoroughly good dayʼs fives. It was encouraging to see two pairs from each of Malvern and Radley in the draw as well as three from Winchester, since this event was started fourteen years ago partly to cheer up the ʻbuttress boysʼ!

The first round saw generally clear-cut victories. The losers of these five matches went into a round-robin plate competition which resulted in some very competitive matches. Marlborough eventually emerged as the winners, just ahead of Radley I.

Meanwhile, the quarter-finals of the main draw saw the unaccustomed early elimination of all three St. Paulʼs pairs, leaving the last four places to Winchesterʼs first and second pairs, Derby Moor and Malvern I. The quarter-final losers then had a topsy-turvy plate competition of their own – the Super Plate – , resulting in a win for St. Paulʼs III.

Of the eight players on court during the semi-finals, six had already got their names on Schoolsʼ Rugby Fives trophies at some level, so it was a high-class field. Winchester I had a solid two-game victory over Derby Moor, directing their attack more purposefully than their opponents. The second semi could have gone either way, but after Malvern I and Winchester II had each won a game, Nelson, one of the Malvernians, pulled a muscle and the Wykehamist pair came through in the third.

The final was a good one, lacking only a little of the tension that can characterize an interschools match. Winchester I (Song and Kullavanijaya) won the first game with something to spare, but the second game was much closer. In the end, harder hitting probably made the difference, but the retrieving and persistence of Kidner and Younger was admirable. And by the way, all four will be back next year!

Many thanks to Winchester College for the use of their courts, now 105 years old and still playing well, and to Giles Munn and Bob Dolby for their help in the organisation of the event. 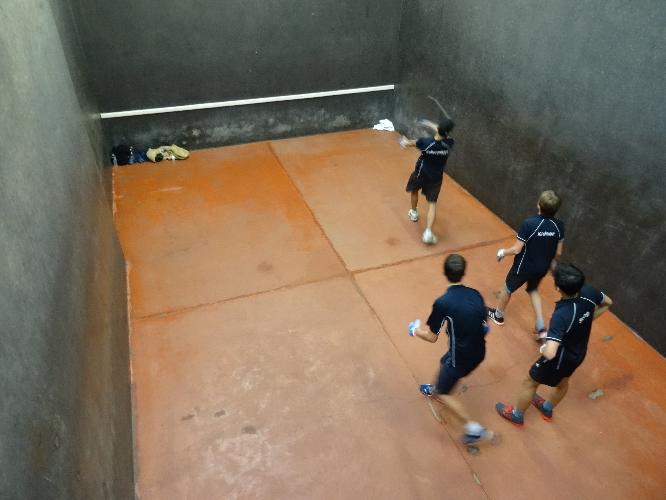 The Winchester finalists in action