STOP PRESS: It was the same four players who figured in the last stages of the Singles and in the final of the Doubles: Will Ellison, Dan Grant, Ed Kay and Dan Tristao. As it was last year. But not entirely the same outcome.

In the Singles Will Ellison won a tough three-game semi-final, for him a successful rematch of the recent London Open final, against Ed Kay, but then Will went on to lose in the final to a perhaps fresher Dan Tristao, playing all the shots in his repertoire. It was Dan’s 40th victory in an open  event.

Will and Ed teamed up later in the day, however, to resist a ferocious challenge from Bristol University pair Ollie Arnold and Theo Parker in a three-game doubles semi-final, but were then able to beat the two Dans in a two-gamer. It was Will’s 67th open victory and Ed’s 7th

The Plates saw perhaps the youngest ever Singles victor in Ben Kirwan from Oxford University, who beat Giles Munn in the decider, and on Sunday Nick Geere reached his second Doubles Plate final in a fortnight, this time winning the non-existent silverware. He was partnered by Ben Beltrami against the Derby Moor pair of Richard Christie & Aaron Wheatley.

A fantastic entry of 28 singles players and 16 doubles pairs contested the West of England Championships this year, which culminated in top seed Dan Tristao reclaiming the singles trophy he last won in 2015, and the combination of Will Ellison & Ed Kay defending the title they won last year.

The large draw meant that a number of high quality matches took place in the first round, notably Pete Hanton’s closely-fought match with Peter Winzeler. Hanton won in two, fending off a second-set comeback and Winzeler’s many drop-shots to earn a second round match vs. fourth seed Dan Grant. The younger members of the draw also showed promise, schoolboy Addie Chai playing well in defeat by James Tilston, and Oxford first-year Ben Kirwan showing his powerful shot-making in his loss to Theo Parker.

The second round saw the arrival of the top seeds, with a fresh-looking Dan Tristao made to work hard by Bristol’s Tom Watkinson, a new addition to the fives-playing bandana-brigade. There were two three-game matches: Matt Shaw defeated Ollie Arnold in a tight 8th/9th seed encounter and Dave Butler overcame an in-form Sam Russell, having lost the first set 12-11. Sam has now been close to upsetting higher seeds at all three of the recent tournaments, establishing himself as a major threat in the singles draw.

Ed Kay has been in great form of late to win both the London and Yorkshire Opens, and his ruthless streak continued with a 11-0, 11-1 demolition of Butler in the quarter-finals. Dave admitted to not knowing how to play Ed, prompting the invaluable advice from second seed Will Ellison: ‘Just hit it into the nick.’ Apparently fives is as simple as that. Will demonstrated his ground-breaking approach to the game with a 11-1, 11-2 dispatching of Julian Aquilina. The other two quarter-finals were tighter affairs, Tristao wearing the scars of battle (on his arm and neck) to better Shaw in two games, whilst Grant proved too consistent for Ben Beltrami.

The result of all this was that the top four seeds reached the semi-finals, where they delivered two nail-biting matches; both Tristao and Ellison came from a set down to prevail. Ed Kay showed the form of recent months to take the lead against Will, but ultimately experience told, with the fast Clifton courts suiting Will’s hard-hitting. Having watched this semi-final unfold, Dan and Dan timed their entry onto court perfectly to ensure peak viewing figures. Grant raced out of the blocks to take a one-sided first set, his powerful serve preventing Tristao from making an impact. However, DT’s short-game and retrieval proved too much for DG, and he won a tough third game to 7.

Whilst the main draw was played out, a high-quality plate competition got underway. In total there were 28 matches played, a testament to the depth of talent and enthusiasm on show. An exhausting group stage fittingly culminated in an exhausting final, finishing way after 7pm, with youngster Ben Kirwan triumphing 16-14 over Giles Munn in front of an appreciative crowd. This allowed us all to go to enjoy a fantastic meal, after what had been a long day of singles; thanks must go to the West of England Club’s Ben Smithson for organising this!

As the doubles commenced on Sunday morning, Will and Dan started the singles final, competing for a title they have shared since 2010. A high quality first set see-sawed to 10-all before Dan clinched it, and the second followed a similar path, with Will’s powerful hitting finding its match in Dan’s relentless accuracy. Dan came through 11-8 – his 40th open win.

The highlight of the doubles first round was Tristao & Grant’s epic versus the unparalleled experience of Stewart Watson & Tim Lewis. The Exeter pair’s enviable combination of guile and flair almost stole the second set, though the four-time previous champions came through, 12-10.

Aquilina & Hanton played well to defeat the Cambridge pair of Boyd & Shaw in two close sets, and otherwise the top seeds progressed to the semi-finals comfortably. This saw the defending champions Kay & Ellison come up against top Bristol pair Arnold & Parker, who had shown their form in a one-sided quarter-final win over Butler & Gareth Price. On their home courts, Ollie & Theo won the first set with their powerful, hard-hitting game, though could not match their opponents’ consistency as the match continued. Ed & Will came through a tough final set, winning to 7 to progress. The other semi-final saw Tristao & Grant comfortably see off Aquilina & Hanton in two games to set up a rematch of the 2016 final.

Meanwhile, the doubles plate had reached its climax, with representatives from the West of England Club, Derby Moor and Marlborough Town on show. The final saw Nick Geere & Ben Beltrami beat Aaron Wheatley & Richard Christie in three games, having lost a tight first set to 10.

With a hardy group of spectators remaining, the main final began. Immediately, Will’s power and Ed’s consistent pressure proved difficult for the Dans to manage, even with DG’s winners and DT’s variety of shots. With few errors from the defending champions, it was hard to see a different result to the final, although the top four ranked doubles players once again delivered in their quality of play. Will’s 67th and Ed’s 7th open victory was secured, the 11-4, 11-5 score-line belying a closely-fought match.

Thanks must go to Clifton College for the use of their courts, Kevin Brice for the smooth running of the plate competitions, and all the entrants for what was a fantastic weekend of fives. As with every year, it was fine preparation for the BUSF Championships later this month, and the National Singles Finals, taking place at the Y Club in December. Judging by the standard of the singles played in Bristol, it promises to be a hard-fought tournament! 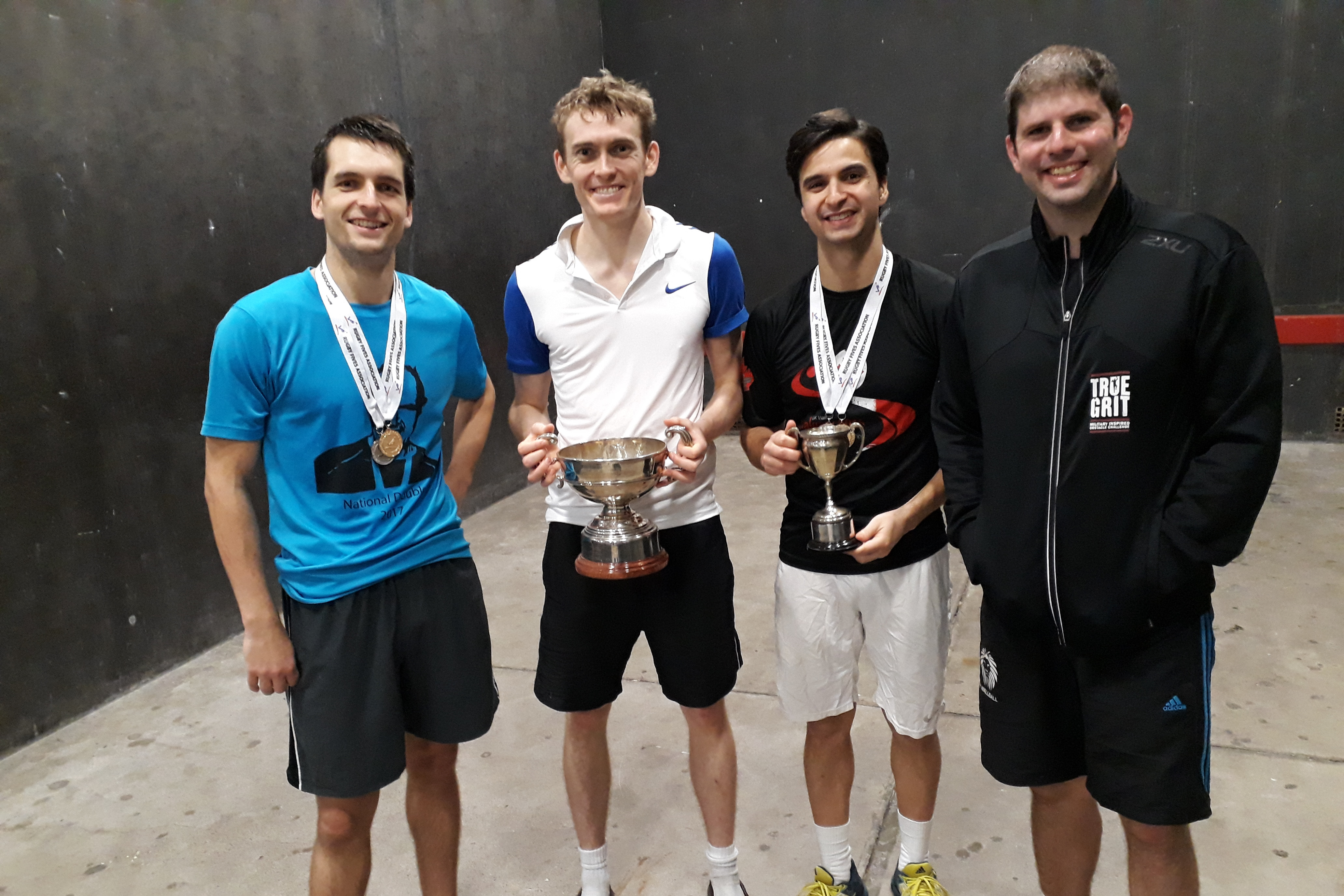 The Big Guns at Bristol 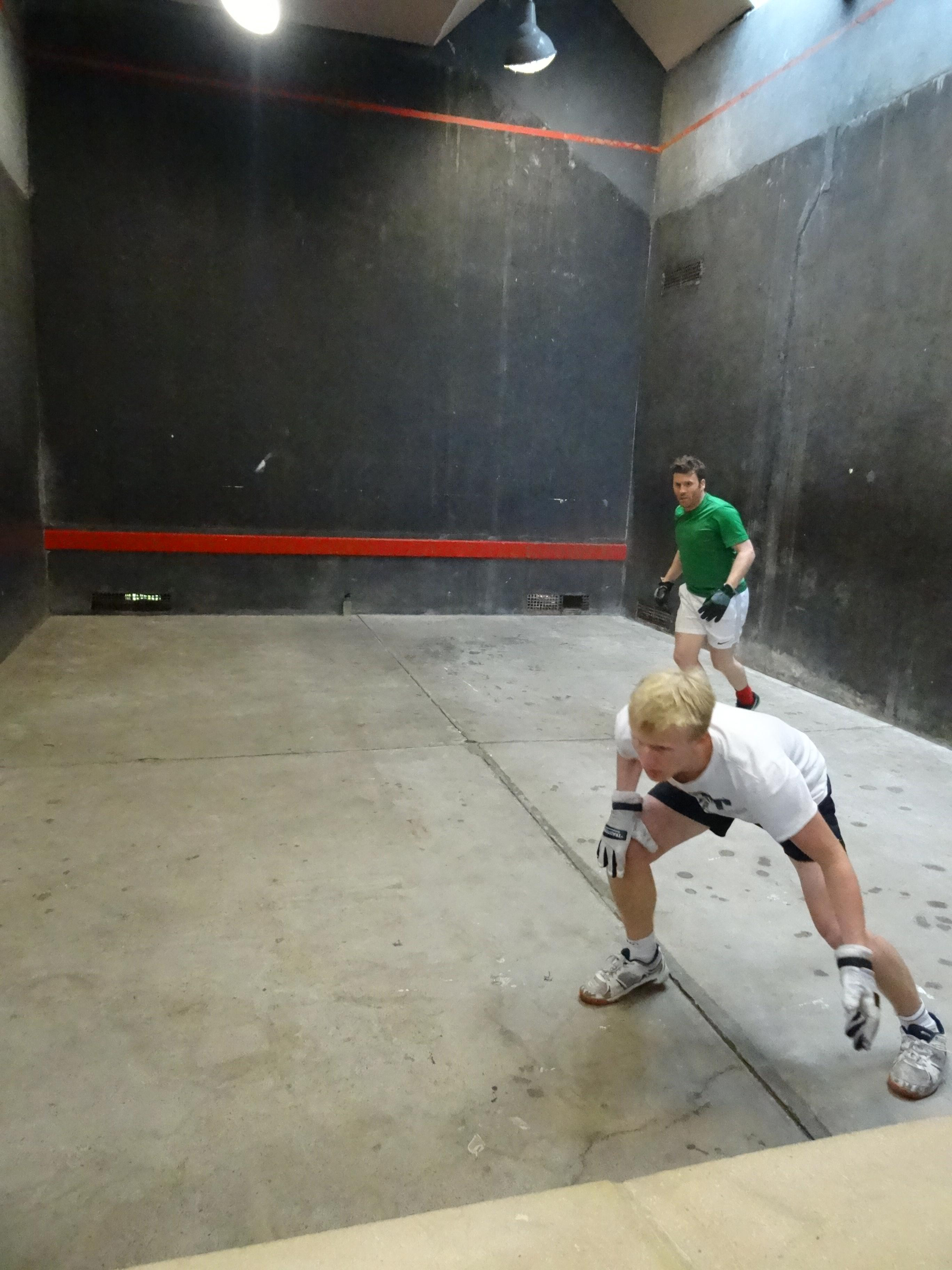 Action from the Singles Plate Final