Lewis Keates should be doing the Pools this week: he clearly knows how to pick a winner! Will Ellison in the Mate’s Plate; now Hamish Buchanan in the DM Doubles. Or perhaps it’s time to lower his handicap.

9 pairs contested this year’s “Premier Fives Event in the East Midlands” [Grem McIntyre]. The smart money looked to be on Buchanan & Keates (Hamish won the second such competition back in 2005) or Richard Christie with Bob Sandie, who’s won it twice. Three-time winner Anthony Goodwin playing with Martin Robinson looked a good outside bet, as did any of Lawrence Taylor & Brian Nithsdale, John Halligan & Mark Kiteley, and Aaron Wheatley & Stuart Kirby.

In the first round Lewis and Hamish got off to a gentle start against John Hawke & Hasan Rehman, while Anthony & Martin developed an effective understanding by the end of their first match, against Lawrence & Brian. Stuart & Aaron, now playing regularly at Club nights and coaching too, had a bit too much in the bank for Mark & John, while Richard & Bob got warmed up with a preliminary match against U15s Dean Ali & Vishal Singh, then more serious stuff against Hasan & Jai Singh.

The semi-finals were the usual close encounters, with Hamish & Lewis coming though after a very tight second game against Anthony & Martin, while Richard & Bob managed to come out on top of a predictably dour struggle against Stuart & Aaron, winning 15-12 in the third.

The final looked comfortable for Hamish & Lewis in the first game but then they had to dig deep in the second, defeating Richard & Bob 16-14 to win the pitcher and saucer.

In the Plate, played as a round robin, John Halligan & Mark Kiteley won all four of their games to claim the boules but not without a close shave against Lawrence Taylor & Brian Nithsdale. For once both boules were available for presentation!

With the courts enclosed food and drink were provided on site, the atmosphere as congenial as ever. Huge thanks have to go to Stuart Kirby, who took over organising the event from the absent Brian Kirk. Above all, the day was an appropriate way to mark the end of a 13-year project to refurbish and enclose the courts. 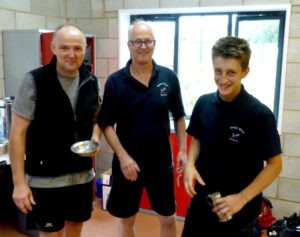 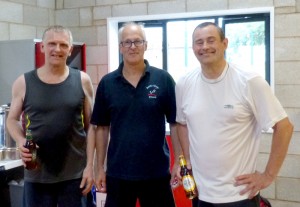 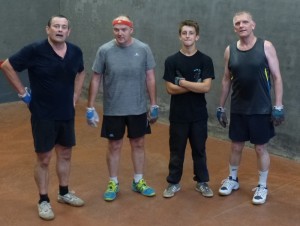 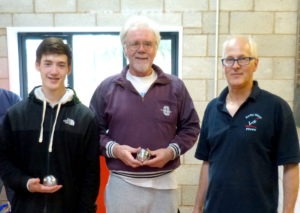 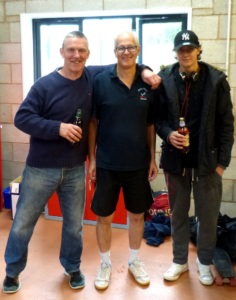 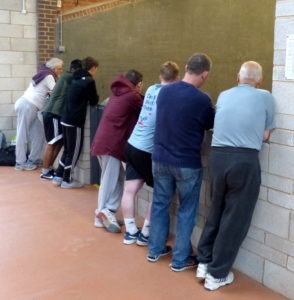 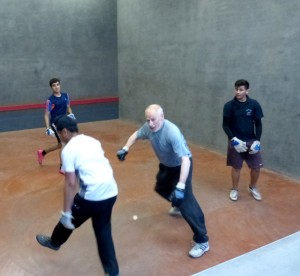 John Hawke using his experience against some youngsters with questionable positioning!