As largely expected Ed Kay and Matt Shaw contrived a clean sweep of Singles and Doubles titles at this year’s British Universities Rugby Fives Championships. In the Singles final Ed Kay beat last year’s Cambridge captain Ben Beltrami, now at London City Law School, as he had done the previous two years. Matt Shaw went one further in winning the Doubles title for the fourth year in a row, this time partnered by Ed Kay. The previous three years Matt’s partner had been Ben Beltrami.

The Plate Singles title went to Sam Russell (London Law BPP) for the second time in three years and the Plate Doubles contest was won by Tom Owen & freshman Dan Whitham from Oxford.

A full report by organiser David Gardner can be found after the full scores below. It was David Gardner’s 58th time of organising an event he himself started in 1960.

David Gardner writes:  Marlborough College was again the gorgeous setting for this year’s championships. Not only are the facilities for Fives extremely good, but it is so close to the High Street that all are able to enjoy the delights of this most attractive of ancient market towns.

For the statisticians here are the facts: the number of entries was again good, with 38 entries for the Singles and 20 pairs for the Doubles, with twelve universities represented. Compared with 2016, this was marginally up on numbers but slightly down on universities.  There are still a lot more individuals hibernating around various educational establishments and we must try and get them involved in future events!

A total of 56 matches of ‘proper fives’ were played (best of three to 15) whilst there were 63 one-game matches in the Plate events — all this in a grand total of 25 hours of play on four courts, over two and a half days, quite a tall order for both organisers and competitors. Perhaps that is why players consumed something like 150 litres of water in that time. If nothing else is a record, then that certainly must be!

At the top end, the quality of play was often quite remarkable, whilst in the middle order there was a very competent standard, which gave rise to many tough and hard fought matches.  Whatever the level, all competitors seemed to enjoy their matches, and the Plate singles, with some 29 entrants, attracted some very keen competition!

Selecting particular matches or players is always difficult at such an event, but I think that mention must be made of the Singles final, which was special, to say the least.  The score sheet tells the story, but the phrase ‘the best final ever’ was heard from a number of viewers.  Such a statement would probably be disputed by players from every era who would consider theirs as ‘the best’.  I can only say that, having watched all 58 finals, I might just agree with the comments on the BUSF 2017 final.  Congratulations to both players, Ed Kay and Ben Beltrami, who, in their third consecutive clash, gave us a match to remember!

The Doubles was perhaps less eventful but still of a very high standard. The hopeful Bristol pairing of Ollie Arnold & Theo Parker eased comfortably through to the final, as did their opponents, with Matt Shaw partnered this year by Ed Kay. However Ollie & Theo fell at the last hurdle to the superior accuracy and skills of the Cambridge pair, who never allowed the Bristolians to take charge of the match. Special mention must be made here of the super doubles play of Matt, who cruised through to his fourth consecutive title.

Plate honours were spread around the country with Bristol’s Inigo Ackland & Tom Watkinson involved in singles semis, and Sam Russell from the London BPP Law school taking the title for a second time from Rob Whitehorn of Exeter.  The Doubles semis involved Durham and Cambridge, but it was Oxford, represented by Tom Owen & Dan Whitham, who succeeded in defeating the combo pairing from Sheffield & Manchester, Julian Hanton & James Smith.

The event concluded with the Presentations to the winners by RFA President Bernard Atkinson and an additional bit of ceremonial: presentations made by Ed Kay and the President to the Organiser, to mark his 58 years overseeing the event.

Finally our thanks, yet again, to Marlborough for hosting the event; to staff at the College for their invaluable assistance with arrangements;  to David Barnes for masterminding the historical displays; and to Chris Horrocks for his untiring efforts both prior to and during the event. 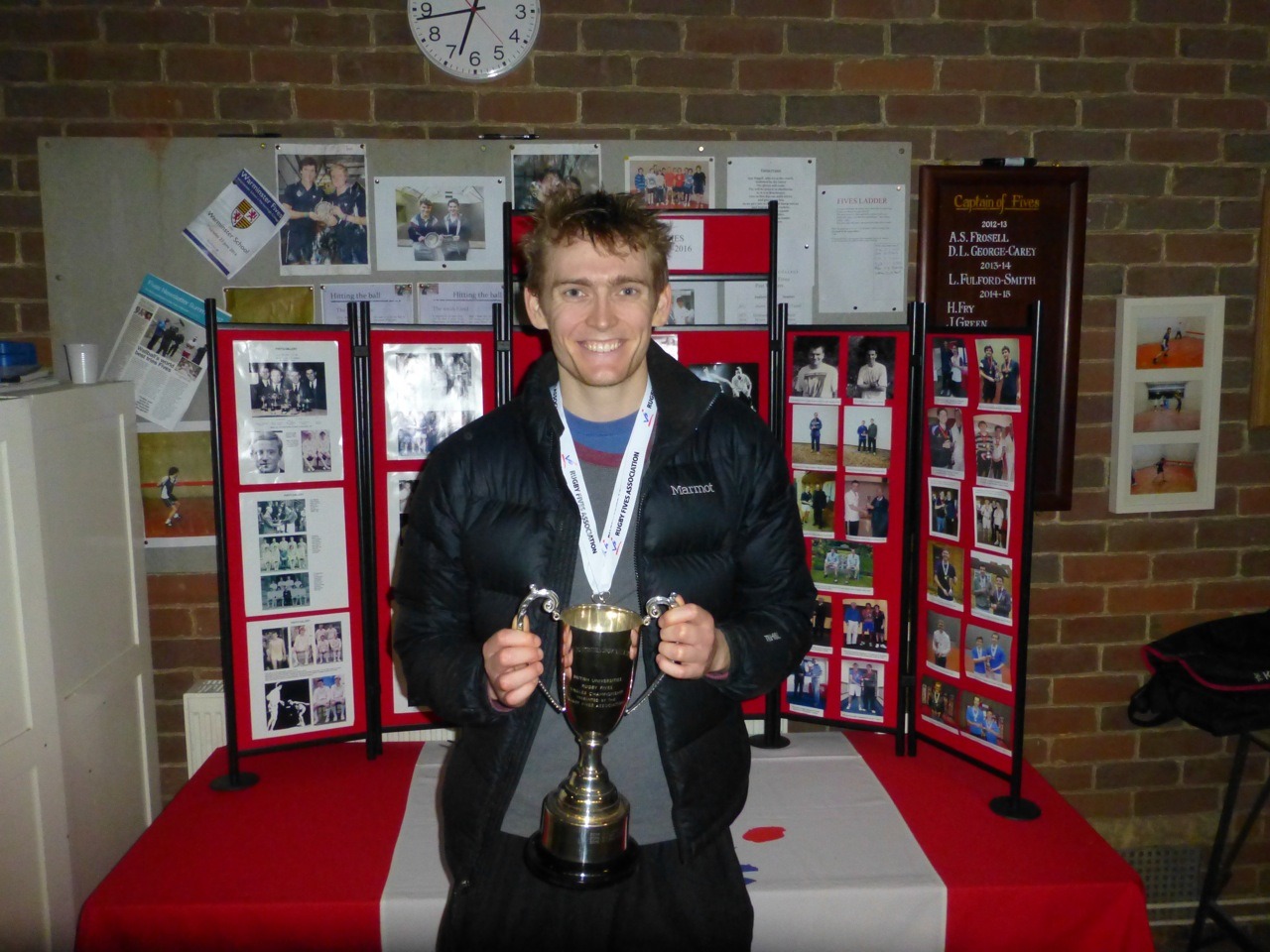 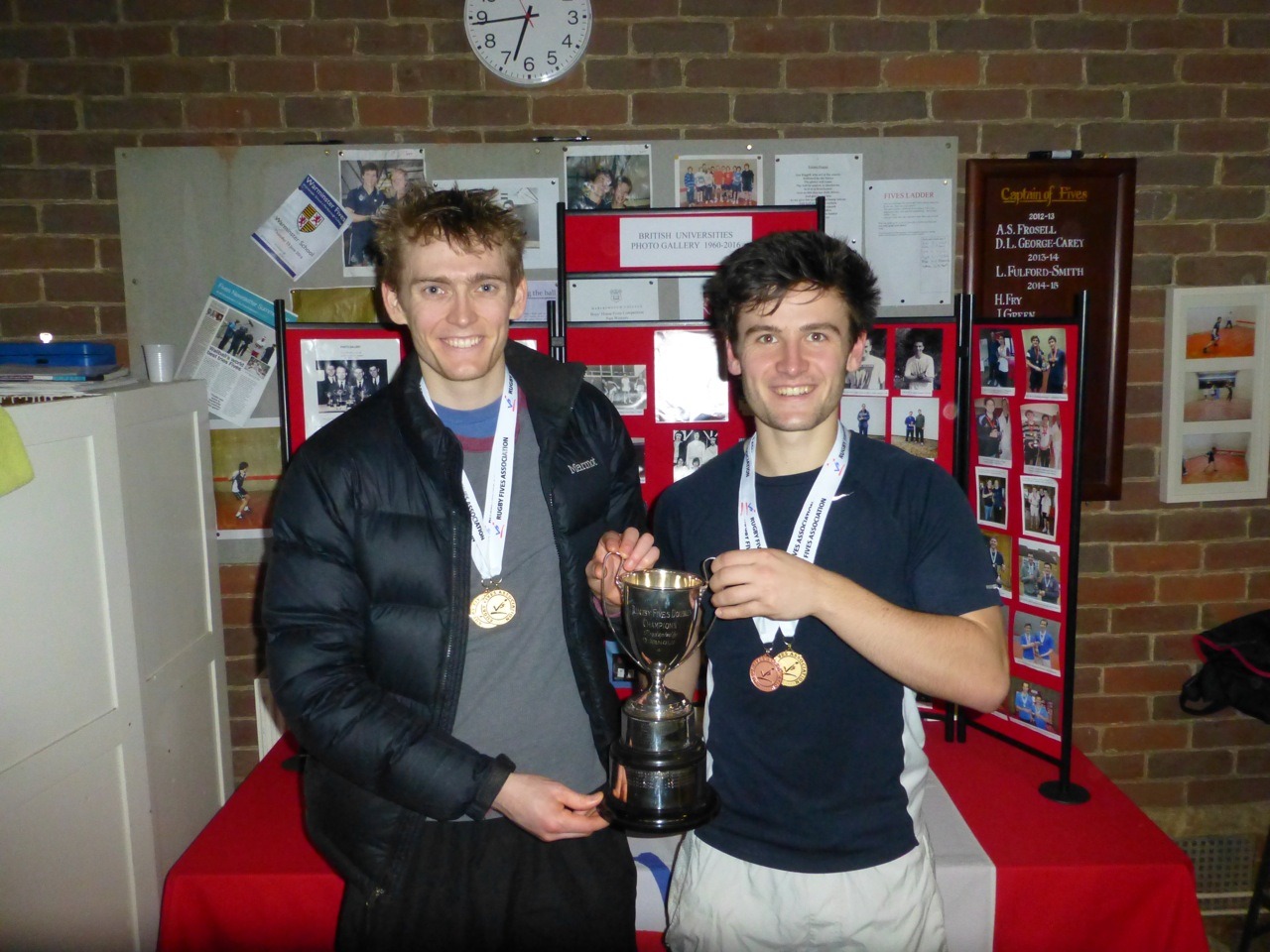 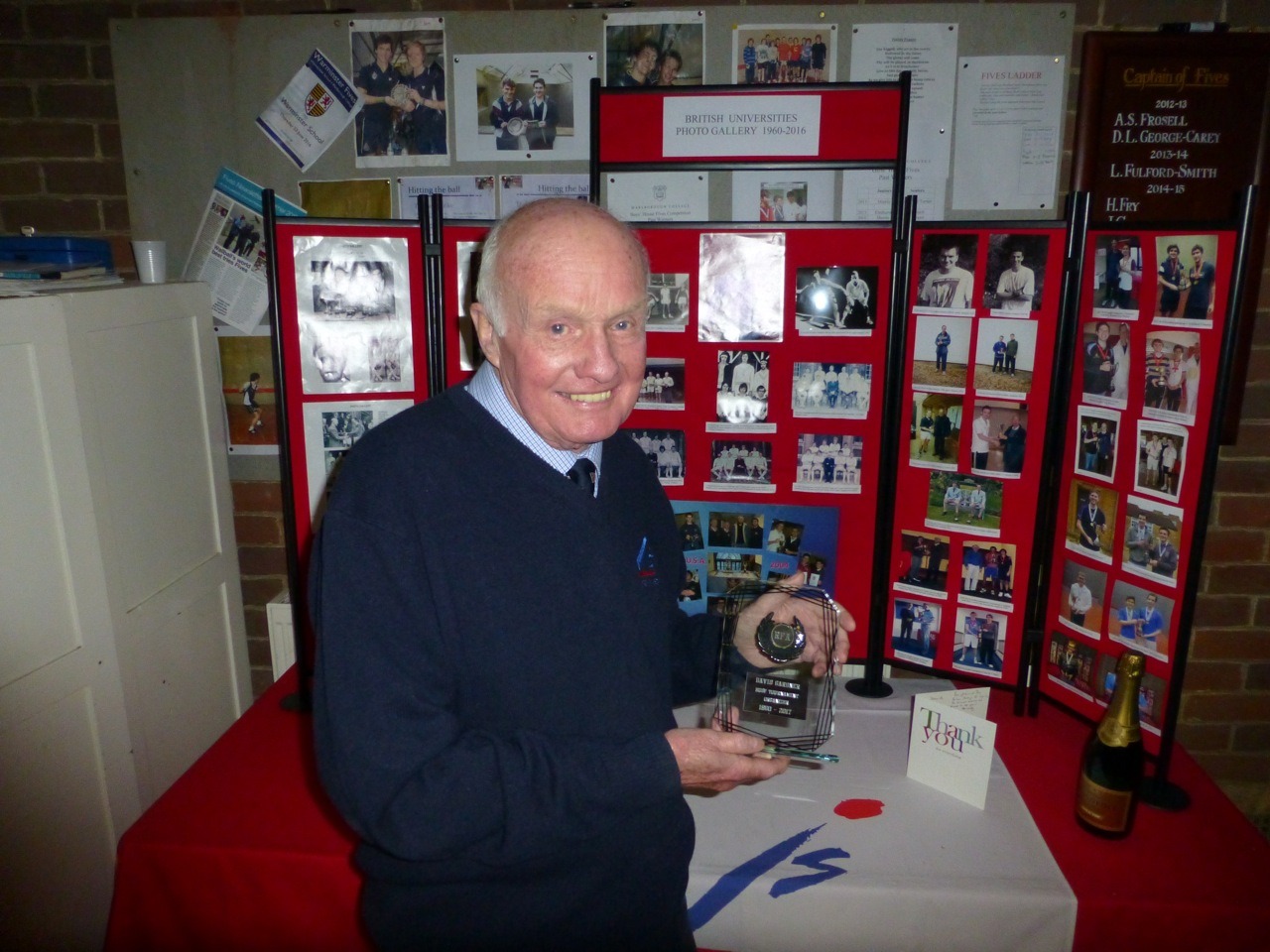 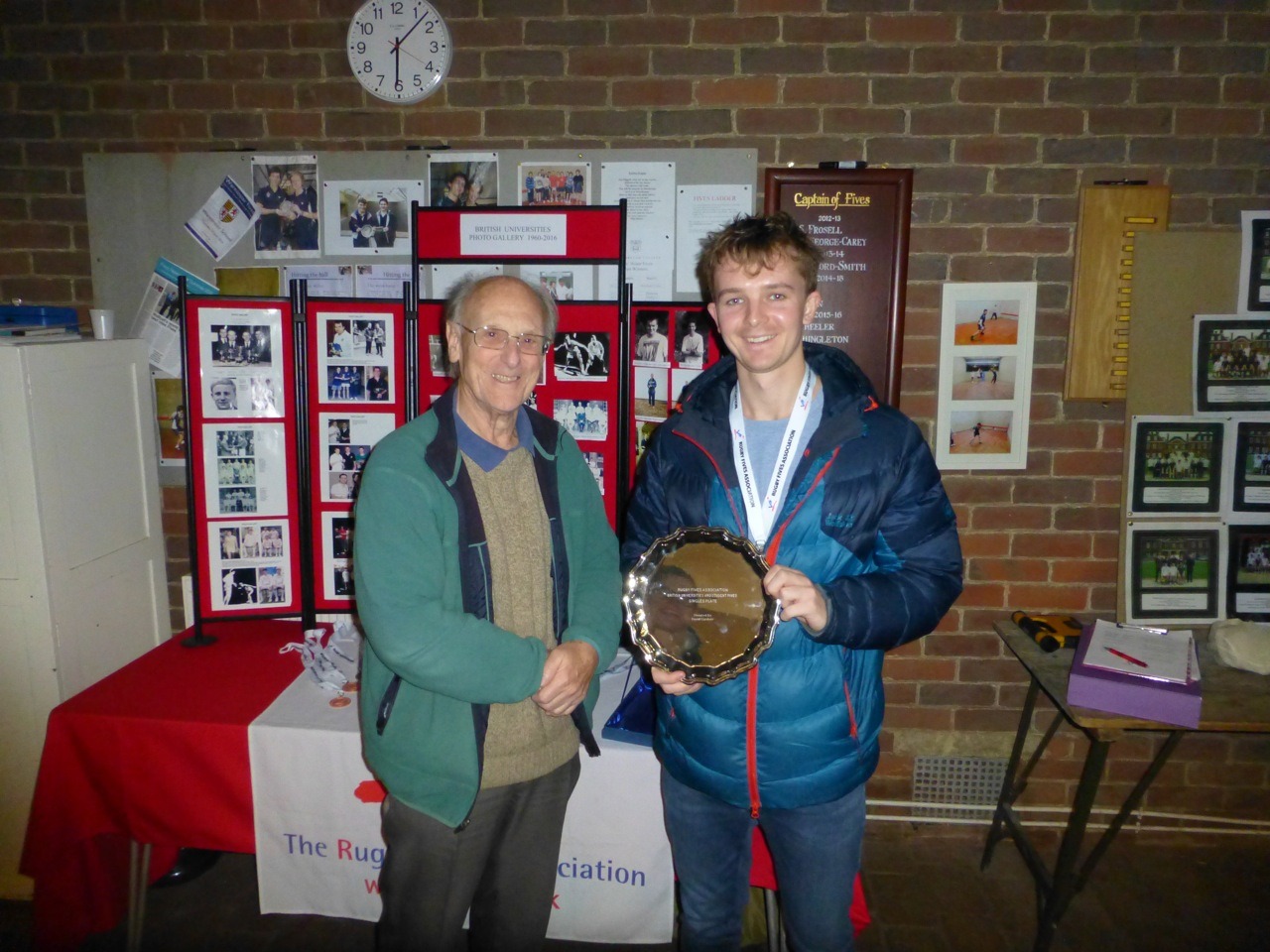