STOP PRESS: Ian Fuller retained both his Singles title and his Doubles crown with Dave Hebden. In the Singles final against Neil Roberts it was the story of cross-court angles and delicate dropshots from Ian doing the damage, while in the Doubles against Stuart Kirby & Neil Roberts it was a case of the defending champions forcing a string of errors out of their opponents once the initial attacks had been weathered. It was Stuart Kirby’s first appearance in a national final; goodness knows how many Fuller, Hebden and Roberts must have been in!

Brian Kirk reports: The Vintage (over 55’s) Rugby Fives Tournament was held on Sunday 20th March on the new courts at the Cambridge University Sports Centre. The format for the day was Singles in the morning with six players, followed by Doubles in the afternoon with seven pairs.

The Singles began with two pools of three players fighting for the chance to play in a semi-final and then a final. Ian Fuller forged ahead in pool one, comprehensively winning both his matches against Messrs. Phil Atkinson and Tony Hamilton. The second pool sported new entrant, Neil Roberts, who won both his games against Stuart Kirby and then Dickie Warner. In the semi-final Ian beat Stuart and Neil Tony, leading to a much anticipated final. Despite Neil’s court dominance, Ian’s consistency and accurately placed shots took their toll, with him winning relatively easily by 15-9. Who is capable of breaking Ian’s dominance in this category, we speculated.

The Plate final between Phil Atkinson and Dickie Warner proved one of the most engaging matches in recent history. Phil took an early lead 8 to 2, which he extended to 13-5, but effervescent Dickie maintained his cool and slowly chipped away at Phil’s lead until they were neck and neck. Game points came and went, with Phil having at least three chances to claim the trophy. Dickie recovered shot after shot from Phil and eventually pounced, winning 16-15. Phil claimed boredom overcame him but the crowd speculated that Dickie’s persistence suggested he must be the Stig in disguise.

The Doubles kicked off with two pools of three and four pairs. The seedings proved accurate, with Ian Fuller & Dave Hebden beating Atkinson (B) & Passey and Sandie & Sutcliffe in pool A and new pairing Neil Roberts & Stuart Kirby beating Warner & Hamilton, Atkinson (P) & Kiteley and finally Kirk & Blakeley. Again the seedings proved correct, with Fuller & Hebden beating Warner & Hamilton in the first semi-final and Roberts & Kirby beating Sandie & Sutcliffe in the second. This led to a much anticipated final between champions Fuller & Hebden and  new pairing Roberts & Kirby, Stuart celebrating his first ever national tournament final after many years of dedication to our sport. The final started cagily, with each pair winning hard fought points. At 4-all Ian and Dave pulled out a lead, consolidated their position and began to forge ahead as Neil and Stuart tried to up the pace but began making unforced errors. Ian and Dave maintained their cool, played the percentage game, with Dave retrieving particularly well, and gained point after point until they reached the winning post. Another Doubles title to their names.

The Plate final proved less competitive, with the guile of Bernard Atkinson & Andy Passey overwhelming the efforts of  Chris Blakeley & Brian Kirk, the former new to the rigours of over 55’s competition and the latter still trying to relearn Rugby Fives after playing Eton Fives for the last five months (can someone please tell him to stop trying to hit the buttress: that does not work in RF). Excuses, excuses!

And no Odd Ode this year from our resident Cyril Fletcher! 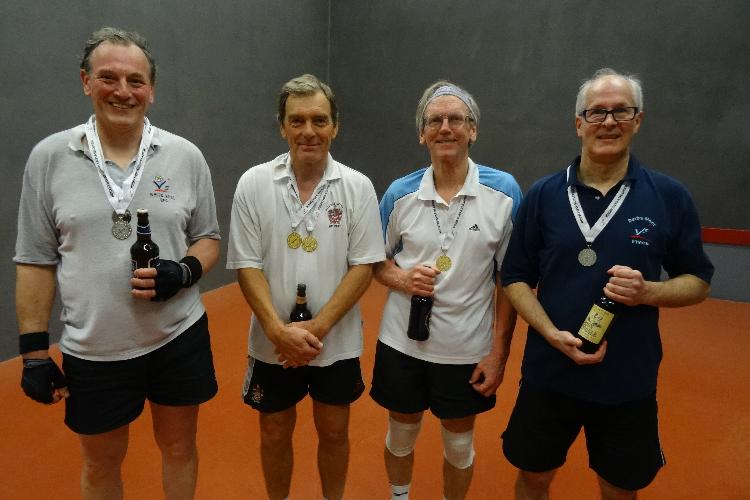