STOP PRESS
Cambridge University confirmed its position as the strongest Rugby Fives-playing university by taking a clean sweep of the major titles at this weekend’s championships. The singles title was won by Ed Kay – finally winning the championships after being runner-up on more than one occasion – but runner-up Ben Beltrami didn’t go away empty-handed, teaming up with fellow Light Blue Matt Shaw to retain the doubles title they won last year.
[See below for organiser David Gardner’s report] 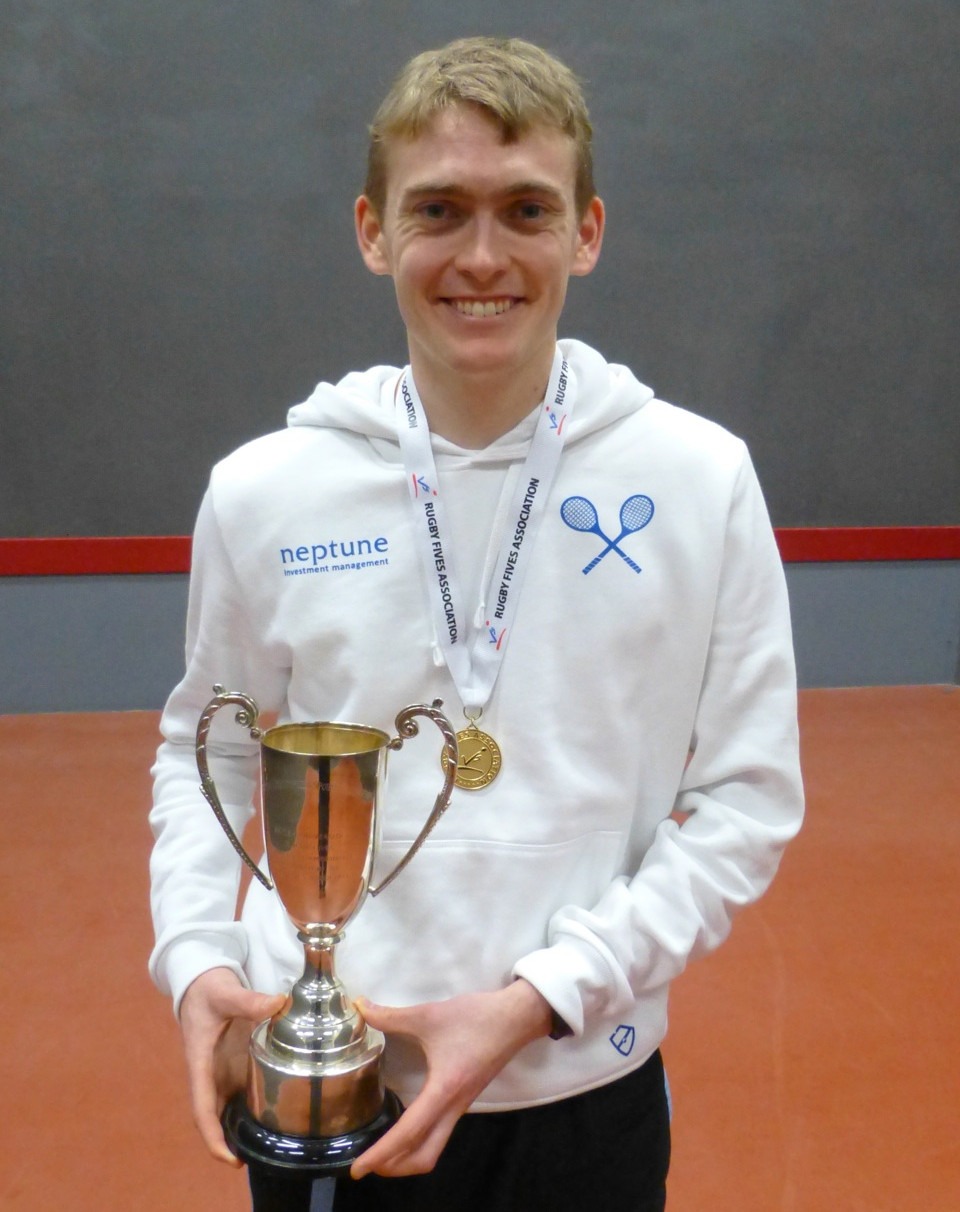 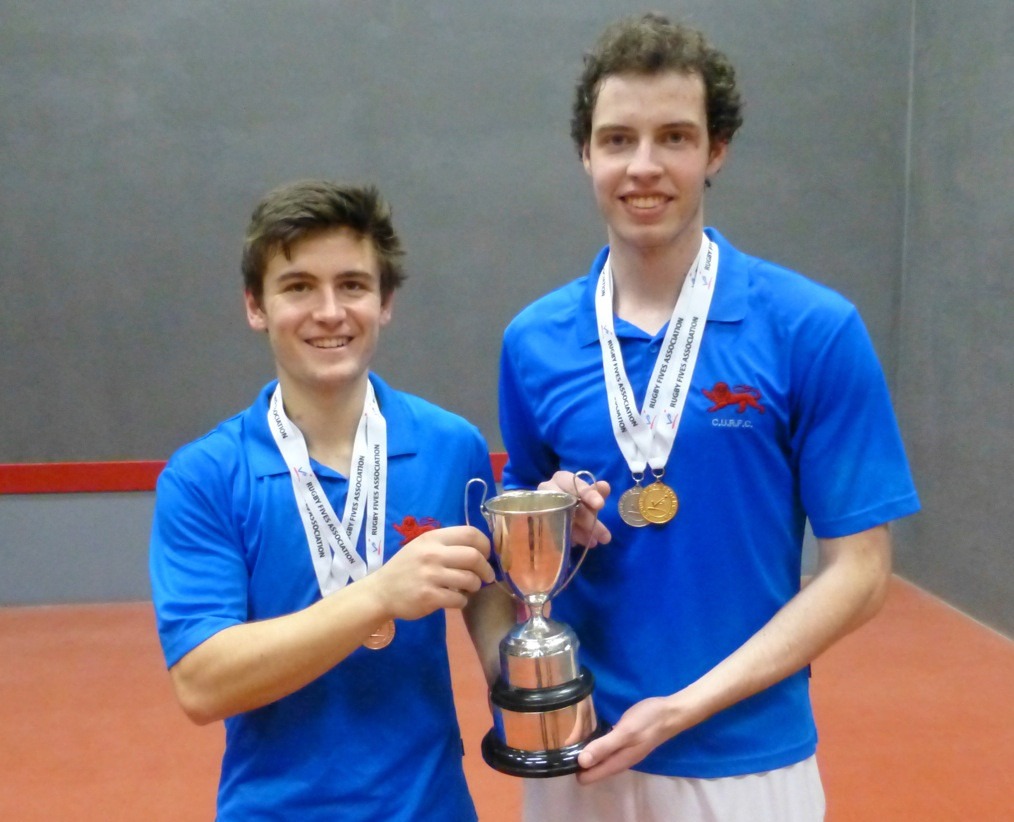 David Gardner gives his take on BUSF 2015: The recent University Championships concluded on Sunday, with resounding victories in both the Singles and Doubles Finals for players from the host university, Cambridge.

The Nr. 1 seed, Ed Kay, proved to be too strong for fellow Light Blue Ben Beltrami, when, after faltering a little at the start, he took total control of events.  As the ‘heir apparent’ to the title, after coming second to Dan Grant last year, Ed was not really stretched throughout the tournament and thoroughly deserved his victory in the final.

In the Doubles Ben was partnered by Matt Shaw. As holders of the title, Ben & Matt were rightly seeded at the top and were not seriously challenged in the early rounds nor in the final where they forced too many errors from the Bristol combination of Theo Parker & Ollie Arnold who had had a tough battle in the semi-final against the Cambridge 2nd pair of Kay & Quarry.  In the final the Cambridge 1st pair thoroughly deserved their victory, with more positive shot selection and powerful hitting.

The Plate events were more evenly balanced, but in the end both Singles and Doubles titles went to Durham, with Sam Russell winning the Singles against Oli Quarry, while Ben Ashraf & Adam Wordley took the Doubles, defeating Chris Davey (Birmingham) and his partner Christian Blackaby from Durham.

Although the tournament was originally planned as a dual-venue event, with the first day’s play at Oundle as well, the entry was a little smaller than usual and we were thus able to condense play onto the three courts at Cambridge in two long 11- and 10-hour days of exhausting play for both players, spectators and organisers!  However, it was well worth the effort in order to be able to take advantage of the superb new facilities for players and spectators alike.  It also proved to be much easier for organisers to keep a closer watch on things and ensure that courts rarely, if ever, remained empty for more than a few minutes.

Our first venture onto glass-walled courts was undoubtedly a huge success. However, whilst there were so many excellent aspects to the week-end there was also a less pleasant side: we were hit by one or two bouts of LAS, the adult disease which has sadly hit many senior fives events over the last few decades (Late Arrival Syndrome!)  This led to enforced withdrawals from some events and further irritation for patiently waiting opponents and also for organisers when objections were raised – and turned down. Ah well, such is the life of an organiser in the modern day!

Sadly, too, the Finals Day proved to be rather a ‘damp squib’: continuous play was not possible because the programme got so well ahead of schedule that both Plate Finals could be played on the Saturday.  Other contributory factors were that, I am delighted to report, the first shots of the main Singles final were played a full two minutes before the match was scheduled to start and the match only lasted about 40 minutes. This was followed by an extremely long gap between the two finals, made greater by the late arrival of one player due to ‘double booking’ his morning activities!

We may well have to look at this aspect of event planning in the future.

As always, there are thanks to give, as these events do not happen without a lot of time and effort by many unpaid workers  The efforts, enthusiasm and co-operation of the Staff at the Sports Centre were enormous and deserve the grateful thanks of the RFA. David Barnes must be singled out for his continuous effort pre-event, his superb historical displays and non-stop organisation during the tournament; likewise Chris Horrocks for his constant effort in ‘masterminding’ the plates; and Ed Kay, who gave helpful comment at the pre-planning stage and great assistance during the championships – when he was not playing either Fives or Real Tennis!

Finally, of course, our thanks go to RFA President Bernard Atkinson for travelling from Lymington to Cambridge for the day to present the trophies.