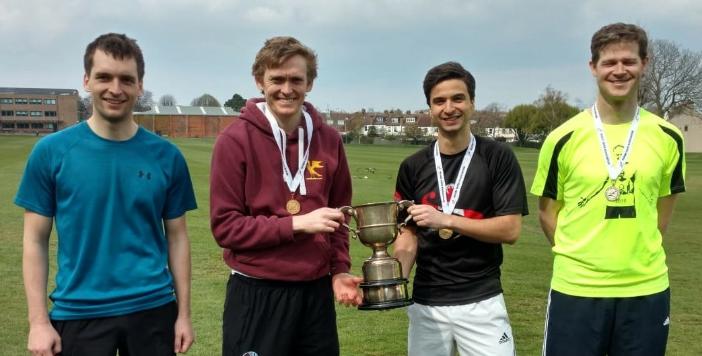 STOP PRESS: Ed Kay won his first National Doubles title, partnering defending champion Dan Tristao, in a match against Charlie Brooks & Will Ellison that went to three games. For Dan it was his 4th title and for Will it was his 10th appearance in the final.

Organiser Hamish Buchanan reports: There were a number of firsts for the final of this year’s Cyriax Cup. The primary one noticed by the select few who have witnessed this event in recent years was the influx of spectators in the gallery, provided from the players participating in the wonderfully conceived inaugural Mixed Doubles competition happening the same day. The secondary, an unfortunate power cut at the Alleyn’s courts that threatened the playing of the final, or at least it would have rendered a somewhat dimmer spectacle to those viewers present. Fortunately the organiser, with help from a member of the gallery, a long extension lead and a screwdriver, managed to get the lights back on. Thirdly, and more appositely, Ed Kay won his first National Doubles title in partnership with three-time winner Dan Tristao, beating former champions Charlie Brooks and Will Ellison in a scintillating three-game final.

Ed was the man under pressure in the early stages of the first game as Charlie and Will set out to test his resolve under the intensity of play found only in National Doubles finals, where rallies are rarely shorter than 20 shots and often 50 plus. With some outstanding retrieval and a determination indicating a desire for the long haul, Ed and Dan came through the early exchanges with parity and after three or four exquisite winners from Ed moved into a 9-5 lead. And although they were less than half way through the first game the die had been cast and they held the lead to win 15-10.

Charlie and Will, having won the title four times previously, were well aware that a strong start was essential in the second game and they duly delivered with a string of winners, added to a couple of errors from their opponents and established a 6-1 lead. The game ebbed and flowed, but the lead was never relinquished, and even after a late fightback the match was levelled at 1-1.

The standard of play was at times breathtaking, brilliant retrieval became the norm, great nicks and sublime dropshots were not good enough to win rallies. Still, as is so often the case in a game of Fives, the errors outnumbered the winners, but at this level of play errors are not of the hebdomadal club standard. (NB. that is to say weekly, rather than pertaining to the ten-times Doubles champion and rankings guru Dave Hebden.)

An insightful example of the personal level of performance from the players was given at the start of the third game when Will produced a well disguised hard hit cross court shot from deep in the left corner. The ball flew from the right hand wall onto the front and then into the left wall nick and Dan finding himself, most unusually, caught out stranded on the back wall, exclaimed in desperation to his partner ‘You! You!’. Ed, alive to the threat, sprinted forward covering for his partner, with great athleticism and balance he retrieved the almost certain winner in time and then…. dumped the ball into the bar.

‘Not good enough!’ he bellowed in frustration. Those in the gallery looked on with raised eyebrows. ‘It looked pretty darn good to me’, said one young spectator, clearly astonished that what had appeared to be an unstoppable winner was in fact retrieved with enough time for the ensuing mistake to feel like a bad miss.

The deciding game continued without either pair gaining more than a two or three point advantage and the scores were level at 9-9. With the players tiring, mentally as well as physically, the error count of the finalists started to rise, but it was noticeable that Dan resisted this trend, continually applying pressure on his opponents and with the addition of one or two timely winners he and Ed moved to 14-9 up and Championship point. Charlie and Will were not going down without a fight and they staved off 7 match points, but as they were unable to score more than one point in return they eventually succumbed to the eighth Championship point and Dan and Ed deservedly took the title.

As usual the match was played at the highest level of sportsmanship, with offered lets sometimes refused and apparently clean pick-ups called down; the honesty on display was inspiring.

Twenty-four hours earlier eighteen pairs lined up at the start of the tournament and although the top eight seeds progressed through, there were a couple of close matches. At the top of the draw an all-student clash saw Cameron Low and Archie McCreath squeezing past local pair Julian Hanton and Ben Kirwan, in an enjoyable, hard hitting encounter. Meanwhile at the bottom end of proceedings there was a far more attritional battle with Christian Blackaby and Sam Russell fighting back from game point down to win 16-14 against the scratch pairing of multiple National Singles and Doubles champions Hamish Buchanan and James Toop. The second game was much easier for the seeded ex-Durham pair.

The only tie to upset the seeding committee came in the quarter-finals when fifth overcame fourth as Dave Butler and Tom Watkinson beat Julian Aquilina and James Tilston in three games. After the more experienced James and Julian won a tight first game, Dave and Tom changed tactics for the second game, with Dave taking the left. They became the more steady pair and this allowed Tom to find some easy power hitting from the right, catching a somewhat rusty James and Julian rather flat. The second and third games went to Dave and Tom convincingly.

The highlight of the day for some was the late arrival of the Dan-Grant-designed tournament T-shirt. The man himself was absent this year, but the colour of the shirt certainly made up for the lack of sunshine usually enjoyed at Alleyn’s on this weekend. Another popular part of the day is the spread of food available, it is no surprise that hungry Fives players enjoy good bread with cheese or ham and the occasional chewy sweet for energy, or in Dave Butler’s case, a somewhat more than occasional handful of confectionery. It was far more surprising to learn, however, that the same man with the sugar cravings is also addicted to brie, showing alarming withdrawal symptoms when confronted with only a cheddar option for his afternoon sandwich!

The semi-finals were hard fought and hard-hitting affairs, with the top seeds showing just enough of that class that flowed freely the next morning to ease through close first games and effectively break the resolve of their opponents.

The plate competition had nine pairs arranged in three groups with the winners and best runner-up through to the semi’s. Three strong pairs emerged, the aforementioned Hanton and Kirwan, the scratch pairing of Henry Jefferies and Lewis Keates and the hard-hitting local pair of Tim Hebblethwaite and Jonnie Heath, with the best runner-up spot taken by the improving Chris Davey and Joe Sumner. In Chris’s case the big improvement came after a trip to a local sports shop for some new shoes that allowed him to be vertical instead of horizontal for the majority of each rally. Ben and Julian outlasted Tim and a tiring Jonnie 15-12 and Henry and Lewis had too much power and speed for Chris and Joe.

The final was of high quality and thoroughly entertaining for the few spectators left at the end of a long day. With all four players striking the ball hard there was little thought of much front court action, but that did not detract from some fine doubles play in a one-game final from which it was impossible to pick the winner. The lead changed hands many times until 10-10, at which point the more experienced pair of Julian and Ben managed to dovetail good retrieval with attacking play for three or four consecutive rallies to forge ahead and win the plate 15-10.

Our thanks to Alleyn’s School for the use of their courts and changing facilities on both days. 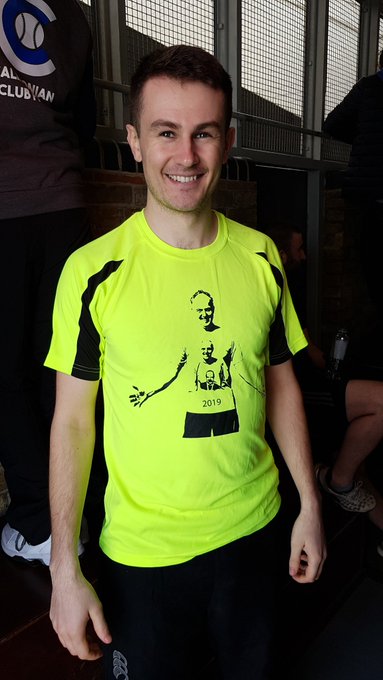 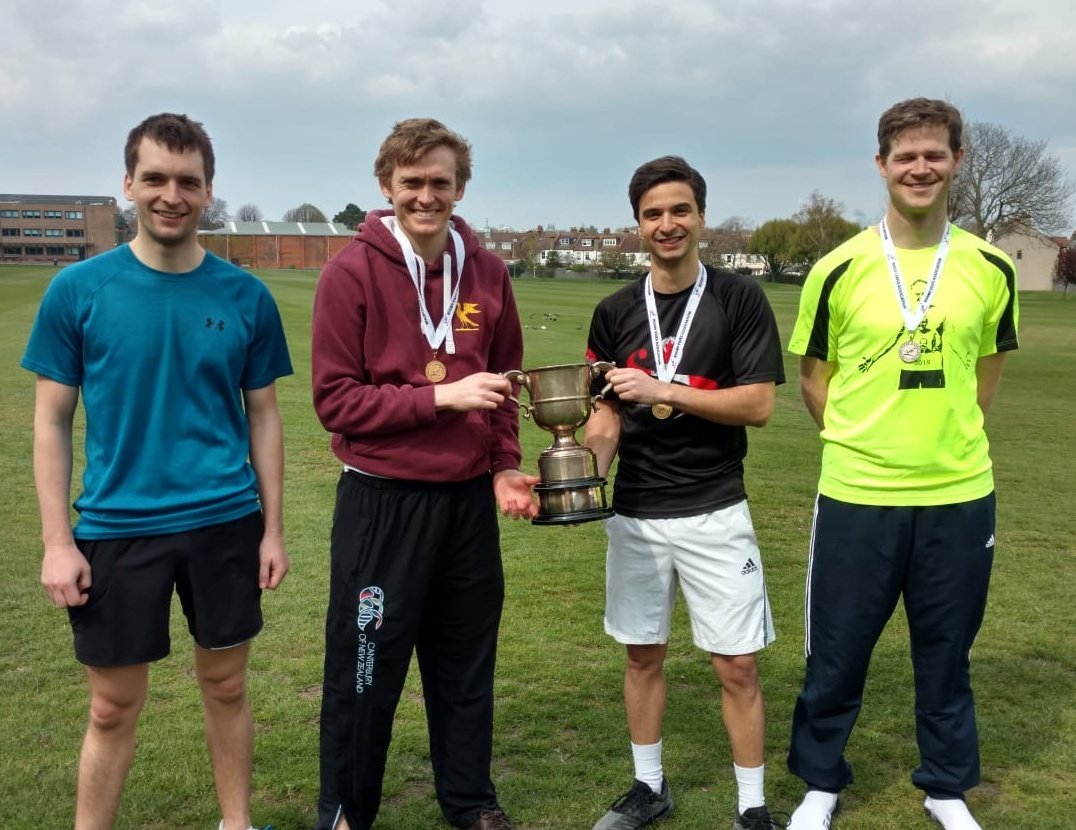 The Plate winners — AOBs both! 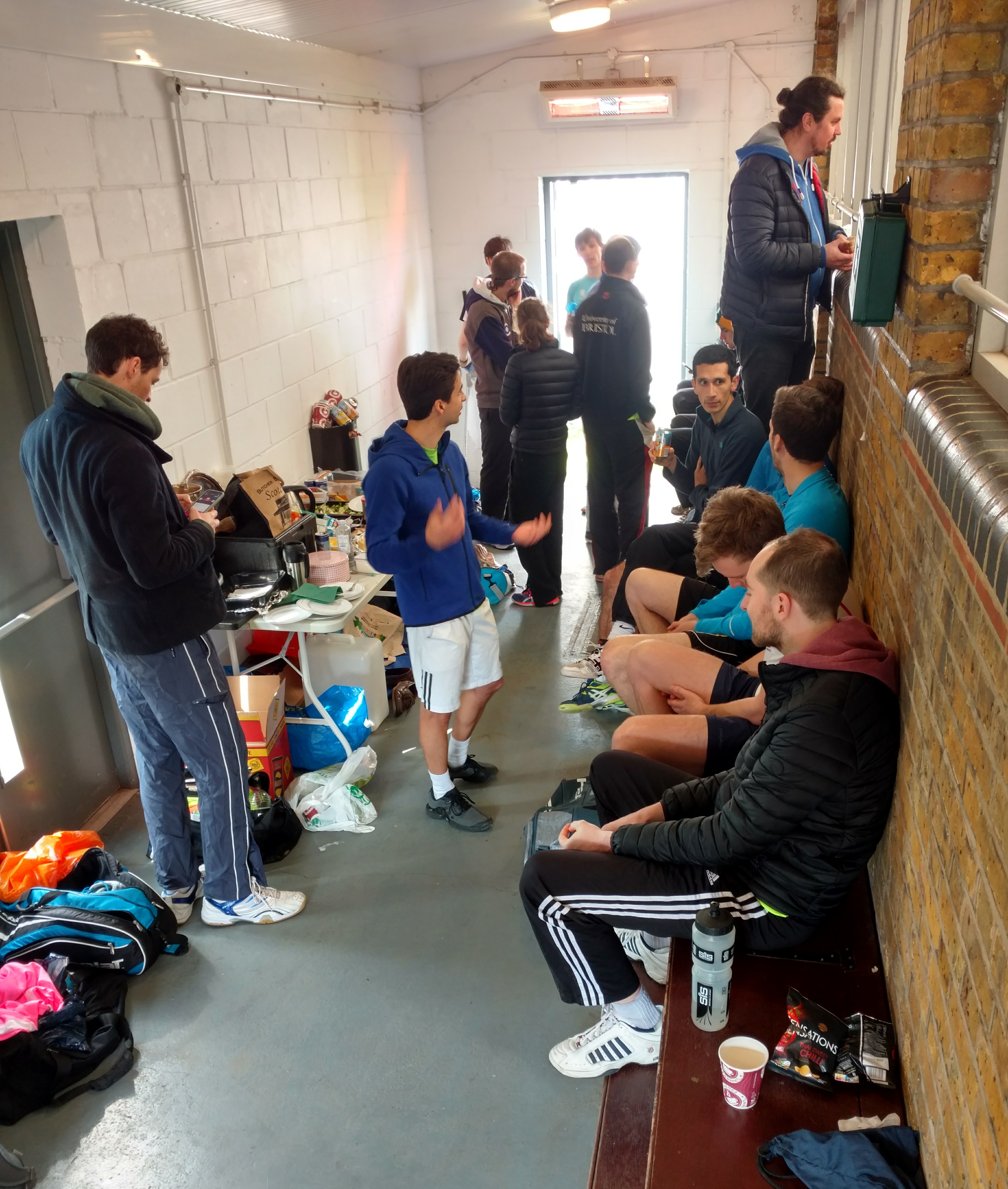