STOP PRESS In yesterday’s high-quality final defending champion Dan Tristao clinched his 5th National Singles title by beating National Nr 1 Ed Kay 15-9, 16-14. Dan’s relentless retrieving and audacious drop shots from mid-court were major factors in denying Ed a first title. Ed threw everything he had at his opponent, especially in the second game, where Dan had to fight back from 10-14 with a series of game-saving serves. Ollie Arnold meanwhile won his third National Singles Plate. 31 players had entered the qualifying rounds, 12 of whom eventually joined the four players with automatic qualification for these final rounds at St Paul’s.

Organiser Charlie Brooks reports: Dan Tristao retained his National Singles title, beating Ed Kay in another final of supreme quality. For the second year in a row, Ed pushed Dan to his limits, forcing game ball in the second game, but fell agonisingly short. Dan’s ability to relentlessly move his opponents to every inch of the court was apparent throughout the tournament and he was a deserving winner of his fifth crown.

The tournament had got off to an early start on Saturday, with all 6 courts in use by 9.30. Fierce competition ensued immediately, especially the customary tense encounters in the middle of the draw. This ended with 3 of the top 8 seeds failing to reach the quarter finals, with Theo Parker, Tom Watkinson and Matt Shaw taking their places. Theo just about held on in the first game against top Scottish qualifier Richie Murby (6) before an easier second; Tom’s match against Andrew Boyd (8) was the other way round – a relatively straightforward first game with a close second; Matt was handed a far easier path when Julian Aquilina (7) was forced to withdraw after only a few minutes with a recurring back injury.

The pick of the first rounds, however, was Ollie Arnold v Dan Grant. An expectedly hard-hitting affair saw Ollie fly out of the blocks and take the first game against the 5th seed. Dan came back and stormed through the second. The decider was closer, but Dan always had the upper hand. A three-gamer in the first round, but thanks to the style of both players, a mercifully short one for the organiser!

Onto the quarters, where two matches stood out. Unsurprisingly, 4th v 5th seed was the closest, as Ben Beltrami took on Grant. Ben showed both sides of his game as he played impeccably in the first, using power, precision and his unrivalled wingspan to great effect, but let inconsistency take over in the second (Dan also played better to be fair). He was then back to his best in game 3 to reach his first ever Nationals semi-final.

The highest quality affair, though, was between Tristao and Shaw in the bottom half of the draw. Matt, fresh from his 5-minute first round, was able to match Dan for much of the contest with an appreciative crowd willing him on. In both games, he fought toe to toe with the defending champion before Dan tightened the screw to pull clear.

Elsewhere, Watkinson had a fast start against top seed Kay, but wasn’t able to maintain the pressure, and Ed pulled away to a comfortable victory. In the final quarter, Will Ellison used his extensive experience to overcome Theo in convincing fashion.

As with last year, Ed dropped few points in his semi-final, while Dan was made to work much harder by Will. In a cracking first game, Will snuck through 15-13, and an upset looked on the cards. These two have had many a fine battle in the past and the spectators were being treated to another. In the second game, Dan went up a gear, dictating play and forcing Will into a huge amount of work. This continued into the third, where Will also upped his level, but in the end didn’t have enough to counter Dan.

Then came the showpiece finale. As they showed in the earlier rounds, few players can live with Dan and Ed, and those on the balcony were left in awe as they raised their game to another level. Their pace of play is breathtaking and range of shots spectacular. They both have an equal willingness to take risks for the chance to sap opponents’ energy, which is countered by each others’ anticipation and seemingly impossible retrieval — their speed around the court is phenomenal. Dan emerged victorious, 16-14 in the second, but Ed is only a gnat’s whisker behind.

The plate was robbed of two players through injury (Julian’s back and Richie’s bruising), but nevertheless demonstrated the strength in depth of the players. There was Hanton representation in both groups: Peter was joined by Lewis Keates, who was flying the flag for Derby, and Ollie Arnold, whilst Julian took on Andrew Boyd and James Tilston.

In this second group, there was a tantalising prospect of it having to be decided by fewest blackguards served with the players being so evenly matched. James Tilston emerged as group winner, with his unique combination of flair and power, beating both Boyd and Hanton J. Ollie met him in the final — after overcoming the disappointment of such a close first round, he topped the other group despite Keates and Hanton fighting him all the way.

Whilst James couldn’t maintain his fine run of form, Ollie continued where he had left off in the group stages. He came onto court in determined mood and left with his third Plate victory in five years. The second game showed glimpses of being a classic; there were times when James’ guile had Ollie stranded, but he couldn’t produce the killer shots often enough and Ollie took full advantage.

For those who are interested in statistics Dave Hebden has sent the following observations and information:

In achieving his 5th victory Dan Tristao moves into 3rd place in the list of all-time winners, with only Wayne Enstone (23) and James Toop (6) ahead of him.

St Paul’s still have just the two winners of the Jesters Club Cup (Tristao and John East). Only two schools can claim more than two champions: Alleyn’s (6) and St Dunstan’s (4).

Over the 81 events since 1931, 27 players have won the National Singles, from 16 different schools (or Club in the case of the Manchester YM). Click here for further details

National Singles ages: The average age of Jesters Club Cup winners is now 29.9, with Dan’s recent win at age 31 having pushed this up a fraction. However, before the Wayne Enstone era, the average age of the 34 winners was just 24. Post Wayne, the average age across the 24 events has been 33.5. People staying fitter and staying in the game for longer, I suppose. Amazingly 20 of the 22 events between 1986 and 2007 were won by a player over 35 (six distinct people). 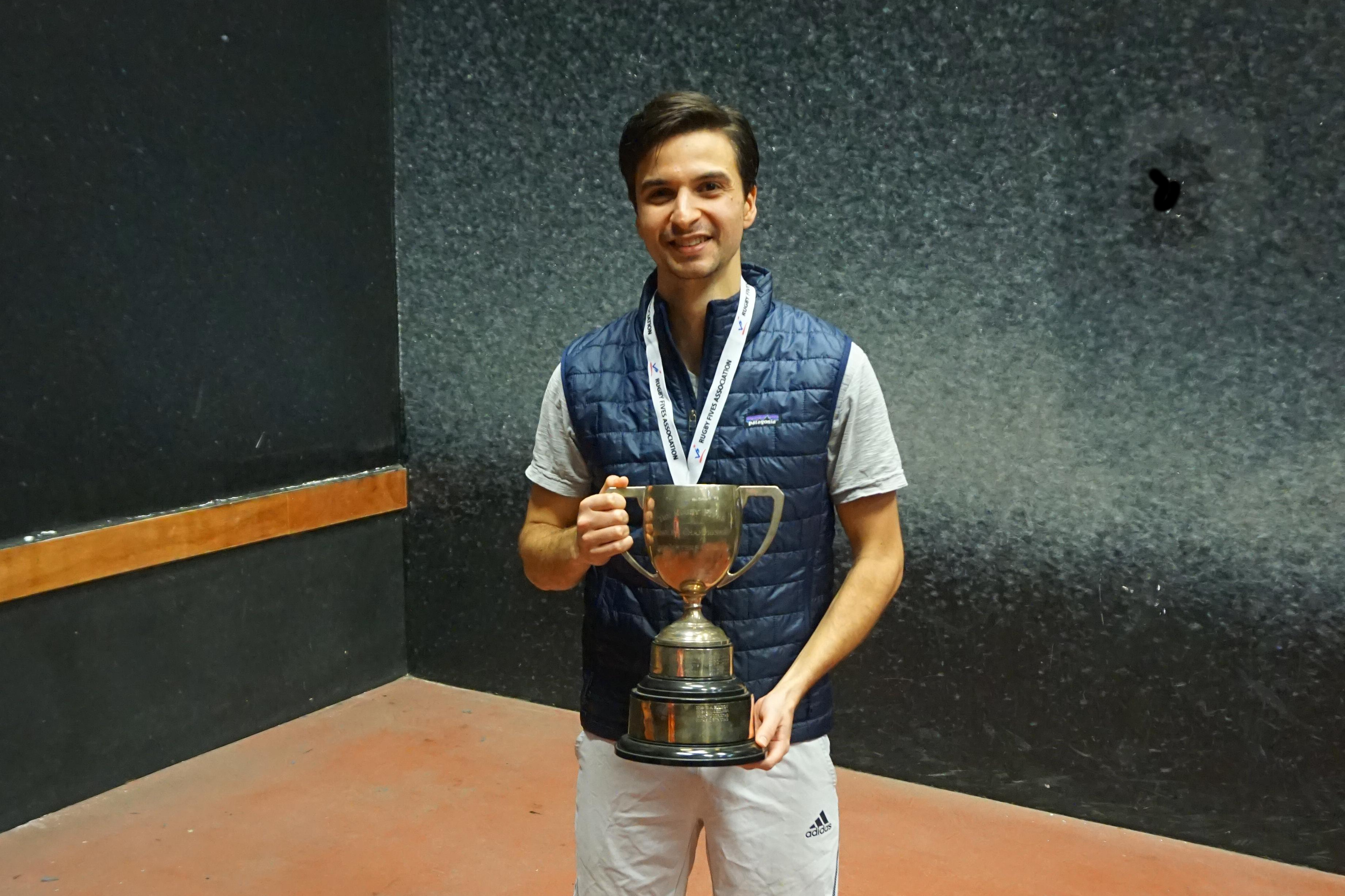 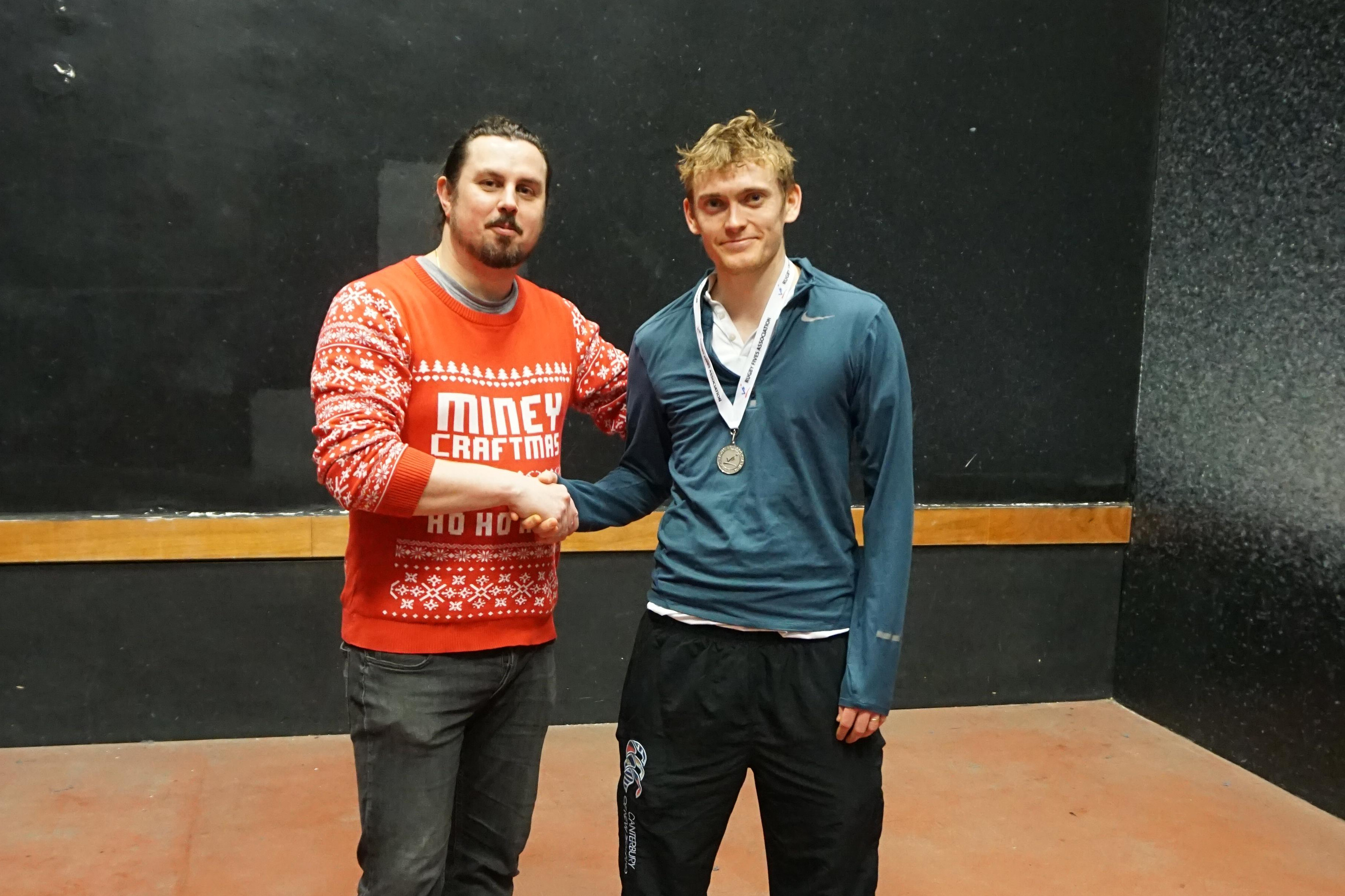 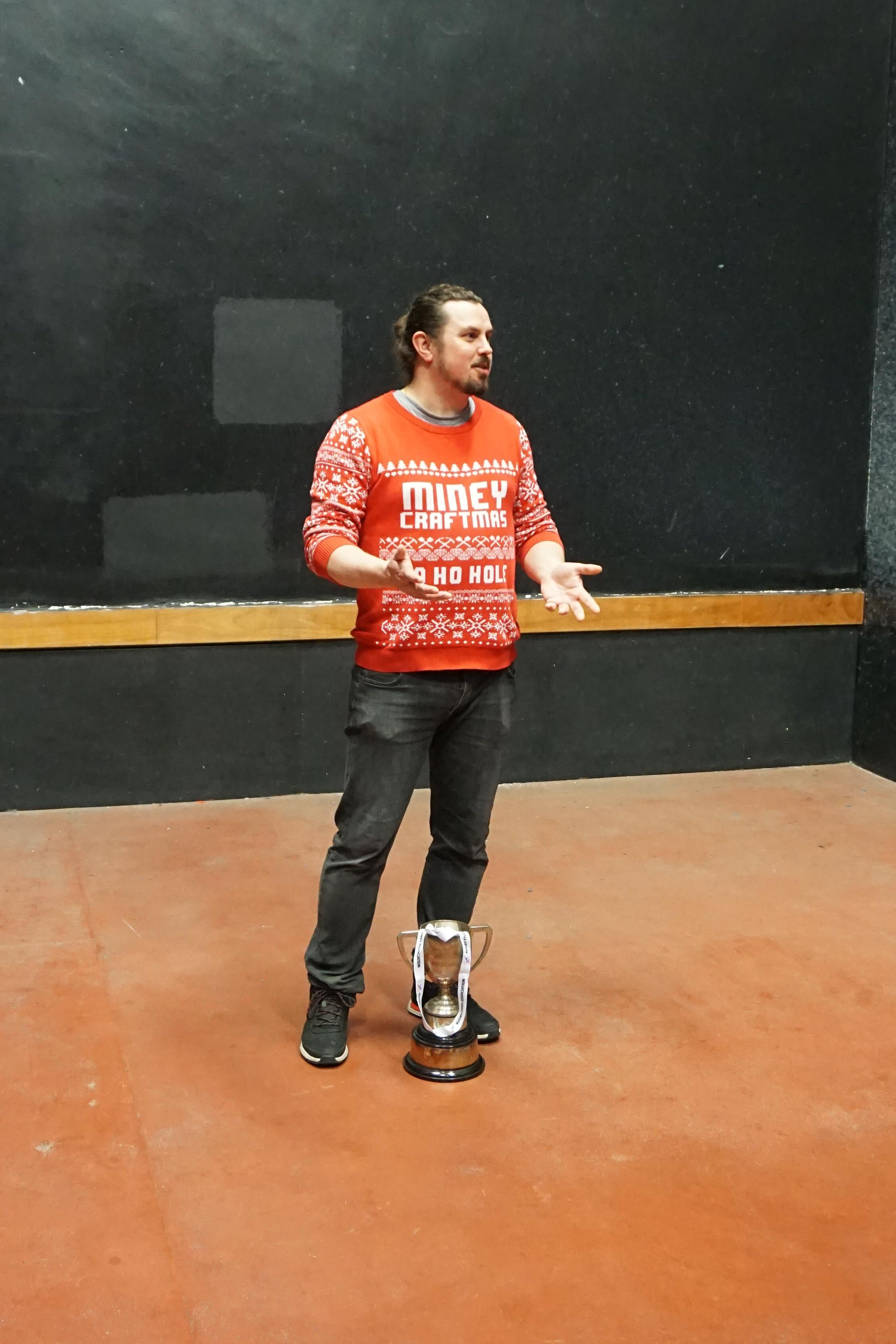 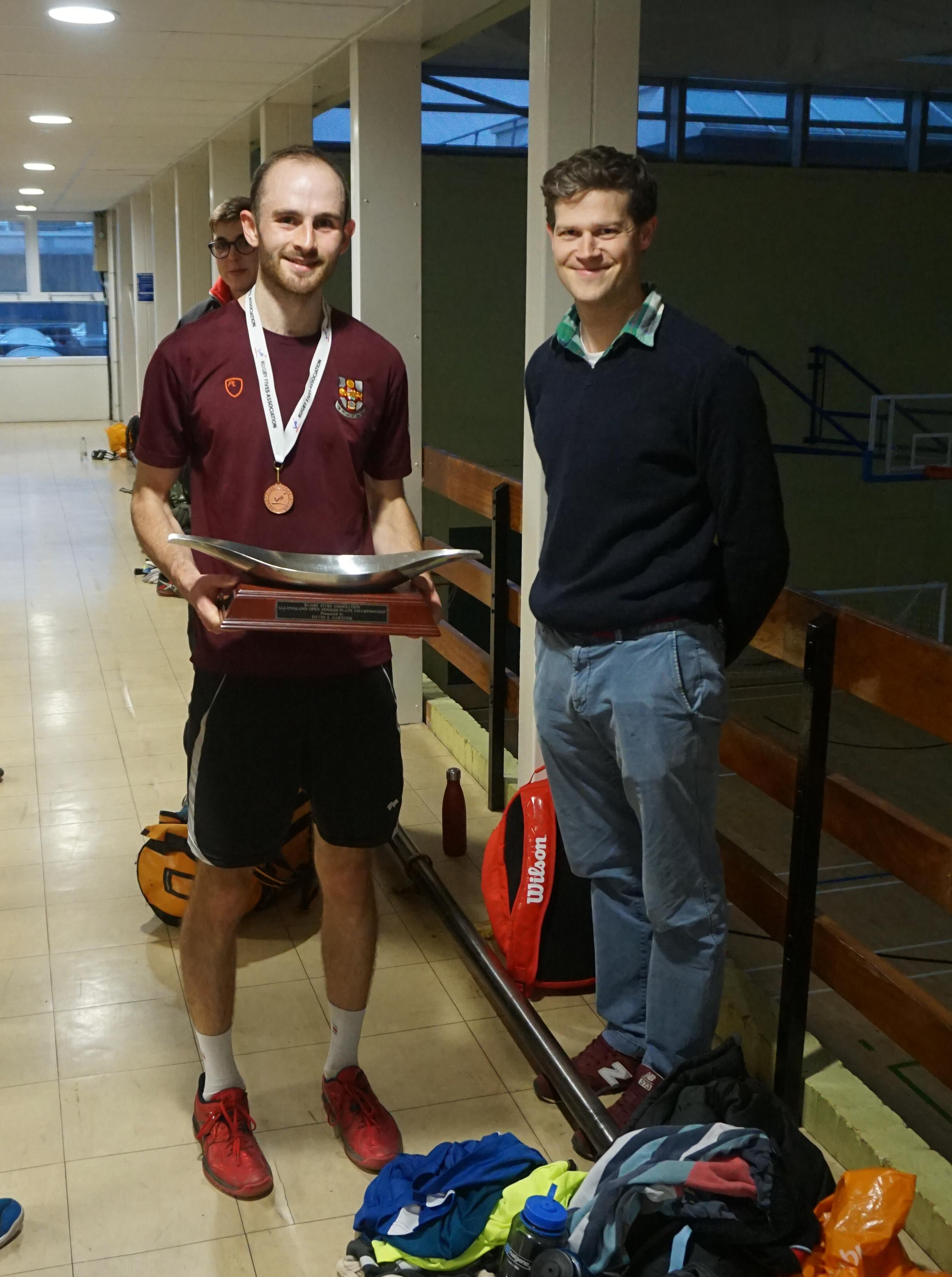 Organiser Charlie Brooks and Ollie Arnold with the Plate