The RFA is sad to report the death in May of one of the great characters from the heyday of Manchester Fives.

Wayne Enstone writes: Danny McGregor was a great all-round sportsman and person. In his younger days his first love was soccer, playing for a number of semi-professional soccer clubs around the Greater Manchester area, finally ending his footballing career in the 1960’s playing as centre forward for the Manchester YMCA 1st team. To quote Fred Beswick: “I supply the ball and Danny does the rest with his cannon ball shot, feet and head included” and “God help the goalkeeper if he got near it, he was in the back of the net, too!”.

Danny followed Fred Beswick onto the fives courts in the late 60’s and they formed a formidable partnership, winning our YMCA Fives Club Doubles five times. Danny had a style of his own, being one of the first bent arm hitters in the club and known for his unique martial arts breathing, ‘whoosh’ noise on striking the ball. Fred was the drop shot master (MOTWB*), while Danny used his powerful hitting to great effect. He was a first team player and captained the club at Oundle in the National Club Knockout Championship, narrowly losing to the RFA in the semi-final, our best ever result up to then.

Danny was a great supporter of junior fives. In the 70’s he became a Junior YMCA Leader on Saturday mornings, helping with our Father and Son camps and in all sorts of activities for 15 years or more. He introduced his son Andrew to the game; Andrew went on to partner John Beswick a number of times in our Greater Manchester Youth Championships.  One particularly memorable fives occasion was when Danny helped take a group of juniors to the West of England Schools tournament in Bristol:  we had happy memories of sleeping in the Bristol Grammar School 6th form Common Room with 60 plus others. Such was Danny’s support for fives.

A stalwart of the Exeter University Fives Coaching Course, in 1983-4 Danny helped with the sponsorship of the South West Fives Championship, getting his company to buy the two trophies for the first event. He also donated the trophy for the North West Doubles in conjunction with Fred Beswick, whose son John describes Danny as “my dad’s best pal. Big hitting Danny loved playing fives together, but loved more being in the bar!” 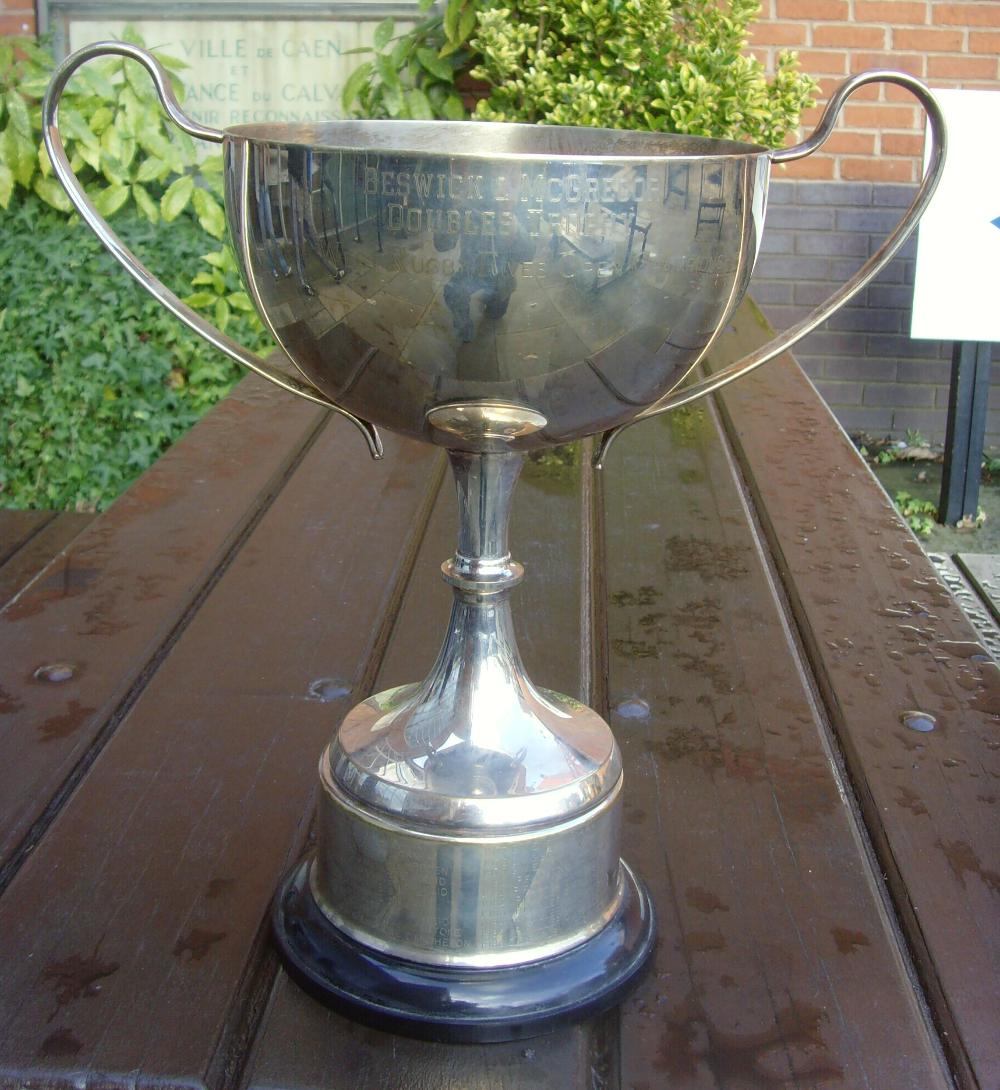 Danny’s competitive fives playing career was coming to an end in the 1980’s, partly due to him moving away from Manchester with his job for a couple of years and then, when returning, his appointment as Commercial Manager of Manchester United understandably took over his time. He still took a great interest in fives and helped our club raise significant money within the Manchester YMCA. Those who attended our Fives Club Dinner Dances – one of them at Old Trafford, fondly remembered by Dave Hebden – will have witnessed the talent which ex-Scots Guardsman, bagpipe-playing Danny possessed for entertainment, with his wonderful singing voice, and there was never a dry eye when watching the Danny and Fred sketches, a laugh a second.

Danny was particularly proud to become President of the Manchester YMCA from 2012 to 2018, during which time he yet again raised a great deal of money for charity.

I began speaking of Danny as ‘great’ and in that context I will finish by saying: Danny was truly one of Manchester YMCA Fives Club’s most generous, warm and loveable players, and that made him a great person to have known and remember for life.

* MOTWB: Master Of The White Ball, as Fred was known. 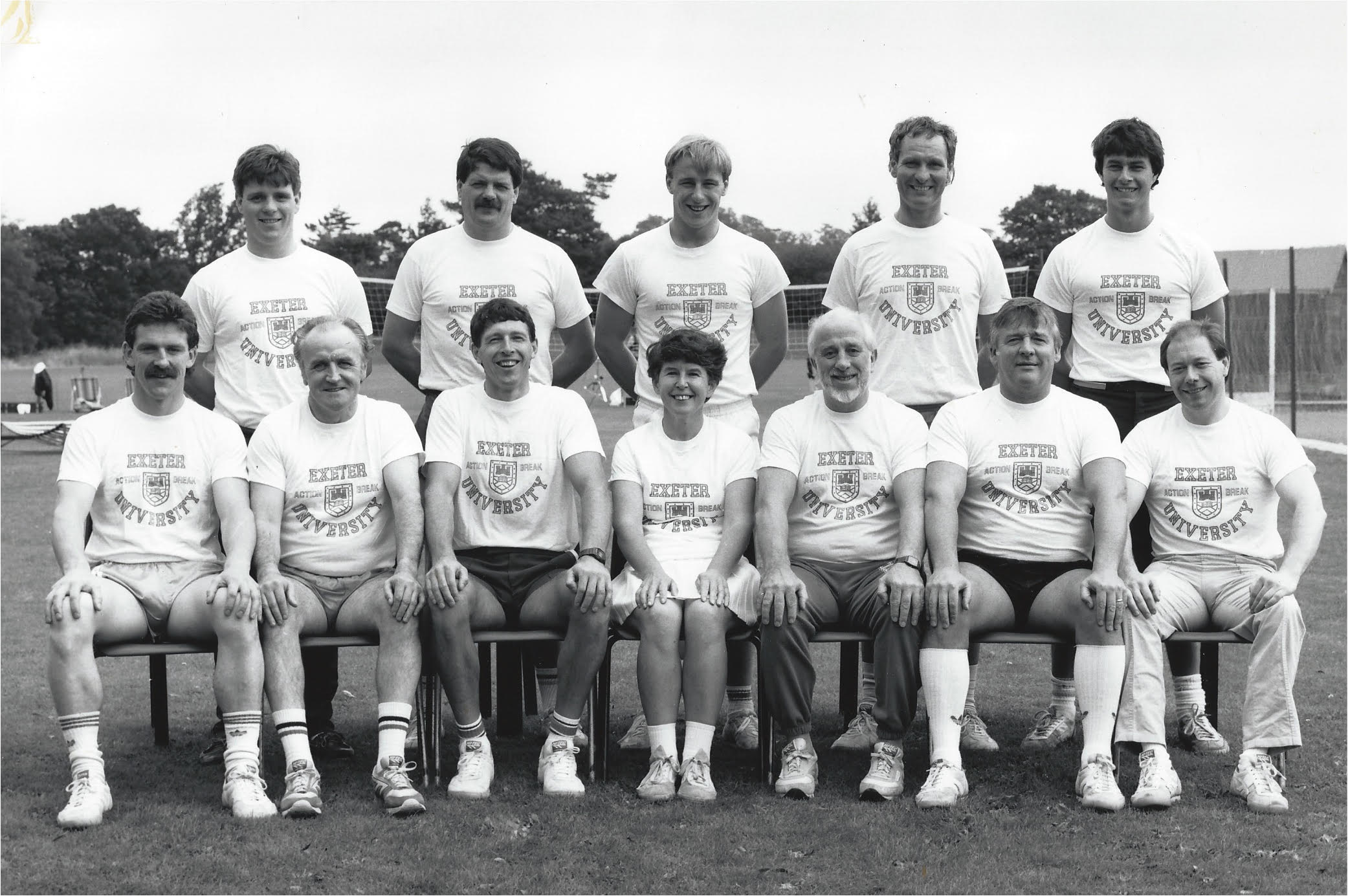 Participants in the 1982 Exeter Fives Coaching Course. Danny McGregor, in long socks, next to Fred Beswick