STOP PRESS: The season has begun! With a tournament organised by the Durham University Fives Club and aimed primarily at university players. There was a Men’s Universities Singles tournament, a Ladies Invitation Singles Tournament and an Open Doubles tournament on the Sunday for those fit and free to enter. Sadly a contingent from Cambridge were prevented from attending by a case of covid requiring their isolation.

Douglas Law reports: The inaugural University Challenger Tournament was held this past weekend at the Durham Courts, the first official fives competition held since early 2020. It was a pleasure to have so many players up to the venue to participate in the contest, and with names such as Boyd, Jourdan and Beattie on the roster, the weekend promised some top-quality fives for the many fans who had gathered in the gallery.

The weekend’s play started early on the Saturday, with a couple of DURVsC players competing in the first matches. These early match-ups whetted the appetite for the games that were to follow, with impressive skills on show from all the players in the first round. Notable mentions must go to Will Hanley, whose ancient gloves did nothing to stifle his flair, and Isaac Weaver whose skills, imported from Eton fives, took him to victory in the plate-plate.

In the meantime, the women’s tournament was in full swing, with five top players competing for the title of women’s University Challenger singles champion. These games were all closely fought, with DURVsC players Bell and Elliot acquitting themselves particularly well. The match between Anastasia and Julie drew a large crowd, with both players fighting for the lead throughout the game before McIntyre clinched victory 12-10.

As the day progressed, any rustiness that might have been evident in the play was gone, and players found themselves back in the groove of playing fives as if they had been on the court only yesterday. Two epic matches are worth calling out from the men’s draw. The first was between newly anointed DURVsC captain Doug Law and the relentless Joe Sumner. Sumner’s unparalleled retrieval and stamina ensured a win, but only after a gruelling first game. Law began to flag towards the end of the second, but it still took a determined performance by Sumner to take victory. The second was the longest game of the day, between ultra-running Durham legend Michael Suddaby and the formidable Scotsman Ben Jourdan. With Suddaby’s consistency and reliability on show, Jourdan needed every ounce of his creativity on court to overturn the first set deficit of 15-3 to pull level in the second with a 15-10 win. The third game between the two was neck-and-neck, but tragedy struck after Suddaby seized a 5-4 lead. Stretching to recover from returning one of Jourdan’s inch perfect drop shots, Suddaby managed to critically injure his shoulder. Moments later, he withdrew from the tournament, and the relieved Jourdan progressed to the final with Boyd. It was a real shame that we didn’t get to see the conclusion of this match between two players who are surely rising stars of the game, and no doubt future rivals across the regional opens.

The day concluded with two finals – for the men’s singles, and men’s singles plate. In the main competition, Andrew Boyd’s precision and top-level experience ensured victory over his teammate, friend and rival Ben Jourdan. It was a tough match between the two, in oppressive heat and humidity, but Boyd’s top ten calibre showed through as he pressed for his eventual victory. In the plate final, first-year fives player Dom Percival put up a good fight against Doug Law, nearly pulling off a dramatic comeback, but falling behind in the end. It was very encouraging to see a player so new to the club already progressing to the plate final in just his first appearance in a university tournament.

The following day was for the doubles, but the not before the first match of the day: The women’s singles final. Zara Elliot took on Camille Beattie in a rematch of one of the round-robin games from the previous day. A local rivalry stirred under the surface, with the players representing Durham’s university and city clubs respectively. In the end the title went to Durham local Camille Beattie, whose crisp hitting had proved too difficult for her opponents to overcome throughout the competition. The final of the women’s tournament was livestreamed on the local club’s social channels, and as the commentator noted, it really does bode well for the future of this format to see these young players playing such attractive fives.

In the doubles, two pairs emerged as favourites in the round robin. Camille Beattie and Doug Tidy were playing some very impressive shots throughout their matches and were certainly the most solid of all the pairs in the draw. Law and Elliot also looked confident, making short work of most of their opponents. These two pairs came together in the last match of the day. It was a closely fought contest, with precise shots from both sides, but Camille’s relentless pressure and Tidy’s formidable right hand eventually ground down Law and Elliot. For those interested, the full game is available to review on the DURVsC Instagram page, with Michael Suddaby’s colour commentary definitely not to be missed. With no ranking points at stake, the spirit of fives was evident across all the match-ups, and especially in the final.

Credit must go to tournament organiser Michael Suddaby, who reached out to other university captains and players on his own initiative. His love of the game shone throughout the weekend, and we are all very grateful for his efforts in bringing us together for this celebration of fives. The tournament was a fitting end to Michael’s captaincy of DURVsC, which was otherwise blighted by the spread of the virus. We hope that this weekend will set the tone for the rest of the tournaments this summer: high quality fives enjoyed by all, played in the true spirit of the game.

Kirsten Bell and Zara Elliot from Durham University; Camille Beattie and Julie McIntyre from the City of Durham Club; and Anastasia de Clermont from Leeds University played out a round robin, from which Camille emerged in 1st place and Zara 2nd. They played a deciding final on the Sunday morning, which Camille won 11-4, 11-6.

13 players from the previous day’s competitions were joined by Poppy Atkinson from the City of Durham Club. 7 pairs then contested a round robin, the last match of which was to prove decisive: 2 pairs had won all their five matches, each had 55 points. Their encounter in that final match went to the wire! 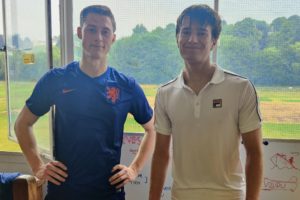 Douglas and Joe battle out the closest quarter-final 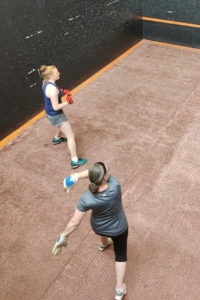 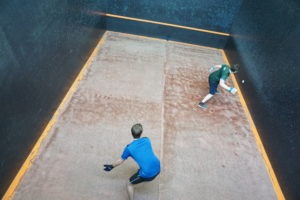 Ben and Andrew — friends and rivals in the men’s final 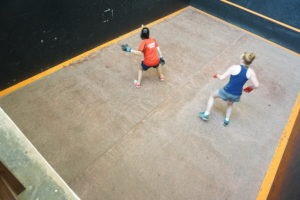 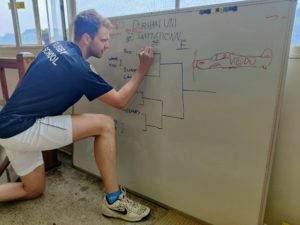 Michael is kept busy with the organisation 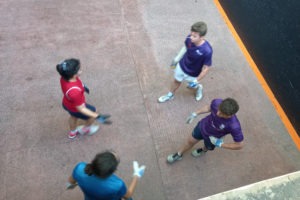 Warm handshakes throughout the round robin 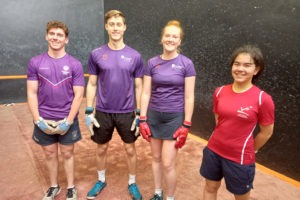 The closest of possible last games 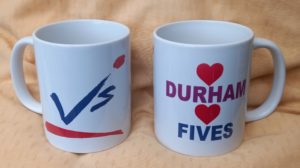