It was all ‘doubles’ at the U25s this year as Ed Kay successfully defended the Singles he first won last year and Ed Kay & Matt Shaw made it two in a row in the Doubles. Tom Watkinson won the Doubles Plate for the second successive year, partnering Rob Whitehorn, who doubled up with a Singles Plate victory. And spare a thought for Ben Beltrami, who was runner-up in the Singles for the second year in a row.

In the Singles Ed had too much experience for Ben — “four school years”, as one contemporary noted –, dominating the front of the court and keeping his opponent under constant pressure. In the Doubles Ed & Matt had that little bit more variety that comes with two right-handers and made just a shade fewer errors than Ben and his partner Ollie Arnold.

The entry was huge: 38 players, with just one dropping out through illness at the last moment, and more universities represented than at BUSF. In addition to the Plate there was a PlatePlate and keen competition to win the Flair Shot Award offered by organiser Ed Kay. More of that in the latter’s eagerly awaited report.

And here it is!

Ed Kay does the double at his own tournament

Ed Kay followed in the footsteps of his namesake Hatton, by winning the tournament that he himself organised. It is hoped that less controversy will follow his victory.

A massive entry of 38 showed that fives is on the rise among the youth in this country: there was some great talent on show. The pick of the first round matches was Laurence Cook vs Tom McCahon. Laurence’s aversion to mornings showed as Tom took the first 15-3, but Laurence wiped the sleep from his eyes and rallied to take it to 15-14 in the second. Tom then showed a cool head to close it out 16-15.

Onto the last 16 and there were few shocks, except James Smith beating Anthony Goodwin. James is now under the tutelage of the great Wayne Enstone at the Y Club and this appeared to help him to a 15-10, 16-15 victory. Round 3 again produced shocks, with Jacob Brubert, in his final year here, using all his experience to take down 5th seed Ollie Arnold 15-6, 15-9. There was also a strong showing by schoolboy Andrew Boyd, who downed U25s veteran Adam George 15-7, 15-3.

In the quarter-finals Kay and Beltrami cruised past Parker and Boyd respectively. The other two games were cracker-jackers: firstly Matt Shaw beat Dave Butler 15-11, 15-16, 15-10 in a match where tempers flared and the atmosphere was gladiatorial; secondly Julian Aquilina showed a cool head that his hero, Roger Federer, would have been proud of. Julian clawed back from 14-4 down to take the first game 16-15 against Jacob Brubert. Jacob came out like a raging bull in the second to secure a simple 15-2 game, but Julian proved just a bit too consistent and accurate in the third, winning 15-9.

Due to these marathon quarter-finals, the semis were a damp squib, with Julian barely able to move against Ed and Matt only able to secure one point – a down serve from Ben – after initially showing strong signs by taking an 8-0 lead. In the final Ed proved too strong for Ben, showing slightly better consistency and experience to win 15-4, 15-7.

The best-of-3-to-6 format in the Singles Plate gave rise to some classic games, notably Christian Blackaby chucking away a 6-1, 5-0 lead against Laurence Cook, to lose 6-1, 5-7, 0-6. There was a strong showing from Oxford freshman Sid Bhushan who made it all the way to the final. However Rob Whitehorn was far too strong for the whole field in the Plate and secured victory in the final 11-3, 11-4.

This year showed the first introduction of the PlatePlate: a tournament for those who fell short in the first round of the Plate. The first semi-final was between the wily Cameron McKelvie (recently returned to the game after a few years’ hiatus) and talented Oundle schoolboy Charlie Rodgers. McKelvie proved way too experienced and served up a double bagel to the schoolboy. The second semi was an all-Durham affair with Tom McCahon taking on the rapid improver Thomas Raikes. McCahon’s greater consistency showed as he went through in two sets. Come the final it was McCahon who went home with the creme egg as McKelvie proved that you need more the wile to win the PlatePlate.

A huge 18 pairs for the Doubles meant another early start on Sunday. The day started with an epic first round as Singles PlatePlate winner McCahon and his Durham teammate Blackaby came from one game down to secure an historic victory against Oxford pair Mills & Hale 13-15, 15-12, 15-5. In the second round there was one upset: Oxford first pair Thomas and Bhushan pulled out all the stops to take down the new pairing of Watkinson and Whitehorn 15-9, 15-6. Theo Parker (Watkinson’s coach and mentor) was not happy, blaming Watkinson’s overtraining in the gym during the past few months. The pick of the quarters was Parker & Butler vs Jefferies & Waller, with the ex-Oxford underdogs taking the first game 15-4. However, they were unable to sustain the pressure and Parker & Butler pulled through 4-15, 15-7, 15-11. Meanwhile Kay & Shaw and Beltrami & Arnold made serene progress and managed to set up the final that all the pundits were predicting, despite the best efforts of Aquilina & Tilston. In the final Shaw looked like an upgrade from Kay’s previous partner (Dan Tristao) as he ran around the court like a madman, making every ball. As in the Singles final, superior consistency won the day and Kay & Shaw took the Doubles title 15-11, 15-8.

In the Doubles Plate Watkinson & Whitehorn blitzed the competition, with only Chua & Smith managing to get close to them in the final. Meanwhile in the Doubles PlatePlate McKelvie went one better than in the Singles to take the title with Matt Hale as they beat hybrid pairing Ben Bowry & Thomas Raikes 15-11 and 15-year-old schoolboy pairing Colbert & Sumner 15-13.

By popular demand the Flair Shot Award was re-instated this year: a prize generously donated by Dan Grant to encourage shot development in young players. There were five entries this year, but it was again wily campaigner Cameron McKelvie who took home the spoils, adding to his Doubles PlatePlate victory and doing the coveted “double”. Cameron’s return-of-serve-volley-drop-shot-winner scored 10/10 for intentionality and 10/10 for match importance (it was the only point he and Hale won against Chua & Smith), and although he got no points for calling it before hitting it or for gloating/celebrating afterwards, the double points on offer for a winner meant that his total of 40 was enough to beat 2) Dave Butler’s deliberate hit into partner Theo’s two veg (32 pts), 3) Arnold for something I didn’t see (18 pts), 4) Arnold’s behind the back shot (17 pts) and 5) Matt Shaw’s on-the-knees volley (11 pts).

Special mention must to go to Joseph Sumner and Oliver Colbert who, at 15, played in their first (of hopefully 11) Under 25 tournament. They proved that they can already compete at this level and hopefully this tournament will give them good experience going into the schoolboy championships.

Finally many thanks go to Mike Case of Oundle School for letting us hold this event in their fantastic venue and to the Jesters Club for their generous sponsorship of this event. 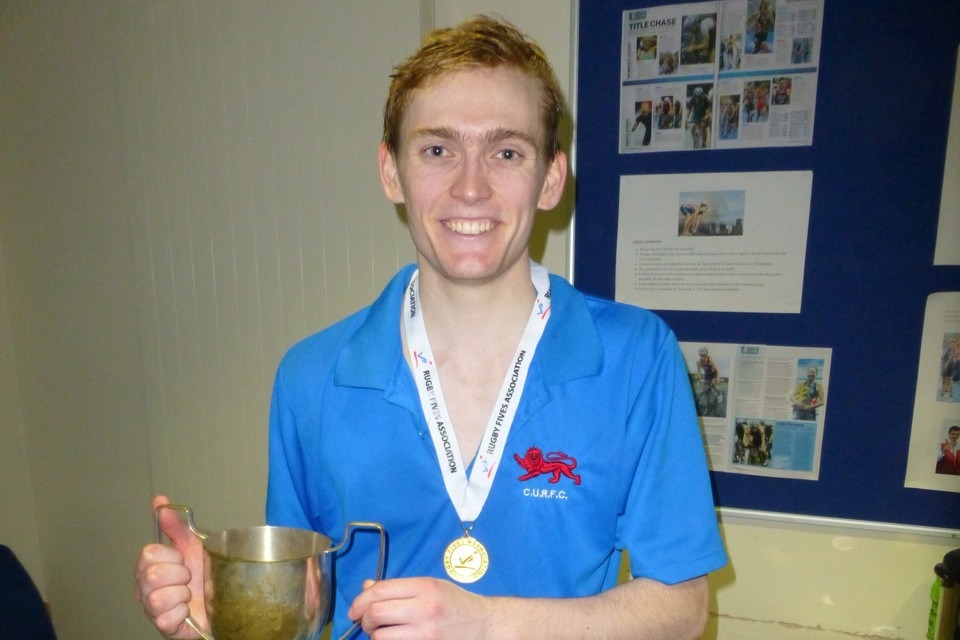 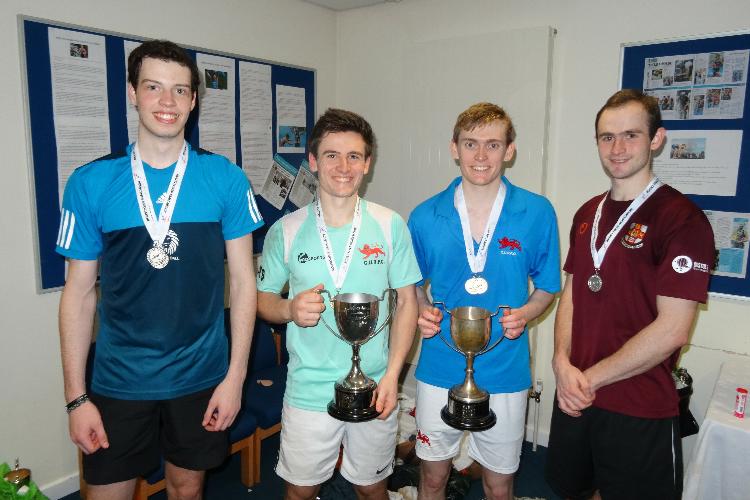 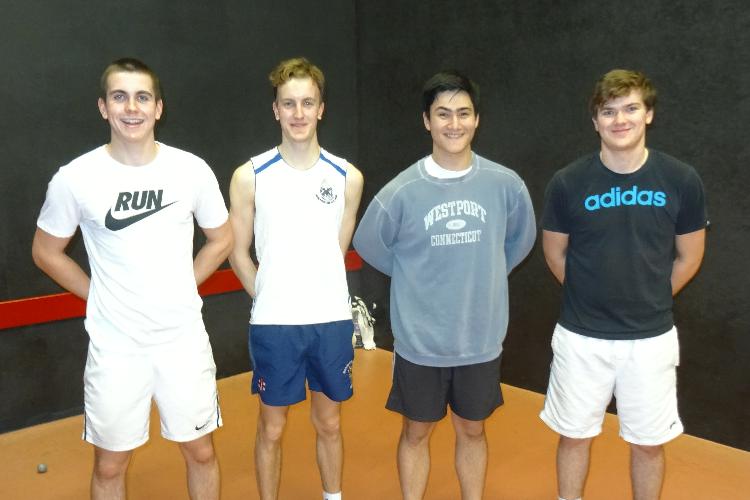 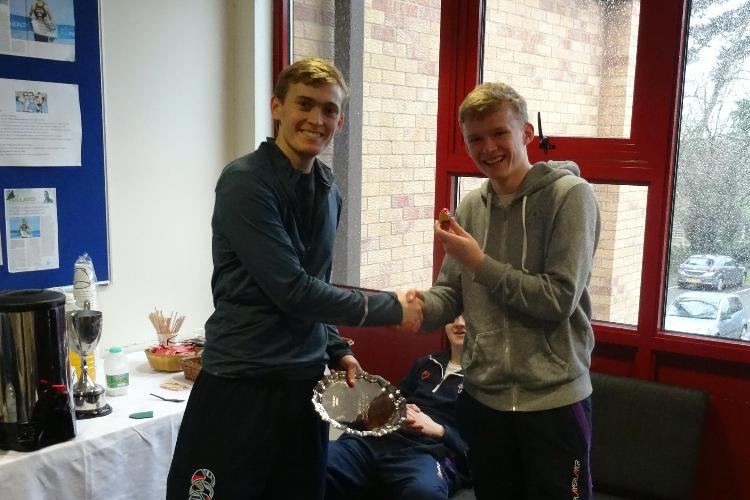 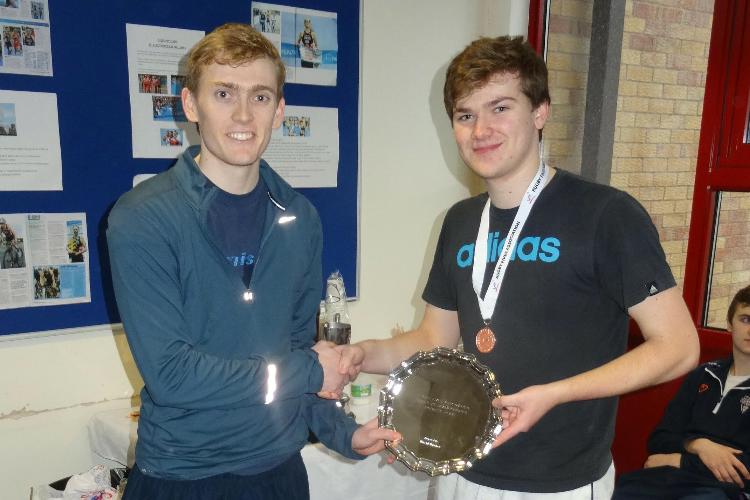 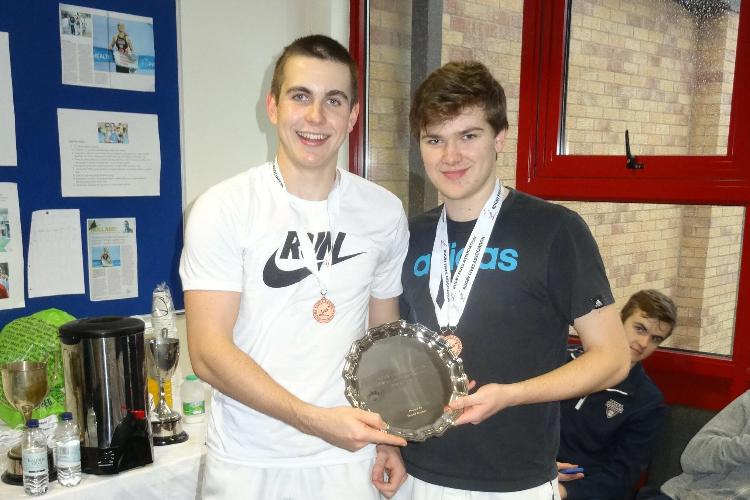