Organiser Harry Akerman reports:  With 9 of the top 10 ranked players in the draw for this year’s Barnes Bridge it was the most eagerly awaited Winchester Fives competition in years. There were 9 previous winners, including a first appearance for many years for Roger Layton, the 5-time winner of this tournament (last victory 1996!). Roger, who this year was playing with his son Max, was supported from the sidelines by his winning partner from those days, Mike Tremellen (possibly regretting not entering himself??), and it was great to see two other members of their school team, Philip Last and Tony Brown, also joining in.

Concerns over the potential for sweating were raised when the courts started getting damp during a practice session played after Denise’s Memorial Service on the Saturday evening. However, we were met with slightly cooler weather on the Sunday and bone dry courts, so we started the tournament with optimism. Early round matches of note saw Mike Crompton & Rory James Duff push Tom Watkinson & Jez Sinton close before losing 15-10, 16-15. Ben Hale & Steven Coffey would have claimed a game off Hamish Buchanan & Adam George had we been playing to 11, but they eventually went down 15-13, 15-5.

With the courts now sweating badly and with every likelihood they would get worse, a decision was made to take the plate and remainder of the tournament down to Winchester. Sadly, not all plate players were able to make the journey but we still had all those in the main draw plus seven pairs for an excellent plate.

On restarting the competition at the quarter-final stage in Winchester our top eight seeds were all still in the competition as expected. The only real fright for the top four seeds saw Dan Tristao & Dan Grant given a tough time by Sam Roberts & Giles Munn, but the second seeds eventually went through in two games 16-14, 15-11. The first semi-final saw a reasonably comfortable victory for number 1 seeds Will Ellison & Ed Kay against Theo Parker & Matt Shaw by 15-5, 15-10 but there were some excellent rallies, and Theo and partner did make Will and Ed look rushed for the first time in the day. The Dans’ route to the final was much harder work: they first had to come through a very tough semi-final against last year’s winners, Dave Butler & Ben Beltrami, 15-10, 7-15, 15-6. The top two seeds therefore reached the final and for the first time in this tournament we had the sight of Ellison & Kay versus Tristao & Grant. The two Dans had lost 60 points on the way to the final compared to Ed & Will’s 17 and, as a really exceptional game of Winchester Fives developed, fatigue started to play its part. However, the quality of the rallies remained exceptionally high and exciting. Eventually Will (for his 8th time) and Ed (for his 2nd) came out winners in the end 15-8, 15-11.

The plate was played in a round-robin format of one game to 11 against each pair and was won by Ben Hale & Steve Coffey, who won all their matches. They were pushed hard though by Rory James Duff & Oliver Bruce (11-10), by Tony Metcalf-Gibson & Harry Akerman (11-9) and by James Birch & Joe Gribble (11-8).

Thanks very much to Bradfield for kindly hosting us and of course to Winchester College for stepping in to save the day when it was all getting a little slippy! Next year we will be in Winchester — hopefully for all of the tournament! 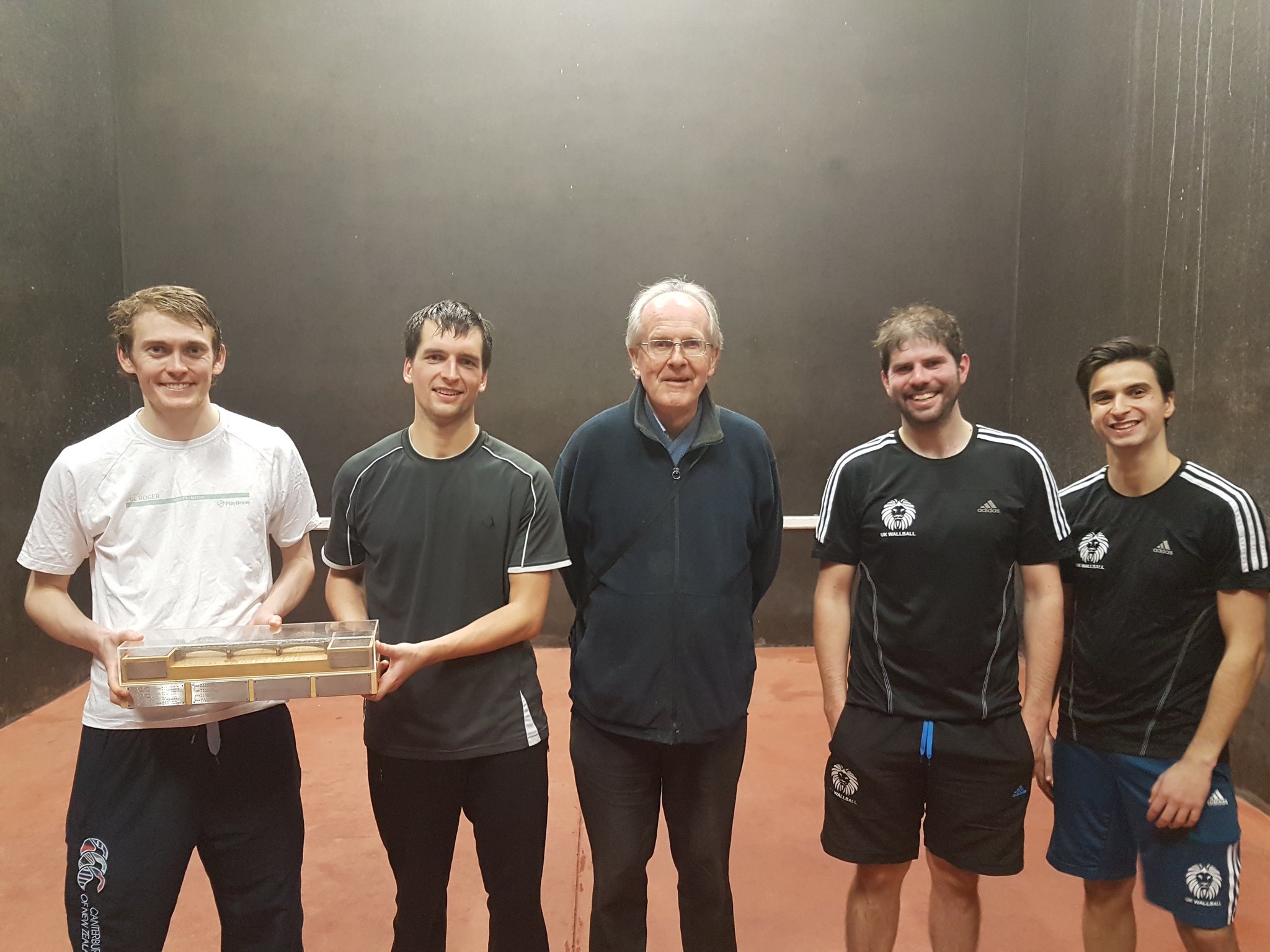 The finalists, the Bridge and Mr Barnes himself