STOP PRESS
After several years of domination by players from Cambridge University, it was all change in this year’s Student Championships. In fact, neither the singles nor doubles champions had previously won a title at this level.

David Butler took the singles title, becoming the first player from Edinburgh University to win the title in 50 years. Runner-up was Theo Parker, but Theo — along with fellow Bristol student Ollie Arnold — did have the consolation of winning the doubles title. In the process, they became the first Bristol champions since the very first Universities event in 1960.

Organiser Theo Parker writes: This year, St Paul’s School provided the ideal setting for the British Universities and Student Fives championships. Entries were once again good, with 35 singles players (despite three last minute drop-outs) and 18 pairs in the doubles. Particular mention should go to Oxford University for contributing the largest group of players: an impressive 11 singles entries and 5 doubles pairs, which bodes well for the Varsity Match early next year. The challenge for next season is for another institution to match or better Oxford’s numbers. It was especially good to have four female players (Louise Mathias, Shinan Zhang, Phoebe Thornhill and Bee Crinnion) enter for the first time, and all should be congratulated for rising to the challenge admirably (all the more given they competed in the Ladies U23 tournament simultaneously on Sunday). It would be great to see even more women enter the tournament next year.

Overall, the fives was of a great quality, with close matches throughout the main and plate competitions, and silverware split between three institutions. An early highlight in the singles was a tight 3-set match between Dan Whitham (Oxford) and Cameron Low (Bristol), with the former coming through 11-5 in the third. Similarly, Christian Blackaby (Durham) came through in two tight games against Jeremy Manger (Cambridge) 11-6, 11-8. Given this, it was unsurprising that Jeremy and Cameron went through the plate to meet in the final on Sunday morning, with Cameron winning 15-5 15-1.

In the main competition, David Butler (Edinburgh) came into the competition as the clear favourite, given his recent form which had seen him win the Yorkshire Open and beat Will Ellison in the West of England Open at Marlborough. True to form, Butler made it through to the final with relative ease, despite coming up against perennial student Jacob Brubert (Oxford) in the quarter-final, and Cambridge no.1 Andrew Boyd in the semi-final. Andrew might have been feeling the effects of a long game in the previous round against Oxford no. 1 Ben Kirwan: a meeting of two attritional styles of play. In the other half, there was an exciting match up between brothers Hanton (Julian and Peter), with Julian upsetting his older brother 15-7, 15-8.

Other than that, the matches went to seeding until the semi-final, where Theo Parker (Bristol) managed to overcome the left-hand hard hitting of his fellow Bristolian Ollie Arnold. This set up a final, played on Sunday morning, between two familiar foes: Butler and Parker. David stormed ahead in the first game, playing a nice line and length, and tiring Theo out on the hot St Paul’s courts, closing out the first 15-7. Many expected Theo to roll-over in the second, but he came out strongly, hitting some nice winners and serving exceptionally. But David, now a seasoned singles ‘Top Tenner’, managed to weather the storm, claw back a lead, and eventually close out a deserved victory. Congratulations, Dave.

By this point, the doubles competition was already underway, with timings tight due to the Ladies U23 championships using two of the courts and the strict 5pm curfew. In the Plate competition, Sid Bhushan & Dan Whitham made up for a tight 2nd round loss to the Durham 1st pair to reach the final, coming up against Durham no. 2 Douglas Law & Michael Suddaby. After a tight first game, and in front of a huge crowd of enthusiastic supporters, the Oxford pair closed out the second 11-2 to take the crown (Dan’s second plate doubles win in a row).

In the main competition, like the singles, there was a clear favourite pair: Arnold & Parker from Bristol, the reigning Yorkshire Open champions, who had lost the previous three finals (a statistic that was helpfully highlighted by David Barnes in his information display, much to the organiser’s displeasure!). The doubles went mainly to seeding, other than a brilliant quarter-final win for freshers Cameron Low & Archie McCreath against the seasoned Oxford no. 1 pair Pete Hanton & Ben Kirwan. The final saw Parker & Arnold come up against Butler & Jourdan, giving Theo the chance to take his revenge on David. In the end, and despite Dave & Ben’s best attempts, Ollie & Theo proved far too strong, winning with ease 15-4, 15-2. This was Bristol’s first doubles win since the first ever tournament in 1960.

The trophies were kindly presented by current RFA President David Bawtree. It was great to have David, along with a number of other past Presidents and esteemed guests, supporting the event at different points throughout the weekend. One noticeable absentee, however, was 58-year organiser and founder of the event, David Gardner, who had taken a well-earned holiday to Sri Lanka. We look forward to being able to welcome David back to the championships in the near future.

A few final words of thanks: to St Paul’s School for hosting the event in their top quality facilities; to all the supporters for making the atmosphere so lively and vibrant all weekend; and to all the players for travelling long distances to compete and for making the tournament so smooth and painless to run. Until next year!

Photos with thanks to David Barnes 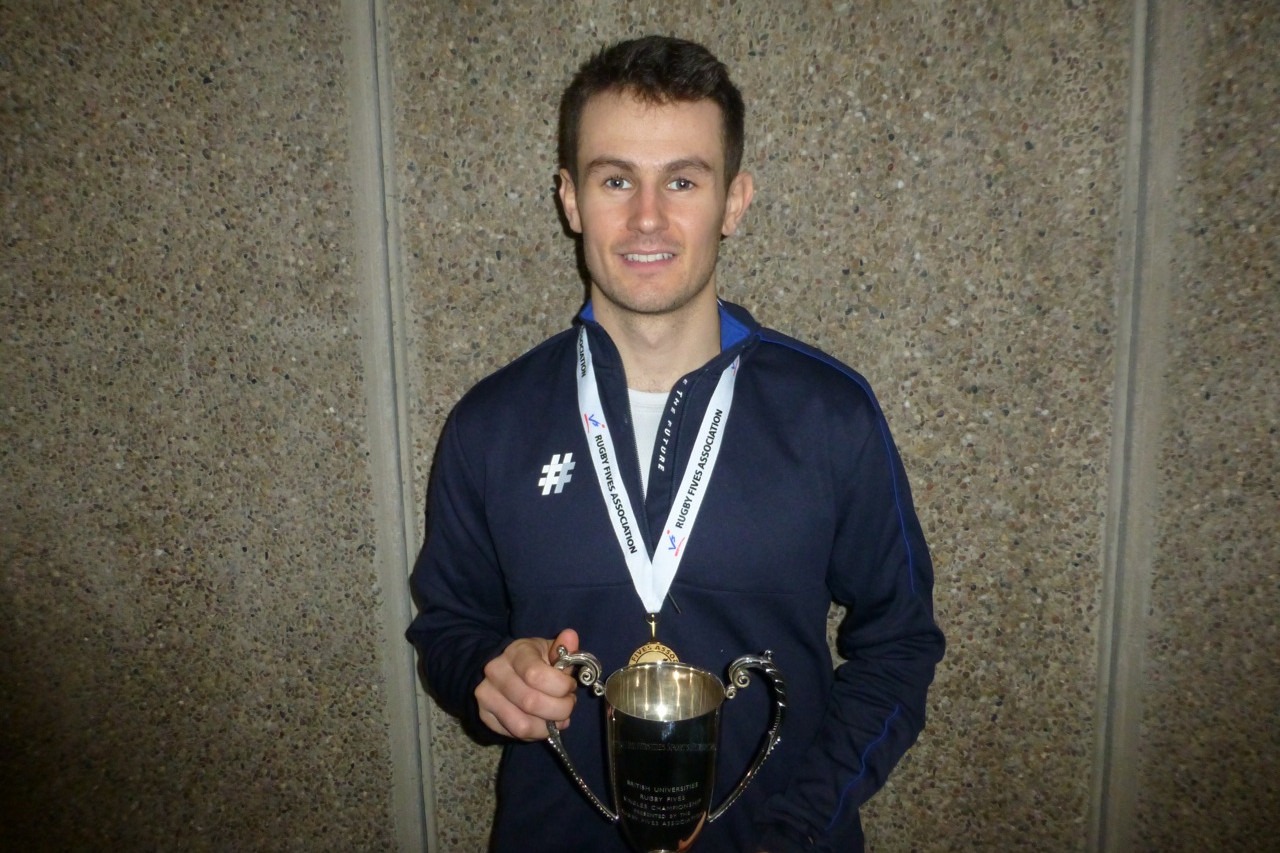 The Champion from Edinburgh University 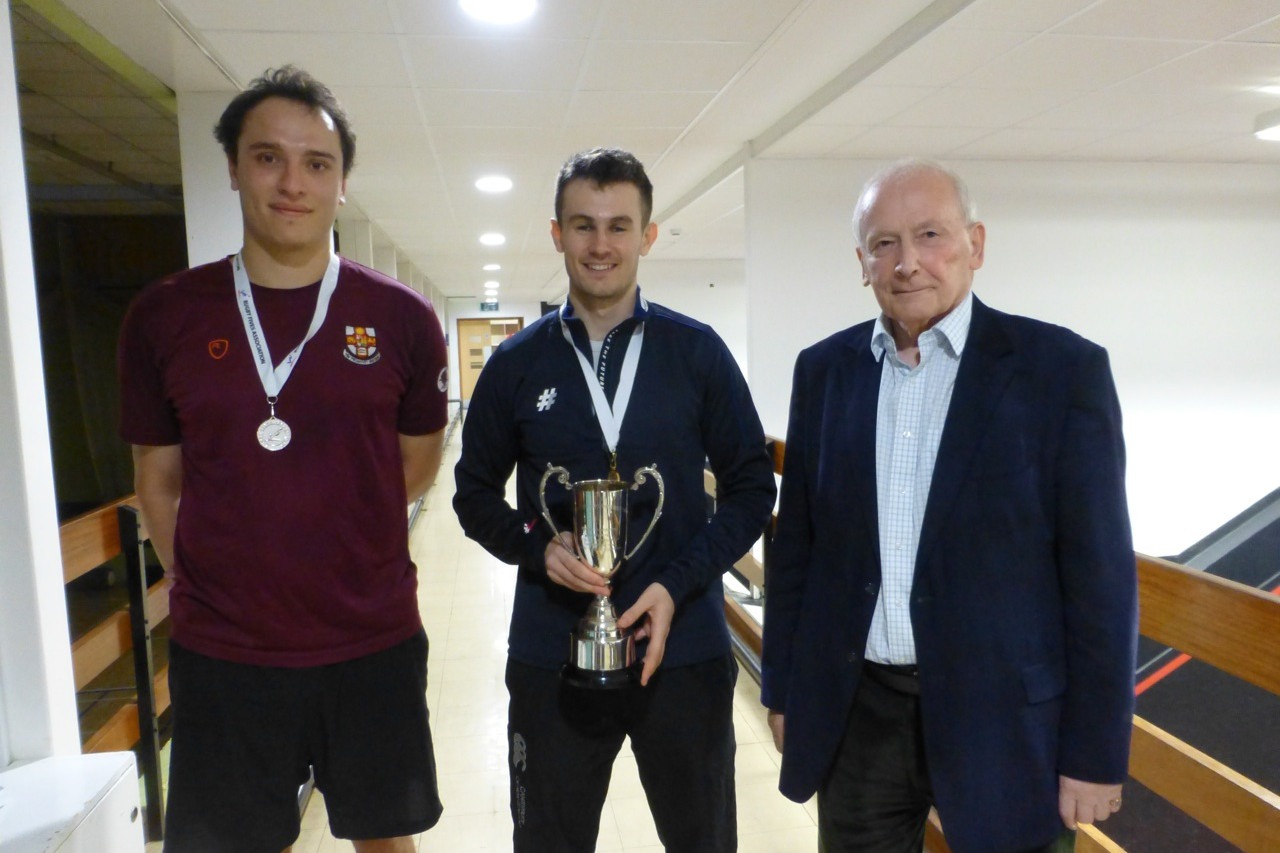 The Singles finalists with the President 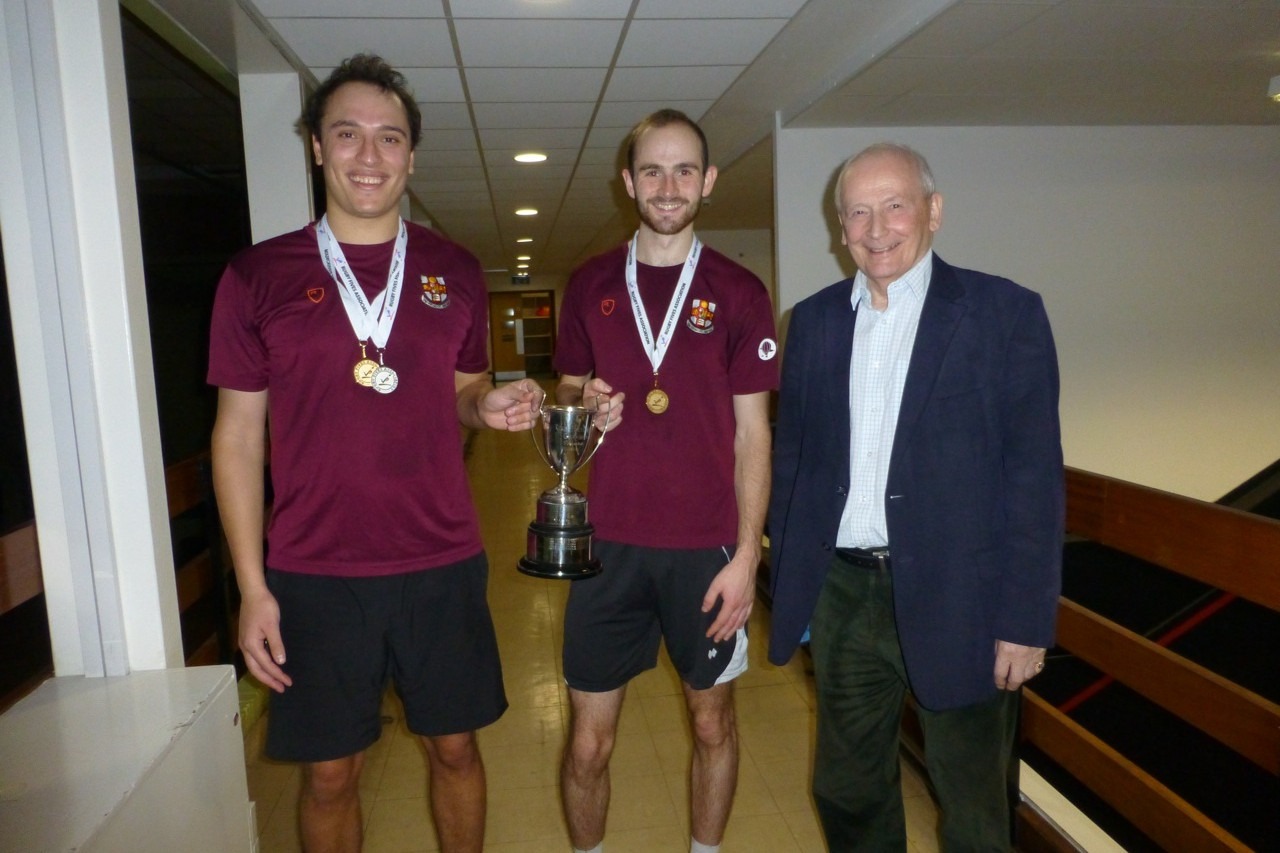 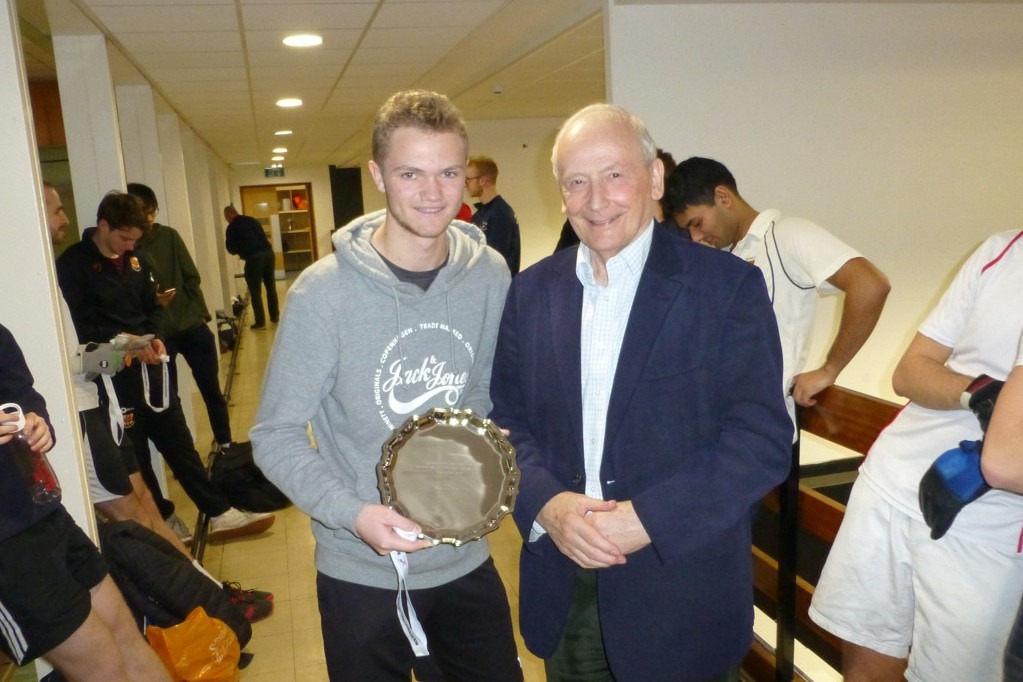 The Singles Plate winner from Bristol University — at his first championships 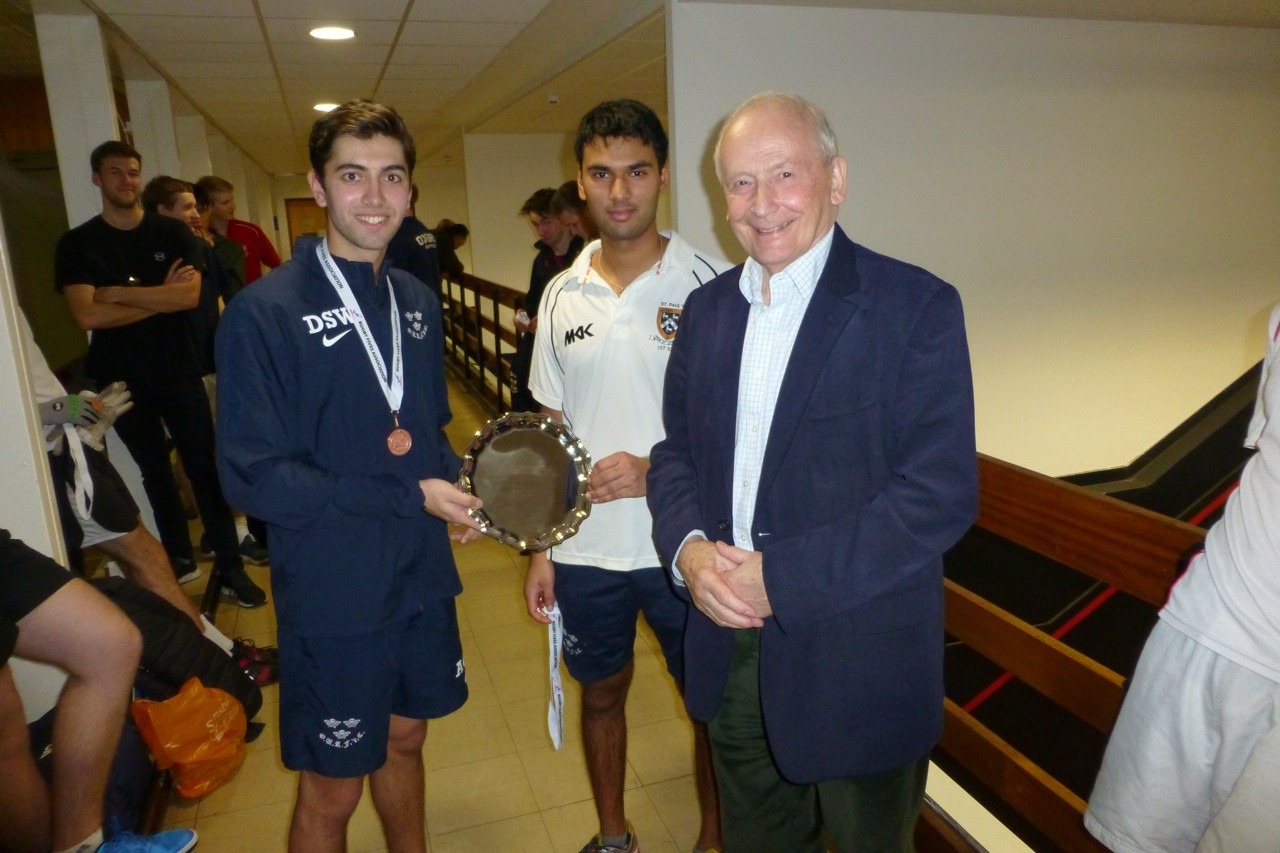 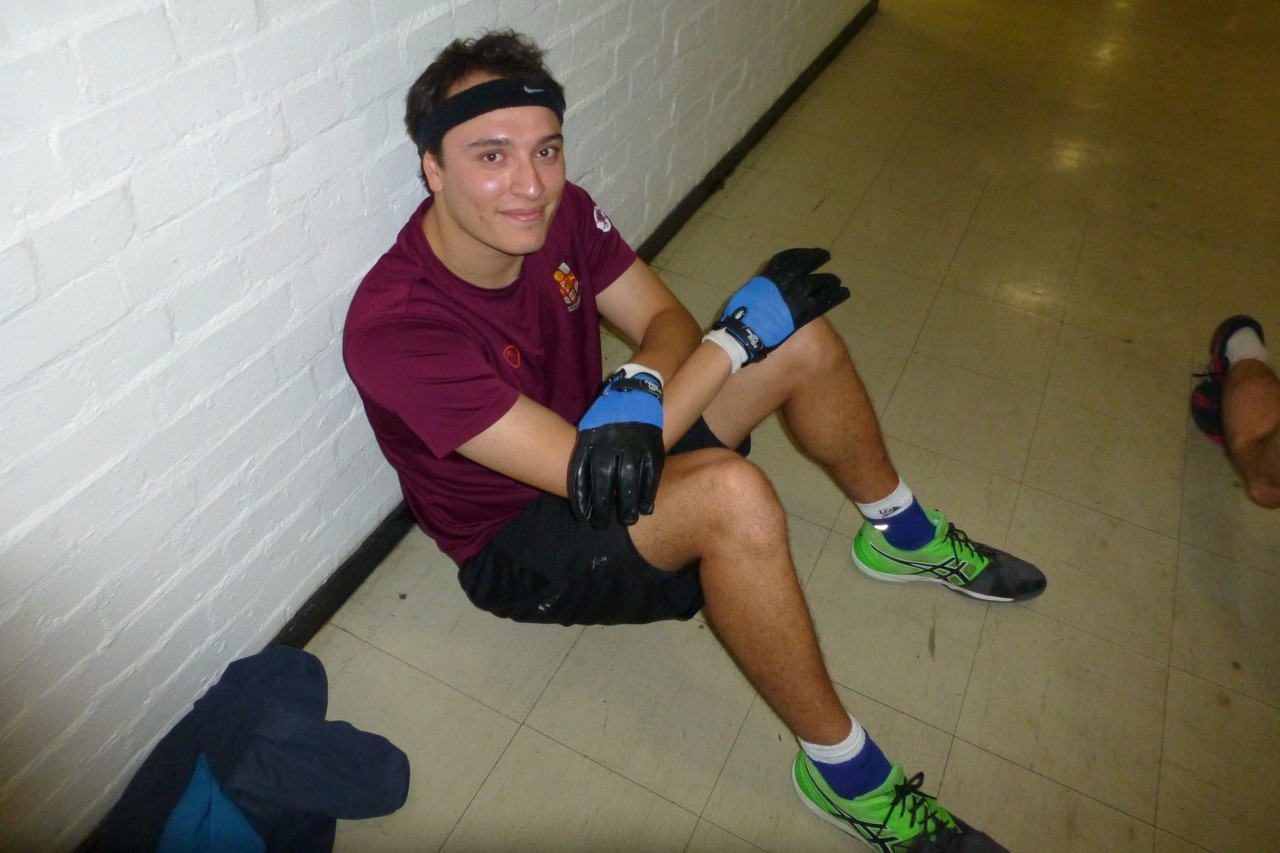 The Organiser — all smiles 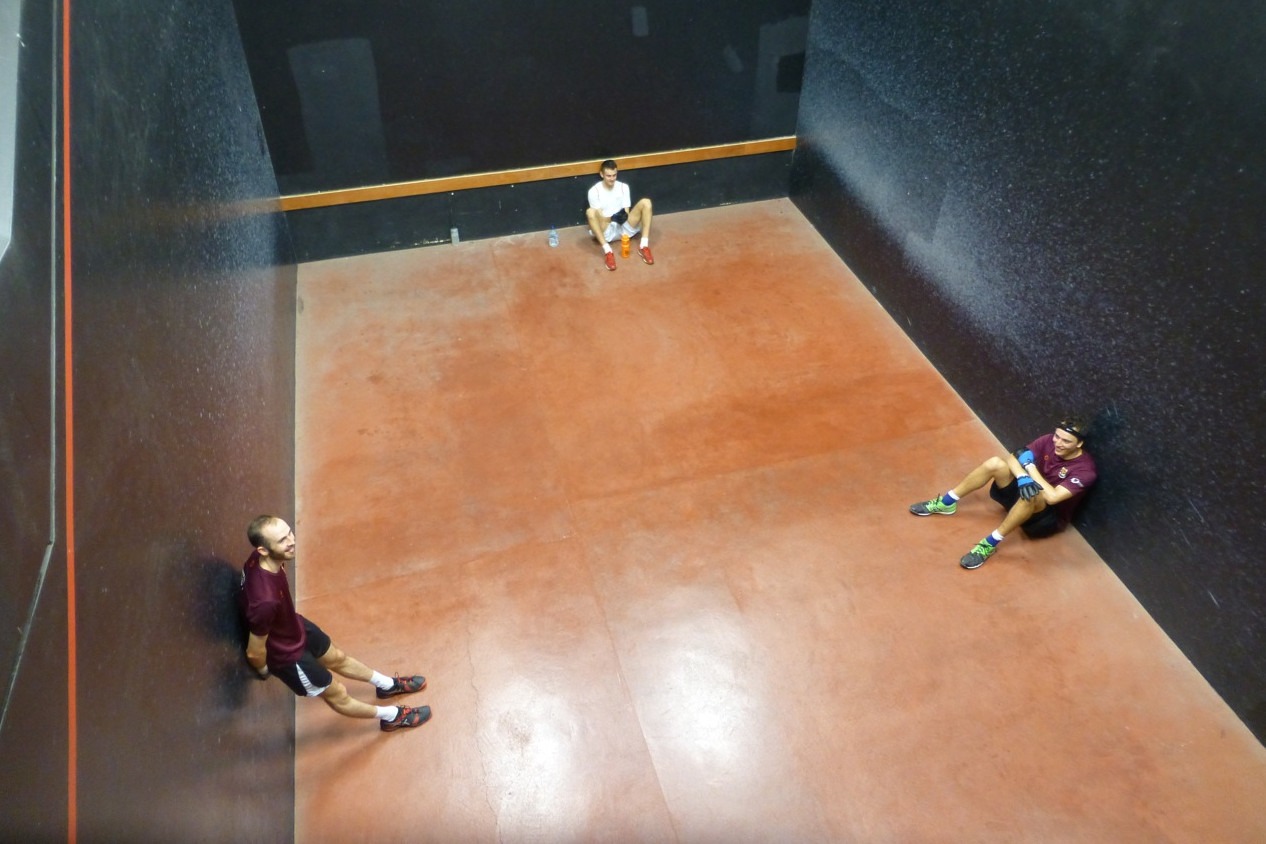 Walls have their uses!