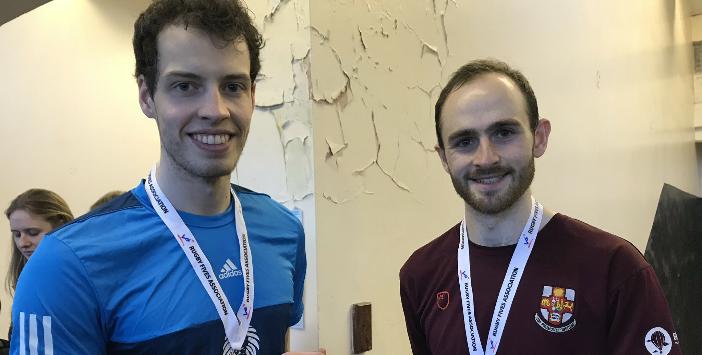 Organiser Julian Aquilina reports: This year’s North of England tournament was contested slightly earlier than usual, brought forward by two weeks due to scheduling clashes. Those fearing even colder weather need not have worried, as the new addition of dehumidifiers and heaters made for a significantly more pleasant experience at the Durham courts. In addition, the rescheduling brought along some new faces — with significant implications, as it turned out …

With over 30 singles entries for the second consecutive year, and just two courts at the Racecourse, a qualifying round was held on the Friday night between members of the City of Durham club. This was just a taste of things to come, with fierce competition on display alongside a spread of food normally reserved for the President’s Cup. After over two hours, Simon Beattie, Camille Beattie and Adam Hicks had booked their place in the main draw, thus committing themselves to returning to the courts in less than 14 hours. The fans were forced to wait for the media coverage to begin, as the press conference was skipped in the interest of time.

24 players started in the main singles draw on Saturday, with relatively smooth progress through the first two rounds. In the first round, the crowd’s pick of the matches was between recently-crowned Ladies’ National champion Louise Mathias and local club captain Tom Wakelam, in a game that lived up to the hype, going down to the wire before Tom edged it out, 12-11. In an equally exciting match, Doug Law managed to come from behind to oust Nick Geere 12-10, spurred on the thought of joining the singles rankings.

There were no upsets in the quarters or the semis, with relatively convincing scorelines throughout. This set up a final between the top two men in the rankings, five-time champion Dan Tristao and first-timer Ed Kay. The players had met three times already this season with Ed leading 2-1, although Dan had won their last meeting at the Nationals in December in two close games — and so the stage was set.

The match was played at high-intensity right from the start, with each player manoeuvring the other around the court in long rallies full of drop shots — the ball flying barely above the bar. However, Ed’s imperious consistency and focus looked to be taking an early toll on Dan, who appeared slightly off the pace. Ed kept drawing the errors from Dan, racing away with the first game in just 12 minutes.

In the second game Ed continued his rich vein of form, continuing to chase down drop shots and putting Dan under pressure early in each rally, sweeping him aside inside 10 minutes. Final score: 11-3 11-1. It was a dominant display from Ed to lift his first Ferens Trophy, leaving the crowd dumbfounded. No one was able to recall a time that someone had outclassed Tristao in that manner.

Earlier in the day, the Singles Plate had been contested between 13 players, with the final between top seed Nick Geere and Durham University student Jack Sissons. Both players had come through entertaining semi-finals, with Nick beating local schoolboy Simon Beattie and Jack overcoming Louise Mathias. The final went the distance, but after a very close first game Jack was able to outlast Nick in three. Final score: 10-12 11-6 11-4. Meanwhile, in the PlatePlate, Phoebe Bracken won all her round robin matches.

In Sunday’s Doubles there was smooth progress through the first round and most of the quarter-finals. In the fourth/fifth seed match the student pairing of Julian Hanton & Archie McCreath did push ex-Durham Uni captains Sam Russell & James Tilston all the way, but they eventually succumbed 11-8 in the third. From there onwards though, Julian & Archie won all their Plate matches, outlasting current Durham Uni captain Christian Blackaby & partner Pete Kullavanijaya in a see-sawing final, 11-0 6-11 11-5.

Meanwhile in the main draw, Arnold & Beltrami took down Aquilina & Kay in their semi-final to set up a showdown with defending champions Butler & Tristao. Ollie & Ben were bringing form into the tournament, having won the U25s championships together the previous weekend, and it was on full display, with their consistent big-hitting and powers of retrieval sealing an attritional first game of the final.

Having looked relatively comfortable, a dip in concentration came as a surprise, bringing Dave & Dan back into the match — Dan timing the ball to perfection over and over. But in game three Ollie & Ben found their previous form, easing to victory despite their opponents’ best efforts. Final score: 11-7 1-11 11-1. This was their first Fuller Cup, and in fact Ollie’s first time at the tournament.

Special thanks to Julie McIntyre for all her help with the organisation and catering. The tournament could not have been the same without her input. Thanks also to Tom Wakelam for organising the qualifiers, Jan for additional catering, and the City of Durham (including parents) and Durham University clubs for their undying enthusiasm. 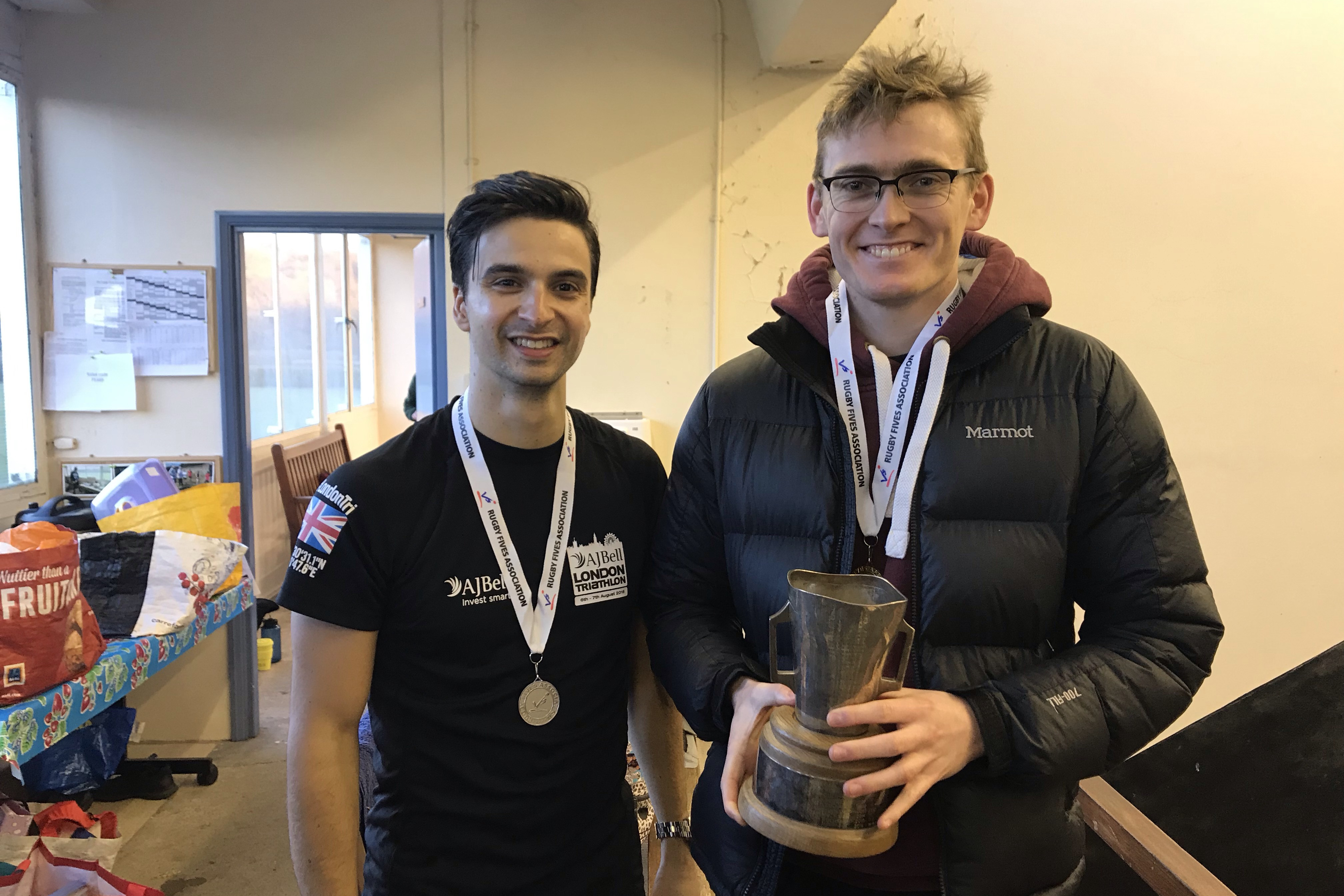 The Singles finalists Dan and Ed 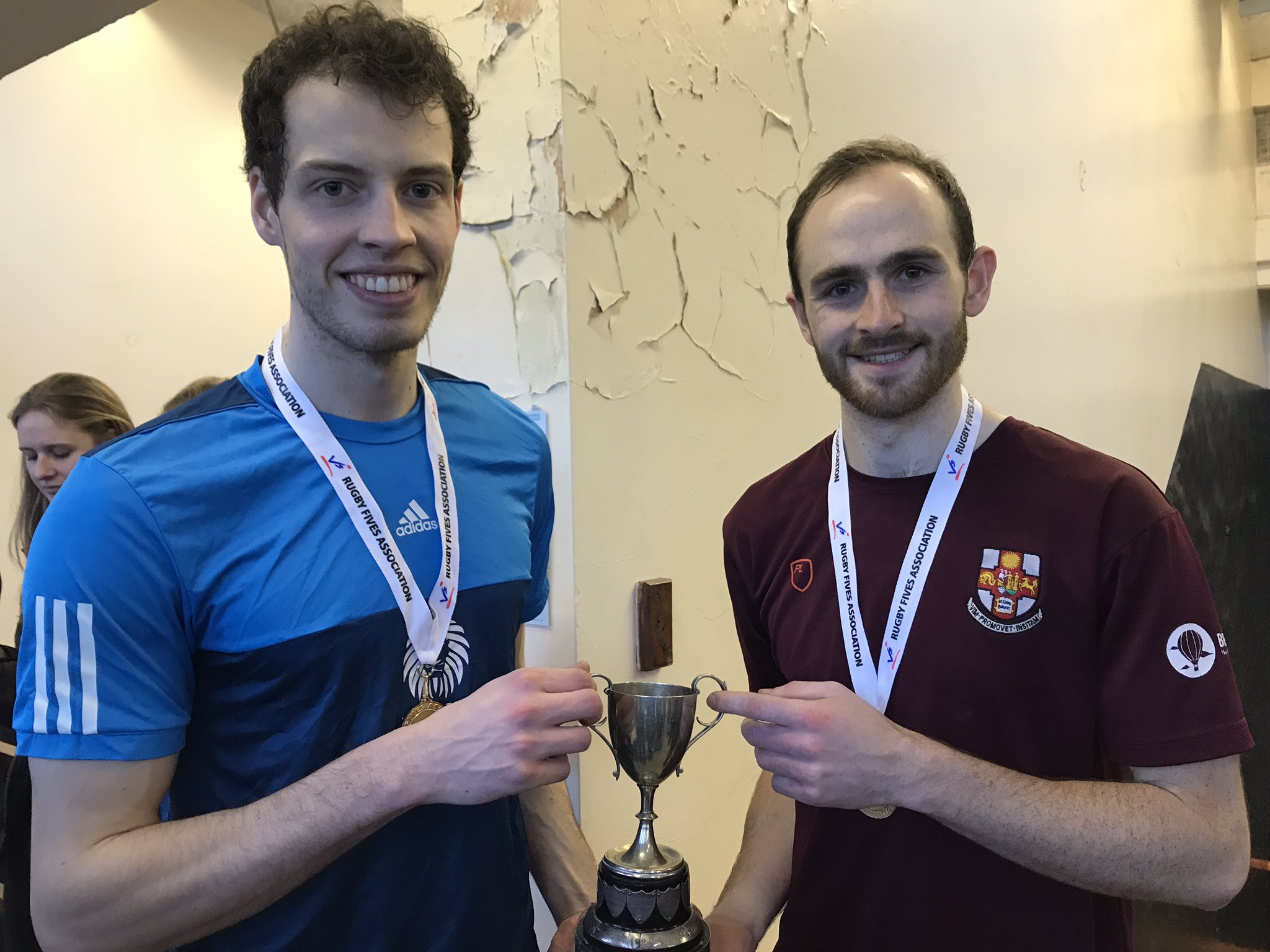 Ben and Ollie win their second title in a row! 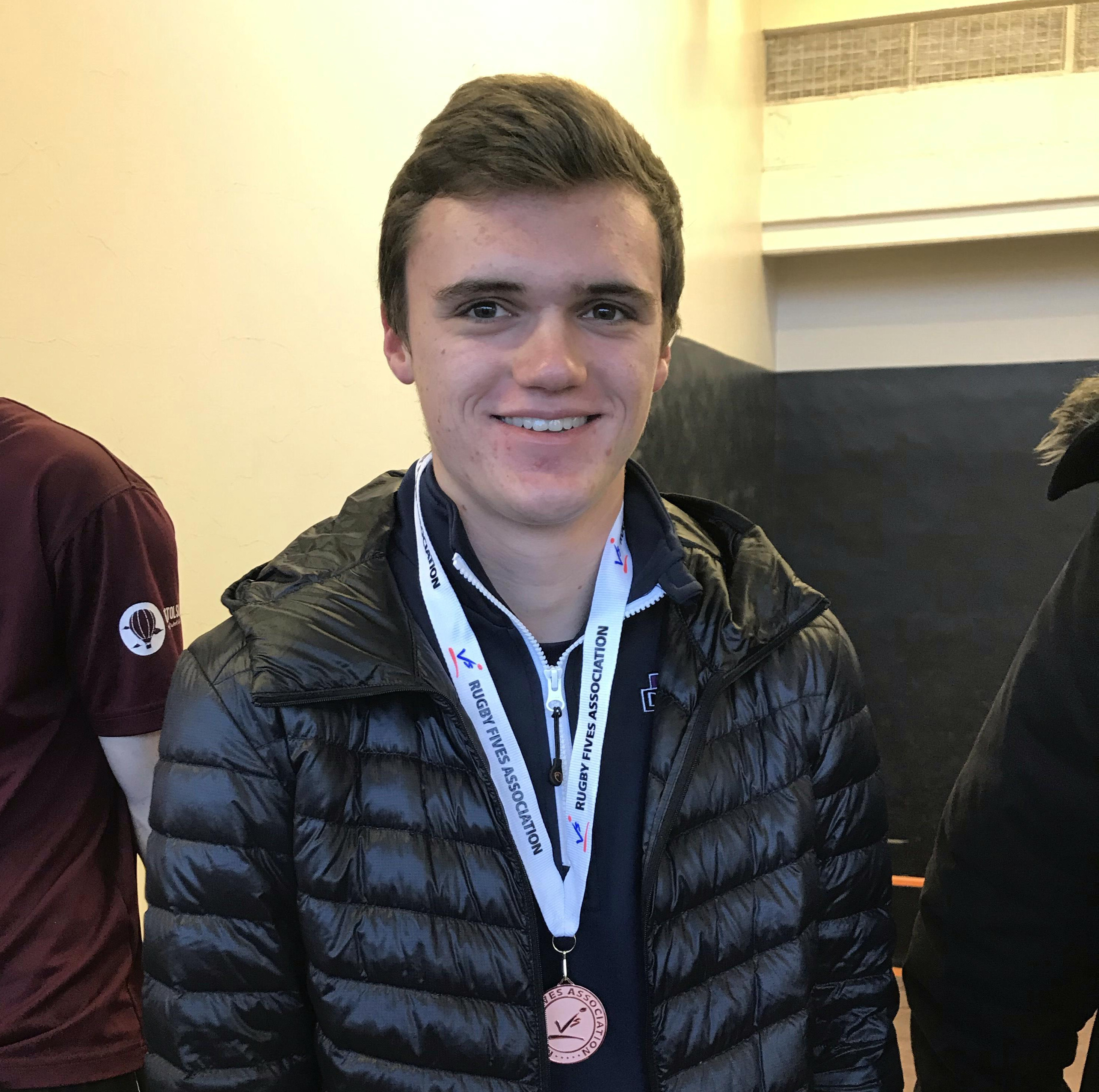 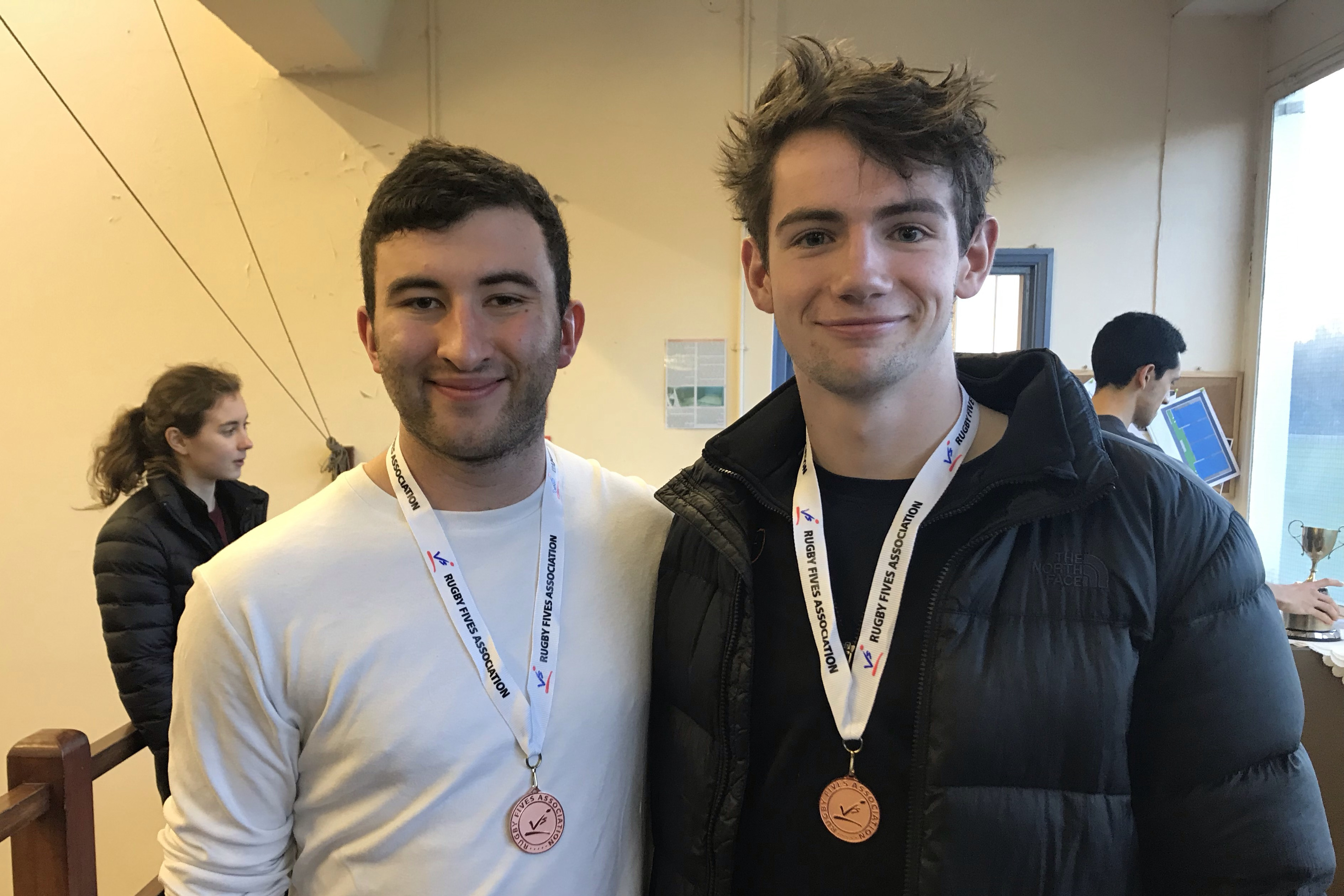 Julian and Archie triumphant in the Doubles Plate 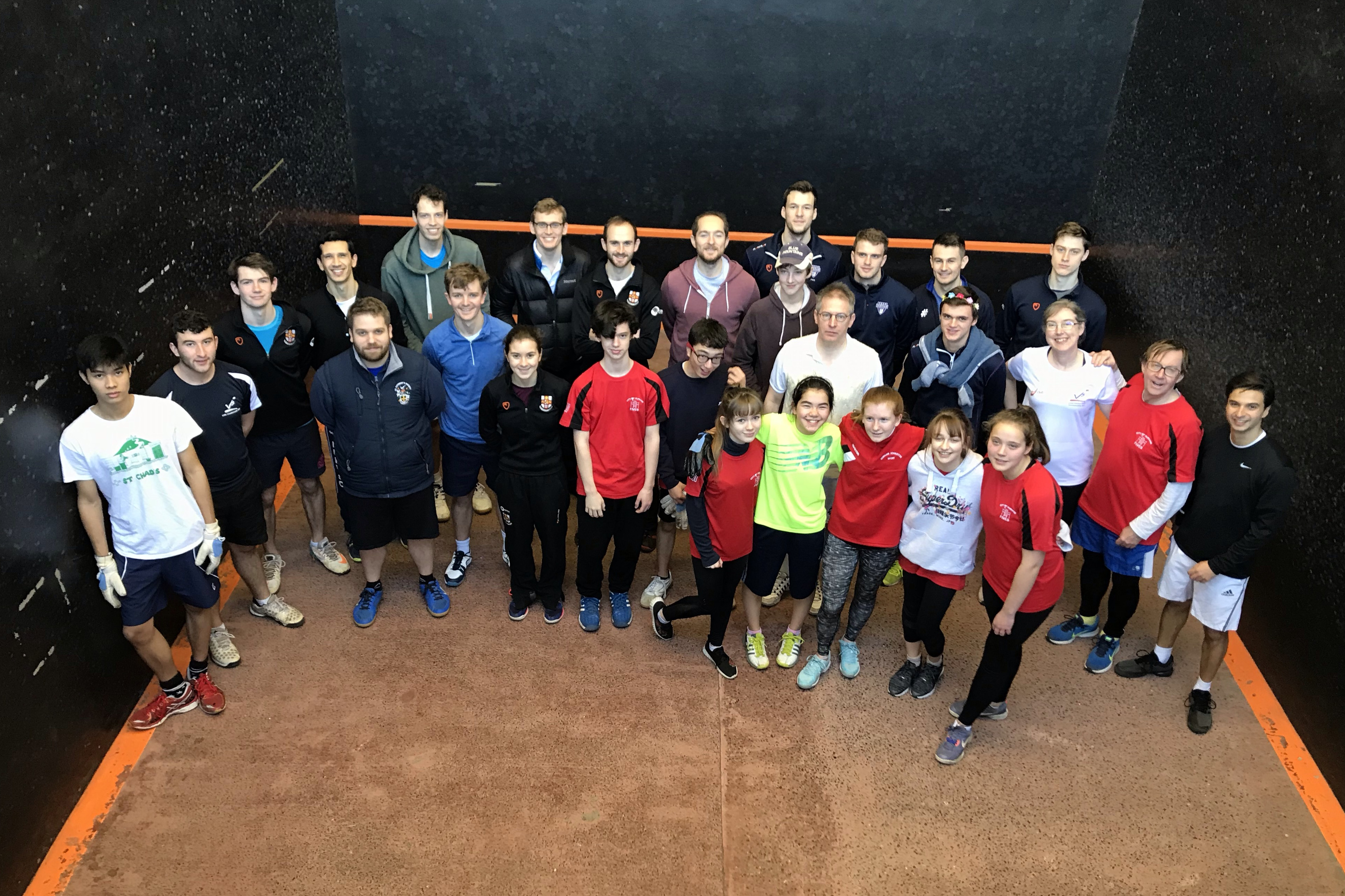