Les grands seigneurs du Fives lined up once more at Marlborough College for the Masters’ Championships, tightly marshalled by the Admiral and gently ministered unto by the Good Doctor Akerman. In fact, however, there was no need of medical care with these sprightly young men: it was Mark Kiteley in the Veterans’ competition who dislocated a finger, but more of that elsewhere ………

In the absence of his customary partner John East, defending champion Martin Wilkinson elected to pair up with fellow Cantabrian (or is that Cantabrigian?) David Hebden. Well, he doesn’t have too bad a record in this Doubles lark, after all. David wasn’t the only newcomer to this event, however, as a new record was set this year: 5 pairs contesting the Admiral’s Cup.

The round-robin was the Admiral Bawtree’s preference; all deemed this an entirely appropriate format, guaranteeing as it did long periods of rest for the majority. It also gave next year’s President ample opportunity for networking and assessing his co-players’ willingness to aid in him in his quest to stabilise the RFA after the shambles of his two predecessors’ tenure of office.

As for the fives: Bev Boag & Frank Akerman and John Hawke & Giles Stimson shared the Mars bar; Neil Arnott & Alan Maltby took the non-existent bronze medal; and Graham Gardner & Bernard Atkinson the equally fictitious silver. Which accorded the outgoing President the particular pleasure of awarding the gold medals and the trophy to the Light Blues: Martin (his 4th in a row) and David (his first).

Which, for those of an archival bent (yes, David Barnes was there too) means that David Hebden has now won every National Open title in the book: National Singles (x1) and National Doubles (x10); Veterans Singles (x5) and Veterans Doubles (x4), Vintage Singles (x2) and Vintage Doubles (x4); and now the Masters Doubles. Were there a Masters Singles, who’d bet against him?

And next year? Well, there is talk of 10 pairs. One thing is certain: turn up the volume – Mr Warner comes of age! 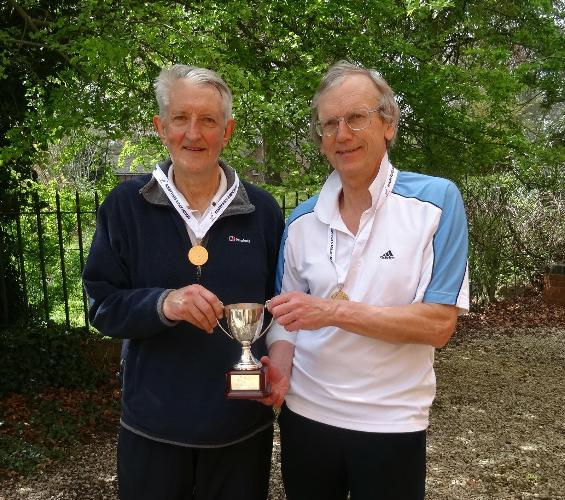