STOP PRESS: For only the third time in the forty-nine year history of the event, a British Universities team has defeated a representative side from the Rugby Fives Association. With a convincing display on the Cambridge courts, one of the strongest student teams for many years won five out of six singles matches and then proceeded to take nine of the twelve games of doubles to achieve a comfortable victory.

Match Manager David Gardner reports: For the first time for many years the Universities were able to field their strongest team, although players recovering from injuries meant that the final decision on this was only possible just days before the event. Not only was this the strongest team available, but arguably the strongest team ever to appear on court to represent British Universities in this annual match versus the Rugby Fives Association.

Hopes were high amongst the students and there was a confidence from the word ‘go’ that a victory might be possible. After all, the team did contain all the National U25 Champions and finalists and a number who had already performed well at National levels.

A lot depended on the Singles, where the students traditionally perform better, but the question was: could they get a sufficient points lead to put the RFA under pressure in the Doubles, which normally favour the senior and more experienced players?

The answer to this was positive – a lead of almost 30 points after the six matches was much better than usual but there were still lots of points to be won and lost in the nine doubles matches to come. The students actually won 5 out of the 6 singles matches, with Charlie Brooks securing the lone RFA victory against Matt Shaw.  However, perhaps the highlight was the stunning victory of Ed Kay against National Champion Will Ellison, which greatly assisted the students in their quest for a suitable early lead.  Ed stormed into a commanding lead in the early part of the match, which he managed to hold  on to despite sterling efforts from Will, who, perhaps not at his very best, was never really allowed to be in control against a very determined opponent.

The early round of the doubles could have been decisive. An anticipated haul of points from the RFA would have narrowed the gap considerably and put the match back on an even keel. However, the students were resilient  and came out three more points to the good overall. An excellent effort, with notable performances from Ollie Arnold & Ben Beltrami, the student 2nd pairing, who, incidentally, were to remain undefeated in all their doubles matches throughout the afternoon, having also won their singles!  In terms of games the BUSF pairs won two out of three matches.

With the second round it was definitely the RFA who were playing ‘catch up’. The students managed to consolidate their lead, win all three matches and add further points to their tally, leaving the RFA a deficit of some 50 points to make up in the final round – an unlikely task, but there were still 90 points at stake! By now, however, the younger players had the bit between their teeth and were not going to let victory slide away, even though in past years this has been the round where lots of points have been lost by tiring students facing the guile of their seniors.  The RFA first pair of Hamish Buchanan & Will Ellison took both games off their faltering  opponents in the final minutes of the event, but it was not enough to alter the inevitable march to victory by the University players, who again won the final round by two matches to one.

The RFA were hampered by an on-court arm injury to Matt Cavanagh which certainly restricted his performance and perhaps by an ‘ultra fast’ fives ball in one match, which certainly favoured the power play of Ollie & Ben! However, the overall performance of these young players can only be encouraging for the future of the game. Let’s hope that they all continue playing for many years yet.

Incidentally, for advance warning, five of the students could be available for the team next year, which will be the 50th match of the series. 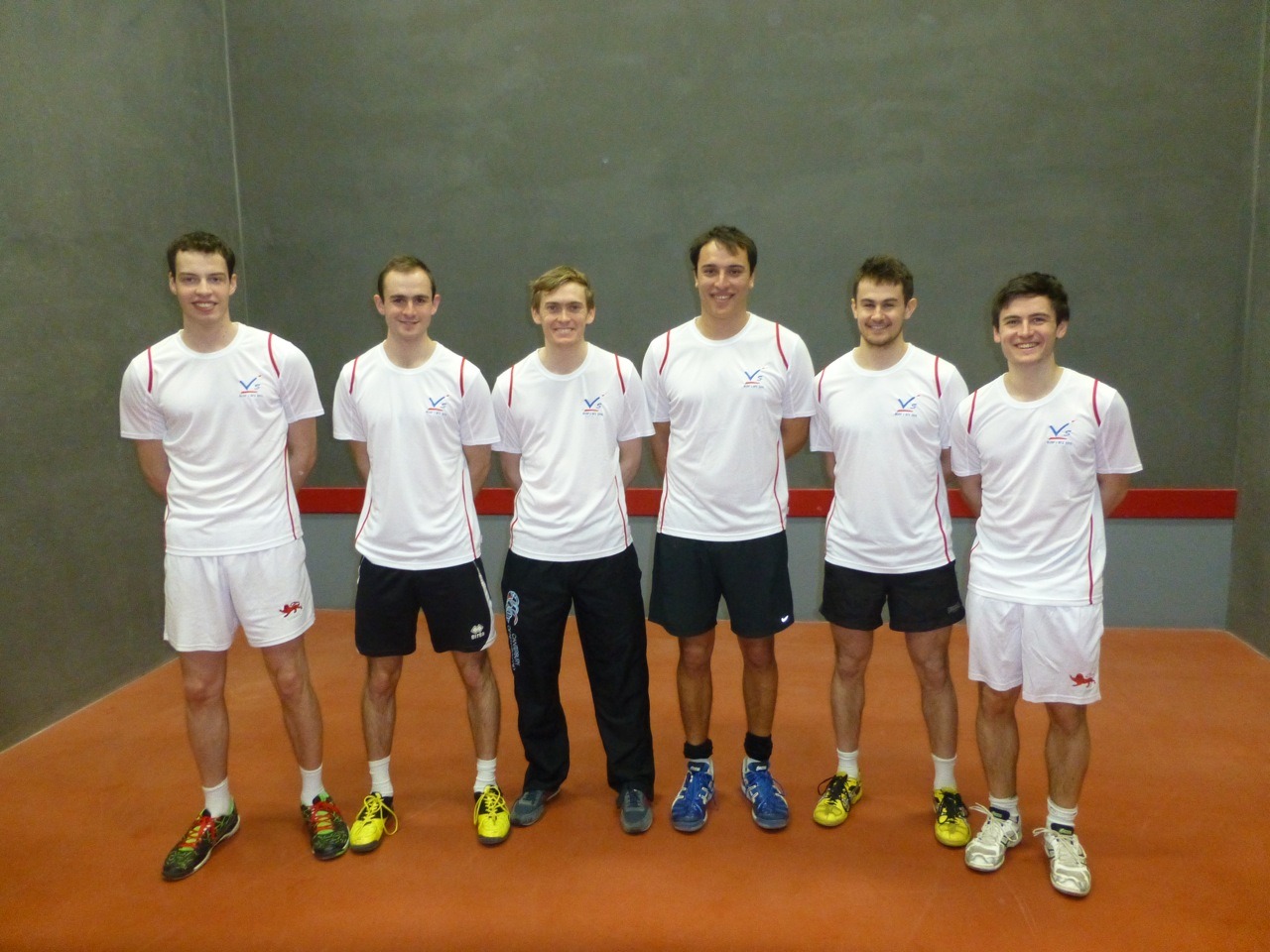 The winning BUSF student VI – from Bristol, Cambridge and Durham