Julie McIntyre reports: It was down to the wire for the City of Durham Ladies competition in 2021, with the organiser coming back from Covid-19, one of the courts used for storage until the day before, and a few others unable to make it — all bets were off!  Thanks go to D & P Trophies also, who made a replacement medal for us and delivered it on Saturday morning!

Tom Wakelam was in the hot seat for the Singles on Saturday, doing the draw and weaving his magic to sort everyone into age groupings, as well as an overall knockout competition.

There were quite a few close-fought games and some very well-matched opponents. At one point we had the National U14 champion playing the National U16 champion, and there were plenty of first time match-ups, so anything was possible.

I hope everyone enjoyed the streaming from one of the courts (thanks to Phil Beattie). The game footage will be tidied up and available on our website shortly (https://cityofdurhamfives.uk/about-fives/).

Congratulations to Camille Beattie (City of Durham) on winning the overall competition, plus the under 16 category, to Kirsten Bell (Durham University) for winning the Over-18 section, and to Holly Brown (Edinburgh Academy), who won the the Under 18s. There was great promise shown by the other girls — we look forward to seeing them all develop over time.

As always, everyone played in the spirit of the game, and had a good laugh too. And they were all ready for their dinner in the evening!

Tom also produced the Doubles draw for Sunday. No age-groupings this time, just two pools of round-robin games, then play-offs for first, second and third place.

This time Kirsten Bell & Sophia Breese (Durham University) beat Camille Beattie & Leah Hogarth (City of Durham), with Poppy Atkinson & Imogen Wright (City of Durham) coming third in a play-off against Rosa Ogilvie & Olivia Smart (Edinburgh Academy). Again, there were plenty of close games, with not much in it, sometimes creating a bit of a headache for the organisers!

We finished off with a big free-for-all pile-in at the end, with a few extra players, and everyone went home exhausted.

Many thanks to Tom, Phil, Yasuyo, Tony, Josey, Geoff, Richie and Jo, and the boys who came along to support. We look forward to next year. 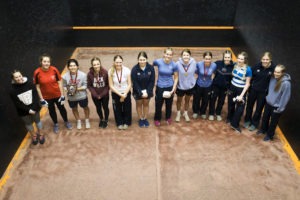 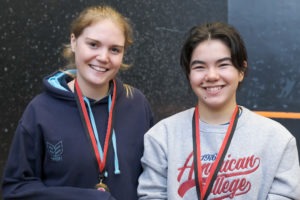 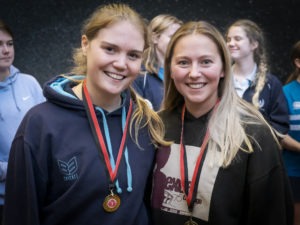 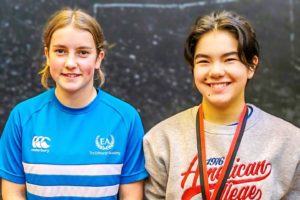 The U16 Singles finalists