Ian Fuller defends his Vintage Singles title and wins the Doubles for the fourth time, this year with David Hebden.

Bob Dolby reports: In a Vintage Singles competition notable by the absence of Wayne Enstone (hip), Bob Sandie (Knee) and Phil Atkinson (hamstring) it was Ian Fuller who asserted his dominance of the Over 55 category by beating Tony Hamilton 15-0 in the final. Ian had previously enjoyed comparatively easy wins in Pool A over new boy Peter Westwood and organiser Brian Kirk (“Peter was filling in for Bob; I was filling in for Phil”), while Tony took the hard route in Pool B, beating first Dick Warner 15-13, then Stuart Kirby by the same score. Not surprisingly Tony found Ian’s leg-sapping cross-court shots and nagging length a challenge too far in the final.

In the Plate Brian triumphed over Peter to win his first silverware in a Singles competition – the third Derby Moor player to win the John Hawke Plate in the ten years of its existence.

The Doubles competition was swelled by the arrival of Grem McIntyre, John Hawke, Mark Kiteley, Dave Hebden, Andy Passey and Bernard Atkinson. From the two pools Ian & Dave emerged to play Bernard & Andy in one semi-final while Stuart & Tony took on Dick & Brian. The outcome was the expected contest between Ian & Dave and Stuart & Tony, which progressed slowly to 8-all before Ian & Dave tightened the screw as so many times before and came out winners 15-8. It was their first final since the Cyriax in 2004 when they had experienced a bit of difficulty with Hamish Buchanan & Robin Perry!

While the main final was being played over one game Mark Kiteley & Peter Westwood took on Grem McIntyre & John Hawke in a three-games-to-15 Plate final (“Well, it is a national event after all – and we want to get our money’s worth.”) Once Mark and Peter had sorted out who was going for which balls they managed to keep their noses ahead and win in two straight games, 15-12, 15-13.

As is nigh on traditional in this event there was only one boule to award to Mark and Peter, so by common agreement it went to Peter on the basis that, though he was not a member of the RFA, he was at least in the RAF and Mark still had one in the trophy cupboard from the Derby Moor Doubles.

Ian meanwhile did get the correct silverware as can be seen below.

And one of our competitors was moved to verse:

Brian Kirk did all the work,

Ian Fuller did us muller,

The Dep. President on experience lent

Whilst Dick Warner shunned the corner,

Grem McIntyre went to the wire

And Peter Westwood thought it good. 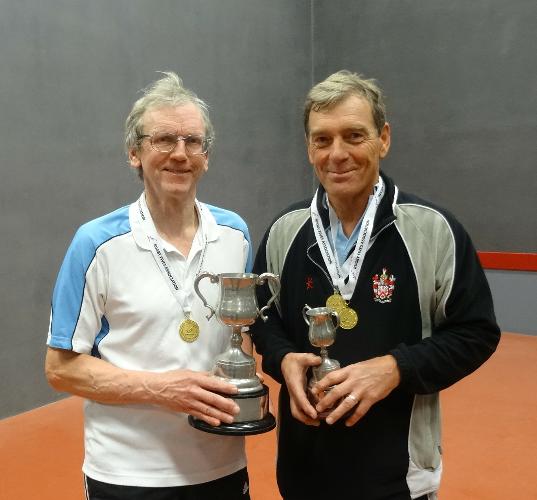