STOP PRESS It was a double for Ben Beltrami as he added the U25 Singles title to the British Universities crown he won in November. And it was a a second Doubles title for Ben and his partner Ollie Arnold as they made a successful defence of the title they won together last year. Other notable successes were Tom Watkinson reaching the Singles final of this event for the first time, after a victory over last year’s runner-up, Andrew Boyd, in the semi-final. And organiser James Smith finally won the Singles Plate after a number of near misses. Archie McCreath and Jeremy Manger got their name on the Doubles Plate after a display of mighty hard-hitting in their final. And, in this ever inventive tournament, — brilliantly organised and expertly managed by James — Joe Sumner won the extra Third Round Losers Plate. Sadly we say goodbye to Theo Parker and Matt Shaw, among others, after nearly a decade of participation.

Organiser James Smith reports:  Once more, the great and the good of the next generation of fives players descended upon Oundle School for another action-packed weekend of fives. With a much larger entry than in 2019 and early start times (and late finishes) scheduled for both days, there were a lot of matches to be played.

The first round of the Singles was an opportunity for some of the unseeded players to get on court early and prove themselves, with most of those progressing making light work of their opponents. The second round had more capacity for shocks, as the seeded players were all in action. Addie Chai was narrowly edged out in three games by Jack Sissons for the biggest upset to the seedings, while Dan Whitham, having missed the tournament in 2019 with the rest of the Oxford contingent, marked his return with a good win over organiser James Smith. The rest of the draw progressed as expected, with the top seeds cruising through comfortably.

Round three proceeded per seedings, as the top eight seeds duly progressed, with the pick of the games being Ben Jourdan’s three-game comeback against Lewis Keates. The quarter-finals also proceeded according to seeding, with the top four seeds all winning in straight games.

Ben Beltrami progressed past Matt Shaw with relative ease on the Saturday evening; however, due to time constraints Tom Watkinson and Andrew Boyd had to return on the Sunday morning having played just one game; Watkinson eventually upset the seedings in straight games, having battled in the morning to win the second 16-14 from 5-0 down. Unfortunately for him, the exertions involved in doing this proved too much, with the final going comfortably Beltrami’s way to hand him a first U25s Singles title.

While the main draw was occurring on the Saturday afternoon, the 22-strong Plate competition was progressing in time-honoured fashion of best-of-three to 6. Smith progressed through one half of the straight knock-out comfortably, while the other half of the draw also took longer than expected, with the other semi-final between Chai and Naum having to come off court at one game apiece, to return on Sunday morning as well. Unfortunately, Chai had to progress after Naum was let down by the Oxford teammate who was meant to drive him. This gave a final match-up between Smith and Chai, with the former battling back from 9-5 down in the first to win the Singles Plate after multiple near misses.

This then brought on the Doubles. As before, the first round provided the opportunity for some tight games, for example Manger & Thornhill narrowly edging out Oundle schoolboys Crawley & Hollund 15-13. The second round was more chaotic than predicted – Law & Suddaby beating Keates & Raheem in questionable circumstances; while Sissons & Marshall managed to shock the seeded Oxford pair of Kirwean & Whitham 14-16 15-11 16-14. This then precipitated the predictable Oxford exodus, as none of their pairs progressed past the second round and then elected not to enter the Plate – proving that some things never change when it comes to the less important universities! As McCreath had lost his partner at the last minute the previous day, he stepped in the partner Manger in the Plate.

The quarter-finals and semi-finals provided an opportunity for some hard-hitting fives to be put on display and the games certainly didn’t disappoint, with high quality doubles played throughout the draw to give a repeat of last year’s final. Unfortunately Parker & Shaw were unable to give themselves a triumphant  swansong in their last year of the U25s, as they came up against a brutal display of power and control from defending champions Arnold & Beltrami, who thus gained  their second win in this event.

The Doubles Plate consisted of two round robin groups, playing one game to 11 in some fast and furious fives. This produced a final of Manger & McCreath versus Keates & Raheem. The former pair won out in a tense three-game final to give McCreath his second plate and Manger his first. As it happens these two played each other for the Singles Plate last year!

I would like to thank Oundle School for once again allowing the RFA to stage the U25s tournament on their spectacular courts, and I’d also like to thank each of the 39 singles entrants and 21 doubles pairs for taking the time to enter and play some high quality fives. 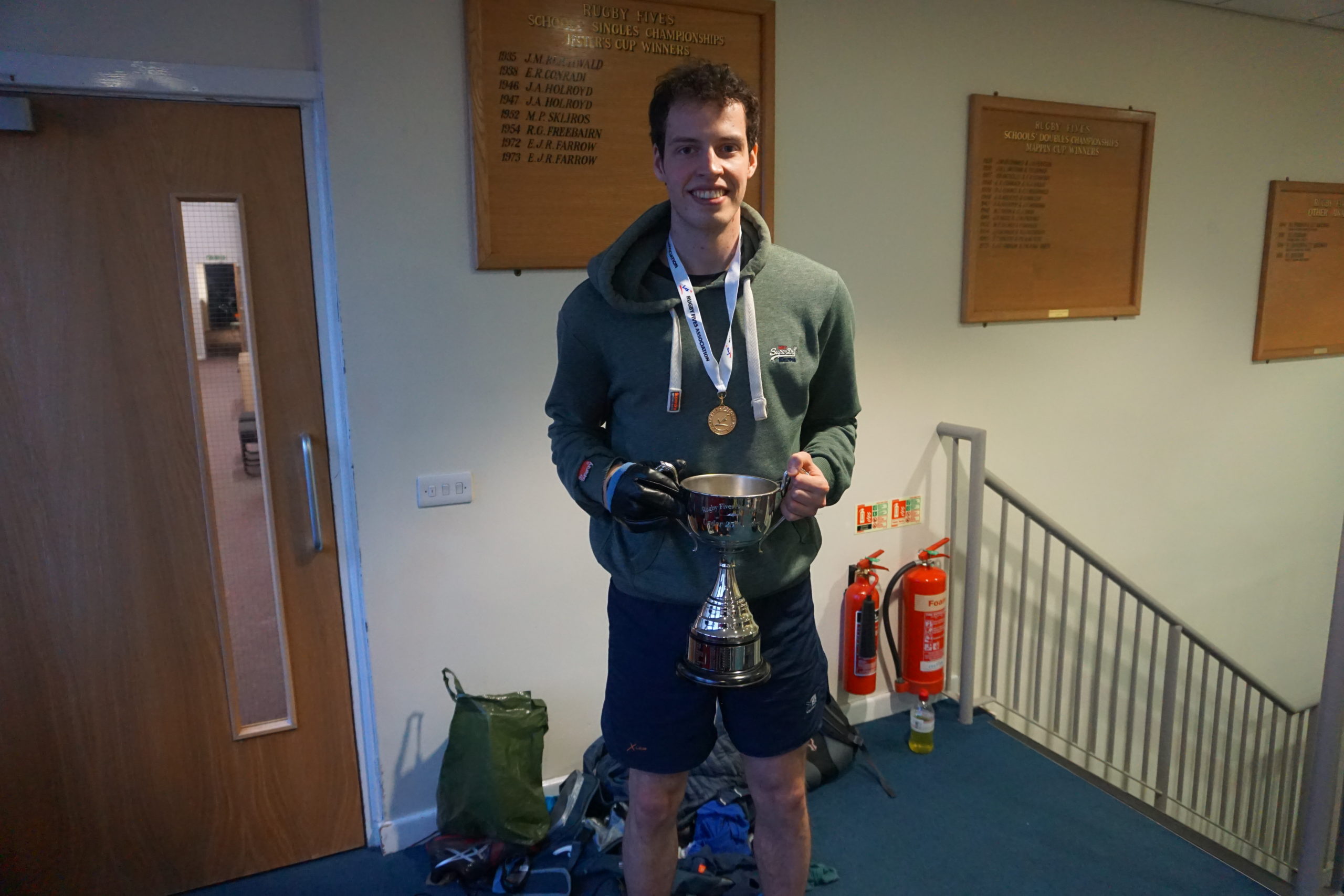 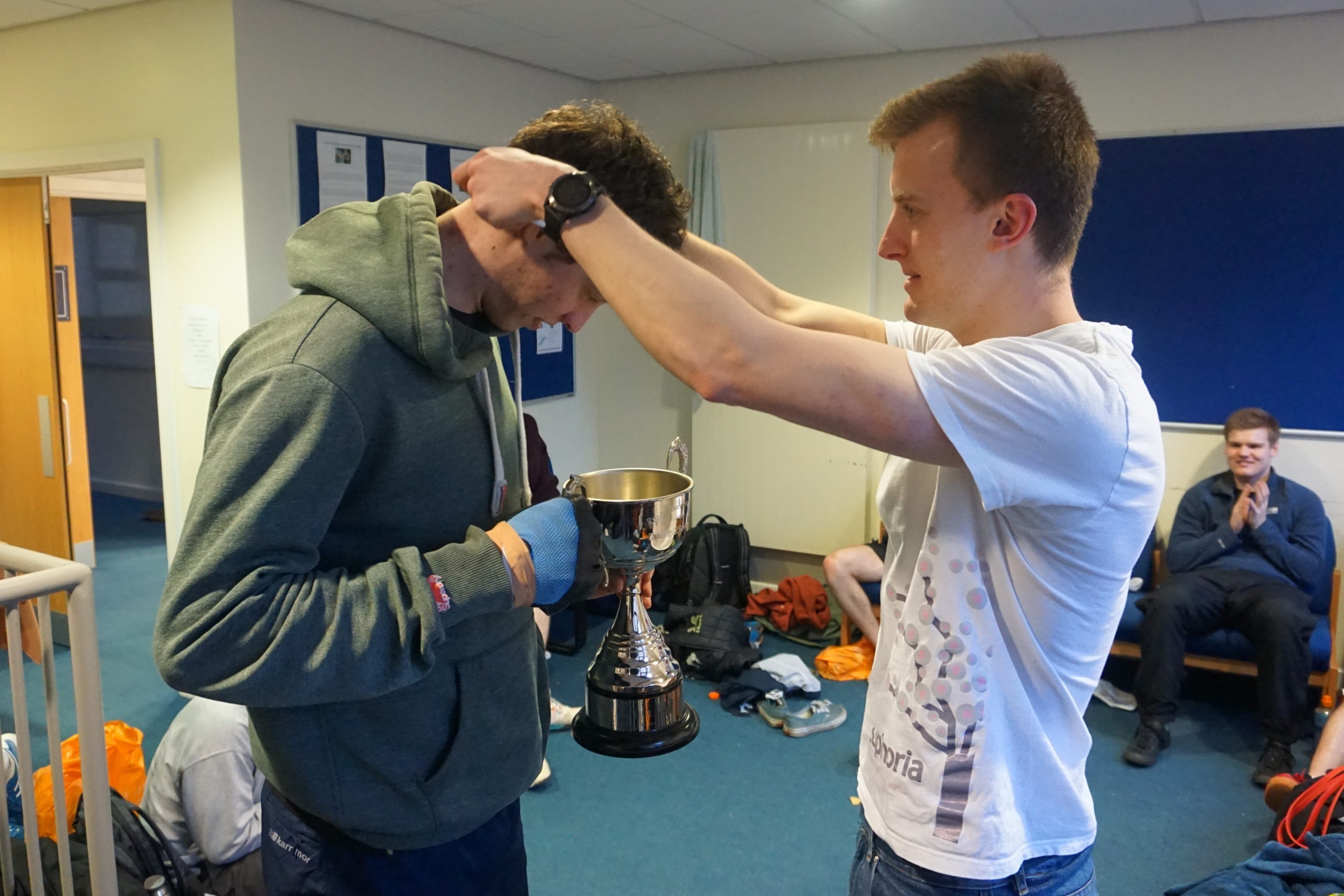 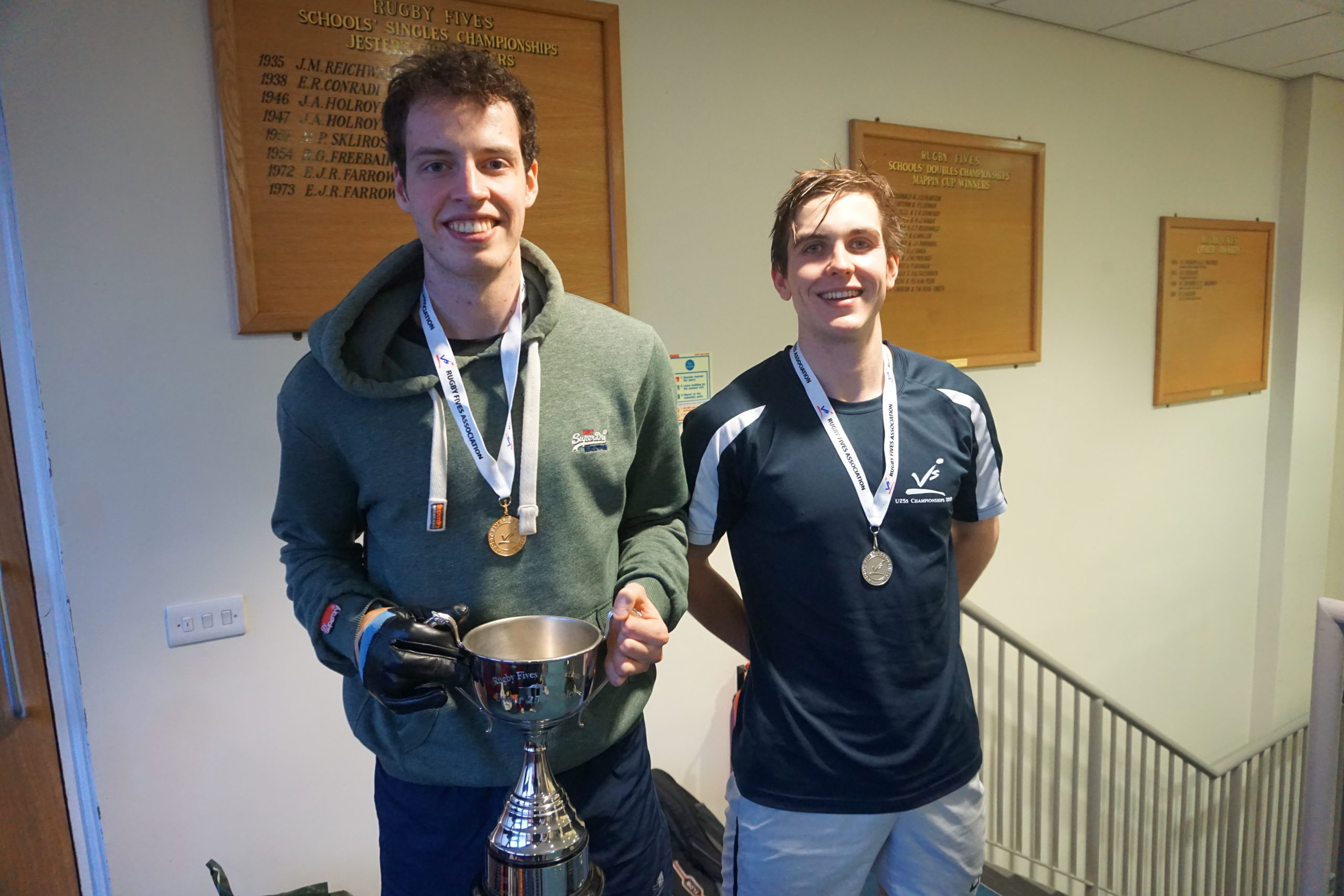 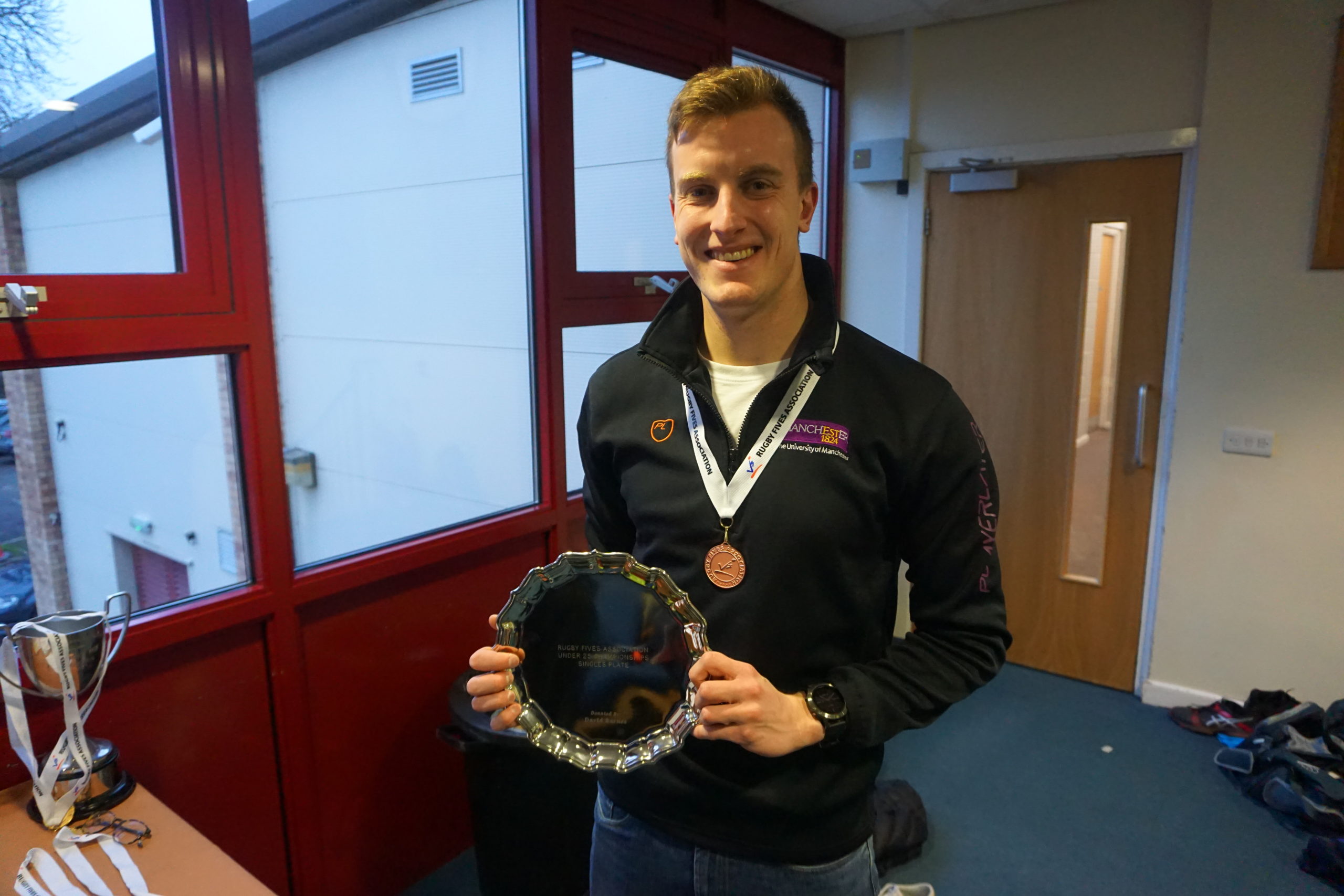 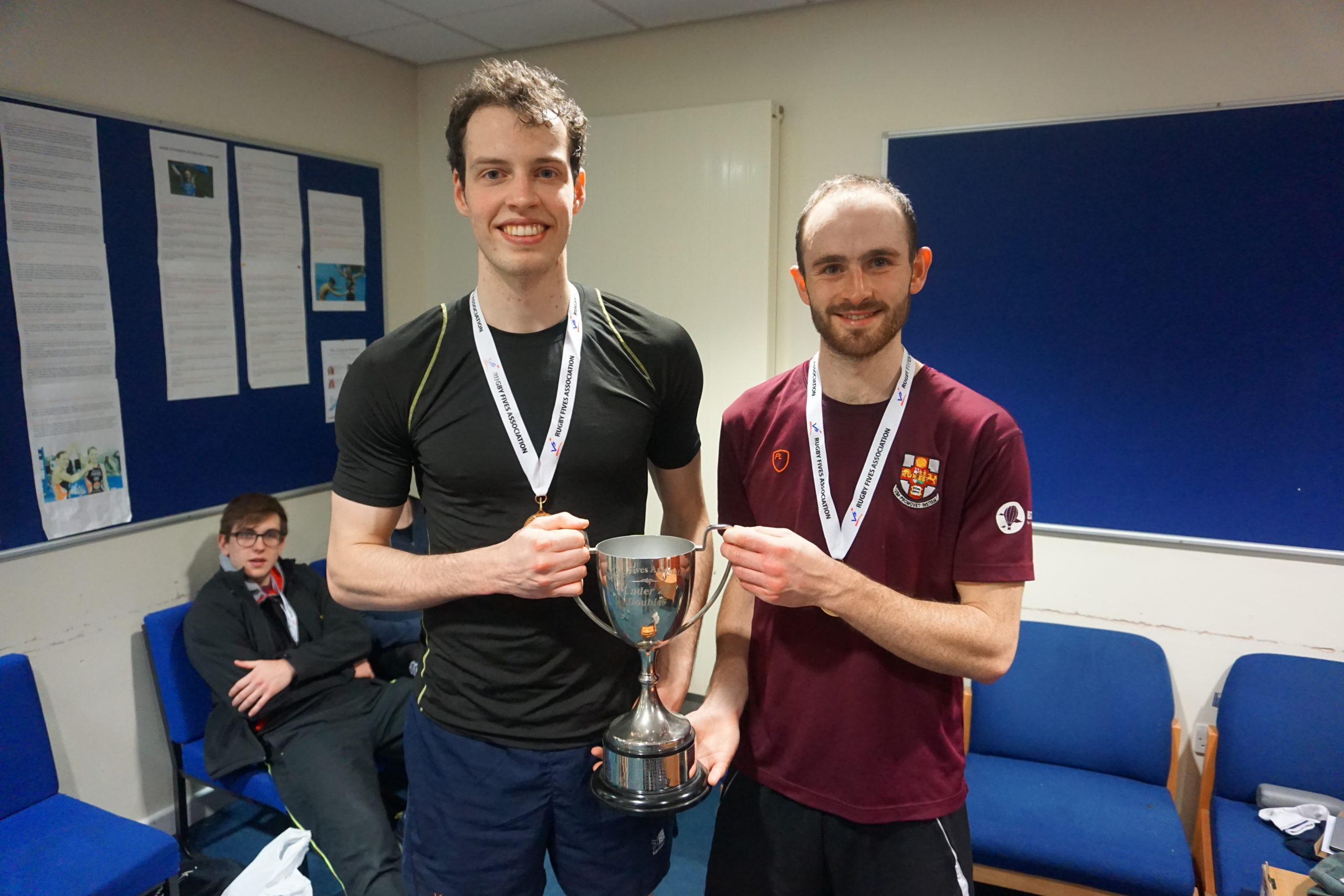 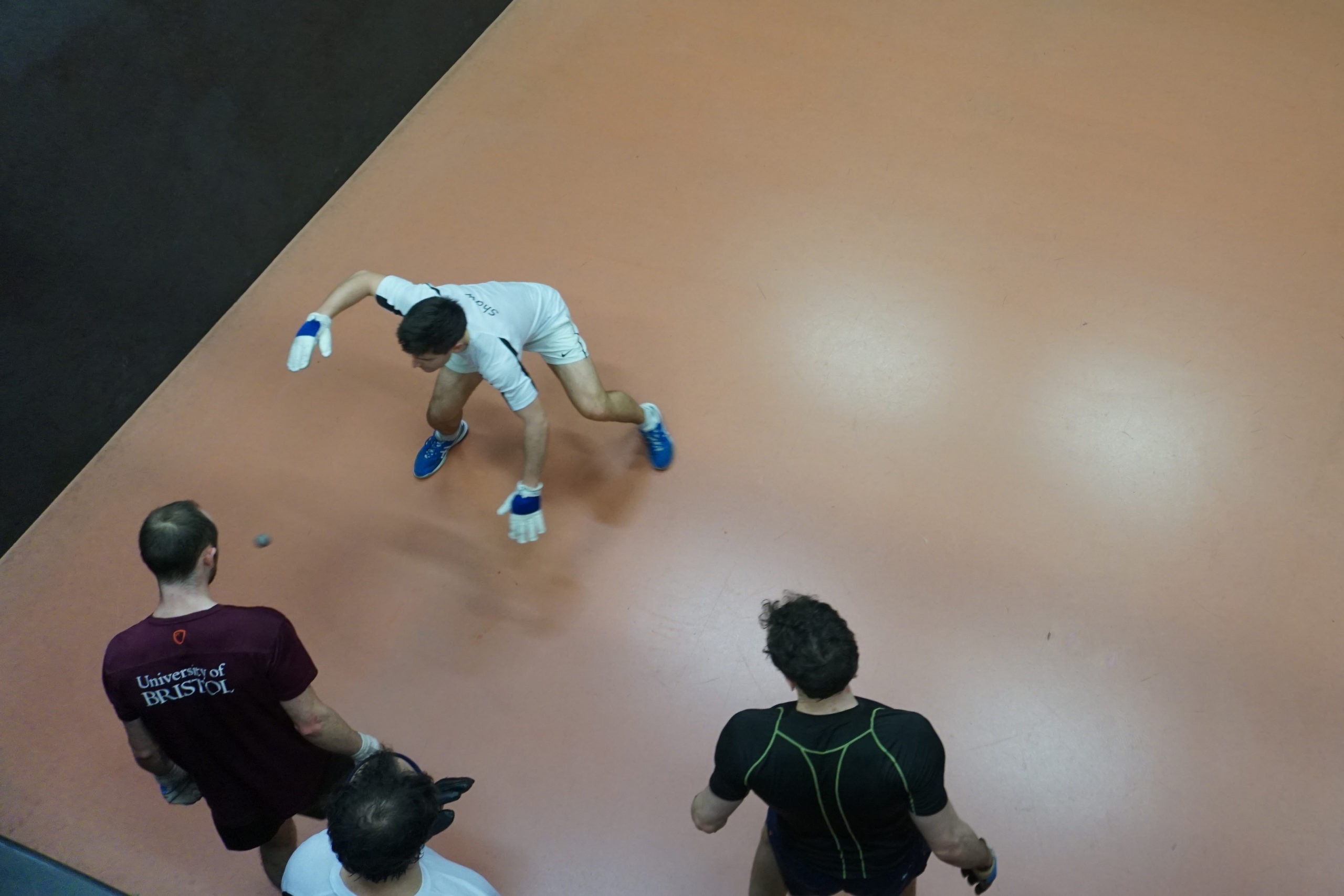 Matt in back wall action 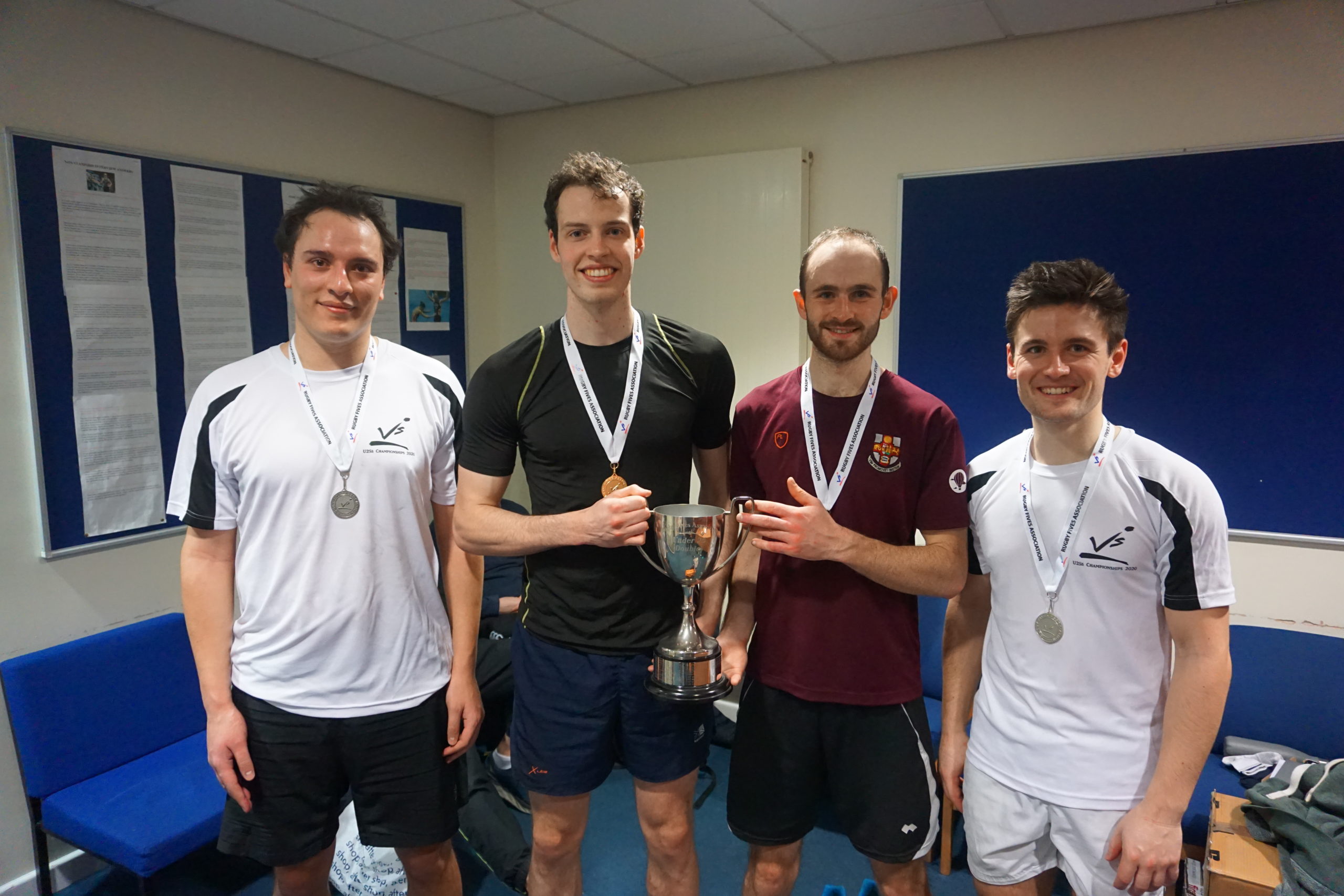 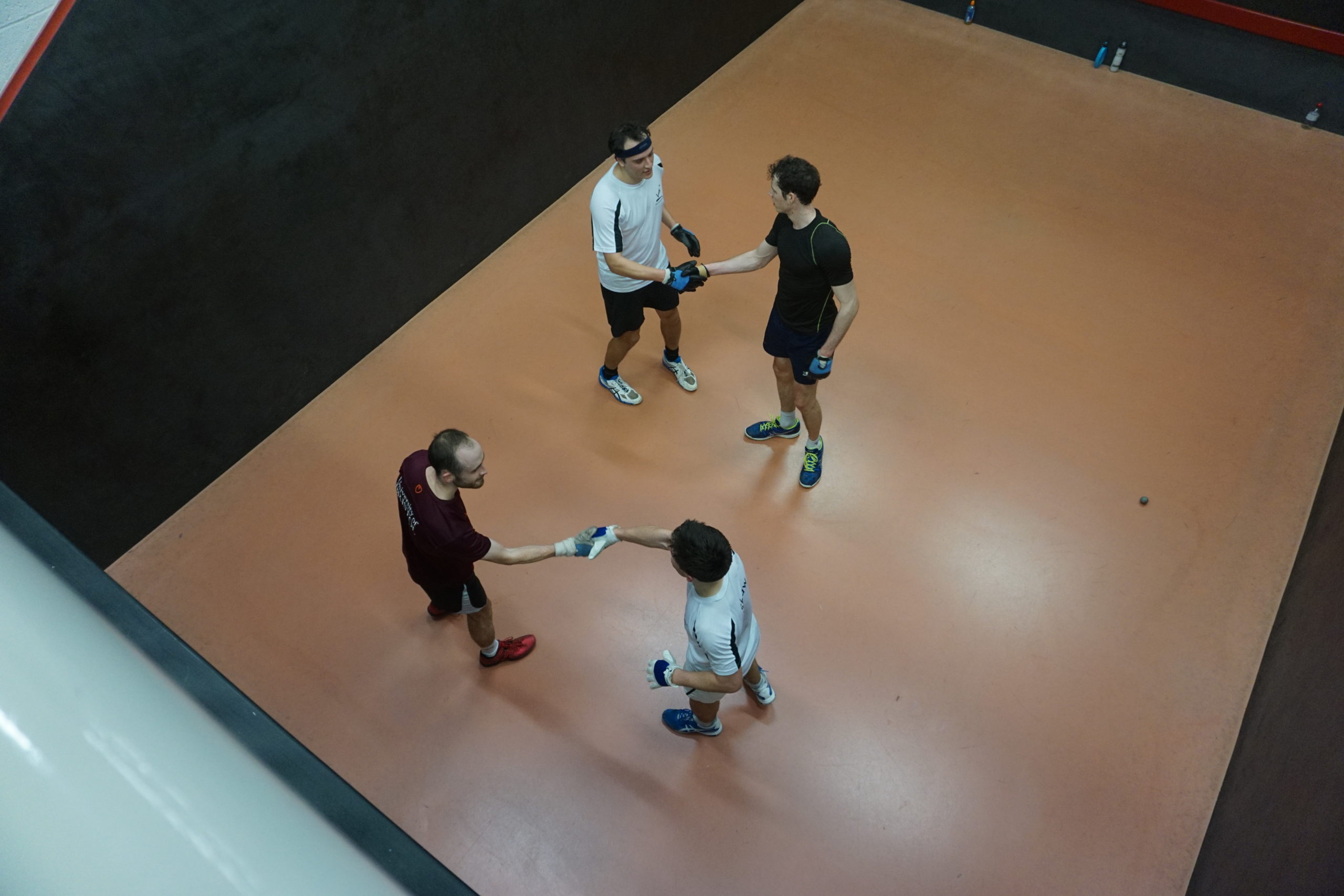 Theo and Matt for the last time in this event 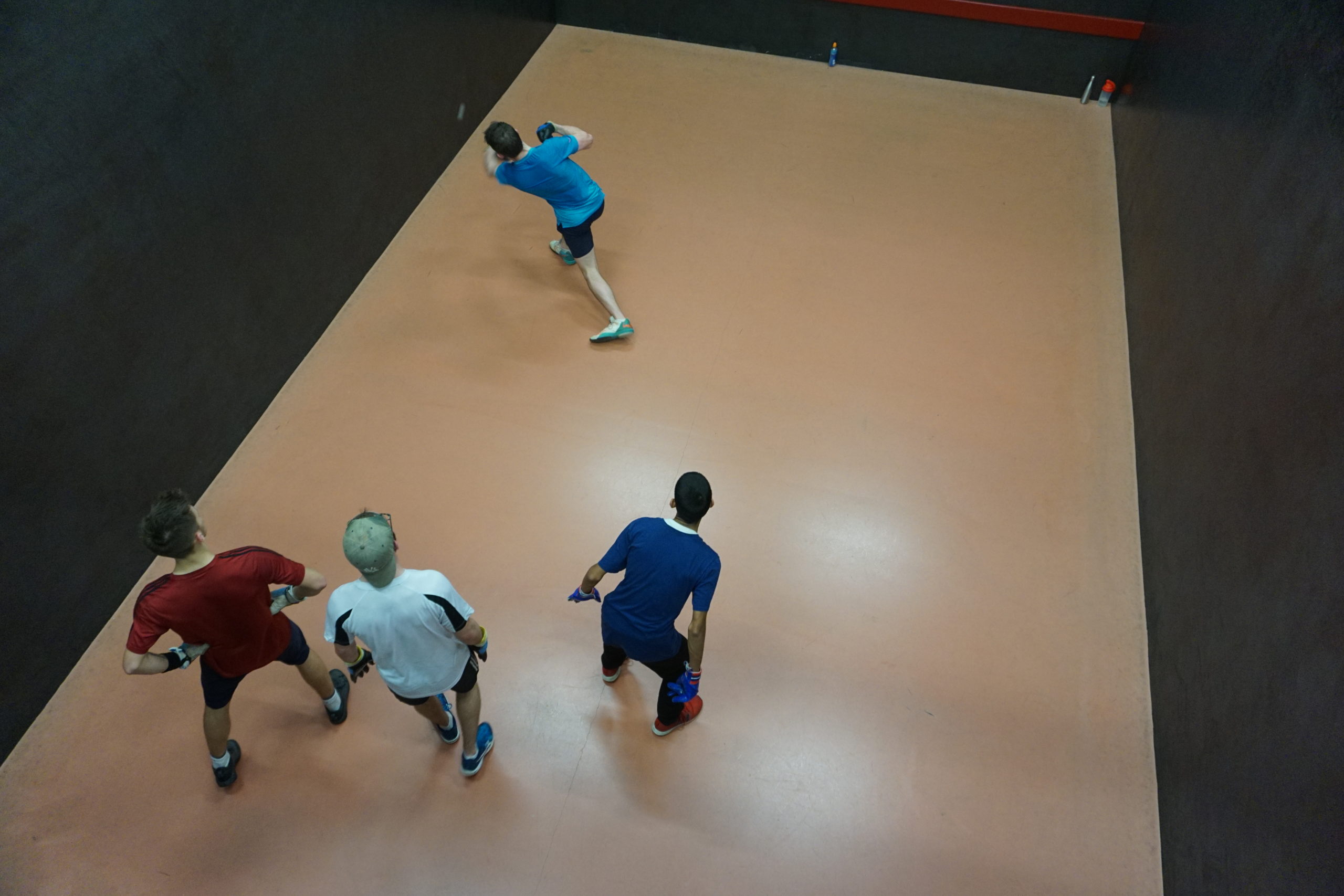 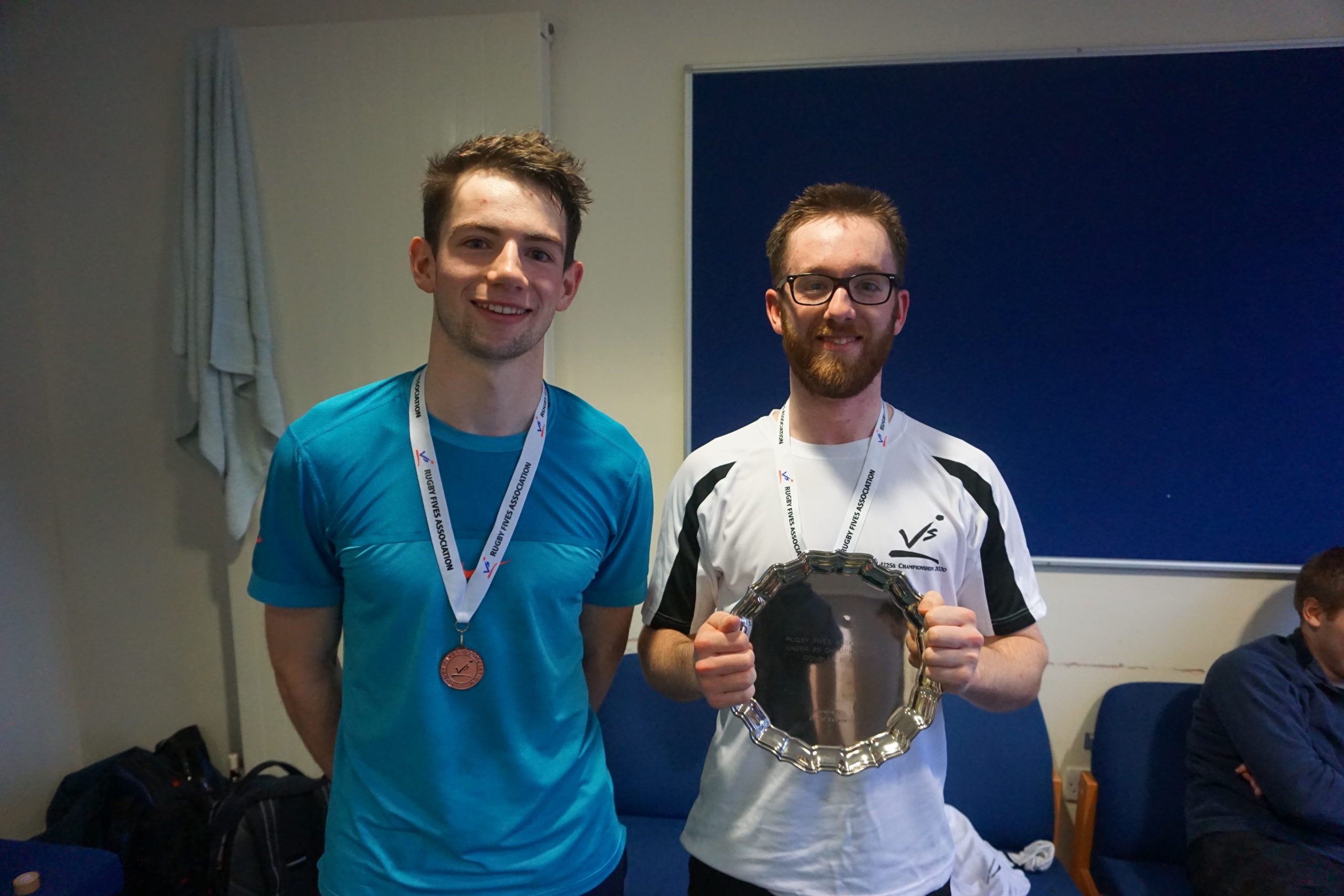 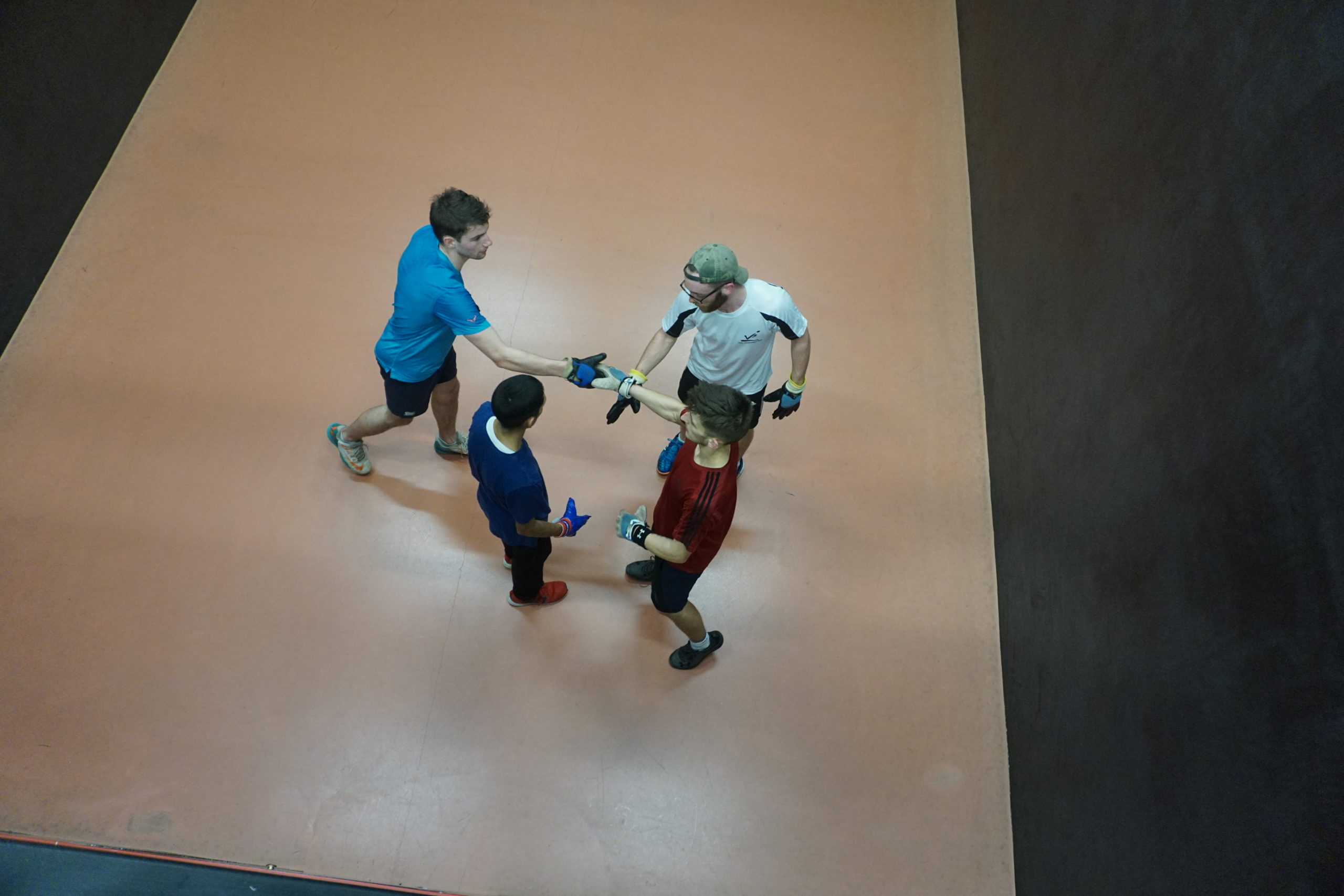 Handshakes at the end of a tough Doubles Plate final