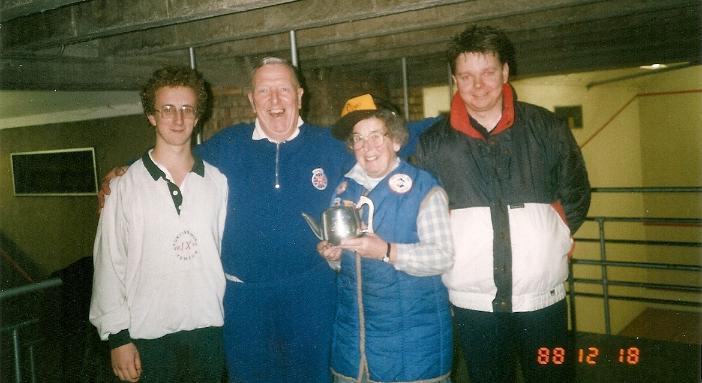 The RFA is sad to announce the death of Joan Wood. In the words of her son Reeve “Joan passed away peacefully on Sunday 17 August 2014 and is now gardening and gallivanting, jam making and junketing and looking for more interesting quiz questions elsewhere. We hope the bush telegraph is working and Tom and Freddie get prepared for high jinks on the horizon.”

David Barnes writes: 1947 was a special year. It was the year in which Joan Inge married Tom Wood, and by happy coincidence it was also the year of the foundation of the Rugby Fives Association Club, whose first AGM, held on September 15th that year, Tom attended and in whose fortunes he and Joan were later to play such an important role.

Joan was, as she liked to point out, one of five children and the mother of five more, so it was no surprise that Fives played a considerable part in her life. And that it certainly did, especially in the 1970s and ‘80s, when Tom took on the Secretaryship of the RFA Club and set about running it in his own inimitable way. The two of them went on safari to almost every known Fives court – and to some previously unknown ones as well – in those twenty years, and for many people they became the representatives of the game itself. Later, Tom would say “I couldn’t have done it without Joan, you know” – and he meant it!

One of Joan’s major contributions was in the culinary department. Her catering at various Fives events from the early 1970s onwards was legendary, and Wax Chandlers Hall became the venue for many a happy occasion, welcoming AGMs of both the RFA and particularly the RFA Club with gargantuan spreads, and entertaining John Carey’s USA touring teams in royal fashion. Joan also provided copious sustenance for players and spectators at the President’s Cup for many years, as well as for early editions of the Winchester Doubles tournament.

The Woods were generous donors of trophies: the Wood Cup for the Inter-Club Knockout, the ‘Barnes Bridge’ scale model, and the subsidiary trophies for the President’s Cup – the ‘T’ Pot, the Love Mug and Joan’s own special Mate’s Plate – all bear their stamp. They will always be associated with these competitions, and of course with the RFA Club, which they animated for those two decades of joyous activity, involving unbelievably over 100 fixtures in 1984! They didn’t quite attend them all – that would have been impossible, even for them – but they travelled the length and breadth of the kingdom and beyond, even to the extent of organising three enjoyable visits to New England. The 1987 touring team, led by Joan as non-playing manager, were christened ‘Joan’s Jesters’, and a special badge was commissioned for them to wear. 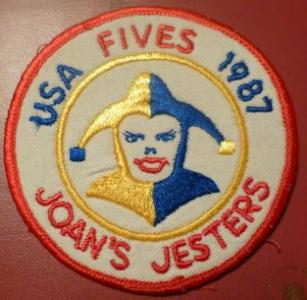 It was typical of Joan that after Tom’s death in 1994 she always made the effort to come to Merchant Taylors’ for the President’s Cup, even when the journey from Epping Green (and back again) on a December Sunday became a real challenge to her. She did it for Tom, and for the pleasure of seeing old friends and new young players taking part in the competition which meant so much to them both. When she finally left Essex to move to Nottinghamshire, the journey became too demanding, but she was still there in spirit, and the Mate’s Plate (when available) stood in for her!

Joan was made an Honorary Life Member of the RFA Club and of the Association for her unique contribution to Fives, and she will be remembered with huge affection by all who knew her. 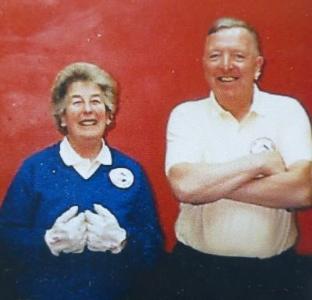