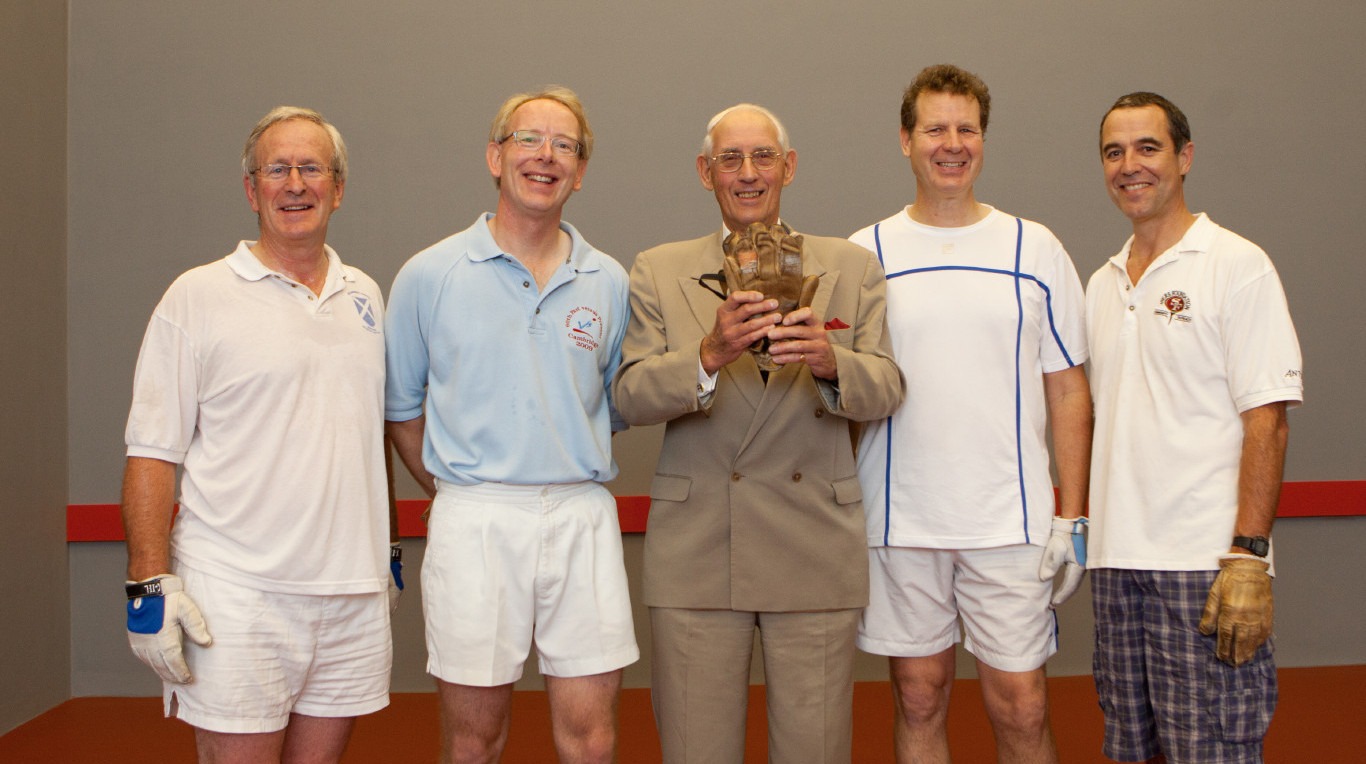 The RFA is sad to report the death of John Evans, the man who brought Fives back to Rugby School

Dick Warner writes:  John (always “Jock” to his generations of pupils) Evans, who died on 3rd February 2021 aged 87, was a super-talented man (an able sportsman, very musical and a first class amateur actor), with a gentle sense of humour, and strong on self-mockery. A committed Christian, he gave his time generously to support faith events and camps, and became a churchwarden, and organist, in retirement at his local church in Easton.

All fives players — all court game enthusiasts — owe him a massive debt, for restoring fives to Rugby School.

Educated at Bristol Grammar School, where he became head boy, John played both Rugby Football and Rugby Fives; he subsequently represented Bristol Rugby Football Club and went up to Worcester College, Oxford, to study classics. There he sustained a serious knee injury playing for the university, which prevented his winning a richly deserved Rugger Blue. Happily, he could still play Fives, winning half-blues in 1955, 1957 and 1958.

A tall, hard-hitting, left hander, John played a lot of fives after university, in particular for the Jesters Club. RFA archivist David Barnes recalls “I remember him and Mike Scott coming down to Winchester in 1959 to play for the Jesters. I hadn’t seen the ball hit so hard — when I managed to sight it, that was.”

After the mandatory two year National Service, John reluctantly decided against a career as a concert pianist, instead taking a job teaching classics at Blundell’s (1958-63), then moved to Rugby (1963-1981) where he became master in charge of fives 1967-73, following John Inglis, and succeeded by Tony Tiffin, as well as housemaster of Kilbracken House.

He left Rugby to become headmaster of Brentwood School (1981-1993), alma mater to author Douglas Adams and footballer Frank Lampard, where he proudly took the school co-educational. His valedictory event, before retiring to Somerset with his wife Vyvyan, was to play a Mozart double concerto with the head of music, David Pickthall, to rapturous applause from the assembled school and parents.

To the fives world, John attained legendary status in 2010 by achieving what most people thought impossible — bringing back Rugby Fives to Rugby School where it had originated. In 1989, the four existing courts had been bulldozed to make way for a Design Centre, when Rugby decided that its future lay in admitting girls to the previously male-only school, thereby denying them, and incidentally the boys, the opportunity of learning fives.

The then headmaster had promised to replace the courts, as headmasters do, calculating that time and alumni apathy would allow this commitment to be forgotten, and promptly left. He would certainly have been correct, had John — by then long retired — not, by raising hell, inspired the initiative to “bring Rugby Fives back to its spiritual home”.

His Quixotic determination to restore fives courts was grounded in his lifetime schoolmasterly experience of prodding and cajoling reluctant pupils into activities that — when they rouse themselves — they thoroughly relish. The genesis of the Court Restoration idea came to him when a guest at David Urquhart’s (his former head of house at Rugby, and head of school) enthronement as Bishop of Birmingham.

John became increasingly wrathful during the event, learning of the weaselly words about replacement courts by the headmaster who oversaw their destruction, and decided that he would see that Rugby would play fives again.

And, gloriously, against the odds, but not against his belief, Rugby Fives supporters (players, the RFA, the Jesters, ex-players, Rugby School pupils and their parents, anyone who could be buttonholed) raised the funds; Rugby School more than did its bit, by supporting the idea, making space at the Sports Centre, committed to the future maintenance, and appointed an inspirational fives master in Trevor White.

Now both girls and boys have had a decade of playing the game again at Rugby, and a coterie of ancients have enjoyed rolling back the years by playing on the JAE Evans courts. Aged 77, at the official opening, he produced his fives gloves and was keener than anyone to get on court, if only briefly. It gave him huge pleasure to see grandson Freddie representing the school there.

In 2017, despite being physically very infirm, and located three hours drive away, John decided he wanted to attend the annual Jesters dinner at the RAC Club in central London, at which David Urquhart was due to be the speaker. No obstacle prevented him, not even the deadly terrorist attack that day on Westminster Bridge, which imperilled the event, and put a number of guests off attending. The final hurdle of what was quite a logistical saga was to get him up to the dining room on the first floor — the massively imposing club staircase being well beyond what his legs and sticks could manage, John needed to use the lift. Time was running out, as the doors would be locked by security and no-one admitted after the arrival of the Jesters’ patron, the Duke of Edinburgh, for whom the lift was reserved. Thankfully, the Prince Consort was delayed by a few seconds, just long enough for John to be whisked upstairs. 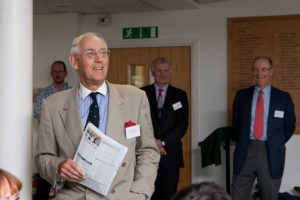