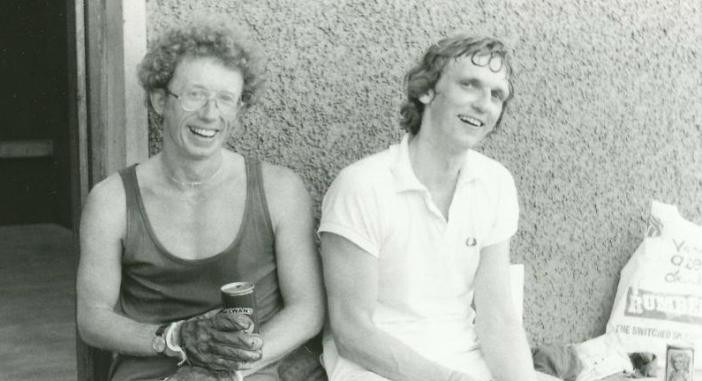 An Old Dunstonian, John was a creative left-hander who left his opponent wondering frequently where the next shot might come from or, indeed, be going to. He was as colourful a character on court as off it, and more than one young player would admit to having aspired to play the game as John did.

John (left) is shown with can in hand after a game of Veterans Singles against Dave Hebden.

A fuller appreciation will appear in the next Federation Newsletter.

A Memorial Service will be held on Saturday November 21st at 11 am in the Chapel of New Beacon School, Brittain Lane, Sevenoaks TN13 2PB
Oak Lane is a turning off the High St, close to the Royal Oak Hotel and Sevenoaks School. Brittains Lane is a turning off Oak Lane at the top of the hill. Exact directions can be found on the School’s web site.