With the help of Marlborough College, who agreed to host the event, organiser Ollie Arnold put on a superb event at the West of England Championships. And it was fellow Old Pauline Ed Kay who came away with perhaps the biggest smile on his face, after winning both the singles and doubles titles.

However, there may well be some aching limbs to accompany that winning smile, as Ed did it the hard way, with both finals going to three games. His singles win came with an 11-9 win in the final game, while it took an 11-8 win the last game to clinch the doubles title. In both matches, it was Dan Tristao who ended up with the runner-up’s medal – along with Dan Grant in the doubles.

Ed’s partner in the doubles was Will Ellison, who had created headlines of his own on the Saturday, after a quarter-final loss to David Butler. However, any fatigue or lack of practice on Will’s part is perhaps understandable, given the recent birth of his first child. And, we’re sure that the gold medal for the doubles title won’t be the last one he brings home.

Finally, special mention must go to Sam Russell, who scored a double of his own: winning both Plate competitions. Like Ed, it’s all the more remarkable as both his wins also came in three-game finals. First, he beat Theo Parker to win the singles plate, before teaming up with Tom Watkinson to clinch the doubles plate.

Organiser Ollie Arnold writes:
This year the West of England Championships attracted 21 singles and 13 doubles entries to Marlborough College, where Ed Kay won his fifth Open singles title and teamed up with Will Ellison for a hat trick of doubles titles.

The singles started at a pace, with James Tilston and Julian Aquilina battling it out over three long games. Having recovered from losing the first set 12-10, Tilston’s powerful hitting could not get him over the line in the third; Aquilina’s reward was a quarter-final versus defending champion Dan Tristao. Elsewhere, Theo Parker pushed Will Ellison in a long first game, but could not keep up the pace, losing 11-8, 11-1.

With the top eight seeds safely into the quarter-finals, the plate competition started in earnest. 13 players played 36 matches over two groups, leading to mixed reactions from those involved. Alex Rew delighted in the volume of fives, whereas Parker and Ben Kirwan complained of fatigue, suspiciously before they had played any of their games…

Back in the main draw, not all was well for the top four seeds. Dan Grant recovered from losing a tight second set to beat Ollie Arnold in three games, while next door the biggest story of the day was developing. Dave Butler and four-time singles champion Will Ellison were locked in a brutal first set, which Dave finally won 12-10. This proved crucial in the outcome of the match, and Dave was celebrating his biggest singles scalp soon after. Tristao came past Aquilina in two, and despite a surge of winners from Ben Beltrami, Ed Kay made up the semi-finalists.

Dave Butler continued where he had left off to start his semi versus Ed Kay. The first set see-sawed as each player took the initiative, but it was Ed’s greater experience at the sharp end of open tournaments that saw him take the match in two. Grant and Tristao, watching the other semi-final, clearly decided that they would not be sucked into the grind of the Marlborough courts. Drop-shots and winners followed, as well as an ambitious behind-the-back, facing-the-back-wall shot from DT. From the sublime to the ridiculous however: a second attempt not as successful as the first, though this could not prevent Tristao winning in two.

Finally the plate had reached a conclusion, with Theo Parker and Sam Russell pushing through their groups. They began in a wild atmosphere, spectators cheering every point. When Sam took a tight first game, many thought that Theo’s final was over, but an unlikely ally surfaced: cramp befell Sam early in the second. This gave Theo the opening he needed to take the match to a third, though Russell’s grit and determination nevertheless won out in the end.

Refreshed after a wonderful Saturday evening meal organised by Stuart Watson, we started Sunday morning with the singles final in front of a large crowd. Dan T took the early advantage after a first set which lasted 40 minutes, though the momentum shifted fast in the second: Ed had settled into his rhythm and was pushing Dan to all corners of the court in a display of control. When up 7-2 in the third Ed looked to have one hand on the trophy, but of course Dan came back to make it 9-9. Tense exchanges followed, but it was Dan who faltered first – Ed winning his first West of England Singles Championship.

Meanwhile, the doubles was underway; this was evident from the loud, booming voice of Tim Lewis, distracting all others on court. Unfortunately, this seemed to include his partner Stu Watson, as they lost their first-round match. Elsewhere, Sam Russell & Tom Watkinson battled to a three-set win over the promising new Bristol pair of Archie McCreath & Cameron Low. The top four seeds progressed to the semi-finals with relative ease, although James Tilston & Henry Jefferies troubled Arnold & Parker in their second game.

The doubles plate saw seven pairs take part. In the top group, McCreath & Low won out, taking the notable scalp of Aquilina & Pete Hanton along the way. Their reward was a rematch in the final against Russell & Watkinson, who won the other group. A particular highlight was Lewis & Watson’s game versus Gareth Price & Julian Hanton: amid shouts and whoops (very few of them from the spectators) Price & Hanton took the game 15-10.

The doubles semi-finals were next on court. Although recent winners in Yorkshire, Arnold & Parker found it tough to break down Kay & Ellison. The two-time defending champions won out in two lengthy sets, overcoming a second-set surge from the Bristol pair. The other semi-final was more straightforward: Tristao & Grant comfortable winning in two. Next was the doubles plate final. This time McCreath & Low took the first and were looking on the verge of a big win in the second before Tom Watkinson stole the show with some attacking play, dominating from the front of the court. This continued in the third game, Russell taking home both plate titles this year.

The main draw finalists had six West of England titles between them, and the 2018 title seemed to be going the way of the Cyriax Cup holders when Dan T & Dan G took the first 12-10. However, as the game wore on, Will Ellison showed why he had only recently been overtaken in the doubles rankings, with consistent hard-hitting throughout proving too much for the Dans. After Will & Ed had won one gigantic rally, there was no looking back and they took the third 11-8; this was Will’s 71st and Ed’s 12th open title.

Thanks must go to Marlborough College for the use of their courts at short notice, and to all of the competitors who made this such a fantastic weekend of fives! Once again, these results set things up nicely for the National Singles in December, where all the top players will be looking to end Dan Tristao’s two-year reign. I look forward to welcoming you all back next year! 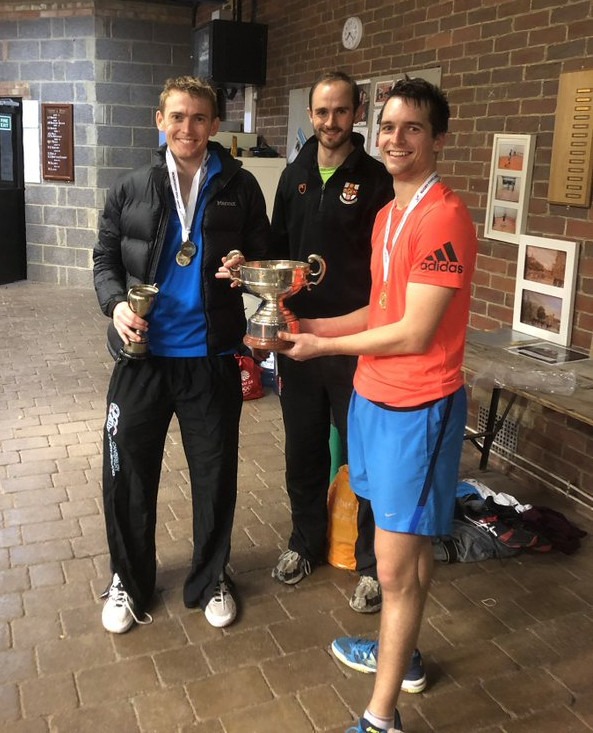 Open Doubles winners Ed and Will 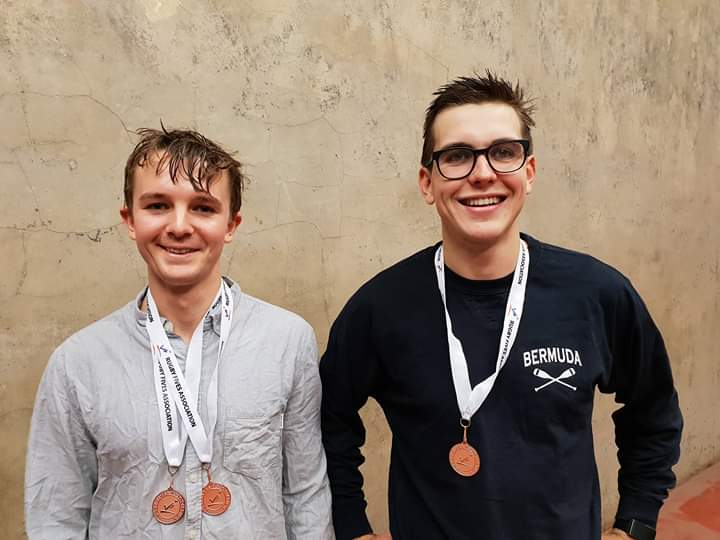