Bob Dolby reports: Mrs Malt would have been delighted. 50 players entered the competition for the cup she presented to the Alleyn Old Boys Club in 1937 in memory of her recently departed husband, multiple National Champion Philip Malt. The magnificent trophy is now repurposed for an event designed primarily to promote fives for female beginners.

Of the 50 players (49 of them made the group photo!) over half fell into that category. These young ladies came from Rugby School, Bedford Modern School, Alleyn’s School, the Stamford Schools and Cambridge University, and they were supported by, and paired with, a variety of young male players, coaches, parents and a small number of experienced players.

The first 3 hours were filled with pool matches galore, the results of which enabled the organiser to select 8 pairs to contest the Cup, while the remaining 16 pairs played for the Lady’s Bowl. While these two competitions got going play continued in the Ball-in-the-Box-Challenge, which eventually came down to a high-scoring tie between Hugo & Freya and Joseph & Malachi. The ensuing Sudden Death play-off saw the latter pair win the Lady’s Petit Pot.

The knock-out matches in the Lady’s Bowl showed how much progress some of the inexperienced youngsters were making. By the time we reached the final it was clear that the winners, Zara & Chase from Stamford, were a well balanced and purposeful pairing, while Gracie and Elisabeth from Rugby had made noticeable improvement in their doubles play.

In the main competition for the Lady’s Cup the ever-improving Cameron & Maddie from Stamford  and the increasingly reliable Surianne & Malachi from Bedford Modern were the two pairs that lost their initial match, entered the Plate and eventually contested the final, with the latter pair winning, largely due to their greater experience. The semi-finals saw a brave effort by Rugby’s brother and sister pairing, Mollie and Max, to counter the power of the favorites from Durham, while Martha & Bethan from Alleyn’s gave another sibling pair, Rugbeians Freya & Claudia, a hard match.

The final saw Camille & Oscar, who had come down from Durham, take on Freya, a previous winner of this trophy, and her young sister Claudia. Claudia must go down as the Most Improved Player since Last Year, while Freya defied lack of recent practice to more than hold her own against the hard-serving Oscar, but the outstanding young lady on display during the day was Camille, two-handed, fleet of foot and consistently aiming to hit walls.

My thanks go to Holly Nugent and Ashwin Ahuja at Cambridge for their efforts in recruiting 7 new Cambridge ladies in just one week; to coaches Julie McIntyre, Trevor White, Robert Kay and Alex Smith for their efforts in bringing the bulk of the competitors on the first day of their half-term; and to a host of family and friends who came to support. My thanks, too, to our young photographer Rhys Burlton, whose photos you can enjoy below. 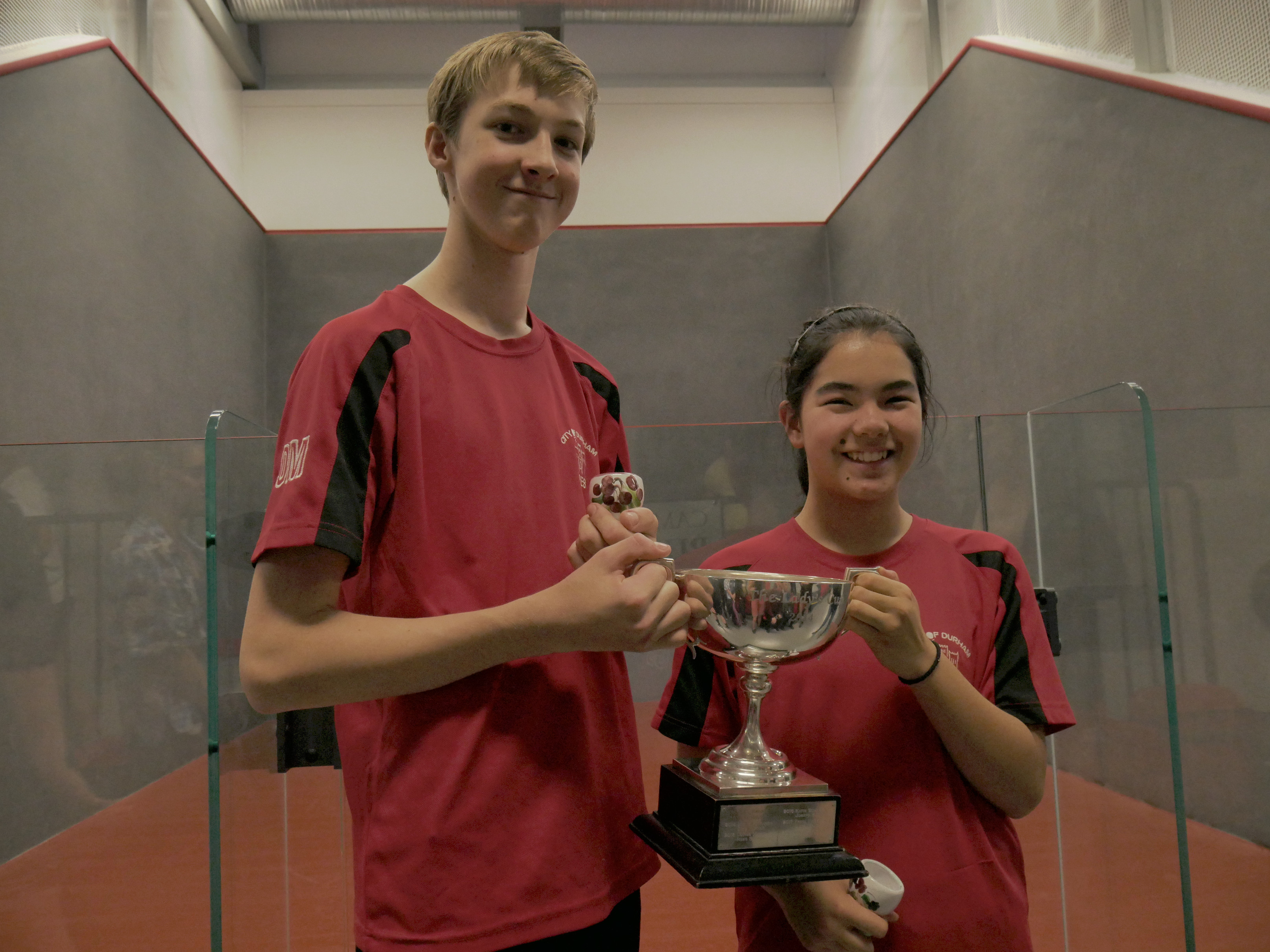 Mrs Malt’s Cup goes to the City of Durham 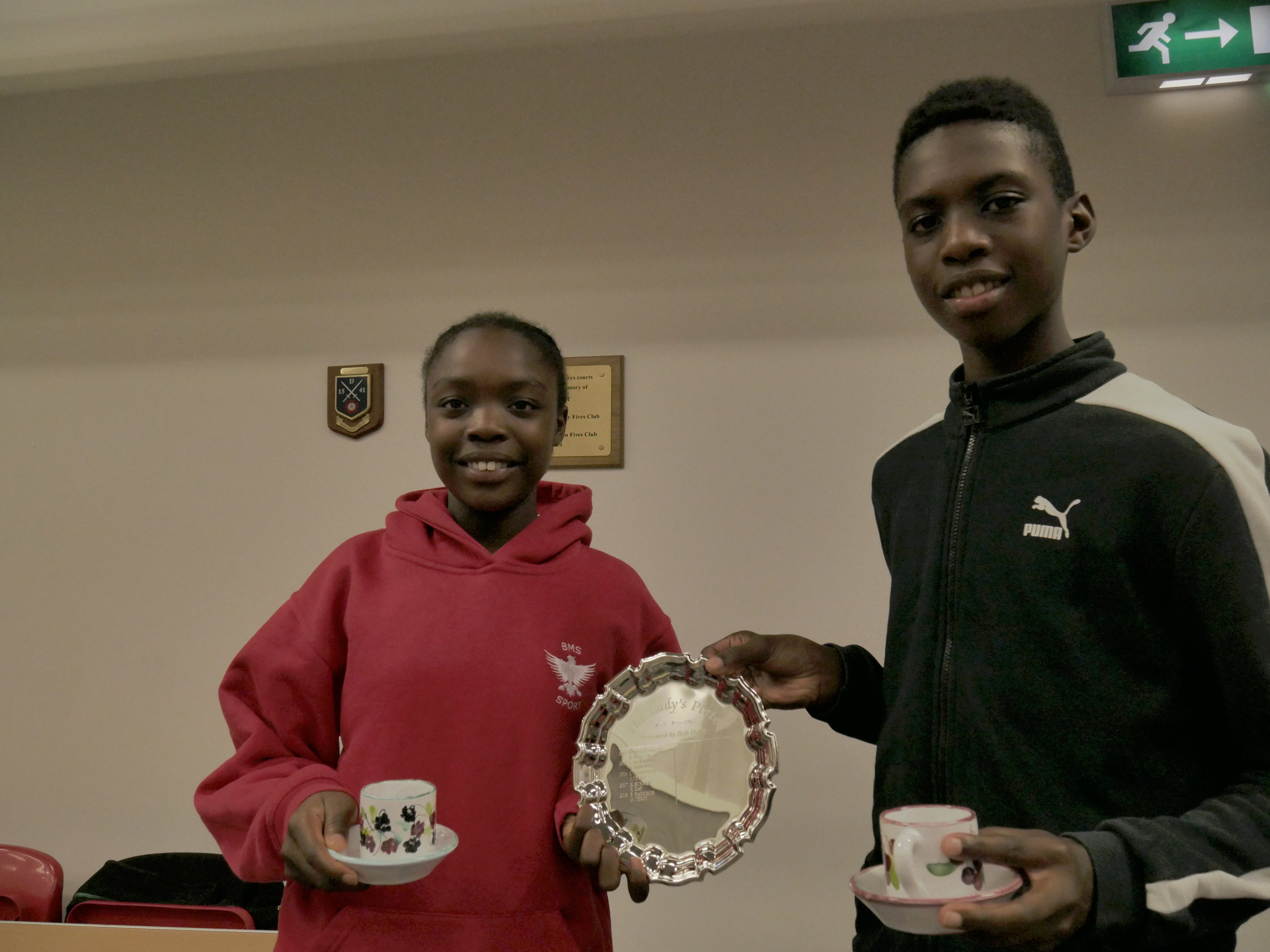 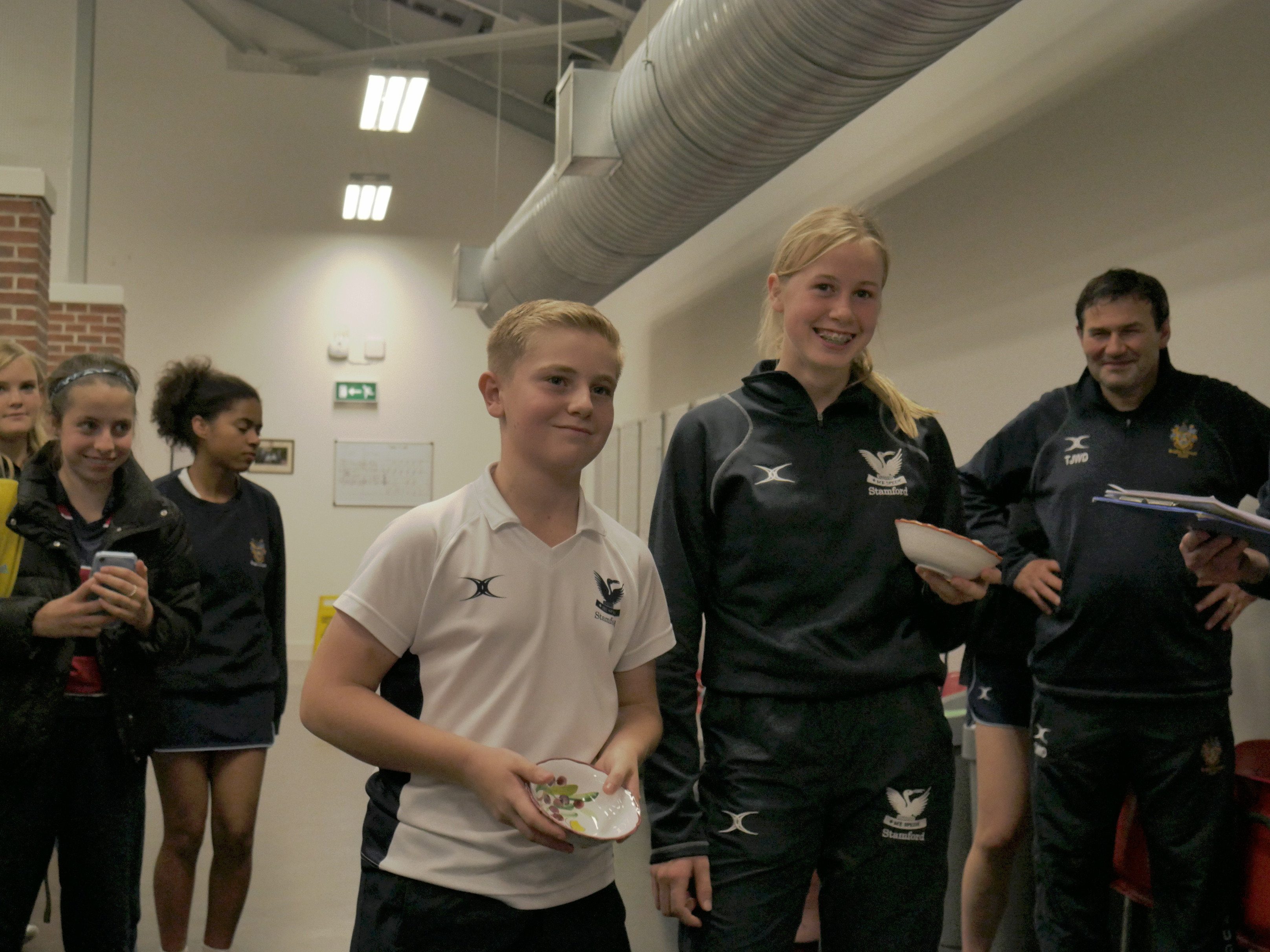 The Lady’s Bowl goes to the Stamford Schools … 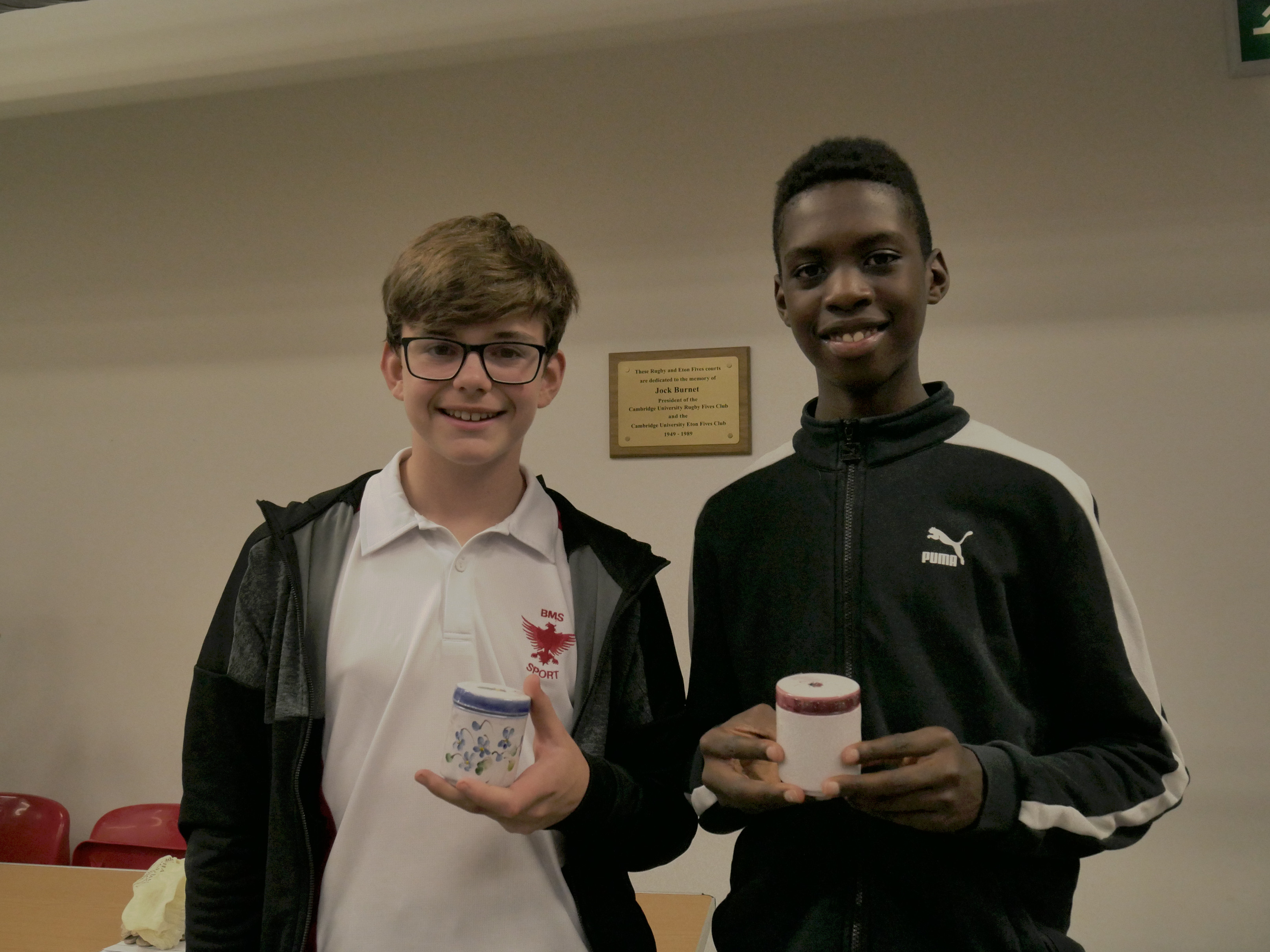 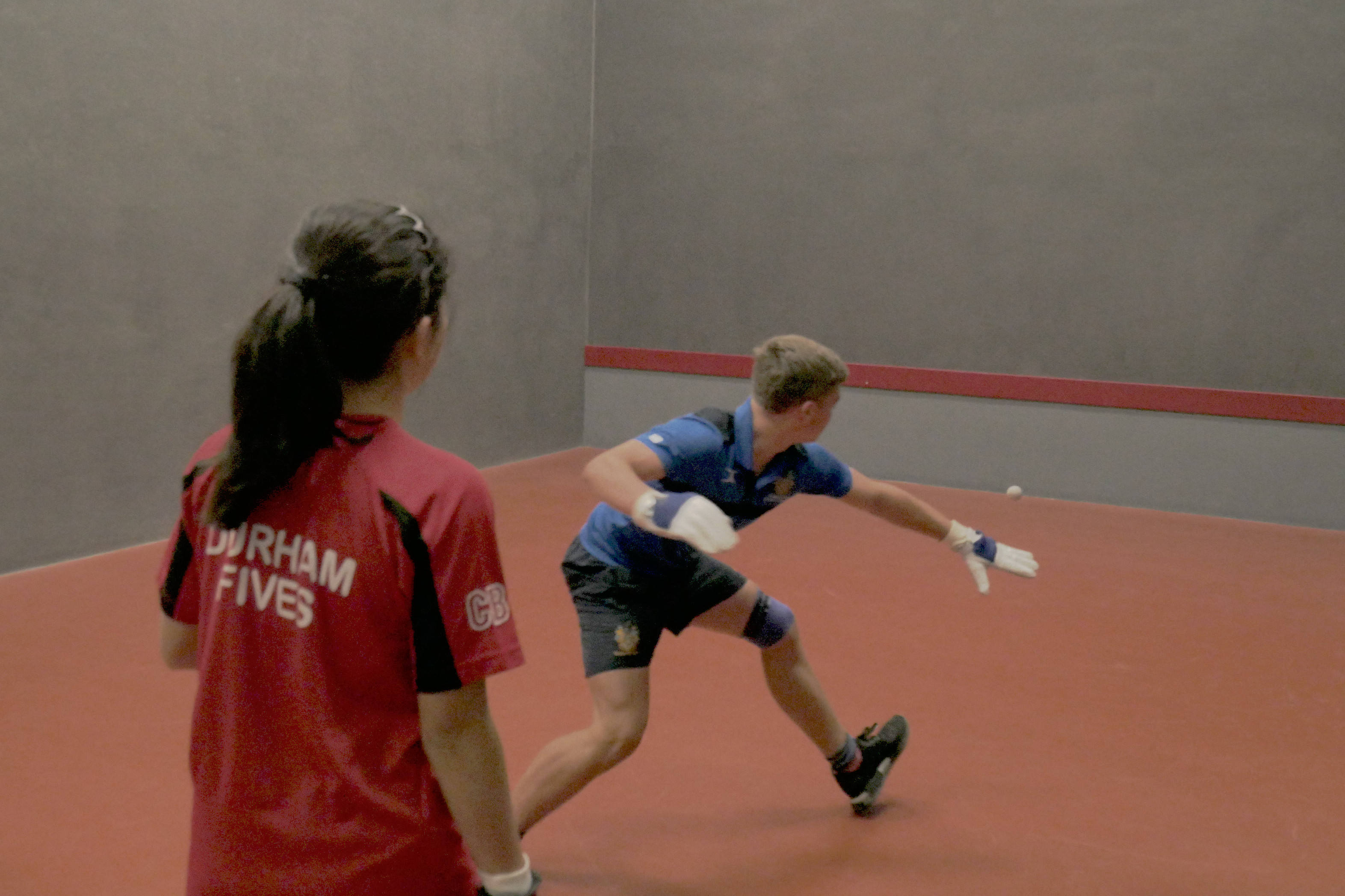 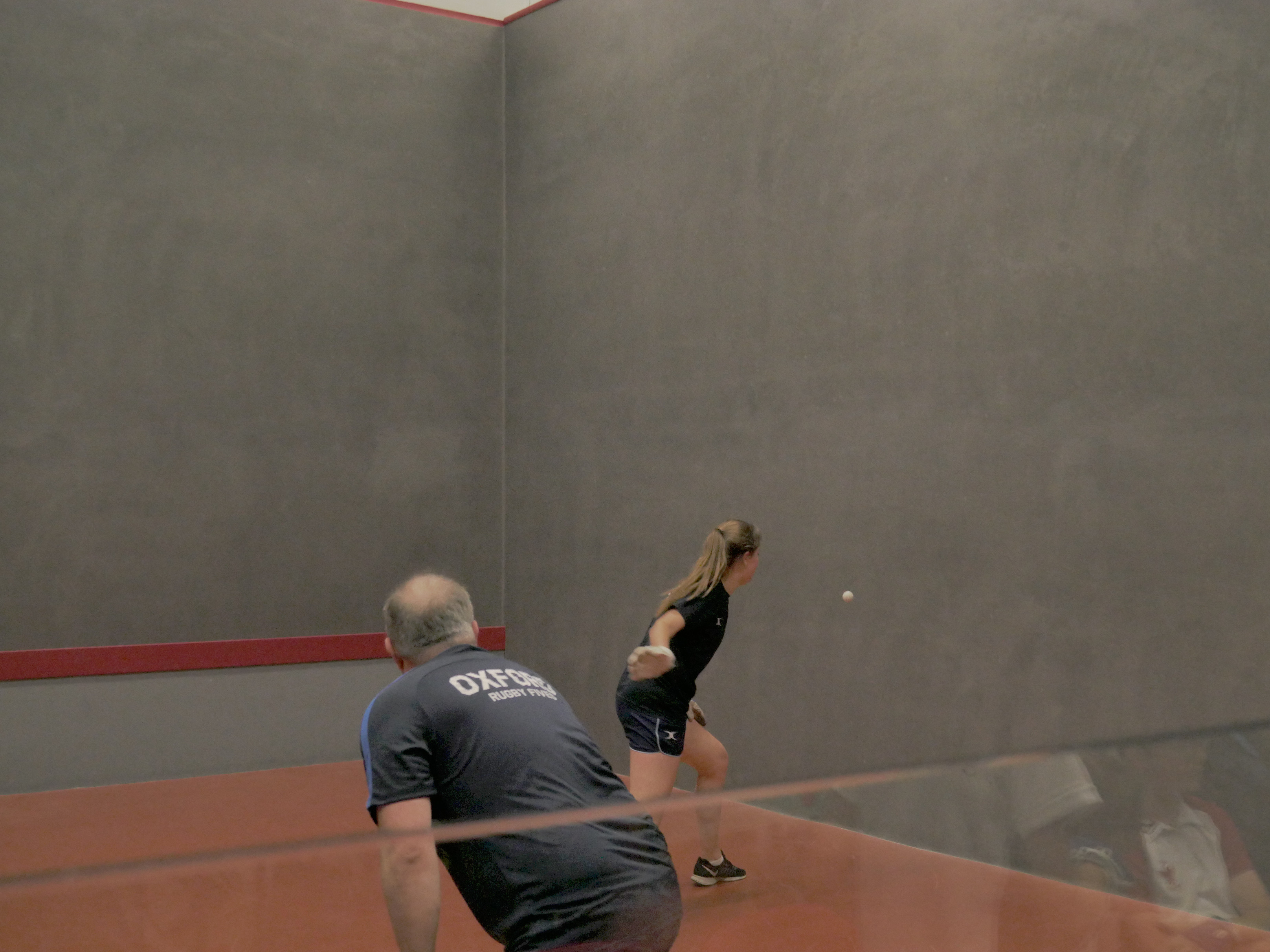 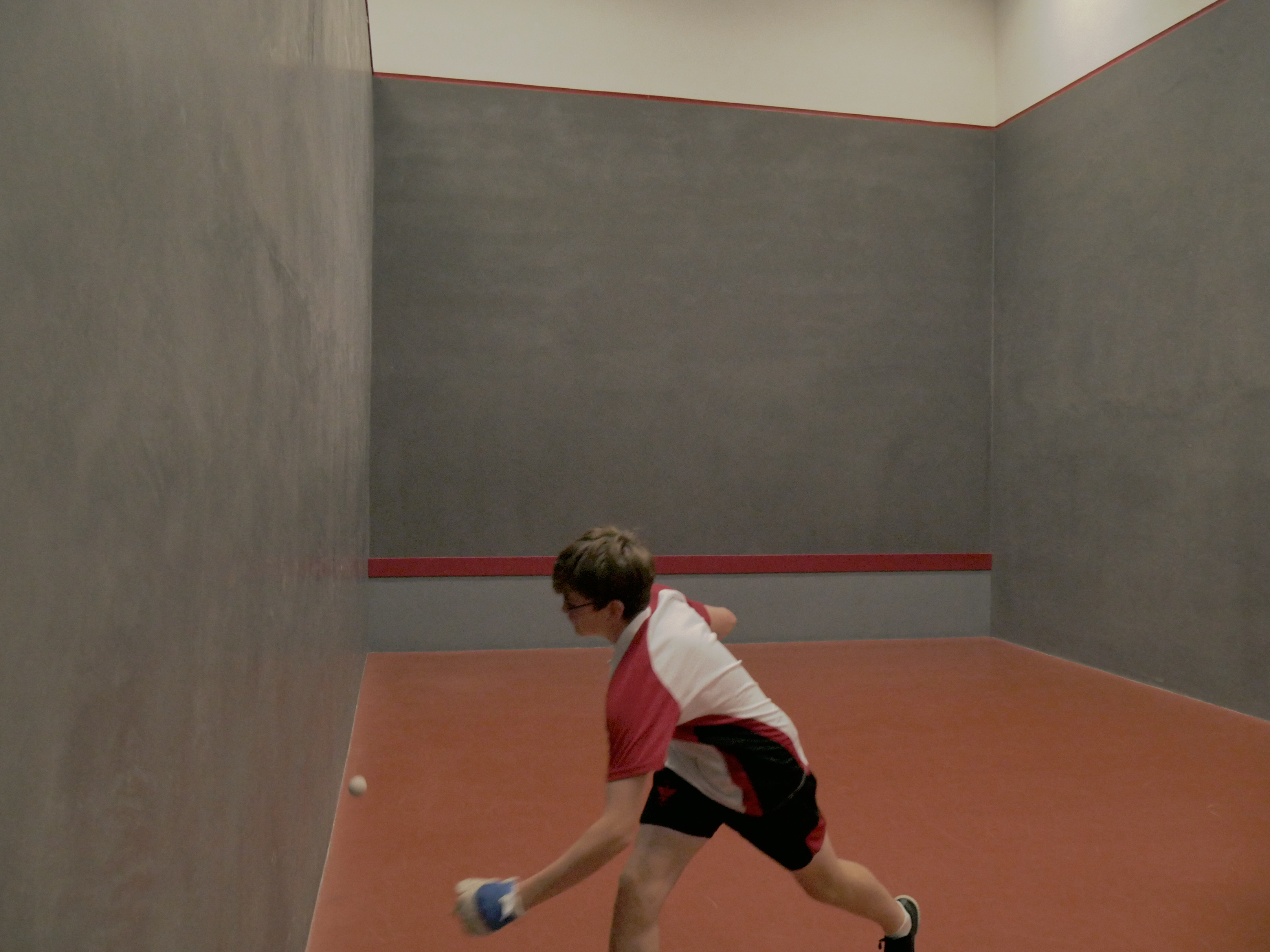 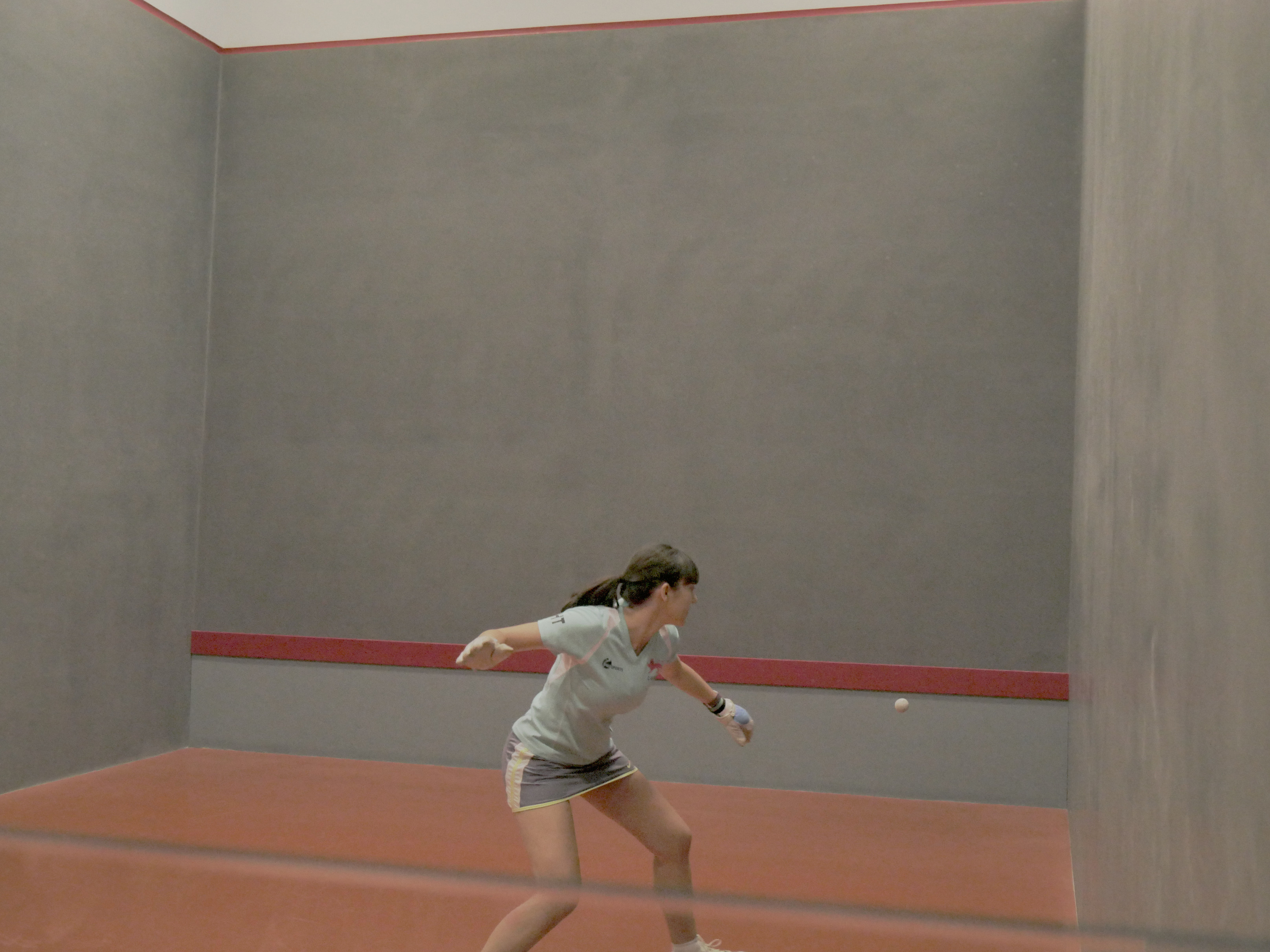 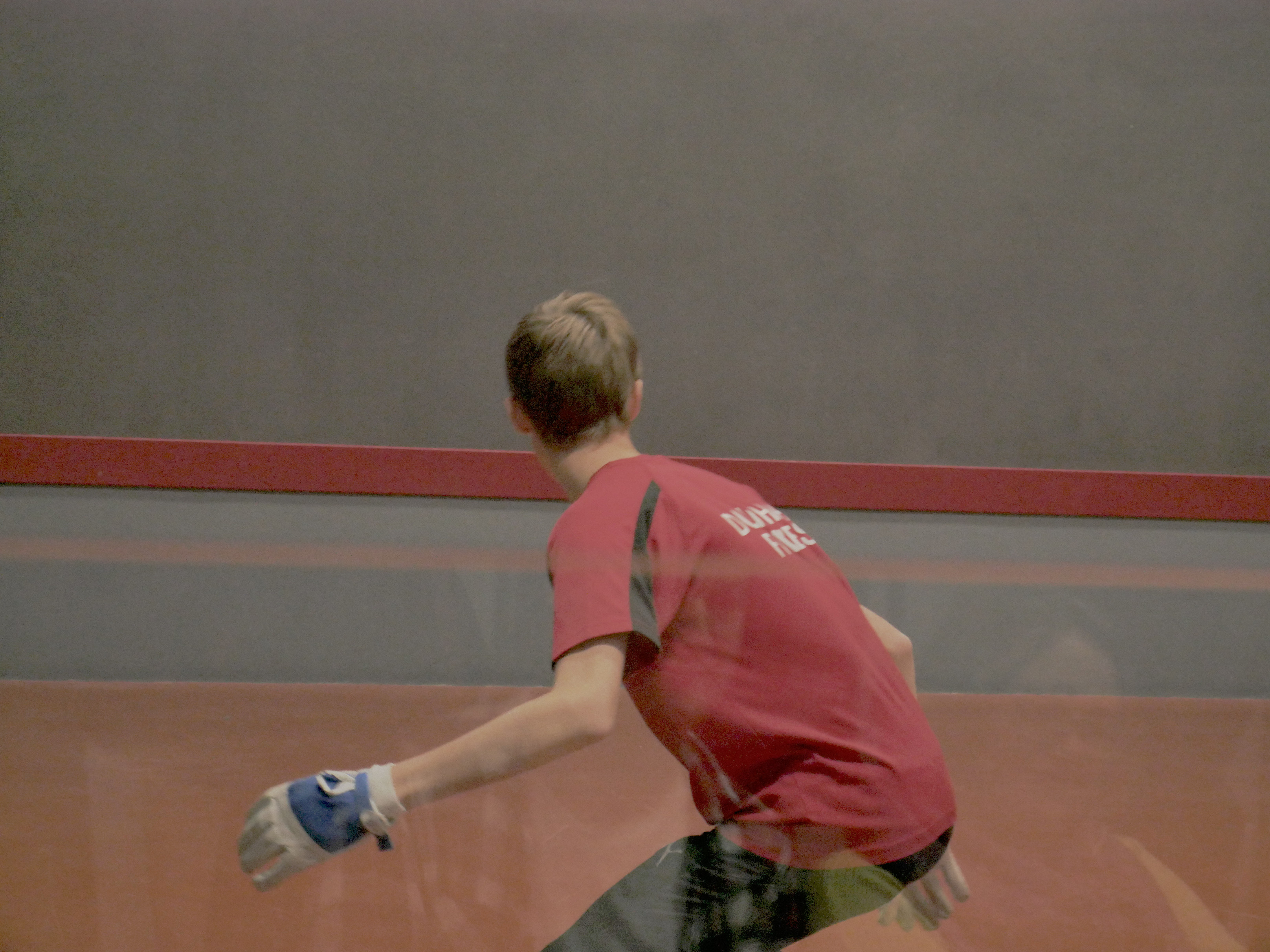 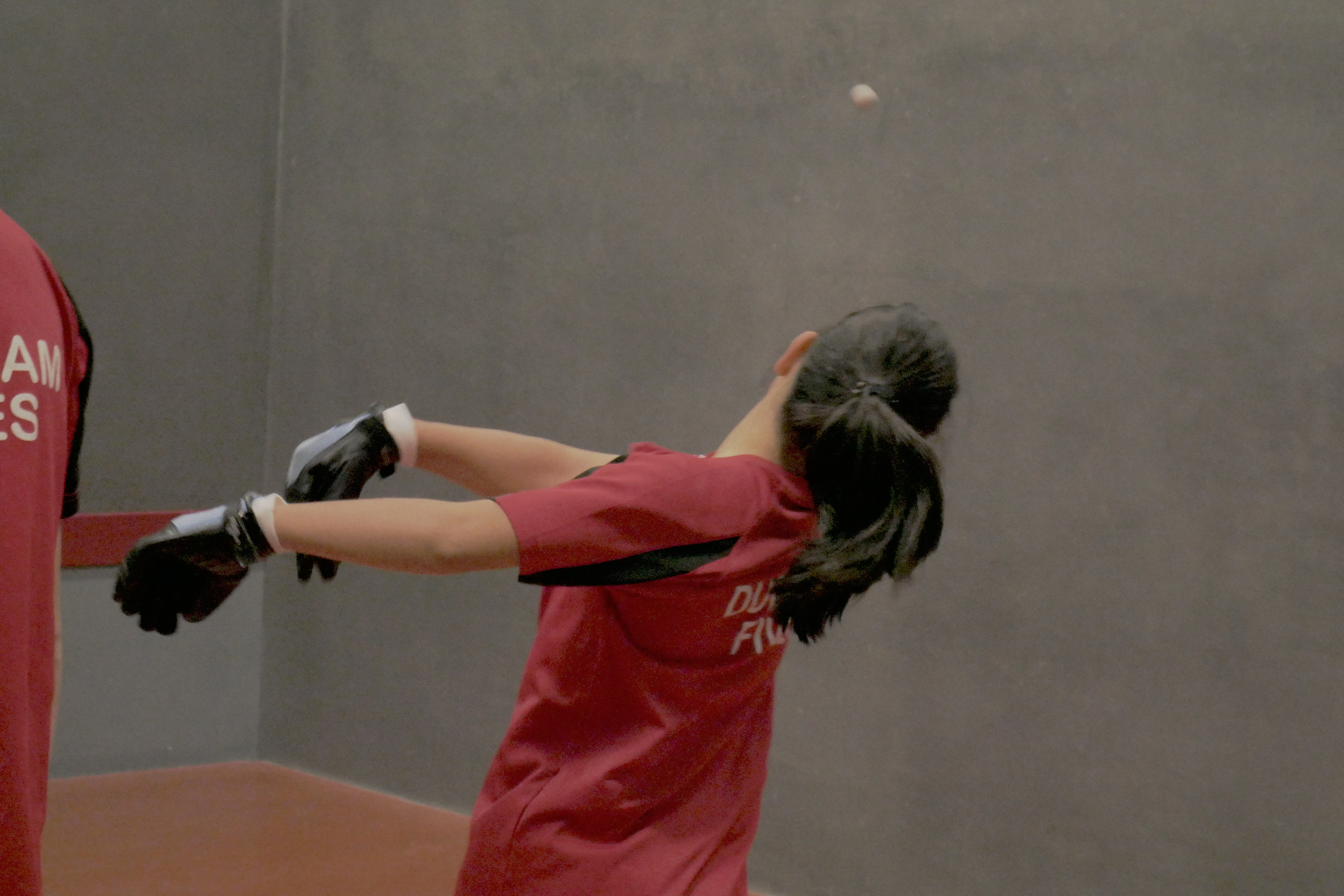