The newly refurbished court at St Andrew’s Prep School in Eastbourne has been christened by four prominent players with a strong local connection. Old Androvians Andy Pringle and Simon Beal were joined for an afternoon of mixed doubles by reigning national ladies champions Kathleen Briedenhann and Tessa Mills during an Open Day at the school. 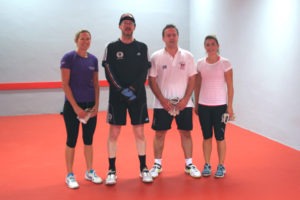 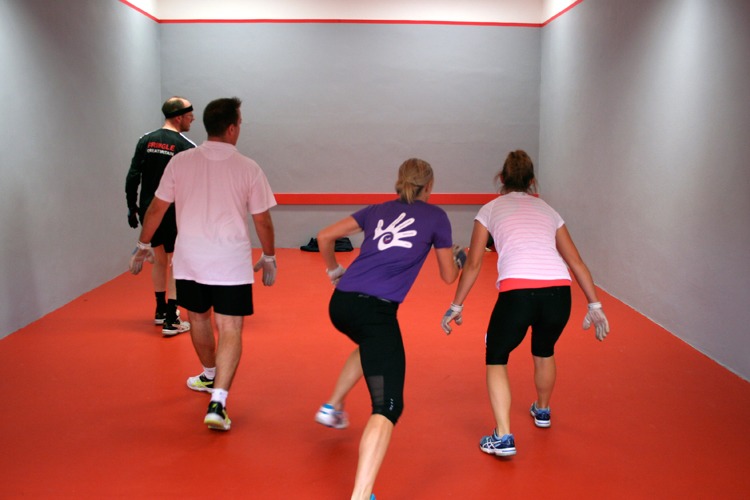 For the record, Andy and Tessa won two games to one, but more importantly the match drew crowds of interested current and former staff, as well as current and former pupils, all afternoon. Many expressed an interest in playing – and, in some cases, starting to play again – our great game; and, with prospect of some coaching help from Eastbourne College staff, the RFA hopes that the game is set for a successful re-introduction to the school and a long-term future.

As a welcome by-product, it should also help to ensure a good future for Eastbourne College Fives, as many pupils from St Andrew’s go on to the College.

The court itself could hardly be in a better position to ensure the game is seen by plenty of staff and pupils. It’s right between one of the main classroom blocks and the school playing fields, next to one of the school car parks and in a block of buildings that also contains the School shop and medical centre. 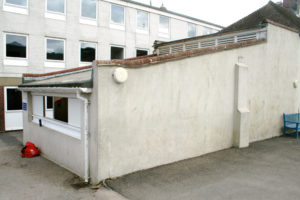 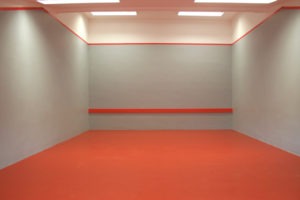 The court was refurbished by the school with some financial help from the RFA Charitable Trust and following advice from the RFA’s technical expert, Stuart Kirby; and, happily, the four players reported that the court played extremely well, with a clean bounce and excellent lighting. Naturally, being a Fives court of more than 100 years old, it has a few idiosyncrasies: the court is a little longer than average, with a low front wall and a couple of odd bits and pieces intruding into the playing area.

Perhaps most worryingly, these ‘bits and pieces’ include a fire alarm in the back left corner, but given that the four players hit it only once in three games – and Andy claimed to be aiming for it! – it suggests it won’t be too much of a hazard. This is especially the case when you consider that the children who will play on the courts will be no more than 13 years old, and the ‘hazards’ (which also include a roof support bolt and some wood below the viewing window) are all at the back of the court.

Perhaps surprisingly, this was the first time that any of the four players had played on the court. Although both Andy and Simon were pupils at the school, the court had already morphed into a storage room long before they arrived to study.

We look forward to bringing you further news of Fives success at the school, and hope that this will start with some Androvians at the Under 13s championships later in the season.