Organiser Louise Mathias writes:
This year, the Ladies’ Nationals saw a new format and venue, held over two days at the Manchester Y Club. A strong turnout of 26 players made it for the event, one of the highest entries to date! This included the top seven from the Women’s Rankings, a large student contingent, and many up-and-coming schoolgirls; the standard of fives was undoubtedly the best this tournament has seen.

The singles started with some close early-round games. Julie McIntyre took a hard-fought win over Maisie Harte 11-9, while on the adjacent court Camille Beattie (only 12 years old!) proved a force to be reckoned with, pushing Maddie Kent with some strong hitting and long rallies to steal the game 11-9. Zara Elliot cruised through the first round to play Tessa Mills in the second, where her powerful right hand and length of shot caused her opponent problems. However, experience paid off and the 2017 champion came back quickly in the second game to win 12-10, 11-4 overall.

In the meantime, while reigning champion Kathleen Briedenhann disappeared for a pre-match work-out at the gym, Shinan Zhang and Dominique Redmond had a long three-game battle: Shinan came through in the end, winning 11-2, 8-11, 12-10. President’s Cup winner Martha Nugent powered through in a game against Phoebe Thornhill to also secure a place in the quarter-finals. Having returned from the treadmill, last year’s champion began her defence against Sophie Lundie. Despite good play from Sophie, Kathleen remained on top, winning 11-1,11-0.

Action from the Plate then took over, with 15 players involved. This led to some very evenly matched games, but it was Anna, Dominique, Zara and Phoebe who came through to reach the semis. Still as energetic as at the start, Durham Ladies’ Champion Zara beat Phoebe 12-10, 11-1, and Dominique proved too tough for Anna in an 11-0, 11-2 win.

Back in the main draw, Ibby Lee took on Shinan Zhang in the quarter-finals. The first game went to Shinan, and although Ibby came back with fighting spirit, she couldn’t quite push it to a third, with a final result of 11-4, 12-11. More excitement soon followed as Martha took on Tessa in a match that had everyone on the edge of their seats. The first game see-sawed up to 10-10, and it was Tessa who won the crucial final points. Maintaining the intensity, she pulled away in the second game to win 12-10, 11-4. With Kathleen and Louise also winning their games, the top four seeds were safely through to the semi-finals.

Shinan and Kathleen started the semis off, both players showing great movement around the court. In the end, despite Shinan’s excellent retrieving, Kathleen’s strong cross-court right-handed shots allowed her to gain a 11-8, 11-7 win. Louise then played Tessa in a game of long rallies, but with Tessa’s energy reserves low from two tough early games, Louise maintained her lead to win 11-8, 11-7.

With play finished for the day, we all convened for a wonderful dinner organised by Julie McIntyre at Tampopo (thanks must also go to Dave Fox); the pouring rain was no dampener to our spirits! Sunday morning saw two champions of the game take to the court, although Rafa and Novak cannot have known that their Rod Laver Arena clash would be so overshadowed by the battle on Fred Beswick Court! With a crowd surrounding and live viewers tuned in on social media, it was only right that the clash between Kathleen and Louise should be a three-game epic — and you can watch a video of the match below the results on this page.

Putting pressure down the left and taking advantage of a few service errors from Kathleen, Louise sped away to take the first game 15-8. Determined to come back harder, Kathleen showed all the qualities of a four-time champion and upped the pace, delivering some excellent down-the-line shots to make it one game all. The third set decider only proved more agonising, with long rallies and great retrieving, but at 7-7 Louise managed to pull away and gain a crucial lead. This was far from the end of it, though, as Kathleen continued to dig deep and refused to give up, saving three match points before Louise finally emerged as champion for the first time.

Meanwhile, the plate final between Zara and Dominique also went to three games, with a great show of fitness and determination from both. With experience on her side, Dominique pulled through to win 11-1, 7-11, 11-9.

The pool matches for the doubles then got going, with 12 pairs competing. The highlight was the match between Martha & Dominique and defending champs Alexandra & Maddy: last year’s winners won a tight 11-8 game. Martha & Dominique’s strength later took them to Plate victory. It was Shinan & Louise who eventually overcame Alexandra & Maddy in a yet another three-gamer to make it to the final. Here, they would meet the force of Kathleen & Tessa, who had sailed through their semi against Ibby & Anna. Unfortunately, Ibby had injured her right arm, which turned the game into a rare battle between two righties and two lefties.

The doubles final provided yet more compelling viewing. Louise & Shinan dominated the first game, but Kathleen & Tessa took over in the second, driving the ball hard to the back corners. Tactics reassessed and helped out by some effective (but not always purposeful…!) winners, it was Louise & Shinan who gained the doubles title for the first time, by a 15-8, 6-15, 15-11 score line. And so the day ended with two new, first-time National winners and high spirits from all players and spectators!

The weekend proved a fantastic success, with a very high standard of play and great enthusiasm from everyone involved. Thanks to the Y Club and Dave Fox for the use of courts, the glass back lending perfectly to the expert live-streaming carried out by Gareth Price and James Smith, allowing the excitement and high quality of Ladies’ Fives to be spread far and wide. Further thanks to Gareth must be made for sourcing tournament shirts for everyone, as well as Julie McIntyre, who organised all the food and helped the day run as smoothly as it did.

Ladies’ Fives is undoubtedly growing bigger and better every year, and I very much look forward to seeing you all at future tournaments! Don’t miss out on the Ladies’ Winchester Nationals at Winchester College (organised by Maddy Raynor) on 3rd March -– entry opening soon! 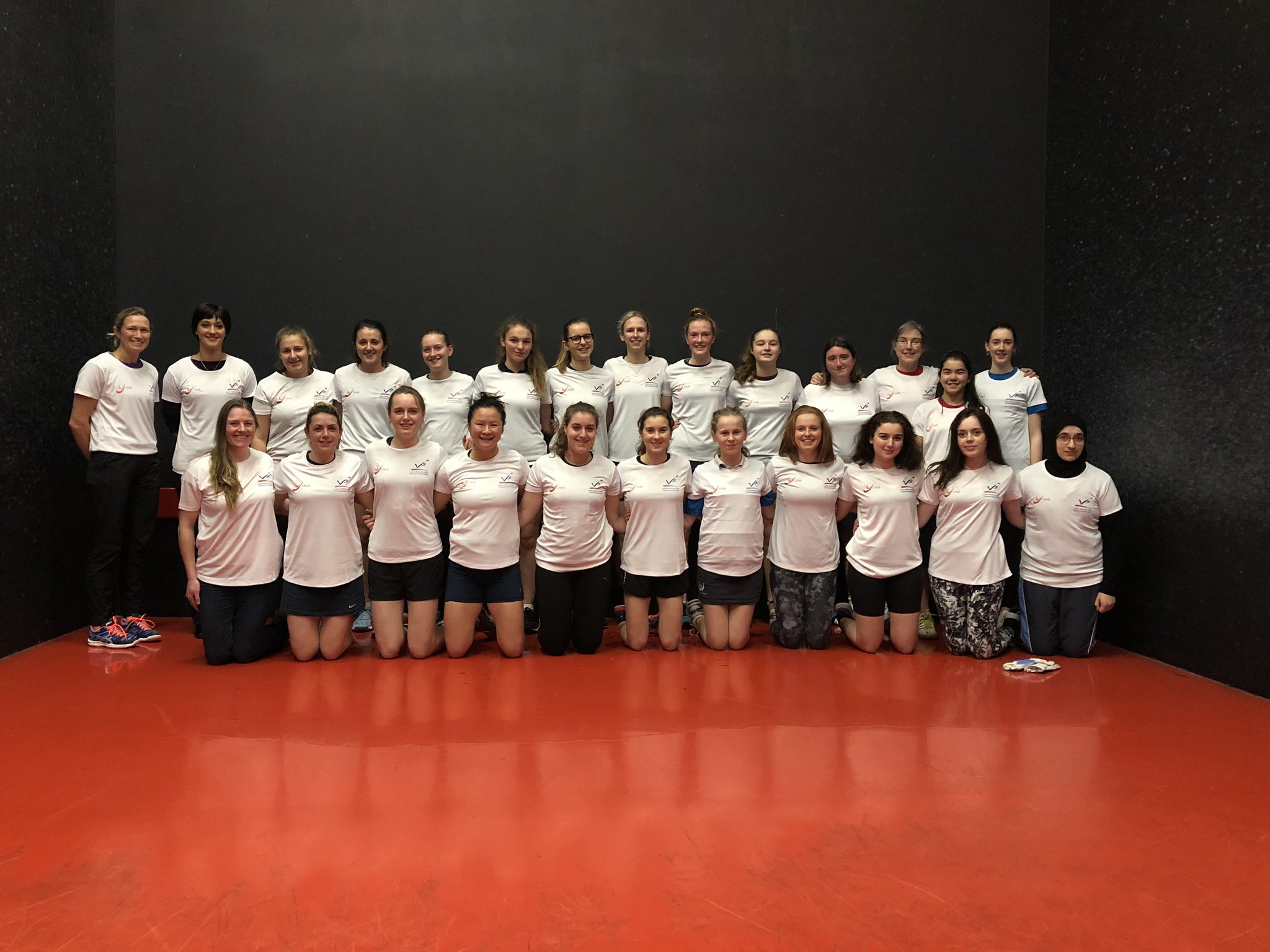 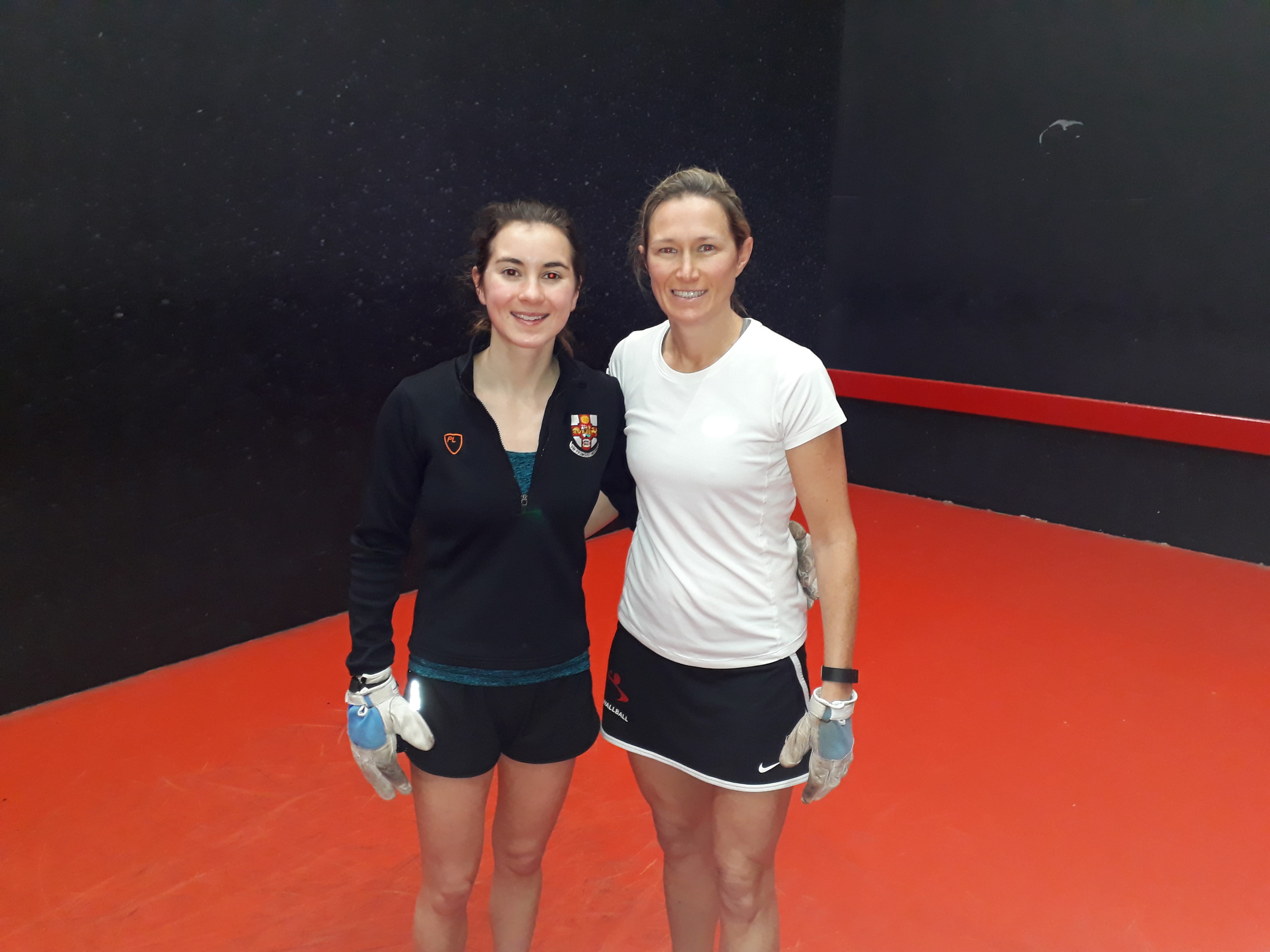 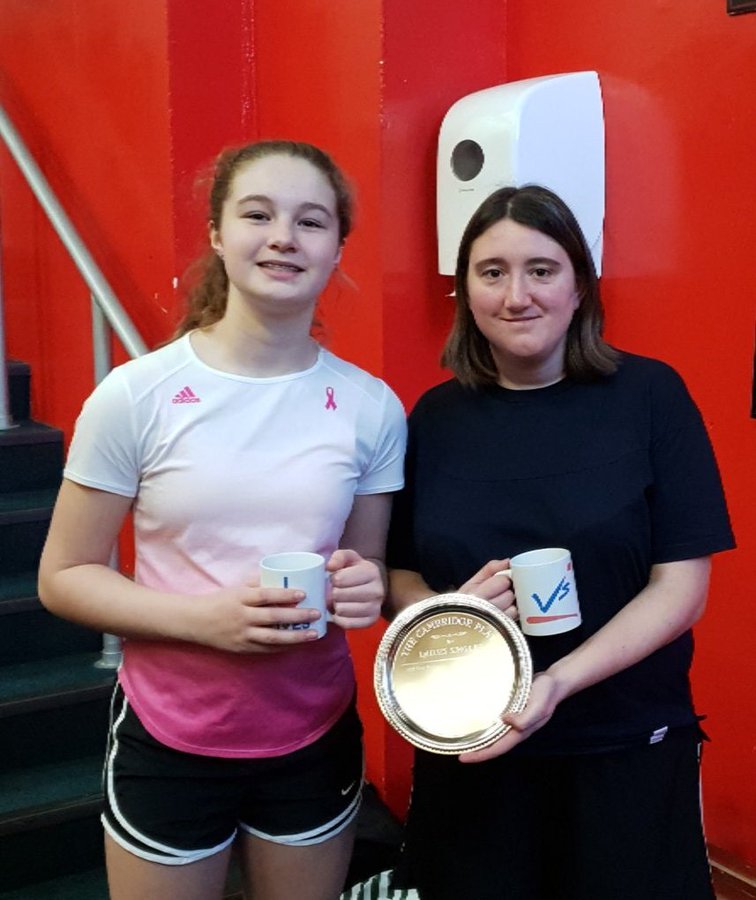 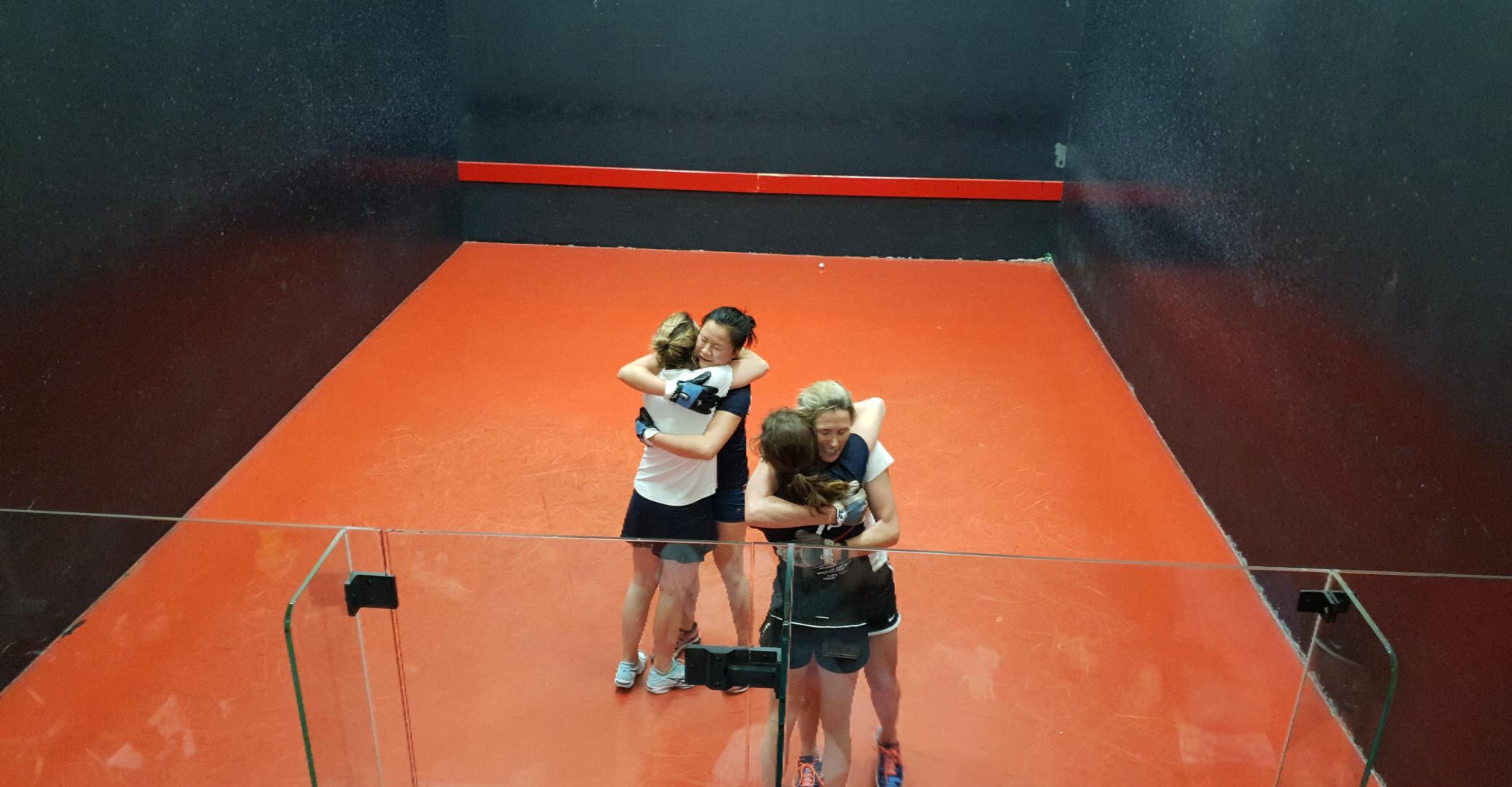 The Spirit of Fives!