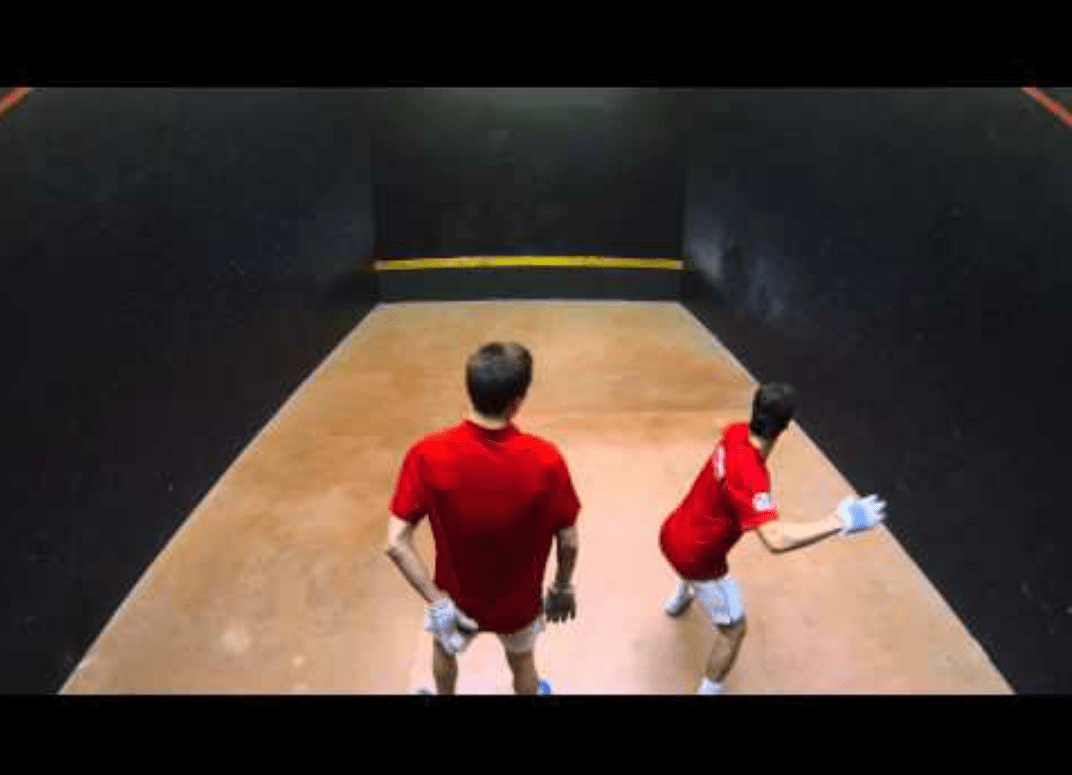 Daniel Grant comes out all guns blazing, capitalising on a slightly nervous start from Will. A flurry of volleys and nicks lead him to a 13-2 lead. Will then found a bit of form and slowly clawed back, but Grant closed it out 15-10.

The second game started off very close with neither player building any real lead. Both players neck and neck until 8-8. The crowd had a feeling the next points could be decisive and it was Will who registered a lead, then closing out the game 15-10.

Will picked up the third game where he left off, noticeably keeping the rallies long as he saw Dan beginning to tire and cramp. But then Big Will himself also succumbed to cramp, but by this stage the lead was already insurmountable and Will closed it out, sealing his first national singles title (out of 5 attempts) much to the delight of the crowd, his fiancee and his father.

Congratulations to both players but in particular Will – the first Old Wykhemist to ever hold the accolade.

It was a plate of great quality this year. 8 fantastic players went at it hammer and tongs.

In the quarter finals it was Goodwin, Bate, Parker and Arnold who prevailed over Price, George, Russell and Aquilina respectively.

The semis featured one easy-ish game for Marcus Plate and a real epic for Bristol pair Arnold and Parker. It went right down to the wire but it was Theo who won 15-13.

The final was another three game classic and plate fans will be pleased to hear we filmed it all. Marcus took the first game and looked the man of the hour, but Theo played out of his skin, took the second and then, with his powerful right, the third as well. No doubt this will be a huge rankings boost for him. Sadly the national plate still eludes the plate king.

In the far closer semi-final the bottom half of the draw saw Dan T face Dan G.:  No.2 vs No.3. Grant had decided to clunk it into 5th this time, but it wasn’t enough at the beginning of game 1 as DT took a heavily early lead with some great nicks. But Grant rallied and dug deep and pulled it back to 13-13. Then, at a crucial moment, Tristao pulled off one of the most outrageous drop shots we’ve ever seen to get back on the receiving end where he managed to close out to 13.
The second game was a strange affair. Grant came out strong and managed to exploit a bruise that DT had been nursing all season. Half-way through the game the pain became too much and Tristao began to serve left-handed. He lobbed everything up with his right hand and this tactic almost worked. He claws it back from 9-0 down to 10-9 up. But then Grant stopped trying to hit it right, played his normal game and closed out.
Game 3 was also odd. Dan T had now padded up but still didn’t have the feel. Both players were visibly tired and a lethargic performance of grinding the other down saw Grant nudge to victory with slightly more energy and two good hands. He makes his first national final where he’ll play Ellison tomorrow morning. [Only the second OMT to do so, since Paul Smith in 1956. Ed]

Ellison continues his world no.1 dominant form. There’s not much to say really, Will smashed him. John screamed twice though and there were definitely a few decent back and forths. Sadly the Mancunian crowd didn’t have an effect, we’l, maybe 3 points of effect.
Meanwhile in the audience legend and past champion Phil Bishop makes a welcome appearance after excruciating back pain absence.
Filming for the promos continues. We have crane shots and track shots – we think it’s gonna look half decent!

Once again Butler proves his worth by retrieving impressively. His tasty little drop shot also works a treat. But as a below par Grant goes down again, he clunks it into 4th, makes a comeback and takes first game.
The second is a similar state of affairs and as the last ball struck Grant bee-lines his towel and Butler collapses into recovery mode. Grant now plays Tristao I’m the semi. Hopefully it’ll be a better match than when they played the semi last year.

Into the lower half of the draw, and defending champion Dan Tristao has Richie Murby (winner of the Scottish qualifier) as his next opponent. Straight away, there are cracking rallies with superb retrieving from all over the court. Scotland’s finest initially manages to stick with Dan, but only for the first half of the game, as the reigning champ gradually increases the pressure to force more errors. The second game follows a similar pattern with both players coming up with fantastic shots at the end of huge rallies, but Dan has enough in the tank to come through to 6 & 7.

Over on court 2, John Minta and Matt Cavanagh, seeded 5 and 4 respectively, had another epic battle. The ‘veterans’ of the tournament have played each other at this stage for the last few years, and, true to form, there was little to choose between them as John levelled the match at one game all. The home court advantage, and local support were clearly proving an inspiration. He came out firing in the third and Matt couldn’t stay with him; last year’s result was reversed and John goes on to face Will in the semis.

In the first quarter final, number one seed Will Ellison took on multiple former champion Hamish. An increasingly partisan crowd couldn’t prevent Will from dominating from the start and putting Hamish and his injured knee under immense pressure. Onlookers remarked that he was looking “ominously good”, but a long way to go yet. Will duly closed out the match 15-1, 15-2 to storm into the semi-finals where he meets the winner of Minta and Cavanagh…

Price reports, “The first game was just horrible. Murby must have been thinking, “who is this jerk?””
The second was a real crowd pleaser, from a long way down Gareth rallied hard, made Scot tired and came through nicely. The third was close for 5 minutes, then Gareth’s legs packed in as only they can do. Murby progresses to the quarter where he’ll play Tristao. He’ll need to play stronger off his left hand though and maybe tone down the beach wear.

What a game! Theo on fire in game 1 and powers the stalwart Buchanan off the court. Parker has some remarkable shots but is famously fragile when it comes to a winning mentality. He capitulates in the second.

The third game has the whole crowd on edge and cheering in excitement. Parker gets the first 2 match points, but Hamish saves them – once with width and once on an agonising Parker blunder. Hamish takes no prisoners on his match point and Parker dumps one under the bar. Cracking game, long and exciting!

It’s a case of age over beauty here, which is immediately debatable. Oli confesses he never really got into the game and his right hand was back to it’s old self. If you don’t know Oli, that means his right hand is rubbish.
Matt brought it out of him though, clever play and good retrieval off the power left saw Cav progress to the quarters.

Well, this one looked like an upset! Grant certainly not up to recent form was making errors and being outplayed by George, who had really upped his game. Great retrieval from Adam resulted in several costly unforced errors for Grant. But at 14-9 down Grant dug his heals in, clunked it into third and closed out the next 7 points.
The second game was more in line with the seeding and Grant closed it out easily enough, surely George is a great contender for the plate now.

A good win tor Tristao. Good win. GOOD WIN. Geddit?! The Derby Moor lefty played his game but sadly was against Dan, who forced too many errors from our National Final debutant. Anthony has great power on his left hand but couldn’t quite find the right width today – the result – too many set-ups for Danny T.
Anthony joins Sam and Jules in the plate.

Julian made the fatal error of having heavy eggs on toast this morning and it showed. He got off to a slow start compared to John, who had already been in the gym for half hour.
There were good rallies, especially in the first game, but John was too strong. Good to see the tattooed beast back on formidable form

Sam was steady out the blocks and played okay, but lessons learnt against Ellison who dominated the court with aggression and consistency. Ellison had prepared for this finals weekend impressively. He had been playing lots, running with a PT and wounding as many players possible along way. Prospects look good.
Russell can take pride by both not being injured Will and making his first finals. The first of many we hope. We’ll see him again in the plate later on.

The national singles finals starts at 9:15am. Updates to come. Follow match reports here and immediate insight on Twitter/Facebook (@rugbyfives).

In the meantime, here’s the first round line ups:

First round tasty line up