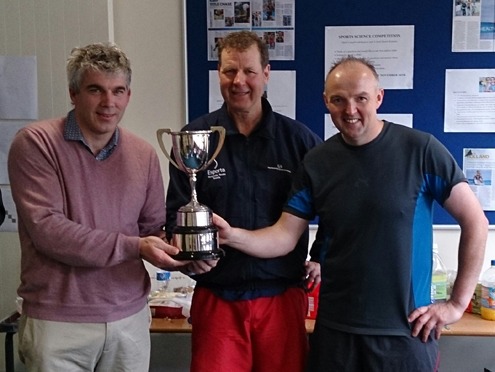 The Veterans’ tournament was played this year at Oundle, with a good entry taking advantage of the generous support of the school. New faces included the youthful Johns – Minta and Beswick -, who kept the older entrants on their toes. Missing for the first time in many years were the ever youthful Bernard Atkinson and Bob Sandie; we hope to see them back to full fitness in time for next year.

As always, the standard of competition was high, with particularly fine performances coming from Stuart Kirby and John Beswick, both of whom avoided the rigours of the multitudinous plate games by being knocked out in the semi-finals of the cup; Stuart by Hamish Buchanan and John B. by John Minta. This set up an exciting final. The first game was won at a canter by John Minta, who pulled away quickly at the start of the second game and looked set for an easy victory, until Hamish gave him a fright, winning a late series of rallies. Eventually, however, John was triumphant, winning in 2 games. This was his first national singles trophy.

The first of the plate competitions featured those knocked out in the first two rounds of the cup. This was another knock-out competition, with victory finally going to Neil Roberts, who defeated Tony Hamilton in the final.

To complete the first day of the tournament, those losing in the early rounds of the plate played a round robin competition for a bottle of beer. Victor in this event was Brian Nithsdale, who won all of his matches with apparent ease.

Competition for the doubles cup was fierce. Eleven pairs took part, with both the singles finalists also featuring in the doubles final. Hamish Buchanan and Bruce Hanton were victors, beating John Minta and Brian Nithsdale in two hard fought games.

The doubles plate competitions followed the same format as the singles, with those knocked out in the first two rounds of the cup playing in a knock-out competition for the plate, and those knocked out in the early rounds of that playing a round-robin for a bottle of beer. The plate final was the closest of the weekend, with Hamilton and Warner overcoming Sutcliffe and Walter 16-15, while the bottles of beer were won by Kennerley and Kirk, who were victors in all their round-robin matches.

By late Sunday afternoon, everyone appeared to have played a satisfying amount of Fives. Indeed, many of those who endured the rigours of the bottle of beer competitions on both days felt that they had played too much.