Bob Dolby reports:  This was just the second running of this championship, which this year attracted 17 contestants. Sadly, both last year’s Singles finalists, champion Tessa Mills and runner-up Shinan Zhang, were unable to play. We missed the quality they would have brought to the event but their absence gave others the chance to make their mark and for new champions to emerge.

We began with three pools of Doubles, giving players from Bristol University, Fettes College, Rugby School, Marlborough College, Bedford Modern School and Alleyn’s School the chance to acclimatise to the courts and to the unaccustomed heat. For the two players from Marlborough it was also a chance to get used to play in courts of standard dimensions.

From the pools we progressed to a knock-out, where the match between Katie Sumner & Maddie Kent (BMS)  and Rugby’s Anastasia de Clermont & Maisie Harte stood out as a contest worthy of a later round. The semi-finals produced, firstly, a match where defending doubles champion Freya Harrison and her new partner Arte Denton dismissed the BMS pair with surprising ease and, secondly, a contest where 2017 Girls’  U18 champions Ibby Lee & Anna Laakkonen from Marlborough found themselves outmanoeuvred by Bristol University player Louise Mathias and outgunned by her scratch partner, Under 13 champion Martha Nugent from Alleyn’s.

And it was the same story in the final, where Freya & Arte fought hard but found themselves constantly under pressure from the experienced Louise and the hard-hitting Martha. It was not unexpected to find 20 year-old Louise carrying off the silverware but it is a rare and impressive thing to find someone as young as Martha winning gold at this level.

The losing semi-finalists played for the Plate, with Ibby & Anna winning.

After lunch we moved to Singles. The organiser decided to run two competitions: a knockout for the 10 strongest and a ‘Feast of Fast Fives’ for the remainder. In the latter event nine players played each other matches consisting of just nine rallies, with American scoring. The reward for the four most successful was an RFA mug. Jessica Cheadle from Fettes now has a set of two! The jury is out on whether the Triple F will be repeated next year. Perhaps a contest involving 81 rallies for each player is too much — or perhaps too little?

While the ‘fast fivers’ were trooping in and off court at regular intervals the knock-out Singles took place. Anastasia was too strong for Jessica in one quarter-final; Louise likewise for Freya; and left-handed Anna posed too many problems for Arte. Match of the Day, though, was Ibby versus Katie, a see-sawing game which Katie won 16-15, both players looking the champions they are in their respective age-groups. Katie’s exertions in this game cost her dear, however, in the semi-final against Anastasia, while Anna found Louise simply too consistent in the other half of the draw.

The first game of the final had the numerous spectators enthralled as first Louise, then Anastasia developed small leads. When it mattered, at 9-9, Louise found the extra accuracy needed in Singles and then in the second game she displayed the experience of the multiple champion she is, giving Anastasia little chance to get back in the match.  Louise thereby followed Tessa Mills in holding all junior titles — U13, U14, U16, U18 and now U23 — at some point in her playing career.

Katie meanwhile was forced to withdraw from the Plate game for the losing semi-finalists, leaving Anna to take a second trophy back to Marlborough.

We shall see some of these players again soon, I hope, at one or others of the Ladies Nationals in January, the Ladies Winchester Fives in March and the Mixed Doubles in May, not to mention the Girls’ Championships in April. The more these young people play, the better they will get. 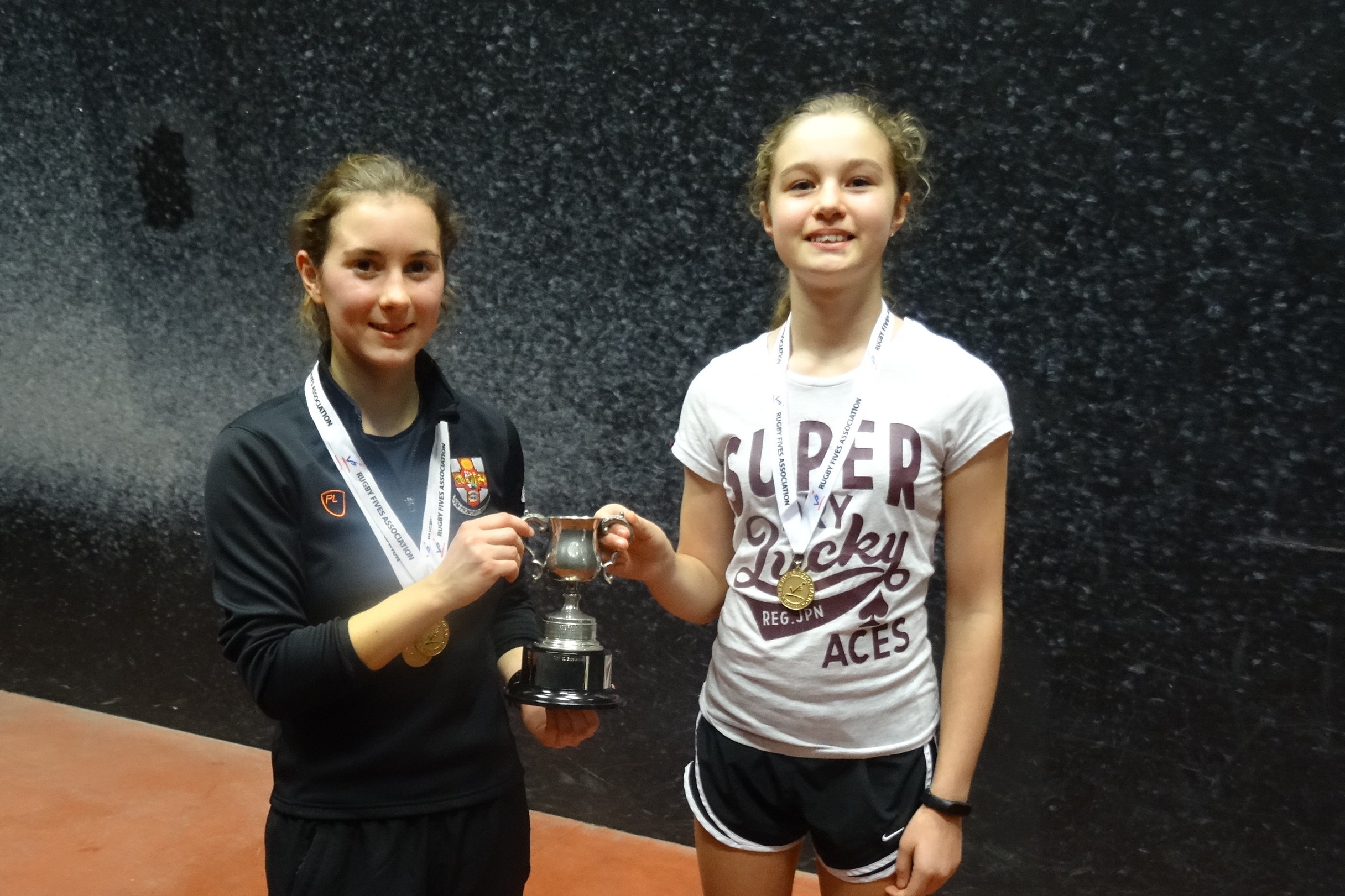 The new National U23 champions 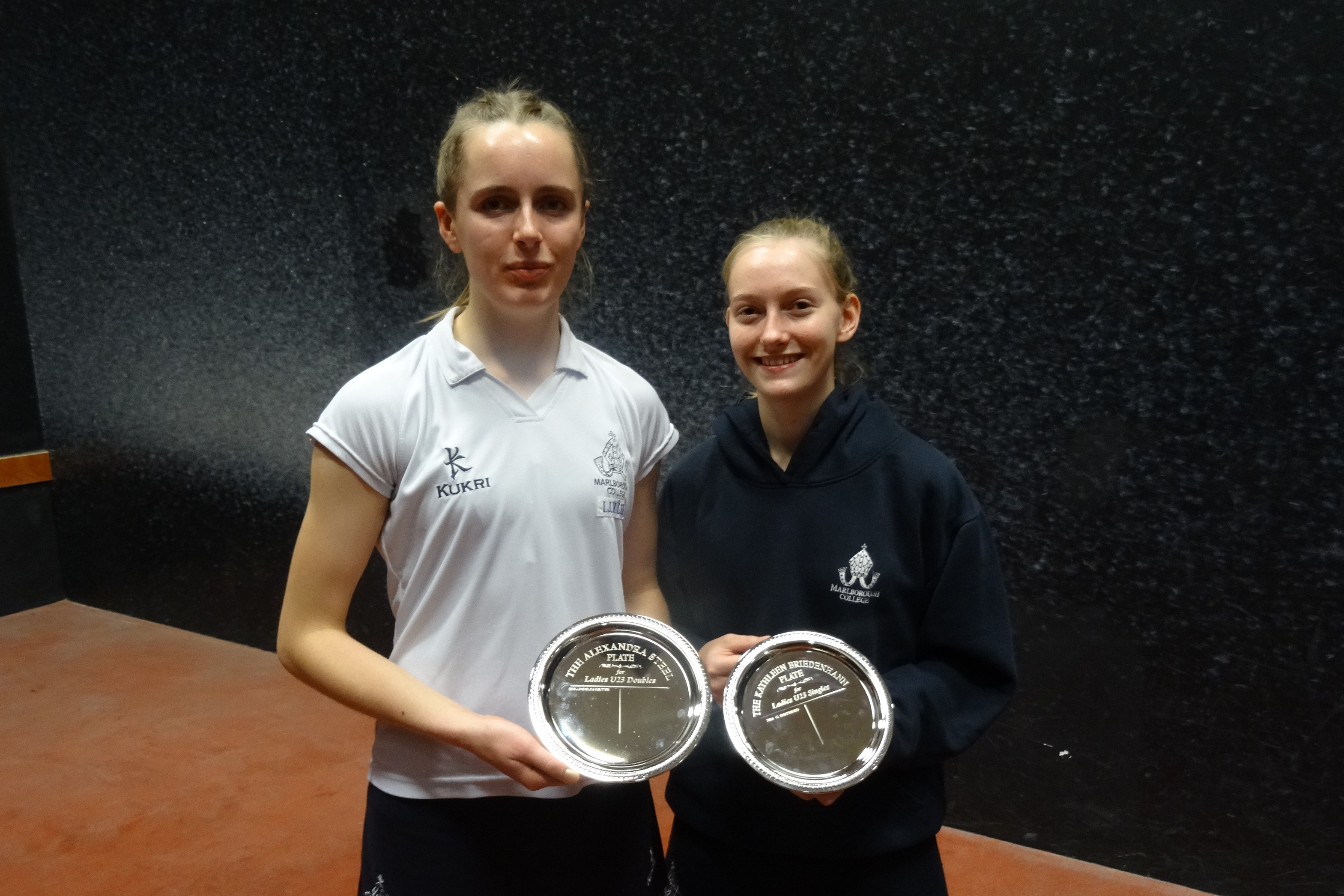 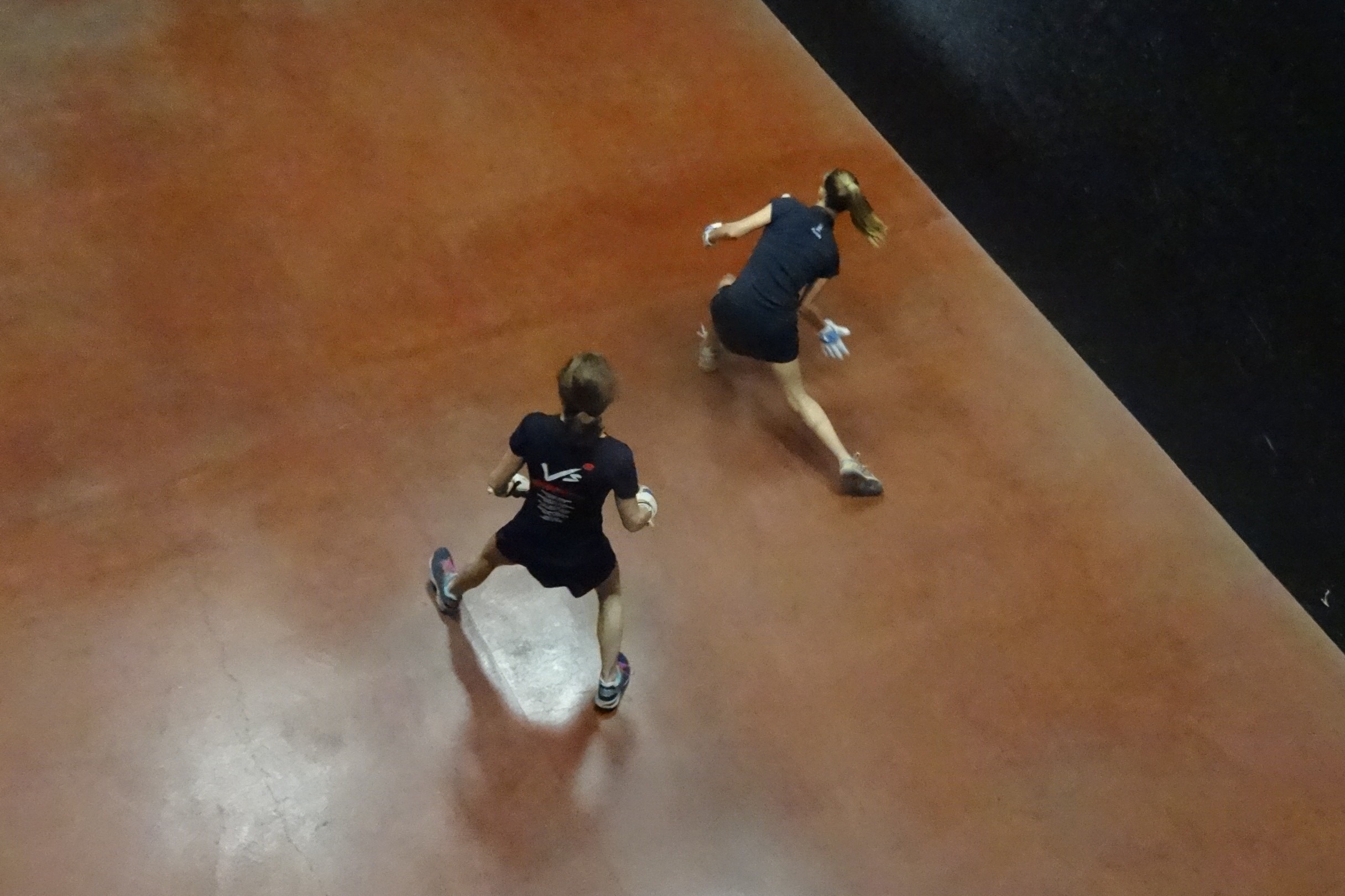 Action from the Doubles 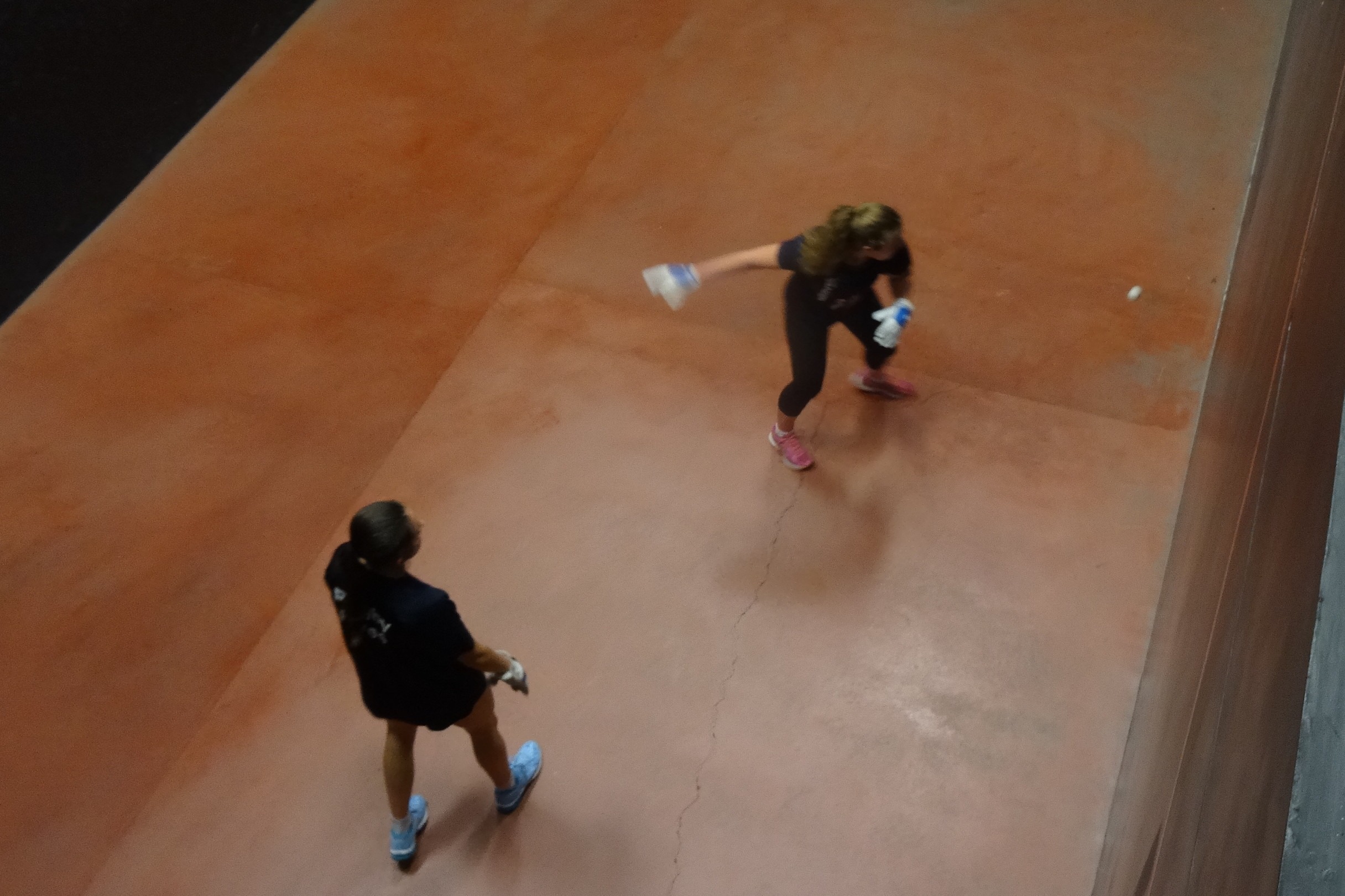 Action from the semi-finals ….. 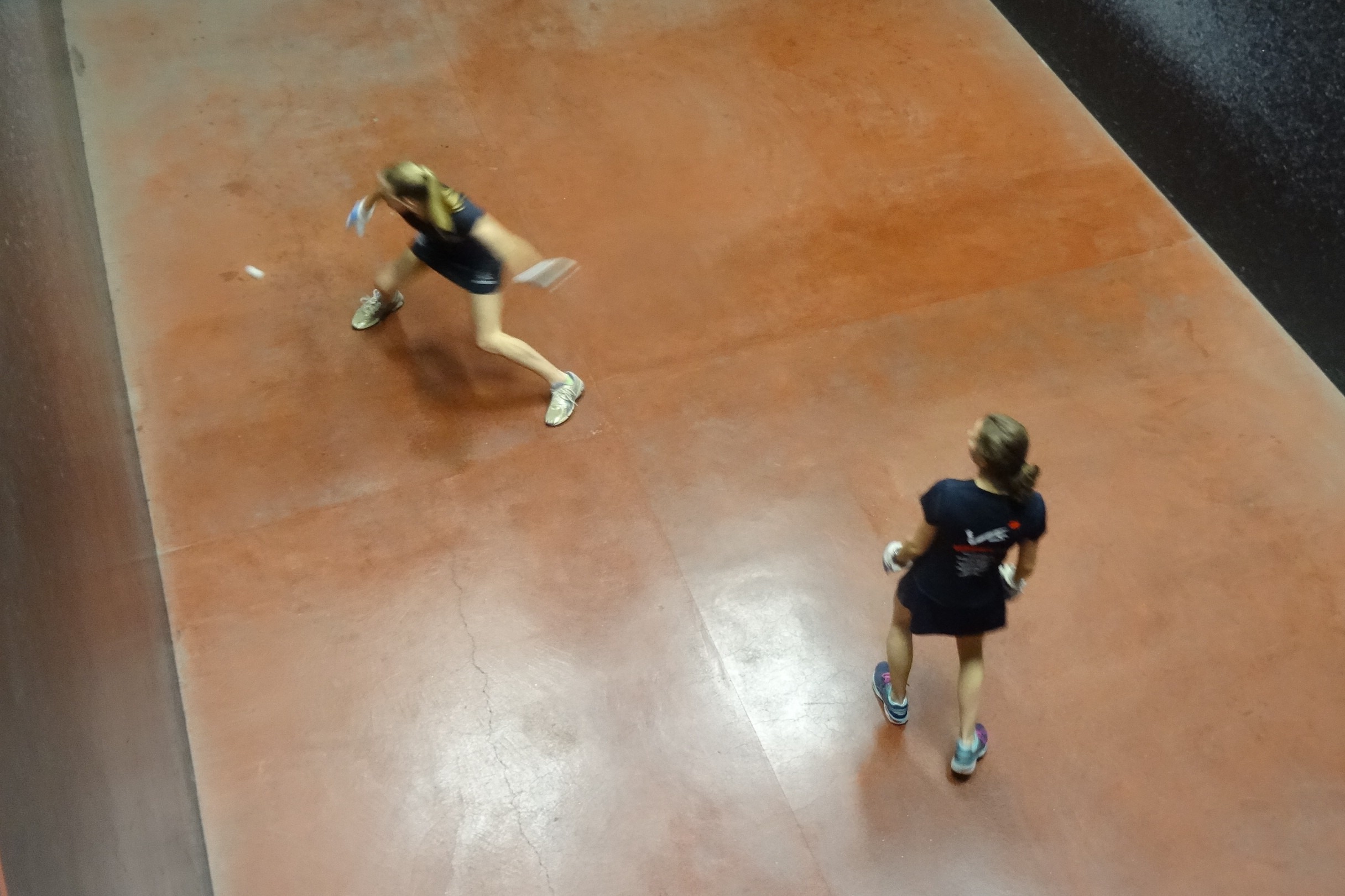