Richie Murby reports:  Due to the mid-March snow the Boyd Trophy tournament was moved to late April, but the players seemed not to have lost any momentum in the interim, with a high standard of play on offer for all who came down to the Fettes courts to watch. Moreover, 3 or 4 of the players in the draw, including the eventual winner, will still be at school for at least one more year, which is great news for the future.

Patrin Maddison of Loretto, though, will be leaving this year — but not without having made his mark, reaching the final after two gruelling and highly entertaining matches. The first, against Sean Yuille of Merchiston, seemed to be getting away from the Loretto No. 1 as Sean found his rhythm, but Patrin managed to raise the pace and find the urgency and quickness that the situation required, pegging back a 13-12 deficit to get over the line, 15-13. Thomas Peel of Edinburgh Academy, fresh from an impressive National Schools performance at St. Paul’s, competed well against Patrin in the semi-final, but the longer rallies tended to go against him in an entertaining, flowing match where experience ultimately told.

Merchiston’s Doug Tidy did not have to dig as deep on his side of the draw, partly because his quarter-final opponent, Daniel Jourdan, was carrying an injury sustained earlier in the day. In the semi-final, Doug’s patient, error-free attacking and unruffled defending, along with his composure and positional awareness, prevented a potentially very difficult challenge against Grant Sperling  of Fettes from ever fully materialising.

In the final, Doug used disguised down-the-wall right-hand shots to devastating effect against a tiring opponent, and he was able to find winners and force errors despite Patrin’s dogged resistance. Doug was a worthy winner, then, who we shall look forward to seeing play one more year at school level.

In the plate, Sean Yuille came through an epic semi-final against the heavy-hitting, all-retrieving and visibly fatiguing Evan Li of Fettes, who at times pulled retrieves and winners out of the ether but perhaps couldn’t quite match his opponent for fitness or consistent accuracy. Sean’s fine technique and precision saw him through the plate final against the rapidly improving Daniel Jourdan, who made a good game of it and made sure that Sean had to fight for his victory.

Thanks as ever go to the much-missed David Boyd and his wife Sarah for donating the Boyd Trophy and helping to create this wonderful tournament — and again to Sarah for coming to present the trophy.

And in events played earlier in the season: 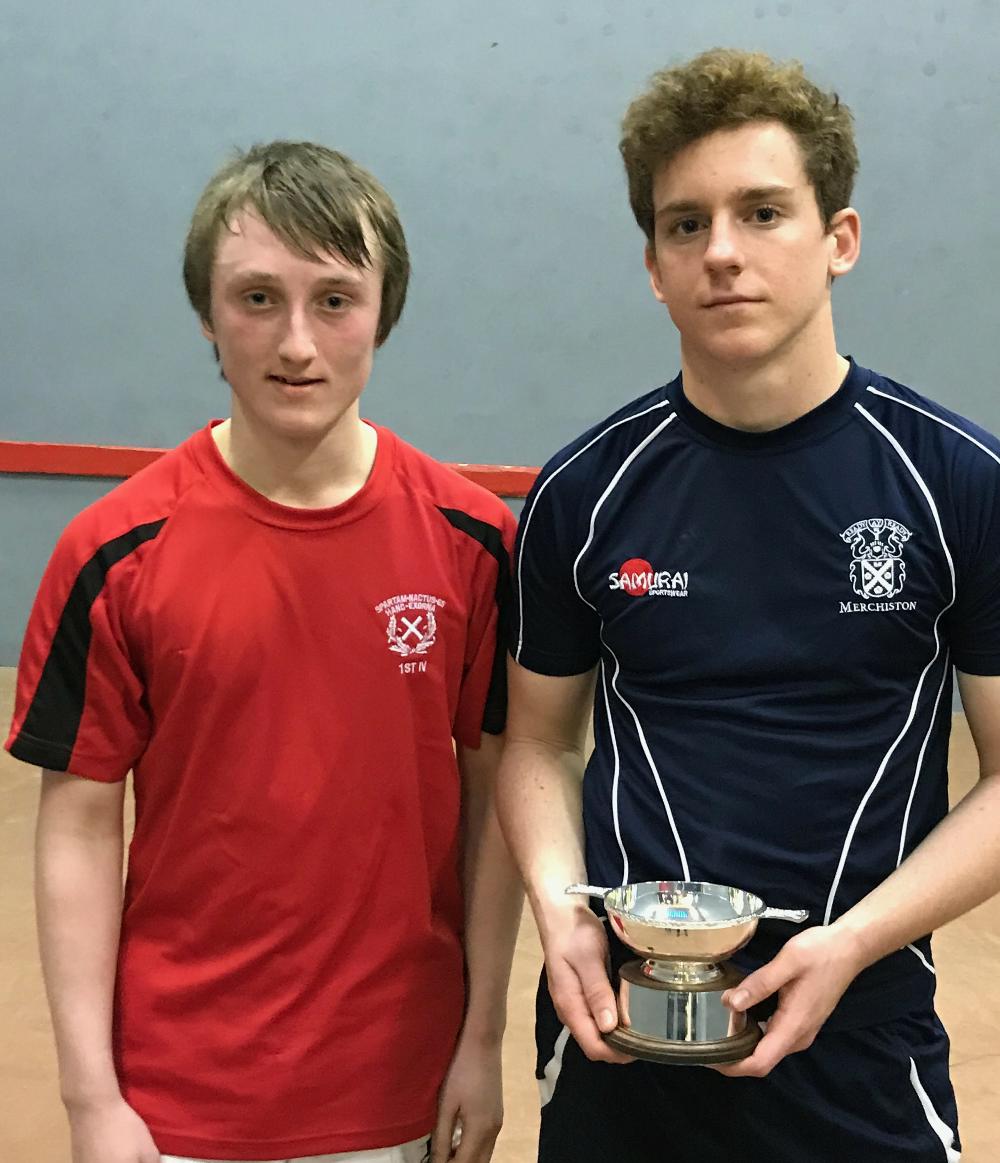 The U18 finalists with the Boyd Trophy 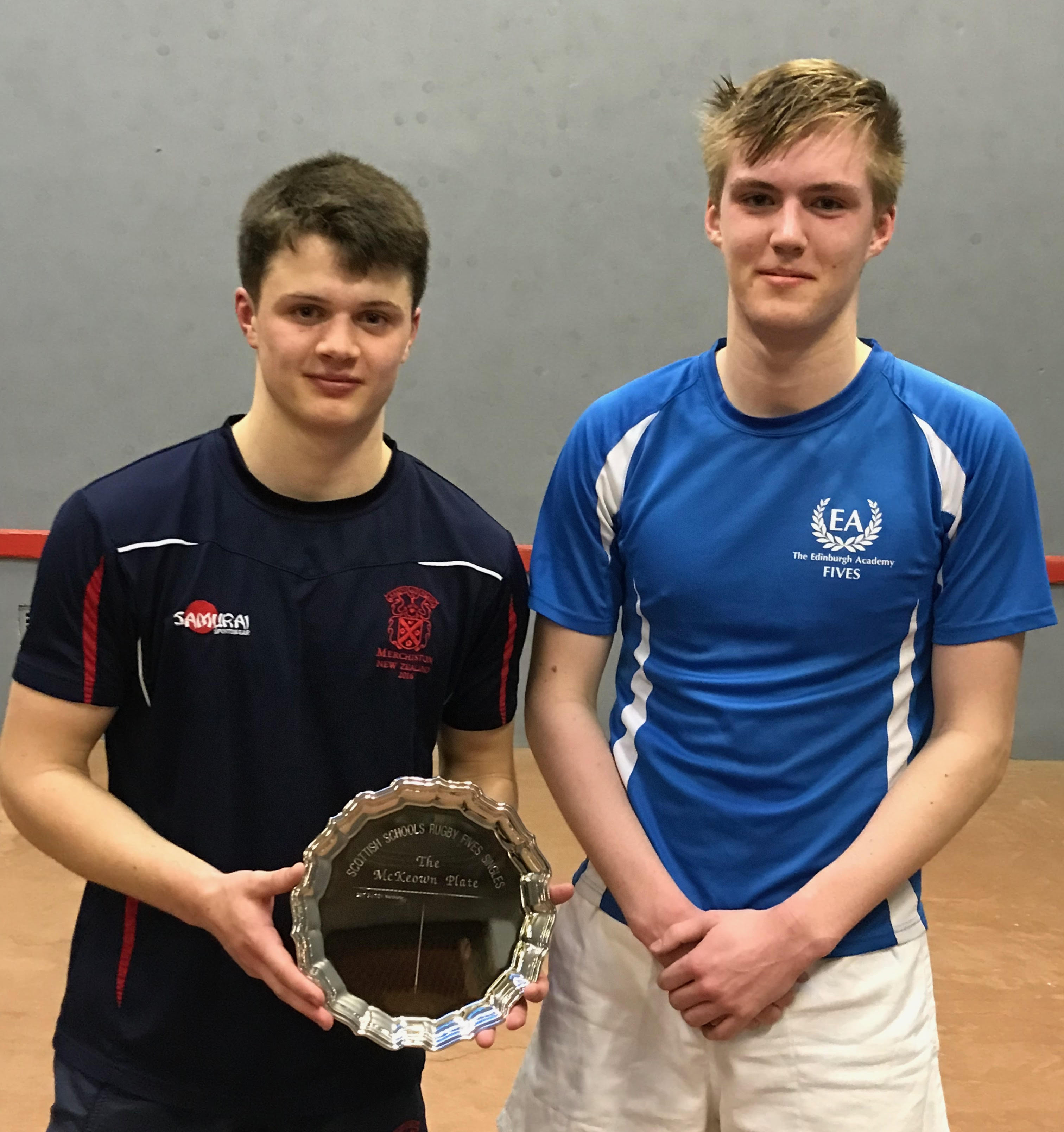 The U18 Plate finalists with the McKeown Plate 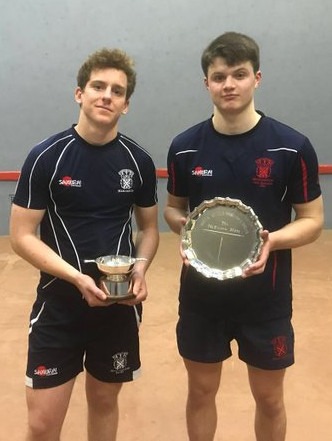 The Merchiston players with their silverware