The Old Paulines reinforced their position as the country’s premier Old Boys team with another victory in the Owers Trophy. It was their ninth win in the last 11 years, and one of the most emphatic.

To be honest, the result was no great surprise, but as ever with a team Fives competition, this year’s Owers Trophy took a few unexpected twists and turns before the winners were able to get their hands on the trophy.

For example, when the players started to arrive at the courts – and, indeed, after the first matches in the round-robin had started – it was thought that there would be six teams competing. However, as the morning wore on, it was discovered that only four teams could make it after all. So, a competition that had been planned as two groups of three turned into one round-robin group of four, with the results of the matches that had already started being carried over.

Mind you, that new format was only a few minutes old when it became clear that the Old Paulines and Old Bradfieldians were the best squads. Indeed, they went on to score comfortable wins in their opening two matches – against the Old Eastbournians and a scratch team drawn from a squad of two Alleyn Old Boys, one from the Old Bedford Modernians and one from Merchant Taylors’.

In the end, after some careful scheduling, it meant that the final matches in the round-robin would decide the destiny of the trophies. The clash between the Paulines and the Bradfieldians would decide the winners and runners-up, while the Eastbournians and the scratch team would fight over the Plate.

It was the second match that by far the closer. In fact, it was the only one on the day to be won by two games to one; every other match had been won 3-0.

The scratch team took the first game quite comfortably, only for Eastbourne to strike back even more emphatically in the second, giving them a two-point lead going into the final game of the match.

That pitted Andy Pringle and Marcus Bate against Hamish Buchanan and Nick Geere, and it was the two Alleyn Old Boys who started off more strongly. They went into a 7-3 lead, but at that point, something seemed to click in Andy and Marcus. They began to find their length and angles again, and went on to record an 11-8 win in the game, securing the plate for Old Eastbournians.

There was plenty of fine Fives played in the final, but the end result was far more one-sided. The Pauline side – Ed Kay, Julian Aquilina and Henry Jefferies – simply overwhelmed the Bradfieldian side of David Butler, Ed Ronan and Tim Hebblethwaite. It was a welcome return to the competition for the Paulines, who hadn’t been able to raise a team for the 2017 event. However, it also meant the boys from Berkshire sealed the perhaps unwelcome hat trick of having been the runners-up for the last three years. 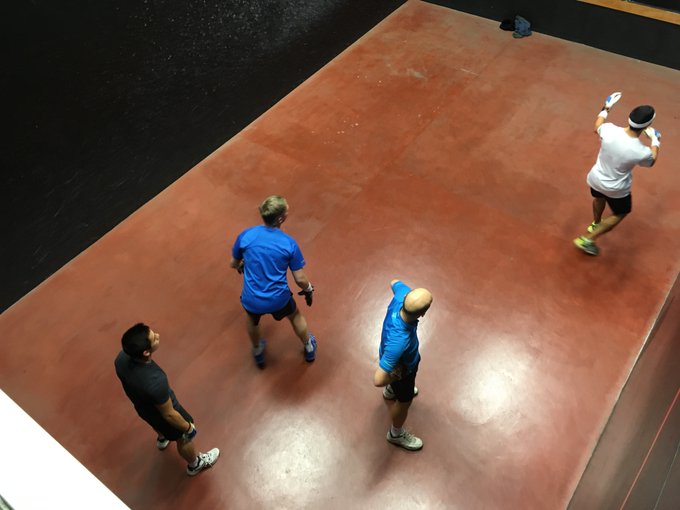 Action from the final – Aquilina to Bate 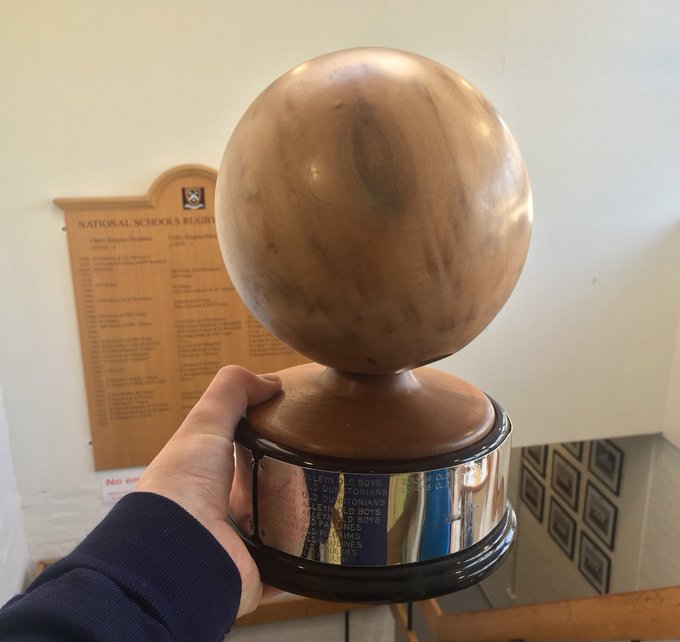 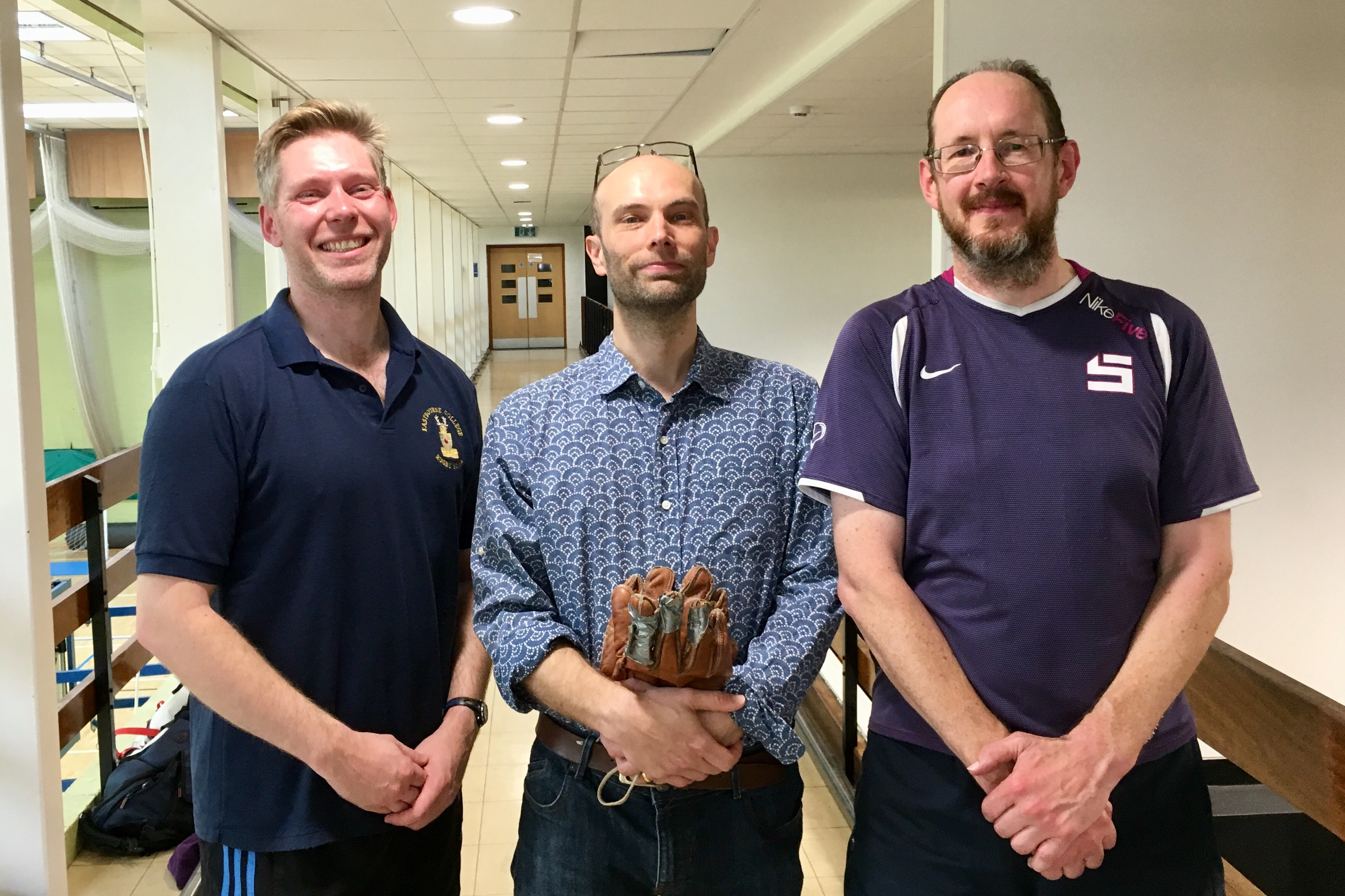 In lieu of the President 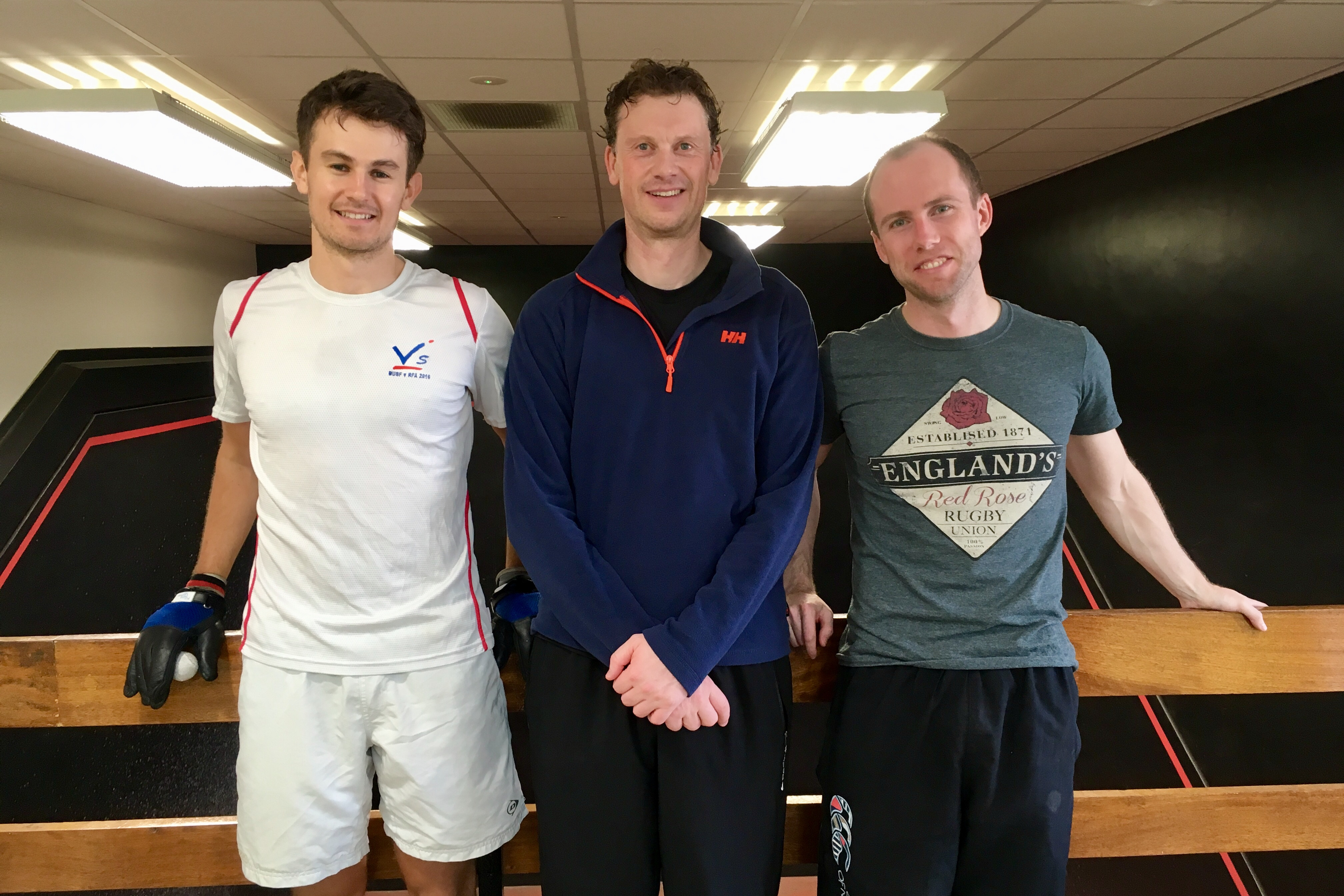 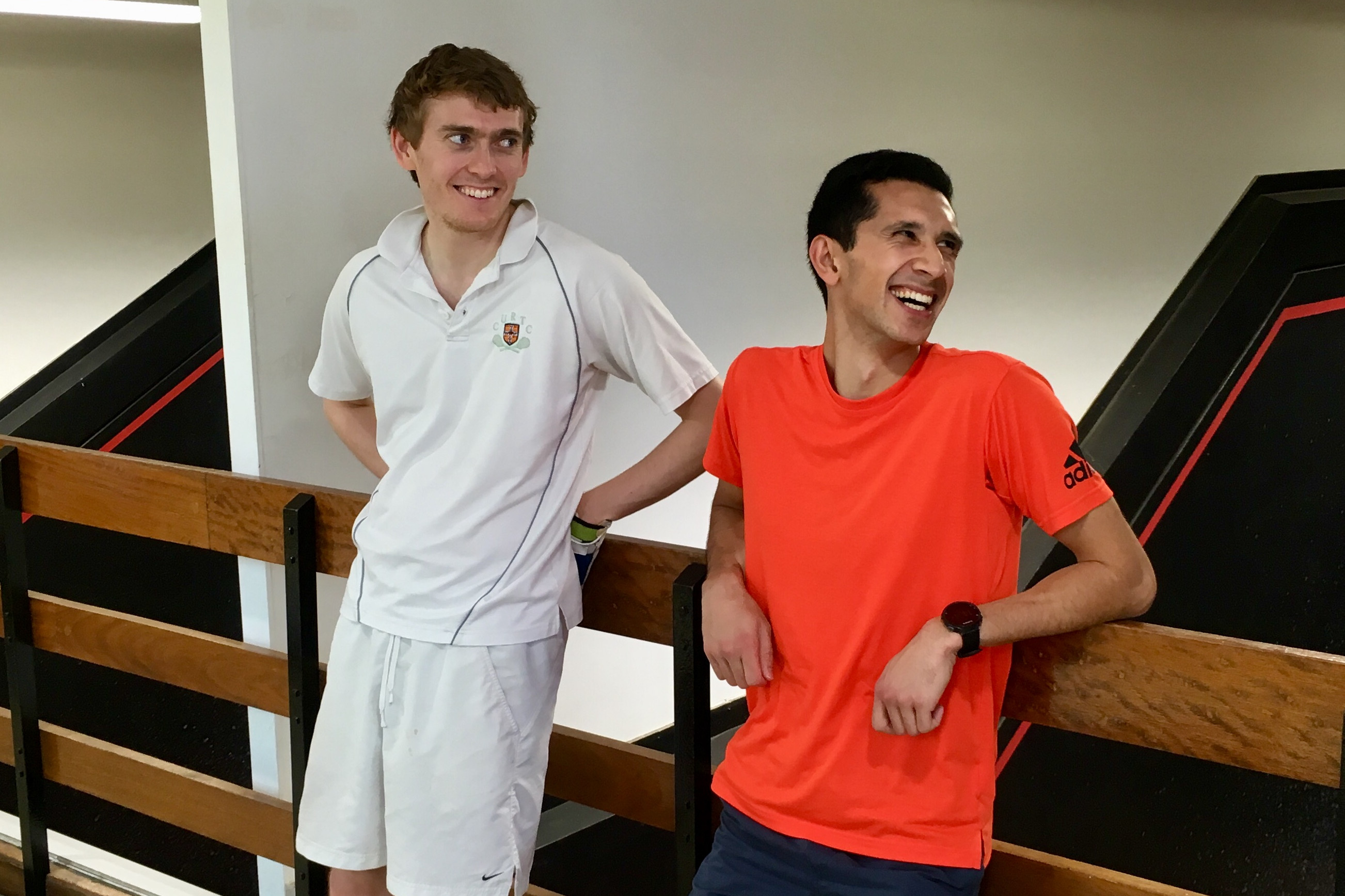 All smiles from the OPs 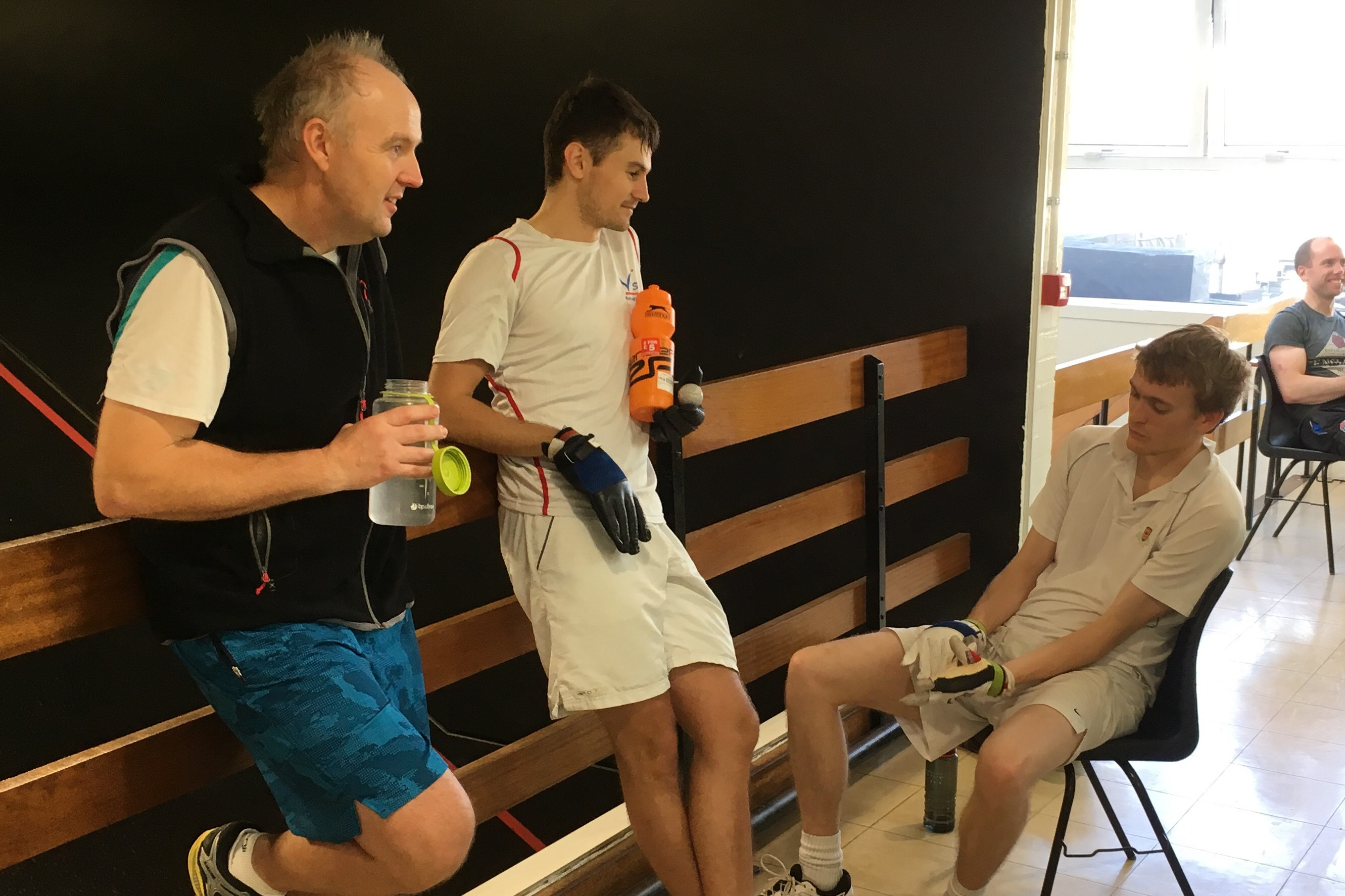 A moment of repose