Organiser Will Ellison writes: The 23rd London Open was held at St Paul’s School and, this year, there were several new champions’ names to be etched onto the trophies.

Ed Kay backed up his win in the South-East Open semi-final against Will Ellison to win his second open singles title in a hard-fought match over three games. Meanwhile, debut pairing Will Ellison & Matt Shaw lived up to their top seeding to win the doubles title against Dave Butler & Dan Grant, themselves playing together for only the second time.

The singles on Saturday started out according to seeding, although Alan Bowden and Rob Whitehorn’s marathon three-gamer in the round of 32 must be acknowledged. In the end, Alan appeared to run out of steam in the third game, having come back from losing the first game to win the second to five points. Overall, it was a titanic effort from both players!

The depth of the draw was evident in the round of 16 – which featured 13 of the top 20 ranked singles players in the country. Amazingly, three of the eight games went the distance, with Matt Shaw battling through against Ollie Arnold, and Charlie Brooks overcoming an 11-1 deficit in the first game to come through the final two games relatively comfortably against James Tilston. However, the game between Ben Beltrami and Sam Russell was a true classic; and, with Ben only winning 12-11 in the third, having saved a number of match points, it was a match that could quite easily have gone either way. Ben’s spider-like reach saved the day on a number of occasions.

The quarter-finals again went to seedings, although Matt Shaw pushed Will Ellison hard in the second game to force him to dig deep – Will eventually came through 12-11. Charlie Brooks and Dave Butler locked horns in a long and gruelling game that Charlie eventually won 12-10, 12-10, leaving him a tough job to recover for a semi-final against Ed Kay.

In the semi-finals, Will recorded an 11-6, 11-6 victory over Dan Grant, while Ed beat Charlie comfortably 11-3, 11-3 – the second game had finished during the break of the other semi-final!

On Sunday morning, Will and Ed played for the 11th time in an open tournament, with Ed claiming his second win over Will and first in a final. Ed had a strong start, quickly gaining a 6-2 lead in the first game. Will pushed hard to get back into the match – after many long rallies, two of which must each have been around 100 shots, Will pulled the game back to be all square at 7-7. Ed hit several deft reverse-angle drop shots and a few round-the-walls winners to eventually clinch the game 11-9. The second game started very close, but once the score went to 4-4, Will found a great patch of rhythm to take the game 11-4 in dominant fashion. Will pushed through to a 2-0 lead in the decider, but at this point started to make several errors and this – coupled with several lethal drop shots from Ed – led to a quick run of points, sealing Ed his first singles title here.

It was great to have so many enthusiastic participants in the singles plate, and encouraging to have so many students take part alongside some of the more experienced players on the tour! In the end, youth beat experience, with James Smith (formerly Winchester College, now Manchester University) taking on Pete Winzeler (who learnt his fives at KCS Wimbledon and is now back in the UK, teaching in Guildford) in the plate final, once Alan Bowden and Tony Hamilton, respectively, had been seen off in the semi-finals. James ended up prevailing 15-12 to win his first open silverware.

The doubles tournament started while the singles final was being played, so the organiser sadly missed some of the opening action! From what he has heard, though, the pick of the games has to be Anthony Goodwin & Ash Hill’s epic battle against Peter Hanton & Henry Jefferies, with the latter pair prevailing in three games.

The quarter-finals went to seeding, although Dave Butler & Dan Grant had to battle through in three games against an on-form pairing of Julian Aquilina & James Tilston. Meanwhile, Hamish Buchanan & Sam Russell had a very tight second game against current Yorkshire Doubles champions Ollie Arnold & Theo Parker. In fact, Hamish & Sam had a 10-4 lead, but somehow the Bristol students managed to recover to win 12-10 and book their place in the semi-finals.

In the next round, Will & Matt Shaw, the top seeds, managed to come through in straight games against Ollie & Theo – weathering a storm of powerful and accurate hitting from the students. However, the other semi-final was a closer affair: Dave & Dan were quickly beaten to 3 in the first game by Ben Beltrami & Ed Kay, but managed to hold on in a tense second game to take it 11-9. In the decider, Dave & Dan nearly squandered an 8-0 lead, with Ed & Ben taking the score back to 9-8. However, after several changes of serve with no points, Dave & Dan eventually sealed the game to 8 to set up a final with Will & Matt.

In the final, Will & Matt exhibited a largely error-free display to take their first title together 11-4, 11-1 – Dave & Dan’s tough semi-final may have helped with the scoreline.

In the doubles plate, a round-robin format was used for the four pairs that had lost their first matches. There were several close matches – including two that ended up 16-14. In the end, the final was played out (in an all-Alleyn’s match) by Angus Hanton & Nick Geere against Julian Hanton & Ben Kirwan, with the younger pair winning fairly comfortably.

Many thanks to all the participants and spectators for making this one of the most memorable and exciting regular fixtures on the circuit – it was great to see many of the players who played for the first time last year at Alleyn’s come back again this year, and we hope that they play in many years to come! We must of course thank St Paul’s School and their generosity in letting us use their courts and facilities once again.

We look ahead to next year, when the 24th tournament looks set to return to Whitgift! 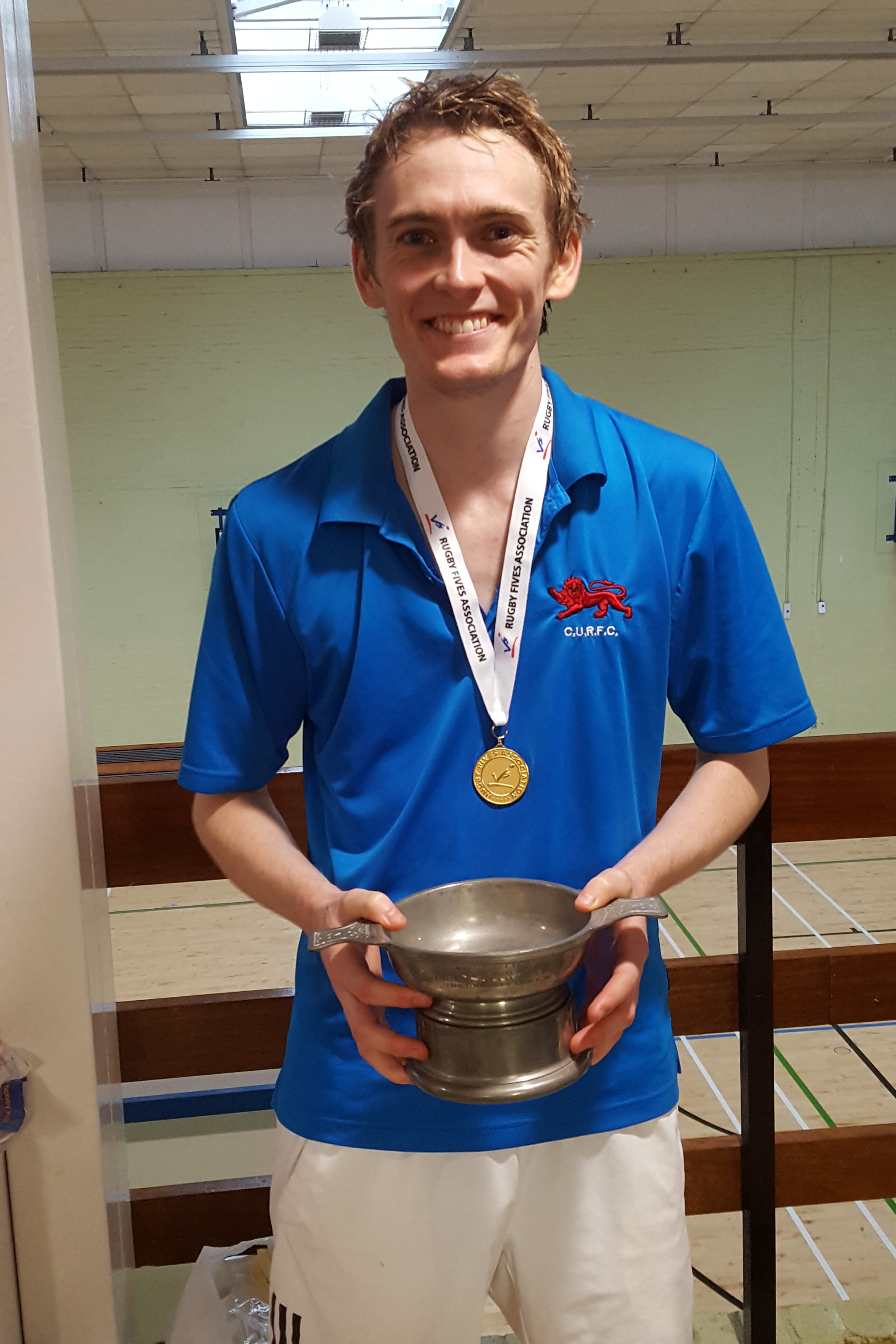 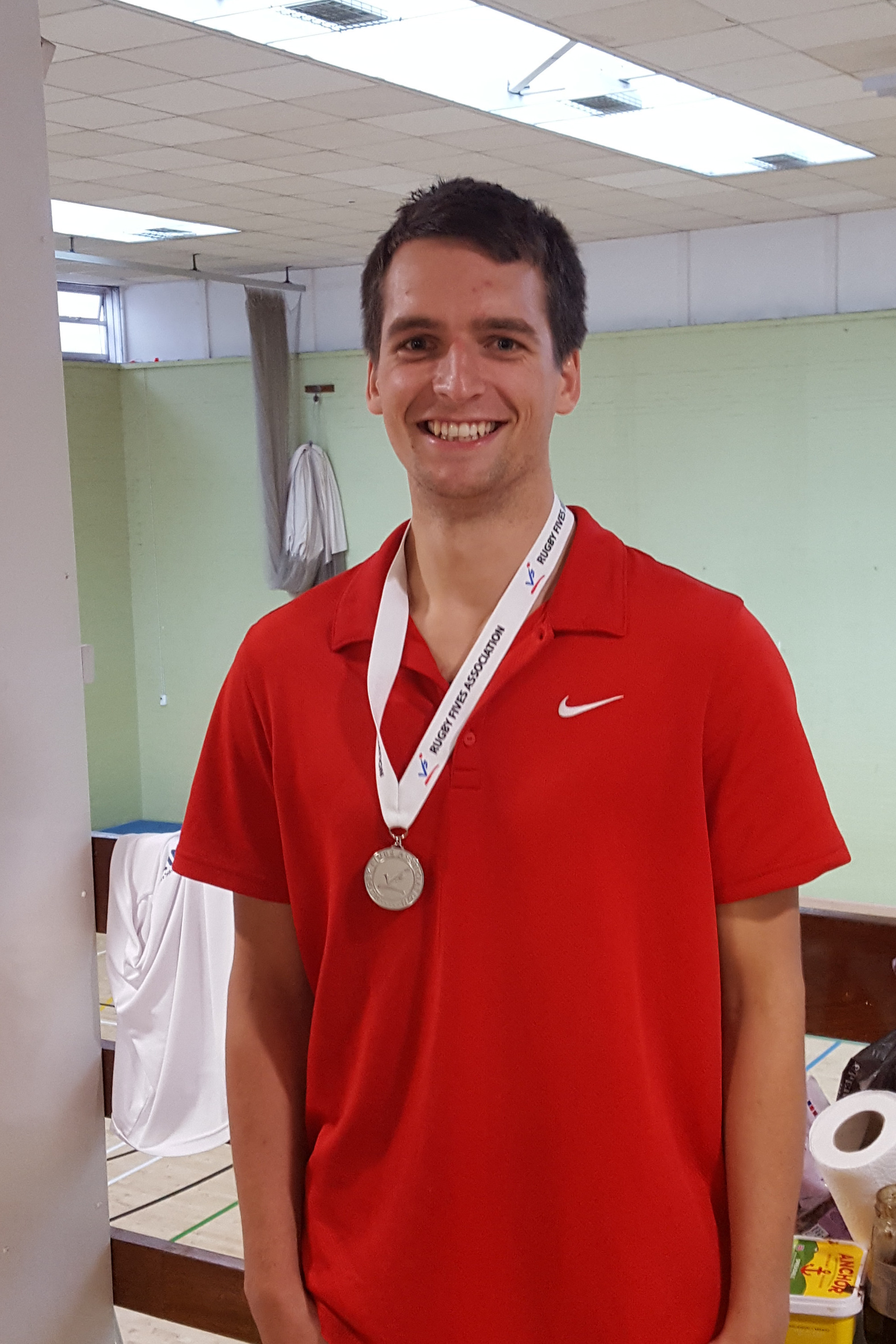 Runner-up in the Singles but champion in the Doubles 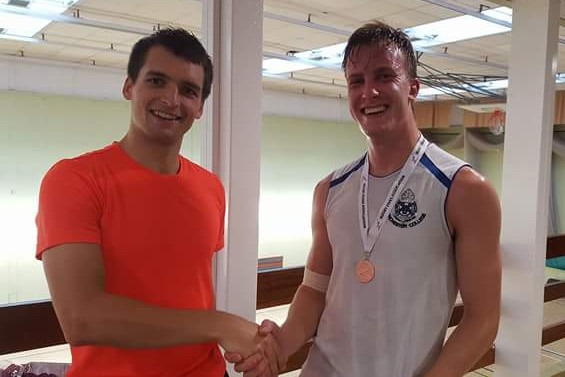 A first-time medal in an open event 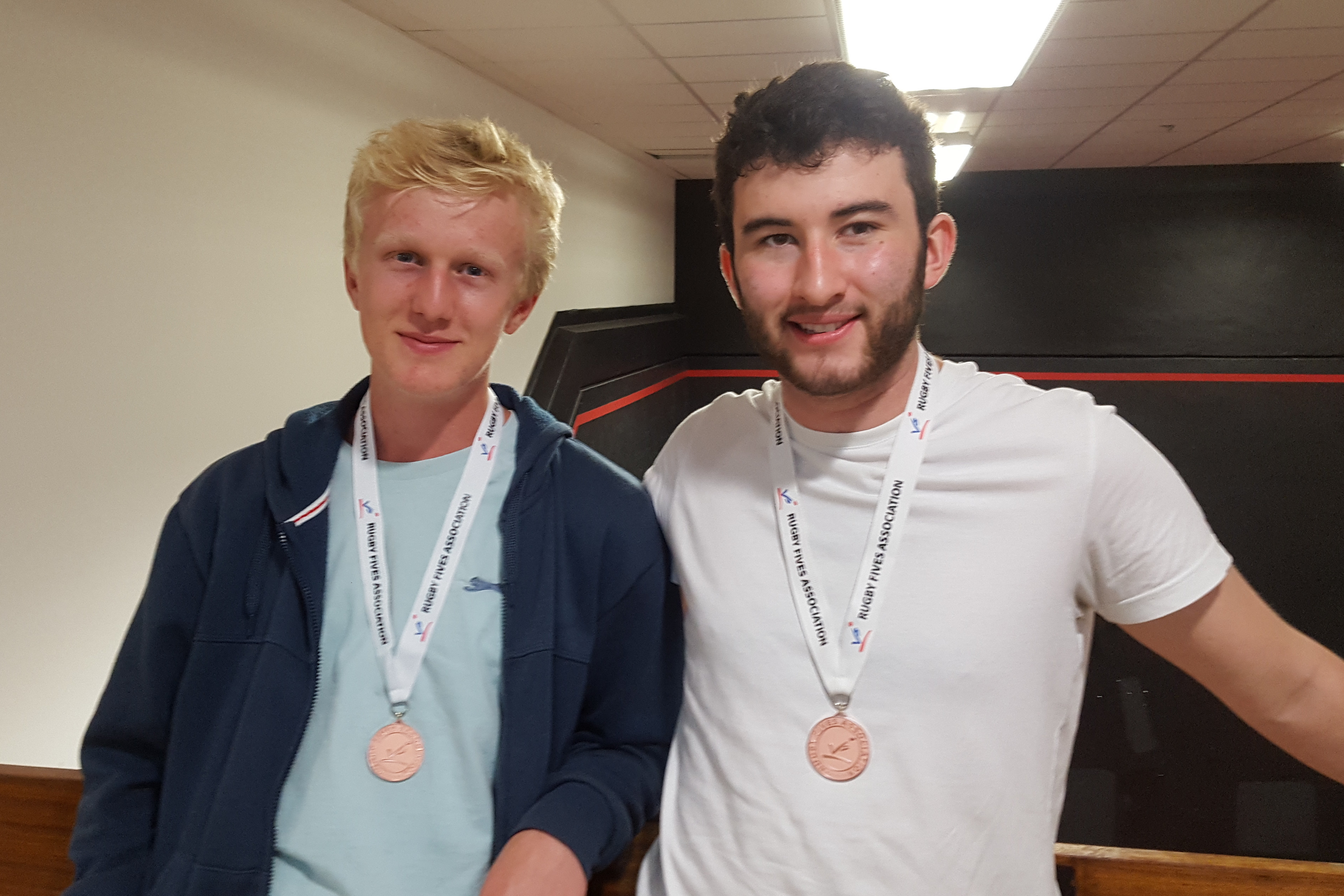