The 28th Jesters Fives Tour to Edinburgh proved to be the biggest ever, with 38 players in total, including 8 undergraduates, 2 postgraduates and 2 ladies, themselves students.
This year the tour was run by Ben Hale and Dave Butler, having taken over from Frank Akerman and his son Harry, who had masterminded this event for all of its previous existence.

The organisers report: The tour started on Friday with the traditional Cumberland Lunch, where new tourist Louise Mathias controversially had salad alongside her mac and cheese unlike the seasoned campaigners, who went straight for the chips.

The Fives commenced with a Jesters vs. Durham University fixture at Fettes – the Jesters won 158 to 153 – and a Jesters vs. the Edinburgh Academy Juniors and then Colts. Naturally the only winner here was the game of Fives itself. Visits were also made to Merchiston and Loretto to take on their Colts sides – one further victory each for the Jesters and the game of Fives.

The highlight of Friday’s play is always the Select VI tournament held in the evening at Fettes. The evening was its customary great success: all six schoolboys played wonderfully well, especially the eventual winner, Doug from Merchiston, and the runner-up, Evan from Fettes.  Commiserations to Grant, who found himself partnering Ben Hale – some sabotage involved here but we won’t go into details.

Friday concluded with the wonderful curry reception at Fettes, where it was lovely to see such a gathering of Fives players, staff and parents.  The brand new Akerman Cup was awarded to Doug (see photo below), along with a Jesters shirt that they had been kind enough to donate as a prize.  A visit was then made to The Shack. Unfortunately no record was kept of individual matches played on the dance floor but we understand that there was Doubles as well as Singles – with coaching provided to the locals.  We plan to return next year.

Saturday morning saw the entire tour party on court except for Ed Hawke and Alex Smith – they had of course planned a Singles but alas, no court space.  A Jesters VIII took on a RFA VIII across the Fettes and Edinburgh Academy courts. We don’t have the results of the matches between the first and second pairs but, excluding those, the Jesters have a 207 to 206 lead. We can only presume the RFA edged those matches by a point, thus ensuring a tie.

Things were not so even at Merchiston, where both Southampton University and the Edinburgh Schools handed out comprehensive defeats to the Winchester IV, with the Scots then taking their game against Southampton 54-50.  Up at Loretto the serious stuff was underway and a Jesters VI prevailed 146-138 over the Caledonian Club.

Lunch was taken at The Antiquary – a new venue secured at late notice by Jez Sinton following a slight organisational mishap that we won’t go into.  It was a resounding success and we hope to return for years to come.  The Jesters spent the early afternoon at Fettes playing alongside their Under 13s and Girls sides.  This was great fun, and many victories for the game were recorded particularly by Alex Smith.  We left Alex and James Pinder playing the leading Fettes Girls pair and are yet to hear of that particular scoreline…..

These games were followed by a clash with the Combined Universities and, sadly, our first loss of the tour by 98-96.  Special mention here must go to the Universities second pair of Shinan Zhang and Louise Mathias, who defeated the Jesters second and third pairs.  Our understanding is that they outmanoeuvred the more experienced opposition with Akermanesque  dropshots and length play.

Saturday afternoon at the Academy was the turn of the Old Boys sides.  First, the hotly contested Sinton-Matthews Cup between the Old Bradfieldians and the Old Blues.  No scorecard exists but we gather that the five Old Blues defeated the three Old Bradfieldians – surely Guy and Jez can provide further information (but see photos below) – was followed by our second loss of the tour, this time by a single point to the Edinburgh Academy Old Boys, 96-95 (see photo below).  This is a new fixture and one we very much hope to keep next year and hopefully win!  Matches were also played against the Loretto Colts and Girls and Merchiston Junior Colts and 1st IV – two wins for Fives and two more for the Jesters.

We once again returned to La P’tite Folie for dinner.  Virginie and her team looked after us as wonderfully as ever and we very much hope to enjoy their hospitality next year.  A few words were said by Matthews and Smith and glasses were raised to absent friends particularly, but not exclusively, Frank Akerman, Bev Boag, Andy Passey, Tony Metcalfe-Gibson, Andy Wiliamson, Richard Guthrie and Robin Thompson.

Sunday morning saw a second match against the Caledonian Club at Loretto and a second Jesters win, this time by 148-135.  Many thanks to Mike Kemp and the rest of his players who provide us with the toughest of opposition each year and will no doubt be back next year to avenge this double.  We followed this up with a full Scottish breakfast at the local café and an extraordinary pairs tournament alongside the Loretto 1st IV.  Congratulations go to Patrin for managing to get some winning Fives out of Rich Lebon.

Merchiston hosted the inaugural Layton classic. The scorecard for this makes confusing reading – we understand the snow had a part to play in this – but it looks like the Jesters picked up the victory here, too.  At the Academy we took on their 1st IV and prevailed 111-83 – with Smith and Matthews then retreating to Edinburgh’s finest Thai restaurant, having staged a dramatic comeback from 12-3 down in one particular game.

Sunday at Fettes saw games with their Junior Colts, Colts and 1st IV.  Once again the records show only victories for the game of Fives; however, we fear next year we will not be so lucky – Harry kept the boys on court to carry out a dropshot clinic; sounds like a match for Smith and Matthews next year…

Overall it was a thoroughly enjoyable weekend and it only remains for us to thank our drivers for their sterling efforts and sobriety and all of the tourists for bearing with us in our first year.  There were no major mishaps, with all fixtures being fulfilled and a vast number of schoolboys and -girls involved in matches either with or against Jesters.  One final mention to the debutants. especially the six lads from Durham: they were an absolute pleasure to have all weekend, we hope they all return for years to come. 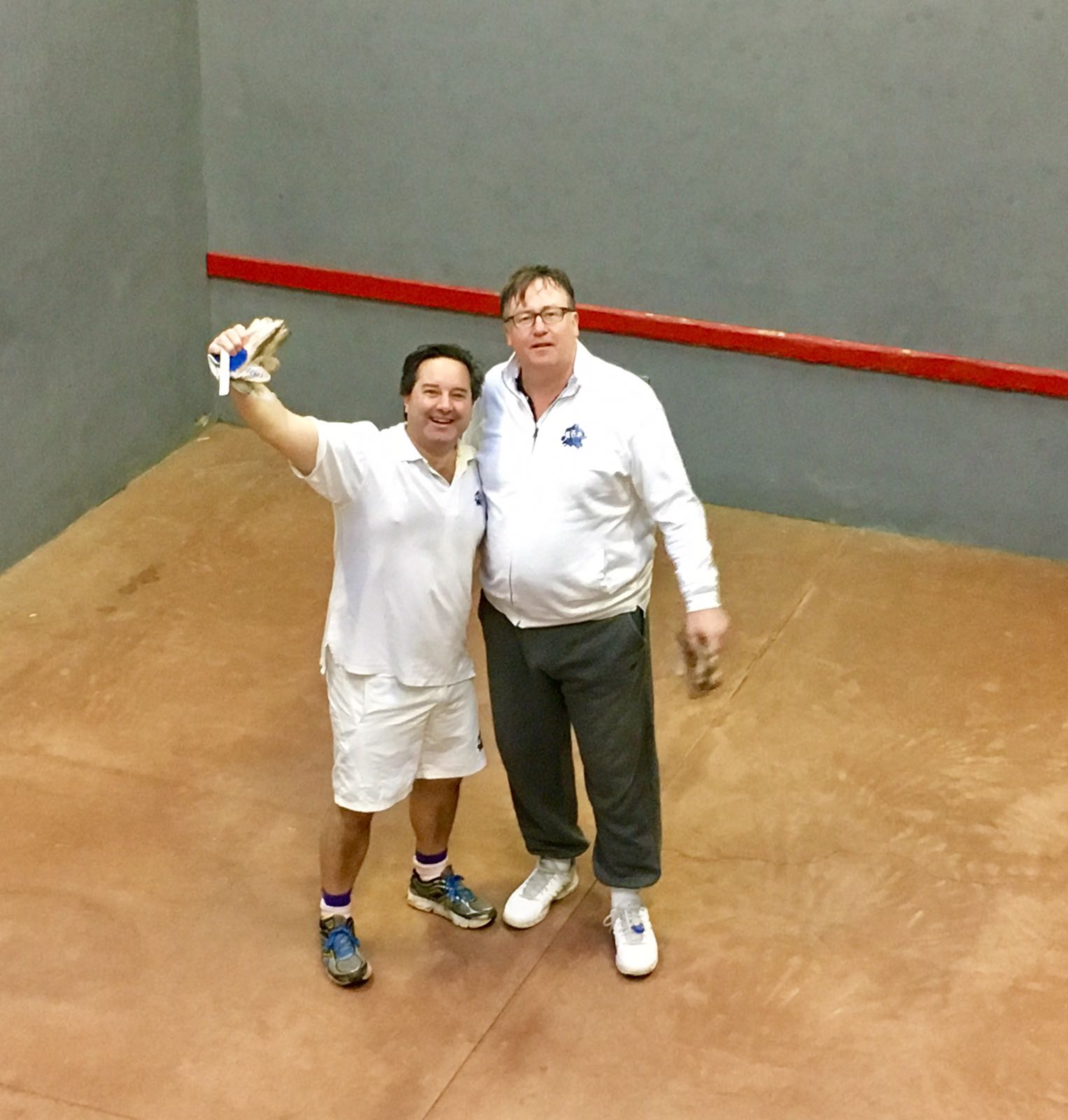 Stalwarts Will and Duncan embody the Jesters spirit 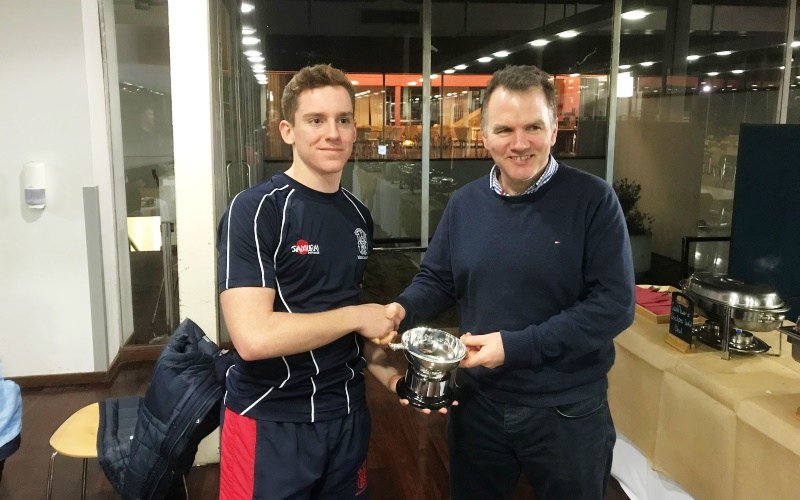 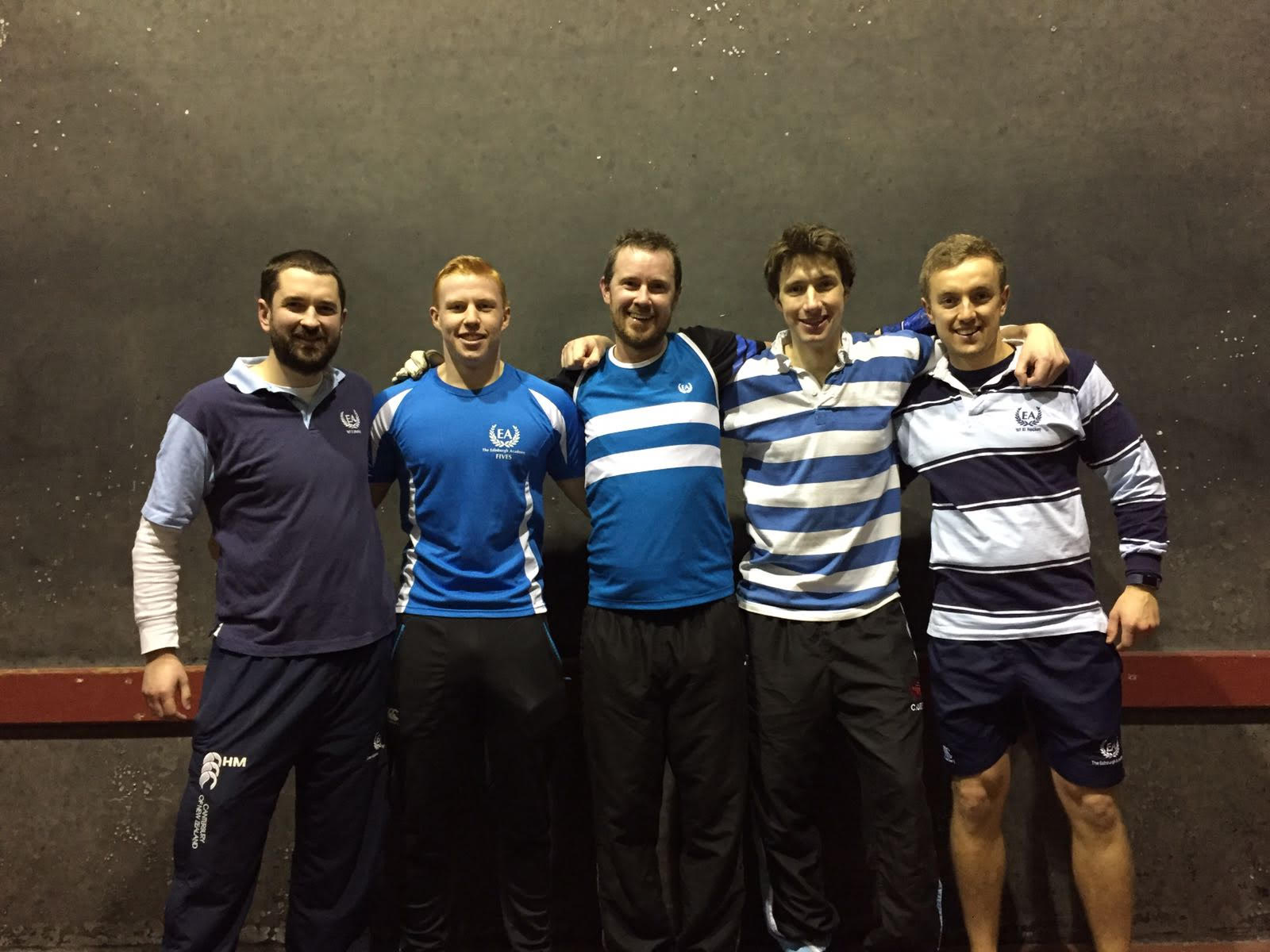 Five of the Old Edinburgh Academicals VI – the sixth must have been taking the photo! 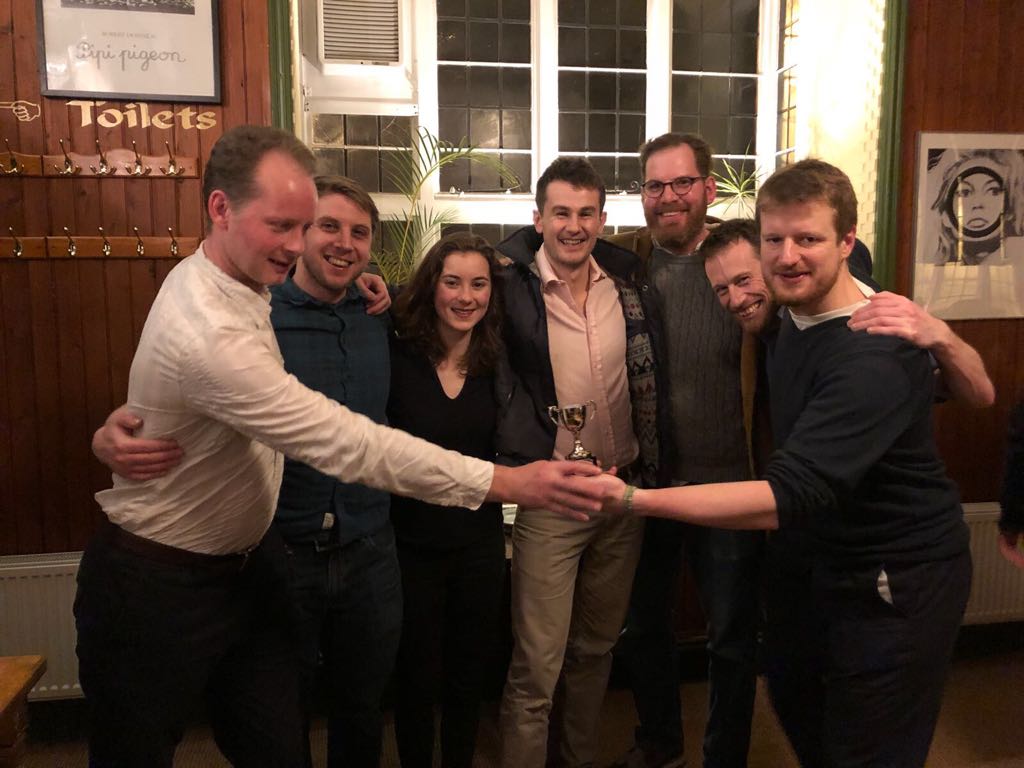 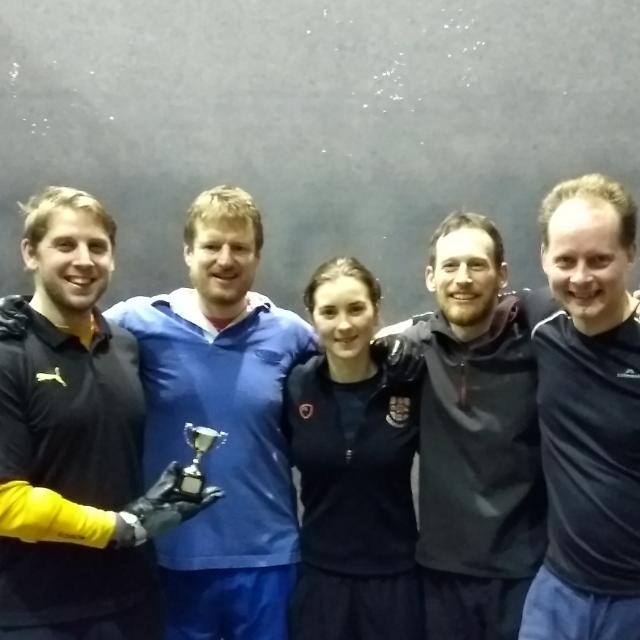 But we were the winners – this year!