STOP PRESS: A change of names on both trophies this year as Kathleen Briedenhann regained the Singles title she had previously won three times, while Alexandra Steel & Maddy Raynor finally secured the Doubles title in their 4th consecutive final.

Organiser Alexandra Steel reports:  A much smaller entry of 9 players this year led the way for an intense day of fives, showcasing the truly great standard of the ladies at the top of their game. Many thanks go to Emily O’Malley and to Aiysha Alli and her father for coming along at such short notice to partner Louise Mathias.

The morning began with Singles, due to an odd number of players and wanting all to be on court. We played a round robin format within two pools. We also managed a Singles Plate. The matches in the two pools were very interesting to watch, especially as two players had definitely upped their game this year and achieved some fantastic wins during the round robin. Most notably Maddy Raynor beat defending champion Tessa Mills 11-5 while U23 champion Louise Mathias beat Kathleen Briedenhann 11-5: absolutely superb games to watch. The semi-finals saw Maddy against Kathleen, a gripping match of strength and stamina with an end result of 11-8 to Kathleen. In the other semi-final Louise was pitted against Tessa, another truly gripping match, with Louise victorious 11-9. The Singles final saw Kathleen play a newcomer in her first National Final: Louise Mathias. It was best of 3 to 15 and a fantastic match to watch, with both ladies showcasing shots with great strength and interesting angles. Despite a tremendous effort from Louise, Kathleen displayed her experience and skills to win the match 15-3, 15-5. An impressive show from both ladies. Many congratulations to Kathleen on her win.

The Singles Plate was again very interesting to watch and saw Cassi Henderson beat Emily O’Malley 11-1, while Lottie Simpson beat Aiysha Alli 11-5. The Plate Final was therefore between friends and partners, Cassi and Lottie from Cambridge University. As it was a tough match to play after all the singles that morning, the final was played as best of 3 to 11. Both ladies played so well, with Cassi eventually beating Lottie 11-3, 11-1.

The Doubles was also played as a round robin with just 4 pairs. After a hard day’s fives the Doubles final was once again going to be a battle of strength, stamina and sheer determination, as it was between stalwart finalists Steel & Raynor and Mills & Briedenhann! This year there was a new feeling in the air for Steel & Raynor: they have been training regularly with their club (Exeter Rugby Fives Club – at Blundell’s) and they seemed to have the edge on Mills & Briedenhann. The first game was more or less point for point and then Steel & Raynor started to edge ahead, each playing long corner shots, utilising their skills in hitting the ball close to the wall. Mills & Briedenhann played their beautiful low shots and, with Tessa’s strong right arm, gave great chase in the first game, but it ended with a score in favour of Steel & Raynor 15-13. After a few pieces of dried mango and Haribo Steel & Raynor were ready for a second battle against Mills & Briedenhann. Whether it was the sheer determination and will from Steel & Raynor or their new and improved strength and skills on court, the game was already in their favour after just a few points. Mills & Briedenhann began to tire and hit the ball under the bar, so Steel & Raynor took advantage of this, winning the Ladies’ National Doubles with a second game score of 15-7. They were absolutely elated at finally winning the title after so many years. Many congratulations go to them. 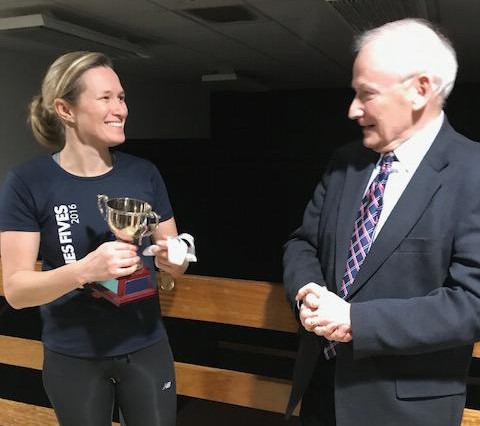 Singles champion for the 4th time 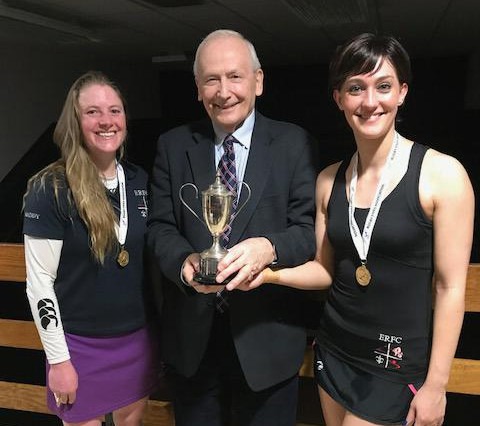 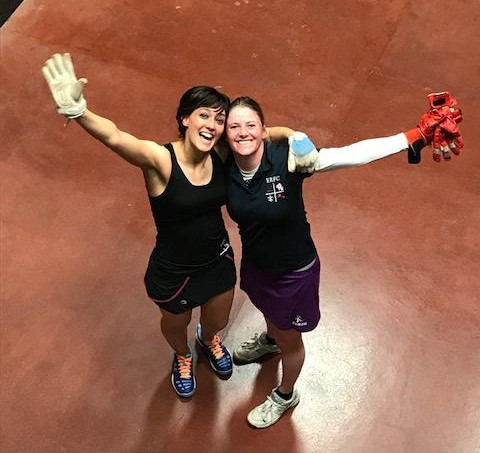