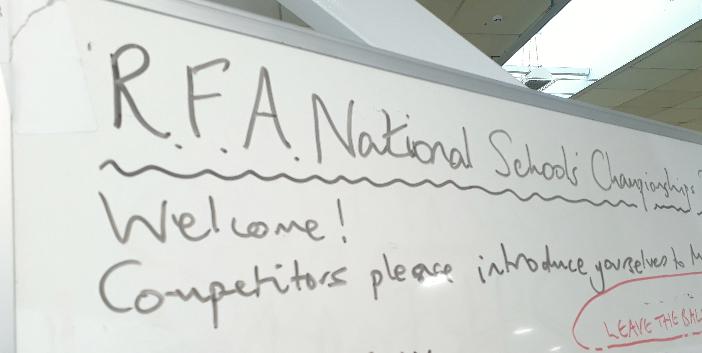 The eccentricities of dates (Easter and school terms/holidays) seem to have affected the size (but not the quality) of this year’s entry, and just 100 competitors from 14 schools in all were included in the draws. There was, however, a very high standard of play, with some memorable fives at all levels, and the majority of schools were represented in finals at some level. Happily the friendships and sportsmanship which characterise Fives tournaments were as much in evidence as ever; a clear example was set in the closing stages of a tough U14 doubles final when players from both pairs were seen to call a marginal “not up” against themselves.

The Open singles tournament allowed two players from each initial group into the main draw, with a further opportunity for those losing the first match there to progress in the Plate. This meant that play in both tournaments was of the highest standard, but Tom Kidner stood out, making the defence of his title look remarkably easy by the expedient of taking the ball early and hitting punishing length and width. No game in the singles went to three games, although Isaac Hudis (SPS) pushed third seed Addie Chai of Blundell’s all the way to 11-9 12-10. And Addie’s partner James Maclaurin, playing against Alex Cochrane from Alleyn’s, took the plate after a monumental three-game final, having previously also had two 16-14 wins against Paulines Hudis and Davies. In the doubles Winchester I came through as champions, defeating Whitgift fairly comfortably, leaving Cameron Low second-best to Kidner for the second time in the day, after an impressive week’s fives..

The Colts’ singles event was remarkable for being won, and fairly comfortably too, by Gwydion Wiseman from Alleyn’s. Not unexpected, as he had won in the West of England, but special because he is still an Under 14 player, and this was a first. Gwydion stood out as an accomplished player with a strong all-round game. Had he not been there, the competition would have been very tight, as all the other quarter- and semi-finals went to three games: Thomas Peel from Edinburgh Academy and Paulines Teddy Monro-Davies and Louis Odgers all edged out the Wykehamists in the quarters, and then Louis outlasted his doubles partner to qualify for the final. The plate finals both went to three, with Daniel Troup from the Academy finishing stronger against Ben Burgess of Tonbridge. In the doubles Winchester I met St Paul’s I in the final, and the result went the way of the Paulines, who had also just had the edge in the singles.

The U14 tournament arrives on the third day and proved extremely enjoyable for all who took part. It was really “no contest” with Wiseman, defeated finalist last year, full of confidence and possessing all the skills needed. Much credit goes to those who pushed him hard and will be working hard to catch up in the years to come, most notably Massimo Campanale from Tonbridge. It was great to welcome players from the newly formed City of Durham club, and most encouraging for them that Oscar McIntyre went away with victory in both singles and doubles plates, playing with Simon Beattie in the latter. The main doubles final was a splendid contest, with Tonbridge just a little stronger than the Alleyn’s pair.

Many thanks to all involved in organisation and support, especially Ian Jackson, who again shouldered the burden of managing the U14 events, to parents, fan clubs, and some extremely devoted staff without whom the school players would not be developing such an obvious love of the game and skilful enjoyment. Next year the tournament will begin on April 1st (no fooling!). 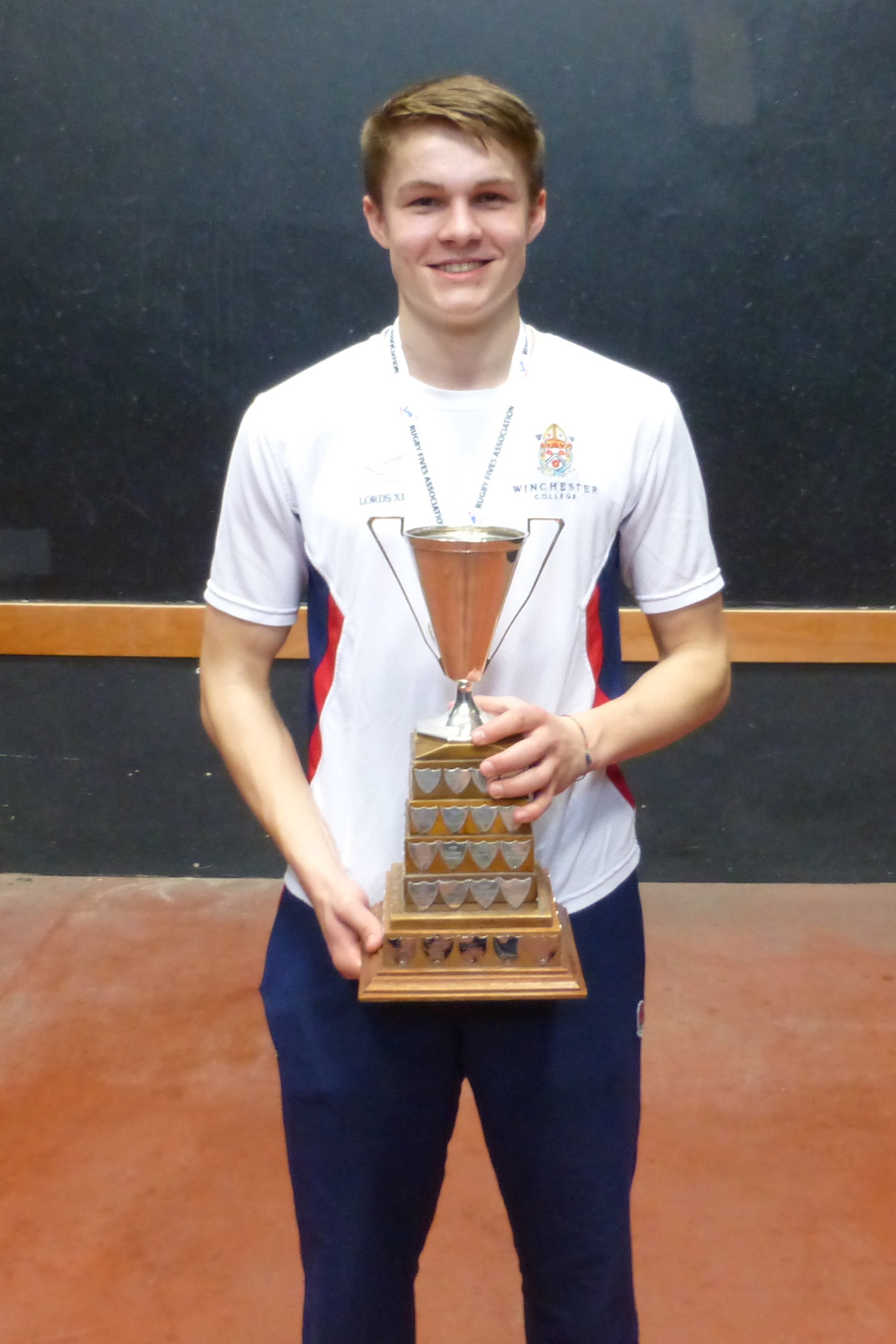 Two-time Winner of the Jesters Cup for Open Singles 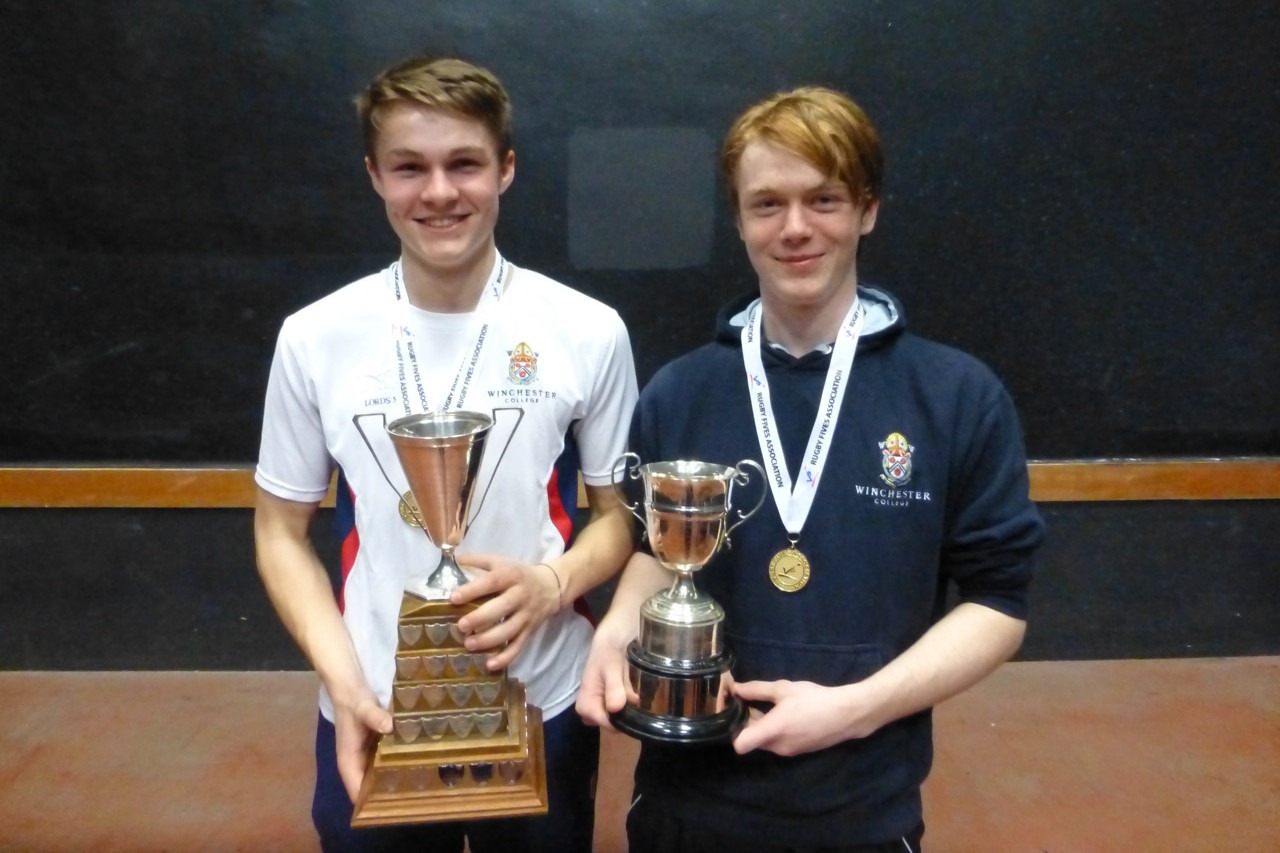 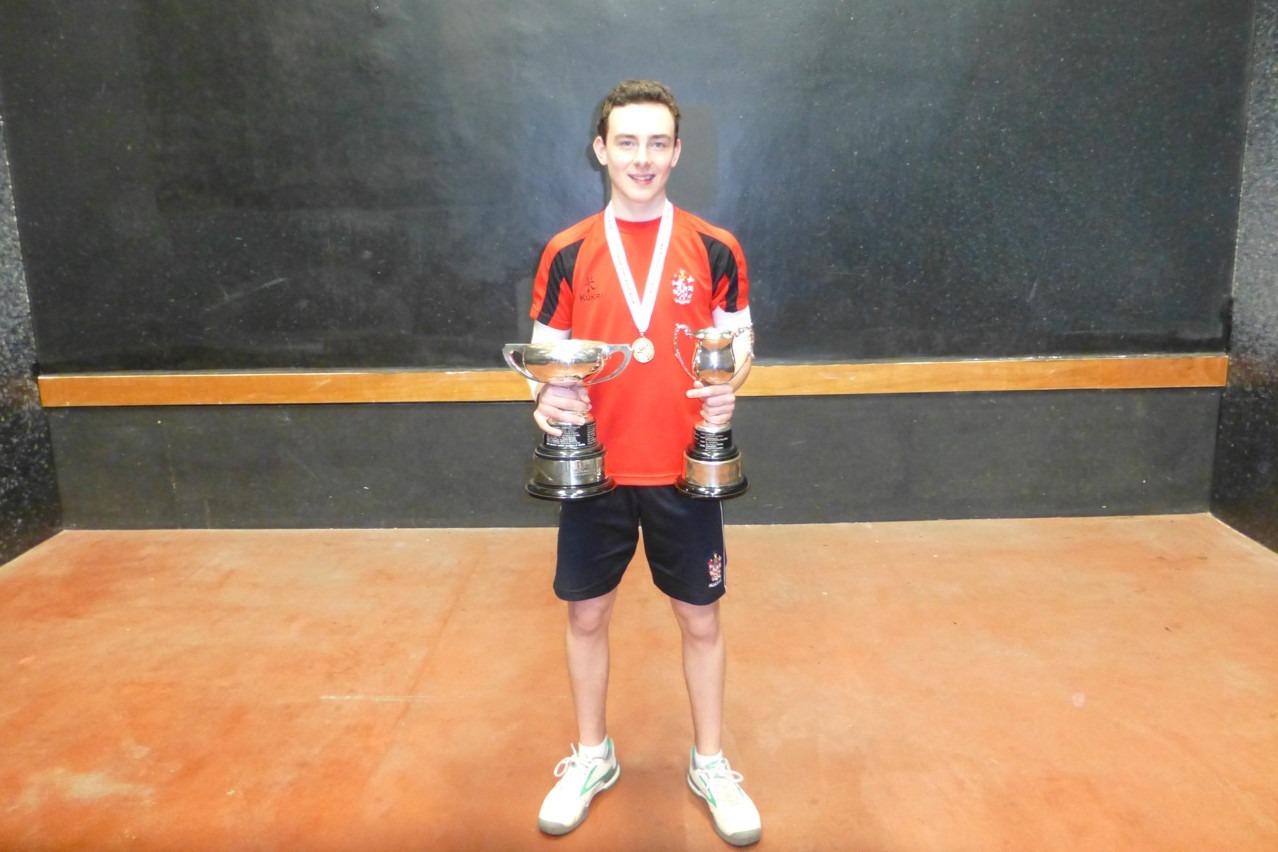 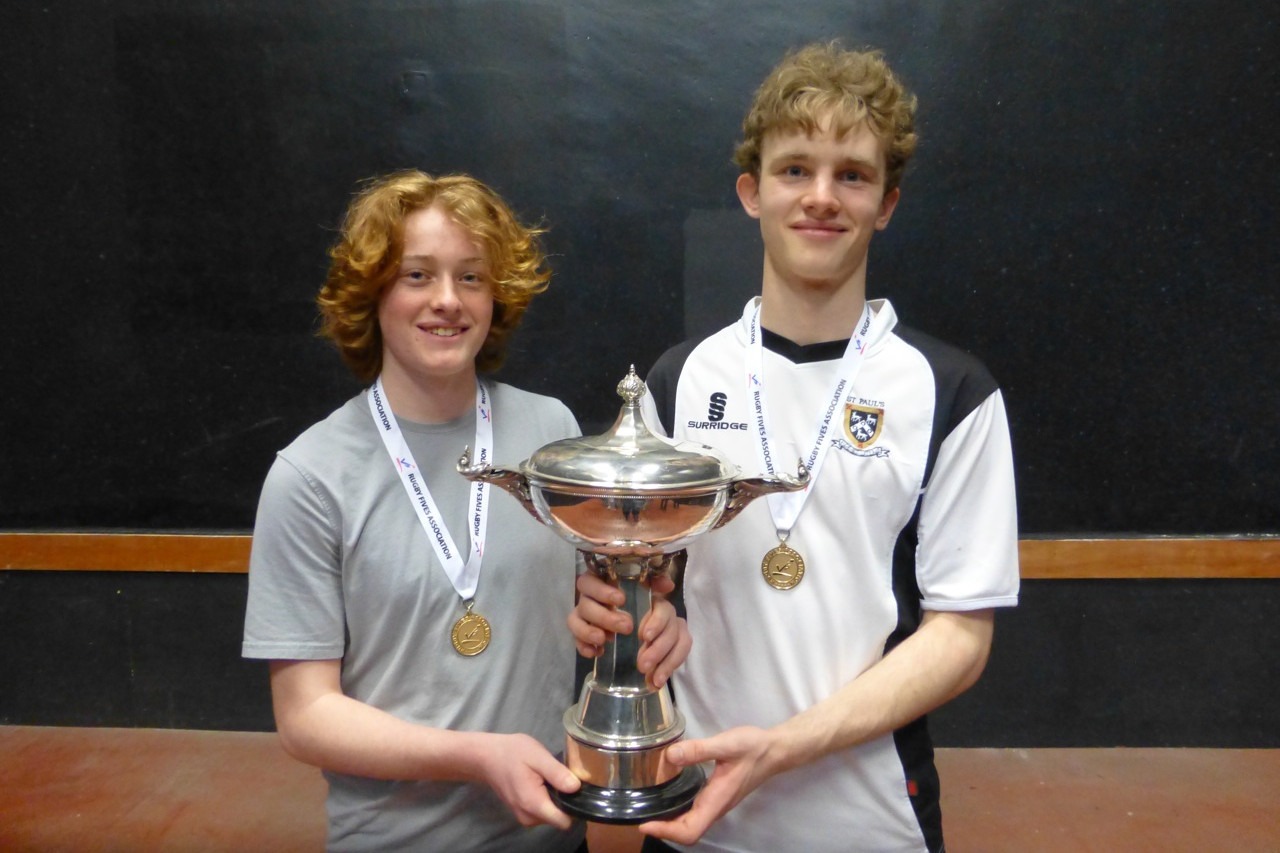 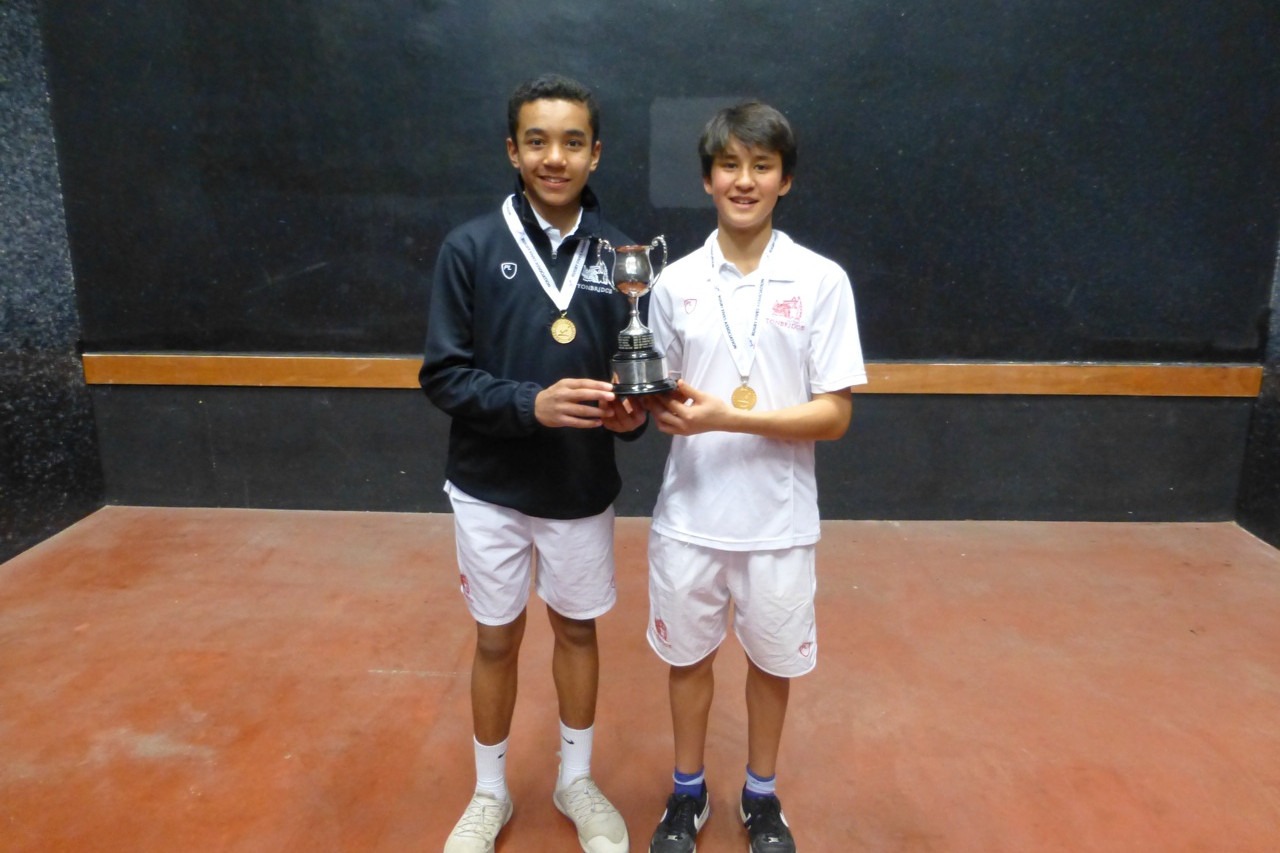 U14 Doubles champions from Tonbridge