STOP PRESS: There were victories for players from Winchester College and Alleyn’s School in the U18s and the U16s respectively. Players from 9 schools took part.

The Organisers report: The tournament was held at the Sherborne courts over a pleasantly dry and sometimes sunny weekend and the Fives drew plenty of interest from many and varied supporters, including at one point a group from the Junior School. Though the overall entry was down on 2017, particularly at Under 18 level, the fast courts produced some excellent action. We are once again most grateful to Sherborne School and particularly to Nick Scorer for the use of the courts and for Nick’s unfailing cooperation and enthusiasm.

In the Senior event, whilst Winchester came away with the spoils in both Singles and Doubles, St. Paul’s and Blundell’s were rewarded with runners-up medals and the Doubles Plate, and Marlborough with the Singles Plate.

In the main Singles three of the top four seeds came through to the semi-finals, with Kidner (Winchester), the number one seed, dropping only six points en route. The other semi-final player was fifth seed Jackson (St Paul’s) who overcame fourth seed Cochrane (Alleyn’s) in a tight match, 11-6, 11-6 with some long rallies.  The semi-finals saw a further upset as third seed Chai (Blundell’s) showed steadiness and speed around the court to overcome number two seed Cheveley (St Paul’s), thus setting up a Kidner vs. Chai final.  Remarkably no matches had run to a third game at this point  The final started badly for Kidner, who could not find his rhythm and lost the first game 4-11 but composed himself to deliver some fine shots to take the second and third games, in spite of Chai fighting back at every opportunity.  In the Plate, Rigg of Marlborough played consistently to overcome Skoczylas of St Paul’s.

The U18 Doubles was a little depleted by Alleyn’s being unable to take part and Winchester and Blundell’s fielding just a single pair each, resulting in eight pairs in the contest. However the Fives was no less hard fought and Winchester showed their class by losing only four points in the four games en route to the final.  St Paul’s I experienced more resistance on their road to the final stage, including an entertaining and hard hitting encounter with Blundell’s.  In the final it was a run-away first game of 11-1 for Winchester to go ahead but St Paul’s ran them close in the second 12-10.  In the Plate, St Pauls II achieved three clear victories to take the winners’ medals.

In the Colts (U16) events Alleyn’s did the double but not without having to overcome some stiff competition, particularly from the Winchester contingent. In the Singles the four top seeds of Winchester (Percival), Sherborne (Mercer), St. Paul’s (Odgers) and Alleyn’s (Wiseman) all progressed to the semi-finals, with only Percival suffering a scare with an exciting 3-gamer in the quarter-finals against Ali from Derby Moor.  He was also pressed hard by Mercer in the semis and perhaps these exertions told somewhat in the final against Wiseman.  This was a superb contest, with the first game going to 9-9 before Wiseman edged it with some powerful hitting.  In the second game with Percival tiring, Wiseman pushed on to win in the end comfortably, a well deserved champion, and the first Alleyn’s winner of this event for 10 years.  Ames from Blundell’s, who had only narrowly lost his first match in the main competition, went on to win the Plate by beating Redfern from Winchester in the final.

The Colts Doubles produced some more excellent fives. The semi-finals took a familiar look with pairs from Winchester, Sherborne, St. Paul’s, and Alleyn’s making the semi-finals, i.e. the same four schools as in the Singles semis.  This time it was Sherborne who had the tough earlier matches with a 16-15 win over St. Paul’s II, and then a good quarter-final win against Blundell’s I.  There was another tense first round match, with Tonbridge I also achieving a 16-15 victory, this time over Winchester II.  Sherborne pressed Winchester I hard in their semi-final but the top seeds showed their class to come through 11-3, 11-9.  As expected, the final was a close encounter with Winchester (Percival & Fraser) taking the early lead.  But Alleyn’s (Wiseman & Scott) started to take control with Wiseman dominating and Scott playing an important supporting role.  After many exciting rallies the Alleyn’s pair won through by 11-9, 11-7, to put their school name on the trophy for the first time since 1978!

The Doubles Plate was played as a round-robin amongst the five pairs. The event was remarkable for the number of close matches, with all pairs acquitting themselves well.  Finally St. Paul’s II (Jobson & Monro-Davies) won through, edging out Winchester II (Hawkey & Redfern) into 2nd place.  Winchester were therefore unlucky in coming a close second in all four Colts events, but they took their defeats with the good sportsmanship that was evident in all the matches played over the weekend. 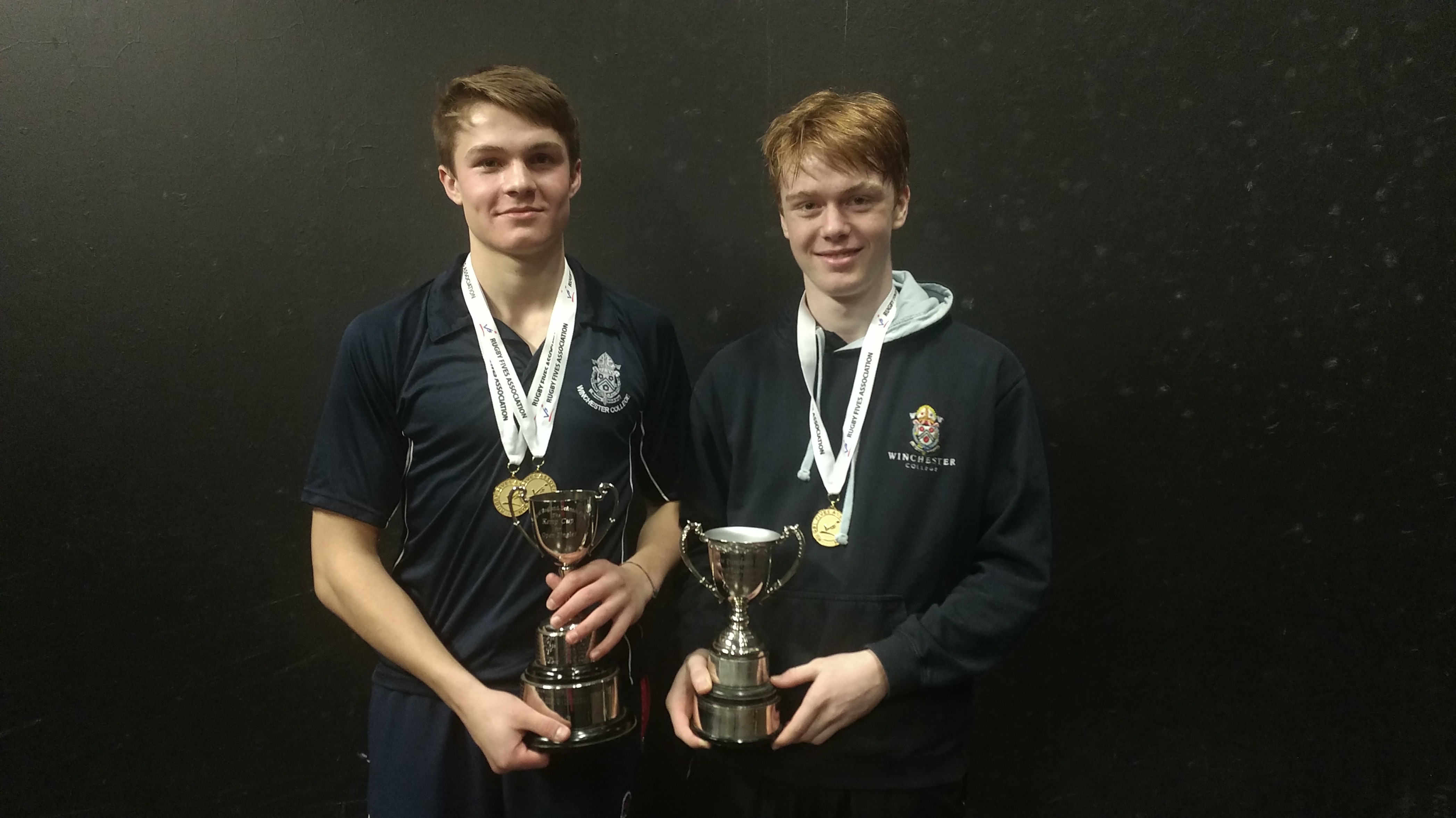 The U18 champions from Winchester College 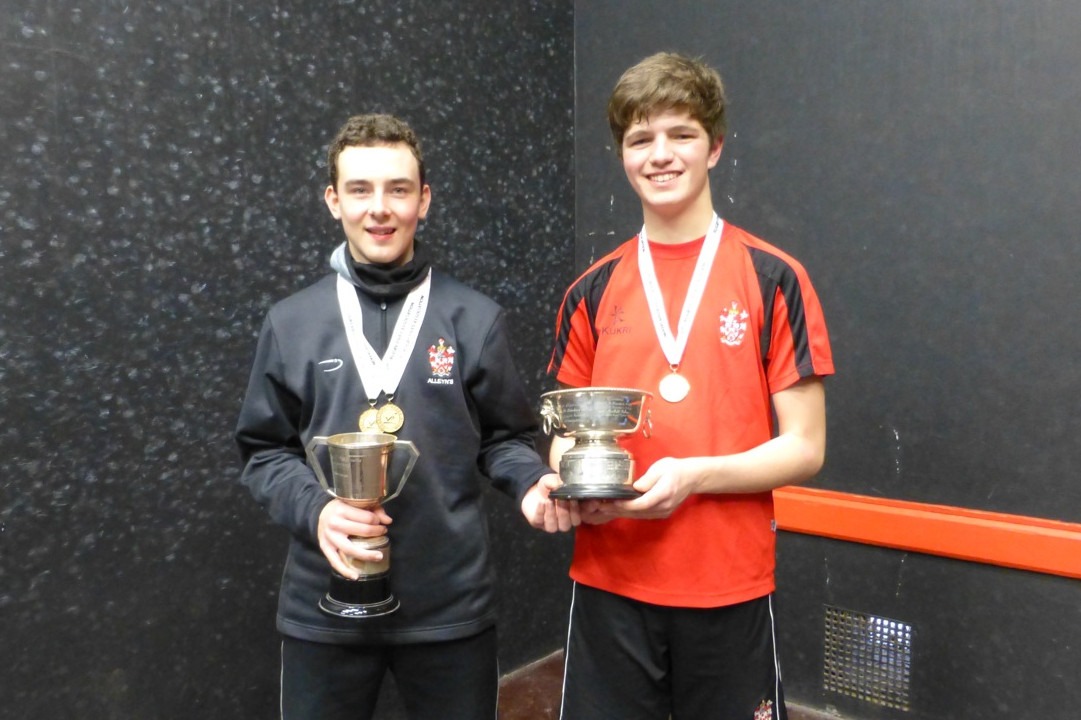 The Colts champions from Alleyn’s School 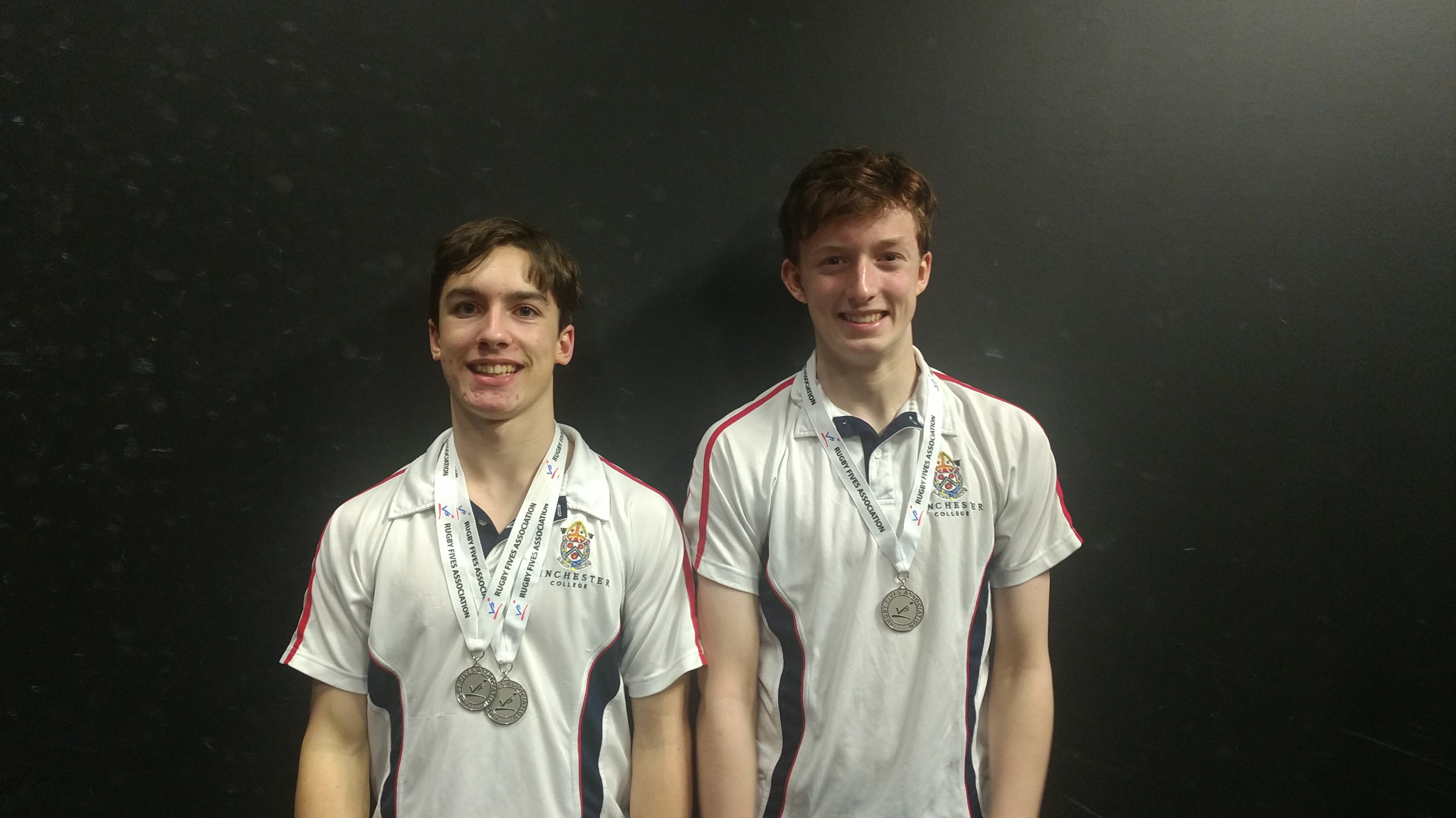