Some 40 girls from 6 different schools contested this season’s delayed National Schools Girls’ Championships at Alleyn’s School. With titles in four different age groups being contested as usual there were 16 competitions, main and plate, going on at the same time on the four courts, a complex operation which organiser Alex Smith ran with aplomb, ably assisted by Rob Ody, Richie Murby and Hamish Buchanan.

The small Under 18 competition ran smoothly and was the first to be completed, with Martha Nugent, now playing her fives with the Edward Alleyn Club, successfully defending the Singles title she won two years ago. In the Doubles Alleyn’s fielded Katie Innes & Lucy Arie as their first pair. Their final with two players from Highgate School looked anything but straightforward as the score fluctuated first in favour of one side and then the other, but eventually the home pair’s greater experience of Rugby Fives paid off in a match that ended 15-13.

The Under 16 competition involved a dozen players from five different schools. It was clear from the outset that the player to beat in the Singles was Camille Beattie from the City of Durham Fives Club. She dropped just two points in storming to victory, giving the Durham club its first national champion. Camille had no partner for the main Doubles, so it was an opportunity for the Edinburgh Academy pair of Cecily Millar & Rosa Ogilvie to take the title in a tense and high quality final 15-12 against the Alleyn’s first pair of Anna Chance & Claudia Davey.

Meanwhile on the front courts two larger competitions were progressing at a fast rate, aided by the application of ‘rally points’, i.e. every rally counts for a point.  In the U14s Rosa Ogilvie of Edinburgh Academy grew in strength and confidence as the day progressed and came out a comfortable winner of the Singles. Having played in the U16 Doubles Rosa took no part in the U14 Doubles, which went the way of the Alleyn’s pair, Emily Erdmeier & Annie Guo, at the expense of the Stamford Schools pair, Harriet Denton & Amelia Duncan.

If there were any tired bodies at the end of the day it was among the U13s, who played round robins in Singles and Doubles and then engaged in a knock-out, where matches were increasingly close. The pick of the players were Anna Bailey and Annabelle McAllister, who met in the final of both Singles and Doubles, striking the final shots of the day in a superb 15-13 Doubles final.

Thanks go to Alleyn’s and Fives master Rob Ody for hosting the event; to Alex Smith and his various helpers; to supportive parents, teachers and coaches, for some of whom this was a first experience of the game — let us hope they liked what they saw on and off court! And above all, thanks to the players who committed to this special event — they did themselves proud. 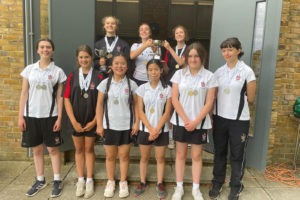 Plenty to celebrate for Alleyn’s 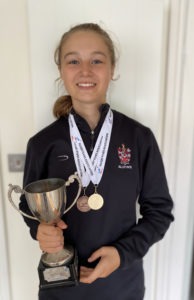 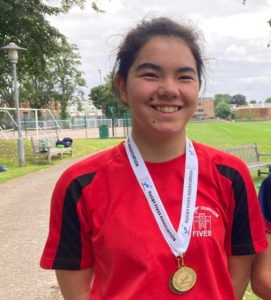 National U16 Champion from the City of Durham Club 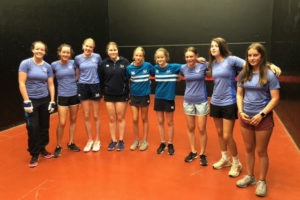 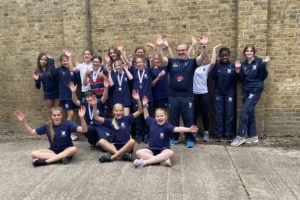