Spectators were treated to some wonderful performances on both day’s at this year’s championships in both the singles and doubles competitions.

The match of the second round and the first seeding upset was Antony Goodwin beating Hamish Buchanan in a three-game epic. All credit to Anthony’s fine retrieving ability to see him over the line. An equally enthralling match was also taking place in the top half between Ed Hatton (Old Blues) and Alex Rew, with Alex again beating the seeded Ed in three. Other matches went to the seeded players, who all won in two. Sam Russell certainly gave ex-winner Matt Cavanagh (OBMs) and current National Veterans Champion a very good match, showing again his increasing improvement at singles. Will Ellison wasn’t giving anything away as usual, however, though newcomer to the SW tournament Alfred Ainsworth (Old Tonbridgians) put in a very creditable performance to give Will a good warm-up. In the bottom half of the draw Alfred’s school coach and doubles partner Ian Jackson (ex-BUSF Doubles winner) came up against a very impressive Ben Beltrami and, despite losing to low scores, equally played well. Even though Dave Butler (Durham University) wasn’t feeling too well he certainly firstly controlled play to defeat Jim Hughes, then Jim’s partner, Alex Rew, to earn his place in the semi’s. Ollie Arnold (Bristol University) showed what an exciting singles prospect he is becoming, firstly dispatching Craig Baxter quickly, then providing Will with plenty of rallies to think about. Unfortunately, with Will’s experience and tremendous attacking shots, Ollie now realises areas of his game he needs to develop in order to break into the elite singles group. Another seed upset took place in the quarter-finals where Charlie Brooks beat third seed Matt Cavanagh, showing he has now fully recovered from a knee injury that kept him out of the game last year. Meanwhile Ben Beltrami booked his place in the semi by defeating a very tired looking Anthony Goodwin convincingly.

In the semi-finals Dave Butler did his best to attack Will whenever he could; however, with the combination of Will being able to increase the pace and Dave looking under the weather it was a comfortable win for Will. Quite the opposite in the other semi, though, as Charlie was yet again to upset the seeding and beat Ben, the number two seed, in a three-game battle. Initially Ben showed the form that has produced him his well earned high ranking, winning the first game, but then Charlie slowly produced his old form and winning shots and one could see the energy drain from a young player as the match went into a third and deciding game, which Charlie controlled excellently and, surprisingly, won to love after many hard fought rallies. So, a mixed day of fortunes on the singles front and a new opponent for Will in his ninth consecutive final, having previously won on five occasions, but the outcome had to wait until the Sunday morning.

The doubles, as usual started on the Saturday after the second round of the singles, with some interesting new parings and the most significant question being asked: Could any of them give our National Doubles Champions Charlie Brooks & Will Ellison a run for their money? A first round three-gamer saw young guns Craig Baxter and Lewis Keates defeat mixed pairing Dan Hill & Alexandra Steel 12-10 in the third. Another close match was that where Wayne Enstone & Ed Hatton beat Richard Christie & Aaron Wheatley in two games. An interesting new pairing of Anthony Goodwin & Sam Russell proved too powerful for Alfred Ainsworth & Ian Jackson. In another three-gamer Nick Geere & Jack Turner (ex-Blundell’s School Captain) were able to blast past Veteran Keith Kennerley & Vintage Brian Kirk (Derby Moor). Unfortunately, that success was short-lived as they were beaten by Ben Beltrami & Hamish Buchanan, who quickly won through to the quarter-final. Equally Charlie & Will moved through to the quarters after giving Craig & Lewis a master class – but what wonderful experience for young players to gain!

A tournament organiser’s nightmare can be having too many three-game matches, so for the organiser to be involved in the longest of those matches is the reason he will be banned from playing in future years to come — maybe! From all accounts the match was entertaining, with Alex Rew & Jim Hughes winning deservedly 12-10, after being match ball down in the third. That put them through to the semi-finals, but unfortunately that semi was quickly over, with Charlie & Will showing true champions’ form. In the lower half Ollie Arnold & Dave Butler had too much fire power for Anthony & Sam. which set up them up to play Ben & Hamish. This contest also proved to be a quick one, with Ollie hitting the ball with power from the left that hasn’t been seen since our RFA treasurer-elect Dave Parlby performed here some years ago —  happy memories! Ben & Hamish rallied in the second;  however, Ollie and Dave proved just too good on the day. So this set up for an interesting Sunday, with the two singles finalists playing each other before then playing together in the doubles final — very interesting.

In between the main tournaments the Plates were being contested. In the Singles Richard Christie and Ian Jackson had a hard fought semi which Ian eventually edged to win to 8, while on the other side of the draw Alfred Ainsworth was consistently beating his opponents to 2. The final was then between the two Tonbridge club players. Ian actually made the better start; however, as we coaches know we eventually pay the penalty by developing our players to a standard above ourselves and such was the case here, Ian being very proud of his one time pupil who won to 6.

In the Doubles Plate Richard Christie & Aaron Wheatley gave Ian Jackson & Alfred Ainsworth their toughest challenge in the semi, getting 10 points; however, Brian Kirk & Keith Kennerley, whilst playing well and winning many rallies, couldn’t break down the defence of the eventual winners, Ian and Alfred, who won to love!

A long day for all. and so we were ready for a much deserved drink and meal at our usual venue, the Butterleigh Inn. A special mention and best wishes were given to Will, who is to marry Nicky in two weeks and organised the wedding to fit in with this championship, and to Ed and Hazel, whose wedding is in four weeks’ time.

The finals on Sunday were a real treat for everyone to watch, being action-packed. The singles final was Charlie Brooks’s first for quite some time, but with his recent National Doubles success he certainly looked very composed. Will was on form, as proven the previous day, and right from the start of the match it was clear that he was not going to give up his trophy without a fight. At 4-3 to Will, Charlie was proving to be a very worthy opponent and a real threat. After several changes at this point Will then began to move into another gear and, whilst not dominating the rallies, he slowly moved the score on to game ball 3. As we had witnessed throughout the rallies Charlie was not willing to let the game go without a final burst of effort and at 10-5 he really was still causing Will to work hard. Will eventually produced the quality shots to close out the game and win the first game to 5. The second game followed a similar pattern of play in terms of Charlie staying with Will in rallies up to 4 -2; then we saw Will slowly moving the score onto 8-2. At 8-3 Charlie produced some excellent shots and it seemed possible he could get back into the match; however, Will seemed to sense the danger and, as he does, produced his own wonder shots. This possibly helped them both save energy for the doubles final to be played after this battle royal, with Will winning to 4. Amidst much of the brilliant play we witnessed it is worth mentioning how both players called shots down which one might well have thought were up, but such is the spirit of fairness in which these top players play the game; all credit to them — it is wonderful to witness. Well done to both players, great role models.

In the doubles final, Ollie Arnold continued, as in previous matches, to rocket the ball around the court for him & Dave to take an initial lead, but fortunately for Charlie & Will they managed to weather the storm and throughout many ferocious hitting rallies to move ahead taking a 5-1 lead. At 5-3 Ollie & Dave looked as though they had halted Charlie & Will’s momentum only for the score to quickly switch back to 10-3 in Charlie & Will’s favour and then a quick end, 11-3. Ollie & Dave made a super start to the second game, with more controlled hitting bringing them greater success,  moving them into a 4-0 lead, which left us spectators thinking this match could be going to three games. Just as in the first game, though, Will & Charlie slowly started to impose their own strategy and once again moved to level the score and then proceeded, as in the first game, to dominate rallies. They won the second game to 4, and with it the match. They are a truly great partnership and it will undoubtedly take another brilliantly gifted pair to take this trophy off them. It was an excellent final to watch, with many exciting rallies and numerous winning shots, so well done to all players.

Whilst the main finals were taking place there were six players up for the challenge of the Sunday American Doubles competition. This year the players chose to organise a round robin, playing two games against each pair, the winning pair the one posting the most points. As usual, it was very closely contested: the winners were Keith Kennerley partnered with Alfred Ainsworth: they won all their games, so worthy winners.

To conclude proceedings the usual prize-giving of the local Devon Dartington Glassware took place before players departed to as far away as Edinburgh. Well done to all for making it another enjoyable weekend.

Finally, it is a privilege for me to write this report after witnessing yet again Fives of the highest standard. A massive thanks to Will and Charlie for supporting the Championship as current National Champions and providing us with such a wonderful standard of play over the whole weekend. Also thanks go to: Chris H-D for booking me the facilities of Blundell’s School and dealing with last-minute maintenance issues; to the school for its continuing support of Fives; to Tim Lewis for booking the Saturday meal and his on-the-day support in general — we wish him all the best with his imminent second knee replacement; to Lesley on the catering side; and lastly to Nigel Gordon for his generous and continued sponsorship of the event with his G6 balls, which made for some great performances and exciting play.

Do think about joining us next year for a fun weekend of fives;  all are welcome! 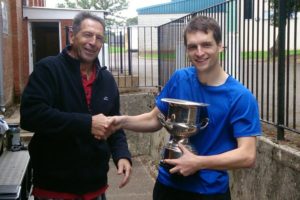 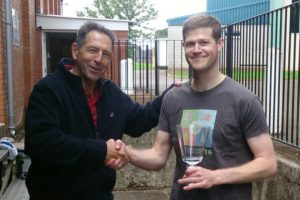 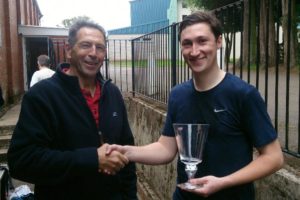 Plate winner Alfred A. from the Old Tonbridgians 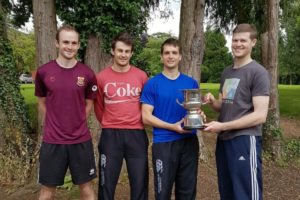 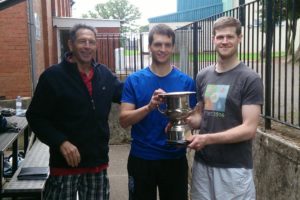 Champions again – Will and Charlie 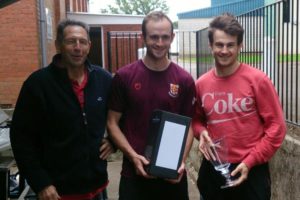 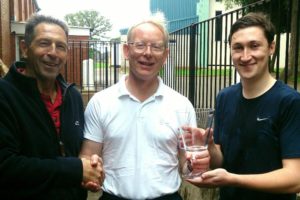 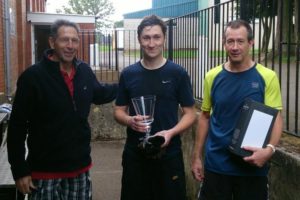