STOP PRESS
While we wait for a full report on the weekend’s events from organiser Wayne Enstone, we have pleasure in publishing the results from the 2017 South West Open Championships. As you’ll see, some very familiar names won the silverware, with Dan Tristao beating Will Ellison to take the singles championship, before Will & Dan Grant beat Dan T & Gareth Price to win the doubles title.

Spectators, including Geordie (Dan Grant’s lovely dog), were treated to some exhilarating and exceptional performances on both days at this year’s championships. The top three seeds have certainly taken fives to another level this season, and I am taking this opportunity to say what a pleasure it is for me to see so many front-court shots being played; it has certainly added a new dimension to our wonderful game. I can hear Fred Beswick saying ‘Great shot’, being a master and advocate of the drop shot himself! On with the report:

Saturday began with young Addie Chai (Blundell’s), who was competing in his first senior tournament, beating Bhaswar Baral in two good games, while Ed Hatton warmed up by beating local Keith Kennerley in two hard fought games. In other first round games, Alexandra Steel (Old Blundellian) gave a very good account of herself by pushing Ashley Hill (Derby Moor) in many rallies, but losing in two. Vintage and local player Stuart Watson began his day with a boxing session, but unfortunately this didn’t deter Rob Whitehorn (Derby Moor) from winning the match, hitting some thunderbolt winners in the process.

In the second round, Maddy Raynor (Old Blundellian) had a very entertaining match with Dan Tristao, Dan winning in two. Henry Jefferies showed how he is developing into a fine player by dispatching a power-hitting Gareth Price in two. Similarly, Julian Aquilina showed great attack and movement to keep Rob Whitehorn down to win in two games. Anthony Goodwin came up against an in-form Theo Parker, who managed to close the second game out to nine, when a third was looking possible. Ed Hatton did have many fine rallies with Will Ellison, but Will produced his outlandish winners to move into the quarters.

In the top half of the draw, while Henry Jefferies produced some excellent shots and played very well, Dan Tristao remained calm and produced equally deceptive shots to win in two. He had to wait quite some time to know who his semi-final opponent would be, as David Butler had to work extremely hard against an ever-improving Julian Aquilina in two very closely fought games.

In the lower half, Dan Grant frustrated Ollie Arnold by producing so many winning serves after Ollie had fought hard to win the previous rally; and, with Dan’s unreadable shots, the match ended quite quickly. An even quicker match, unfortunately, saw Theo Parker have to retire at 3-all with Will in their first game after turning his ankle.

So, the semis were set according to seeding, and Dan and Dave had a wonderful first game, with Dave chasing around the court, picking up many conceivable winners. However, Dan’s excellent control and front court play eventually won the game and match. In the lower half, Dan and Will produced what I feel must have been the best ever semi, with Will seeming set to win the first game at 9-3 up; however, Dan served a marvellous number of winners to claw back and miraculously win the first to 9. In the second, Will’s determination to keep Dan down was clear to see and rewarded him with an 11-3 win. The third, again, was hard to call, with both players taking their fives to another, absolutely breathtaking, level, playing magnificent shots throughout, Will taking it eventually 11-6. One had to feel for Dan, whose wonderful shot play I predict will win him an open championship in the near future. So, Will would be defending his championship against Dan Tristao in yet another final, the outcome of which would be decided on the Sunday morning.

The doubles, as usual, started on the Saturday after the second round of the singles, with some interesting new parings and the most significant question being asked, could any of them give Will Ellison & Dan Grant a run for their money? A first round three-gamer saw young guns Lewis Keates and our youngest competitor Vish Singh (Derby Moor) win against local ladies Maddy Raynor & Alexandra Steel.

In the bottom half of the draw local vintage pair Tim Lewis & Stuart Watson had many entertaining rallies with Stuart Kirby (National Vintage Champ) and power hitting Ashley Hill (after six years in HMS), champ & youth winning through in two games. Quarter-final matches went according to seeding, which set up for Will & Dan against Julian & Henry in the top half and Ollie & Dave taking on a very impressive Gareth & Dan pairing, Considering these matches were being played after some exhausting singles play earlier, the standard of rallies was exceptional — all credit to the four pairs. Will & Dan never really looked in trouble despite being pushed to play at their best especially in the first game and eventually finished the match winning in two games. Similarly, Gareth & Dan were under pressure during many rallies with Ollie hitting some ferocious left-handers and Dave attacking from the right but Gareth & Dan matched them with their own fine winners to win the match in two games.

So this set up for an interesting Sunday with the two singles finalists playing each other before then playing against each other in the doubles final.

In between the main tournaments, the Plates were being contested. In the singles Anthony Goodwin won through to the final comfortably beating Maddy Raynor and Bhaswar Baral, Bhaswar being taken all the way earlier by Keith Kennerley. In the lower half of the draw Lewis Keates also reached the final by firstly having a battle with now local player Nick Geere, then comfortably beating a rather tired Addie Chai, who now knows what a senior tournament is all about. Even though Lewis made a contest of it Anthony had too much energy and experience and won the final 15-9.

In the doubles, with six pairs involved a round robin competition took place, 3 pairs in each pool. Pool A was won by Ashley Hill & Vish Singh and Pool B by Brian Kirk & Lewis Keates. Ashley & Vish being a right and left hand partnership took full advantage and beat Brian & Lewis with some fine doubles play, 15-9.

A long and enjoyable day had been had by all, and so we were ready for a much deserved drink and meal at our usual social venue, the Butterleigh Inn. A special mention should go to Kanika Baral, five year old daughter of Bhaswar and Uma, who attended her first of hopefully many social fives occasions — never too young to recruit, Alexandra Steel was showing us how to do it. We have the gloves ready for next year! I must also mention ‘Geordie’, who enjoyed his evening with the three dogs at the Inn!

The finals on Sunday were action-packed. The singles final was virtually three matches in one. Game one going to Dan after a great deal of high energy/intensity and high risk play by both players, especially Dan’s exceptional drop shot play, wonderful to witness. In the second game the first point was won after 10 rallies. Will then played many fine winning shots to turn the tables and, helped by errors from Dan, he eventually won the game with room to spare. At 2-all in the third game and each player playing some wonder shots that the other returned time and time again, eventually Dan started to gain the advantage and closed the game out to two. Well done also to both players for declaring balls down, whilst we spectators thought them up — fairness personified.

In the doubles final, Will & Dan set off at a blistering pace, with Gareth & Dan matching them for most of the early rallies but Will & Dan slowly edged ahead to finish the game off 11 to 4. In the second game it was Gareth who moved him and Dan to a 7-2 lead. Unfortunately, against anyone else their lead would have been more than enough to close out the game but Will & Dan had other ideas and shots to deny them, pulling back to seven all only for Gareth & Dan to move ahead 9 to 7. The intensity of play was such that before the scorer could record the score Will & Dan G had won 11-9 and the final. Marvellous fives.

In between the main finals there were four players up for the challenge of the Sunday American Doubles competition. This year the players chose to play best of three to 15 points. Julian Aquilina and Nick Geere played against Addie Chai and Keith Kennerley and whilst both games seemed to last for ever, Julian and Nick managed a win in two.

To conclude proceedings the usual trophies to winners and prize giving of the local Devon Dartington Glassware took place.

Finally, it is once again a privilege and pleasure for me to write this report after witnessing yet again fives of the highest standard. A massive thanks to Dan and Will for supporting the Championship as current National Champions and providing us with such a wonderful standard of play over the weekend. Also, thanks go to: Chris H-D for booking me the facilities of Blundell’s School and the school’s continuing support of fives in general; to Tim Lewis for booking the Saturday meal and his on the day support in general, to Lesley on the catering side and lastly to Nigel Gordon for his generous and continued Sponsorship of his G6 balls, which made for some great performances and wonderful play.

Do think about joining us next year for a fun weekend of fives.

Photos at the end of this report 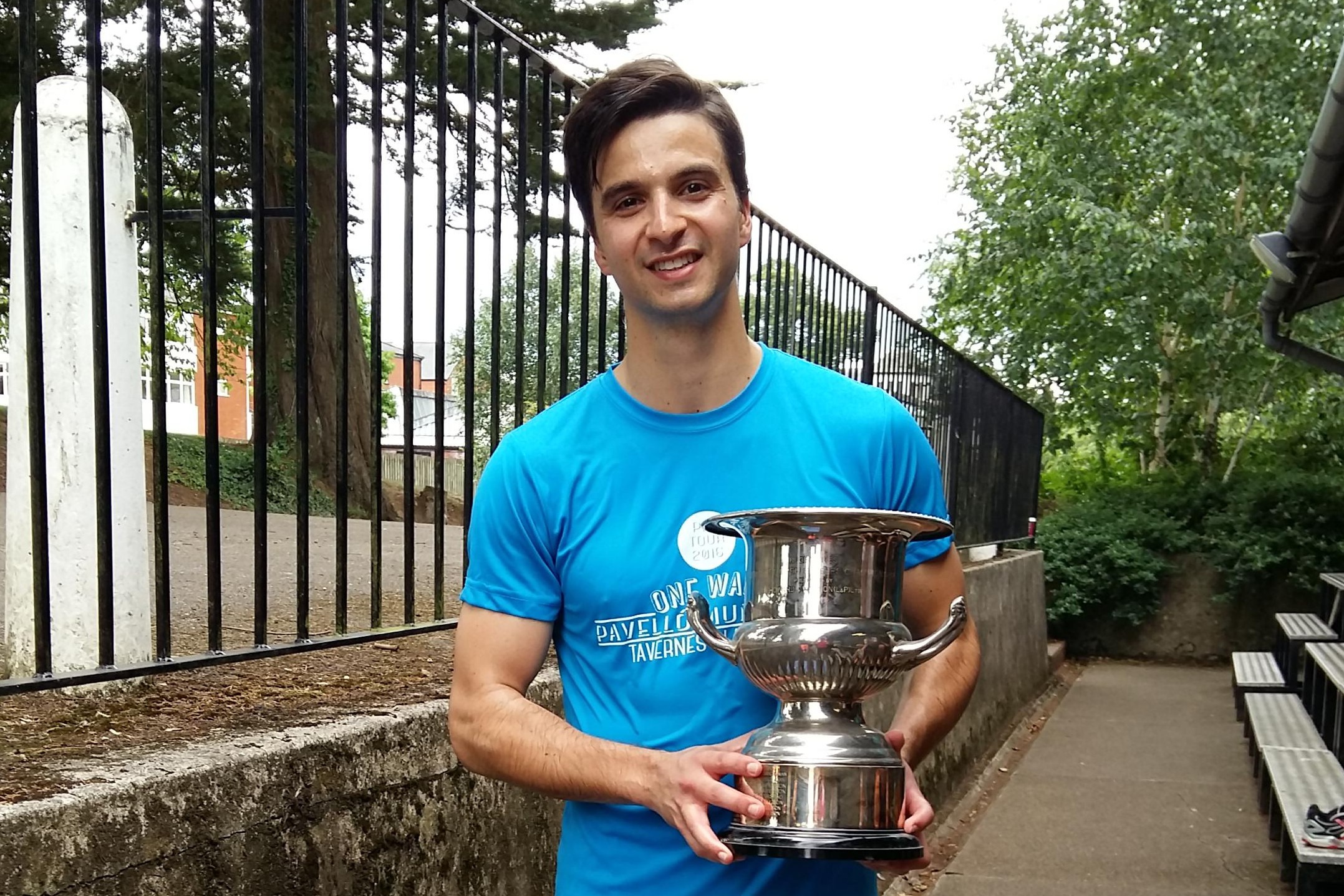 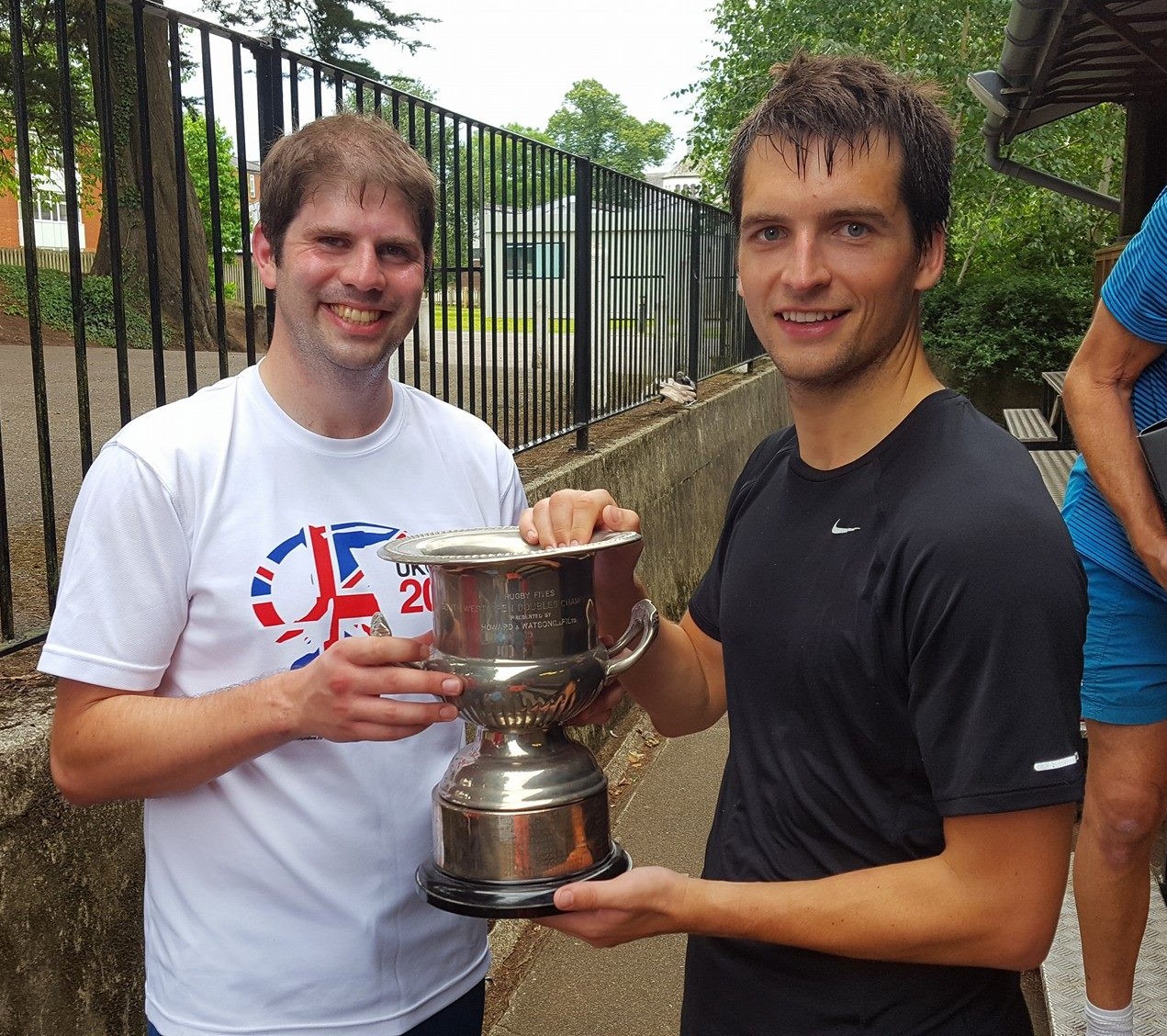 Serious silverware for the Doubles 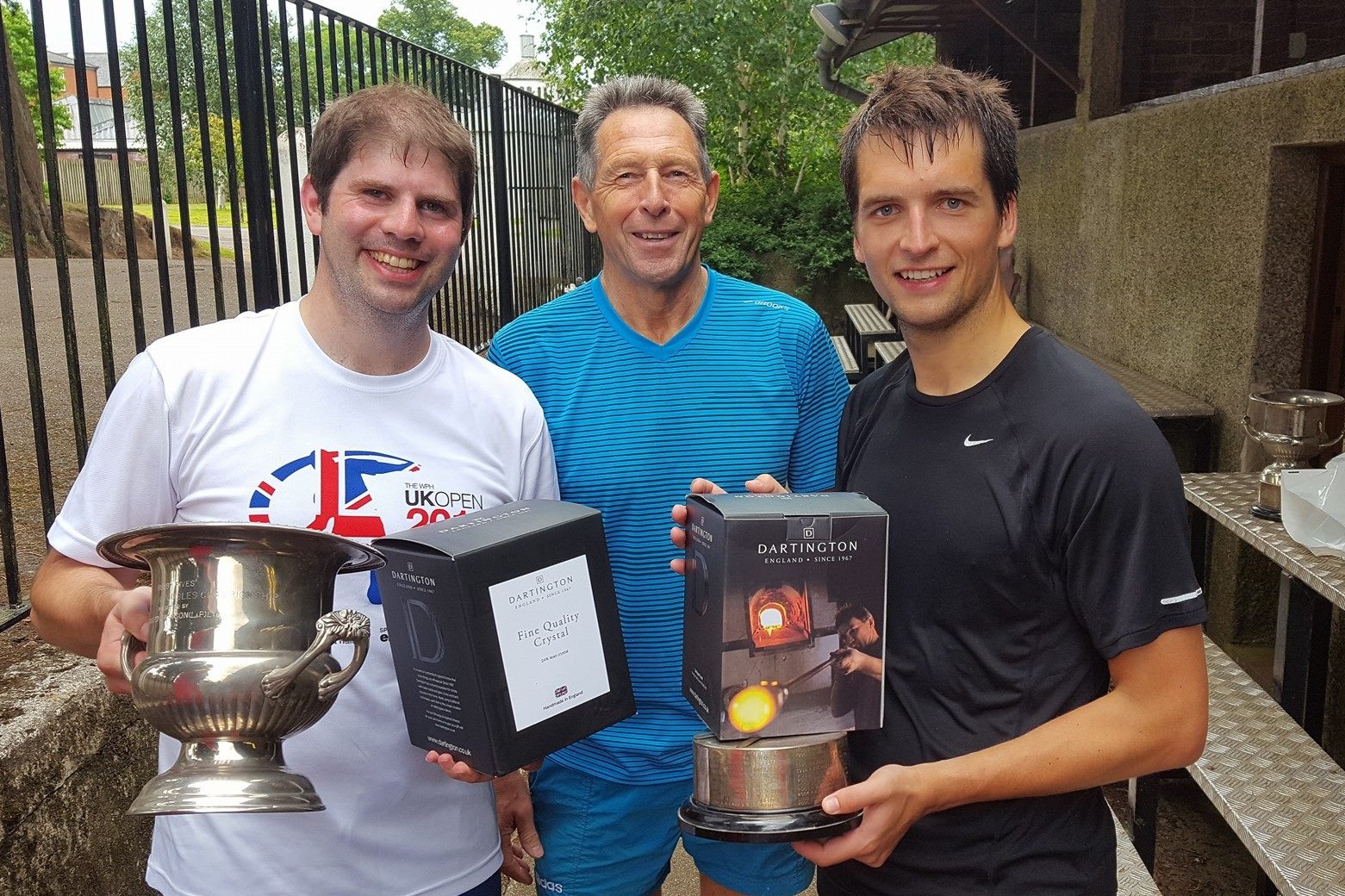 Glassware for the winners 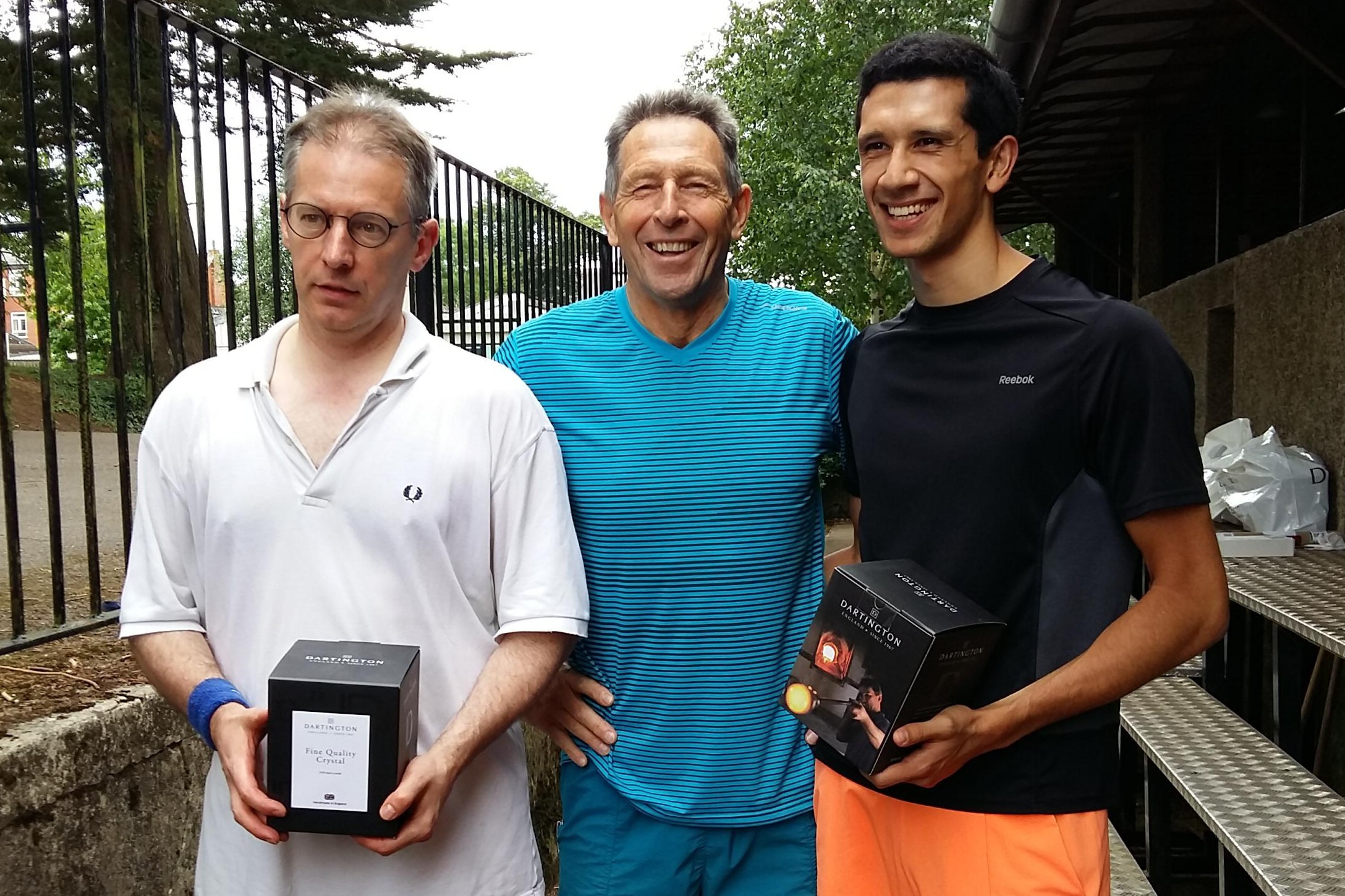 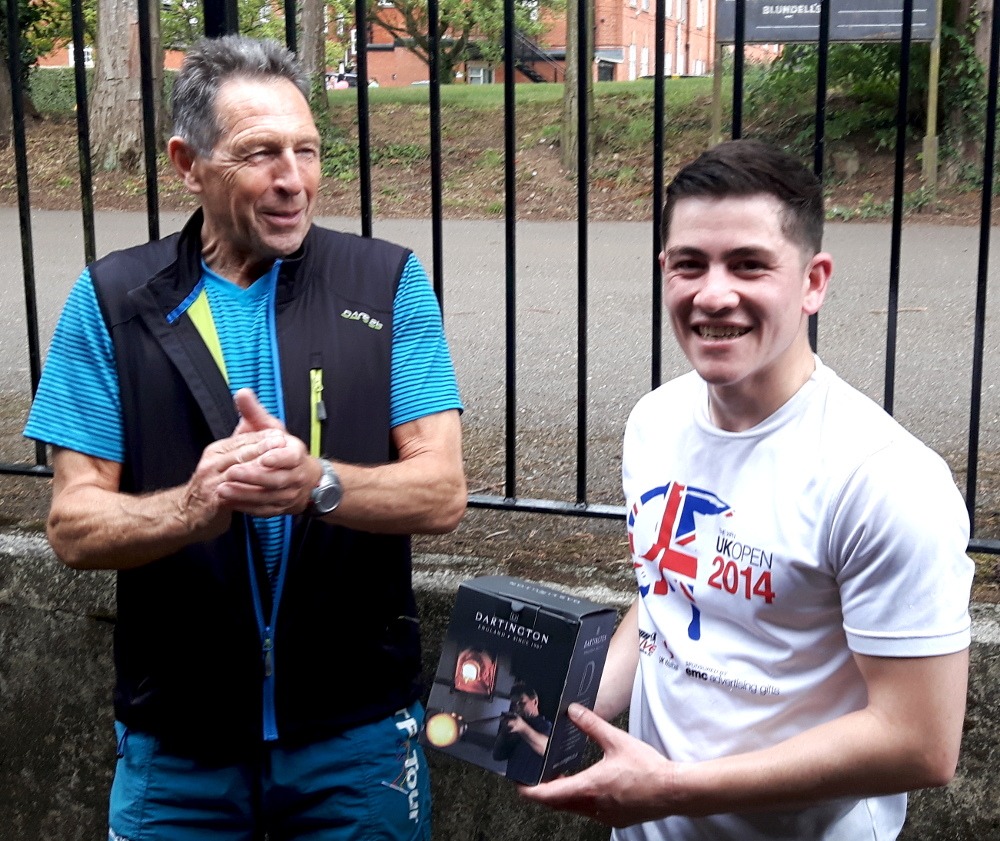 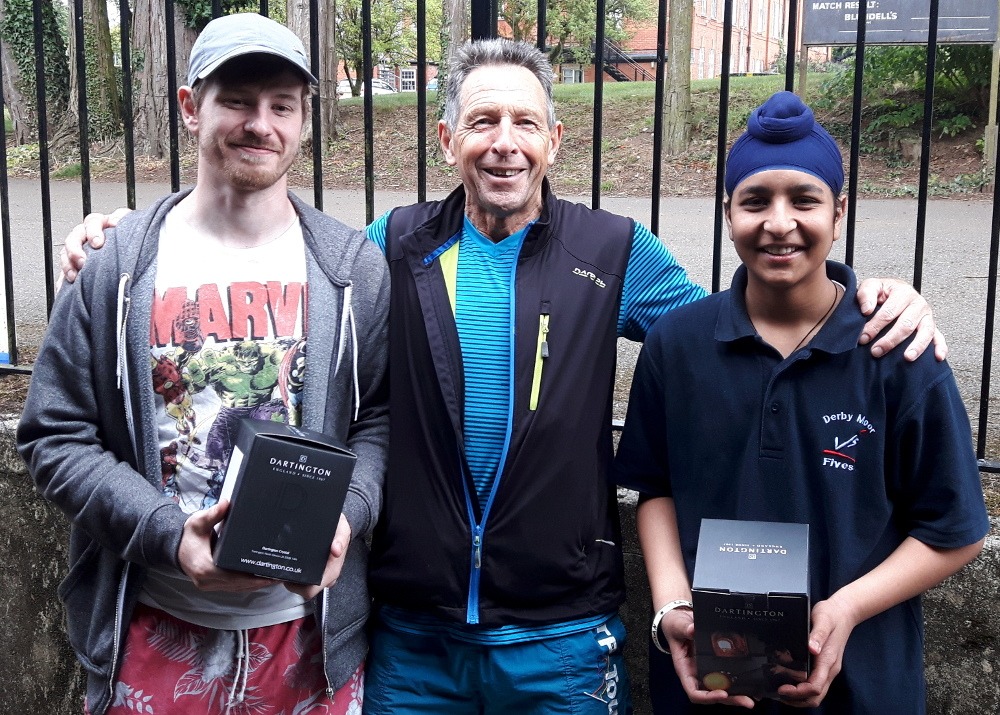 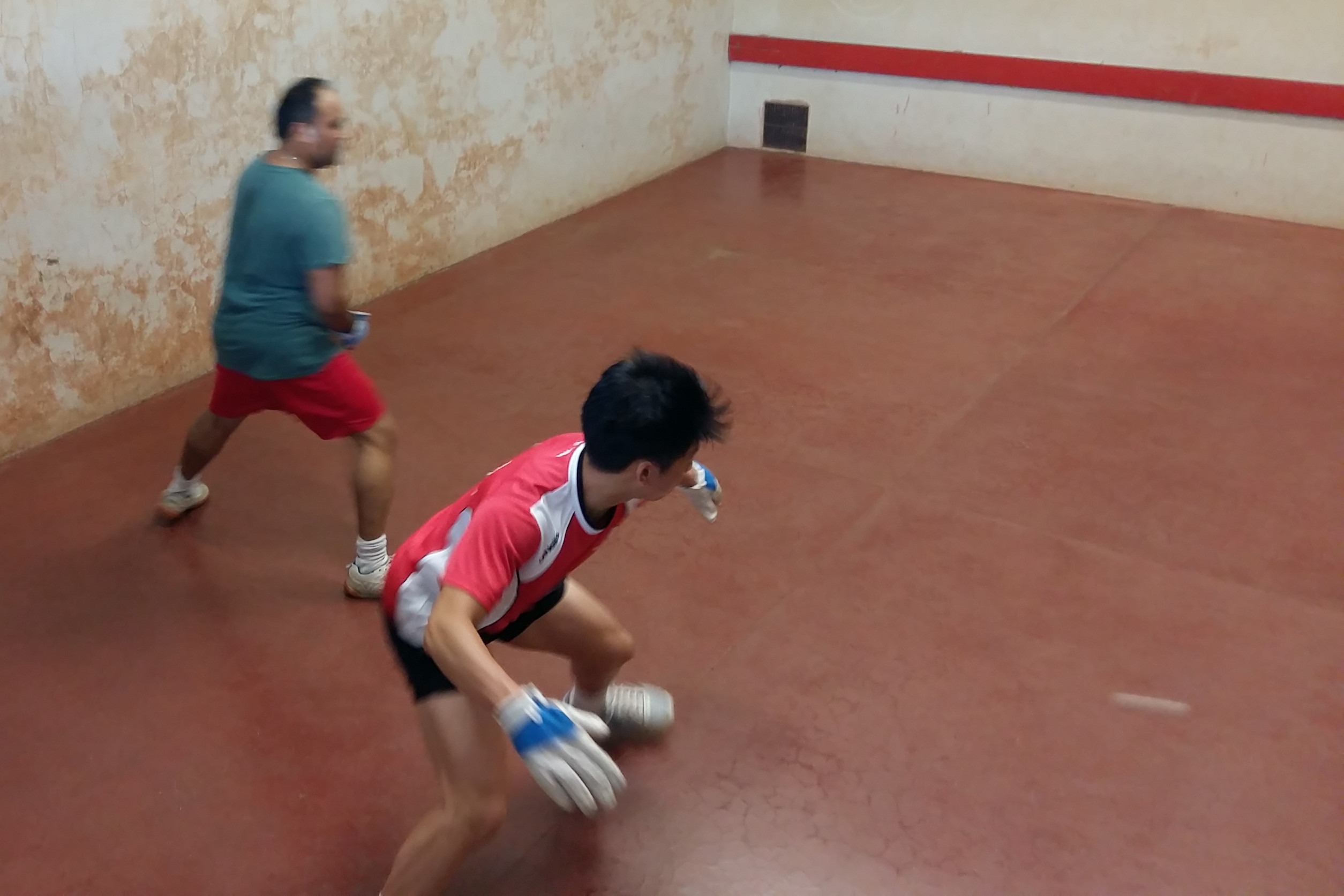 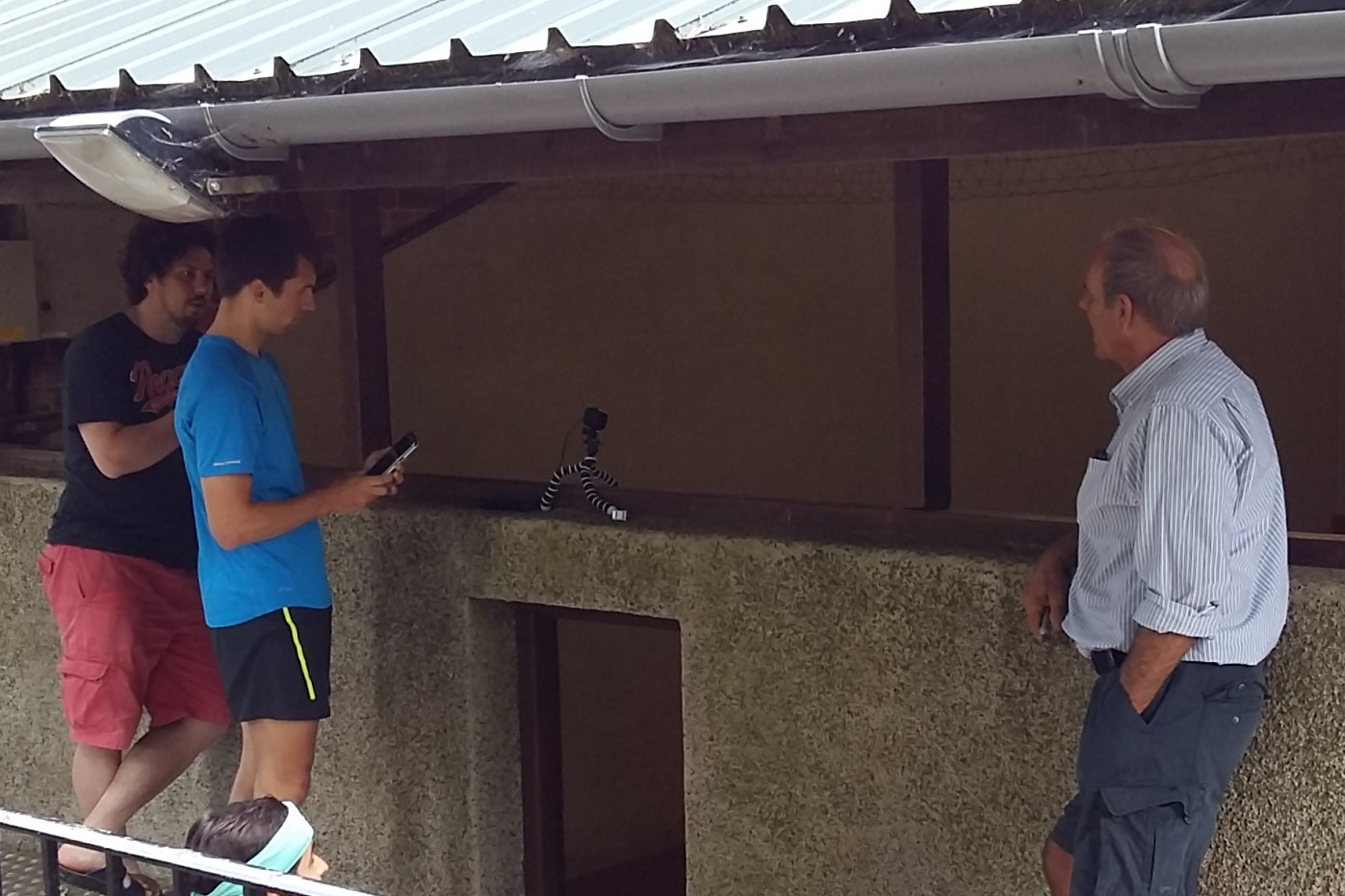 Filming on the front courts