This was an extraordinary day of Firsts and Seconds, of Youngests and Oldests; of all manner of NUMBERS from 0 to 25 and beyond.

It was the FIRST President’s Cup since the death of Denise Hall-Wilton, whose absence was keenly felt by many participating. In her memory David Barnes mounted a photographic tribute to this player, supporter, administrator, photographer and great champion of Fives for Men and Women. The tribute can be seen at the end of this report, along with David’s account of the history of the Cup.

It was the FIRST President’s Cup to be held at St. Paul’s, there no longer being any courts at Merchant Taylors’ School, the long-standing home of this annual event.

Though not the ONLY time that weather conditions had delayed the arrival of players, it was the FIRST time that the Organiser, Gareth Price, had spent FOUR hours immobile on the snow-ridden M-TWENTY-FIVE in a car full of provisions. It was the FIRST time Mark Kiteley had spend ONE AND A HALF hours getting out of Bedford and the FIRST time that Chris Davey had ever abandoned his car by the M-ONE and taken a train to central London with his passengers, the Sorensen brothers. All FIVE players were cheered when they arrived in early afternoon and never have SO MANY starving volunteers helped Gareth to unload the copious catering.

Meanwhile the designated reserve Chris Blakeley had gamely volunteered himself to play FIRST  in ONE pair, then in ANOTHER, and Julian Aquilina likewise, in order to get the bulk of the FIRST round underway. And Peter King kindly came along to ensure we were not booted out at FIVE o’clock.

With SIX courts available there was not a SECOND to lose and in no time at all matches were being played in the LOVE Mug as well as in the Cup. By FIVE o’clock even the T-Pot was underway and there were high hopes of a finish by SEVEN pm or so.

Among the enthralled spectators, marvelling at the standard of play, was Peter Mellor, who had never been to St. Paul’s nor to the President’s Cup — or put another way, it was the FIRST time he had been there. For those who didn’t know who Peter was, it is he and he ALONE who won the National Schools Singles THREE times in a row. The likes of Ed Kay and Dan Tristao bowed down.

Among the players were James Birch and Jolyon Griffiths, both of who have come back to the game after a long absence, in Jolyon’s case an absence of TWENTY-FIVE years. Only a HANDFUL of those present could remember when Jolyon was the organiser of this competition, SEVERAL were not even born.

As the various competitions ran their course it became obvious that some very significant NUMBERS were coming into play. SIXTY-THREE year old Mark Kiteley was heading for his UMPTEENTH final in the Mate’s Plate. He and Dave Butler lost it, though, to Jonny Baker & Chris Davey in THREE l-o-n-g games. By which time it was nearly EIGHT THIRTY.

In the T-Pot Will Ellison ran nearly TEN THOUSAND metres covering for his partner, Bernard Atkinson, who at SEVENTY-SEVEN must surely be the oldest winner of the T-Pot, even if for the SECOND time he had to be content with the Kettle.

In the LOVE Mug Ed Hawke added to his growing collection of platery this season — he did the DOUBLE at Giggleswick — partnering Howard Wiseman, playing for (perhaps) the FIRST time in this tournament, chaperoning his son Gwydion. Even the much decorated UNDER TWENTY-FIVE champion Ed Kay could not stem the success of Ed & Howard

But the most striking numbers came into play in the main final where Dick Warner claimed (loudly) to be the oldest finalist yet at SIXTY-SIX. He was partnered by Hamish Buchanan, who has been in literally MILLIONS of finals (well, almost). Try as they might, however, they could not match the power and consistency of FOURTEEN year old Gwydion (the youngest winner since SIXTEEN year old Jay Gravatt in TWENTY-O-EIGHT) and his partner James Tilston, who has entered this Cup but TWICE and won BOTH times. It must be the FIRST time that a father and son have enjoyed a DOUBLE success in this event; perhaps father and son have NEVER entered before (#ONLYHebdenKnows).

And if it was not a SURFEIT of FIRSTS it was the FIRST time the RFA had been invited to send someone to be interviewed on BBC Radio Wales about the ‘FIVES Ball Situation’, the Sunday Times having chosen that day to run a short story on the death of Nigel Gordon, maker of the G-SIX. The Past President duly turned up at Broadcasting House at SEVEN FIFTY-FIVE the next day to do his bit. Perhaps now DOZENS of potential ball-makers will come out of the woodwork. 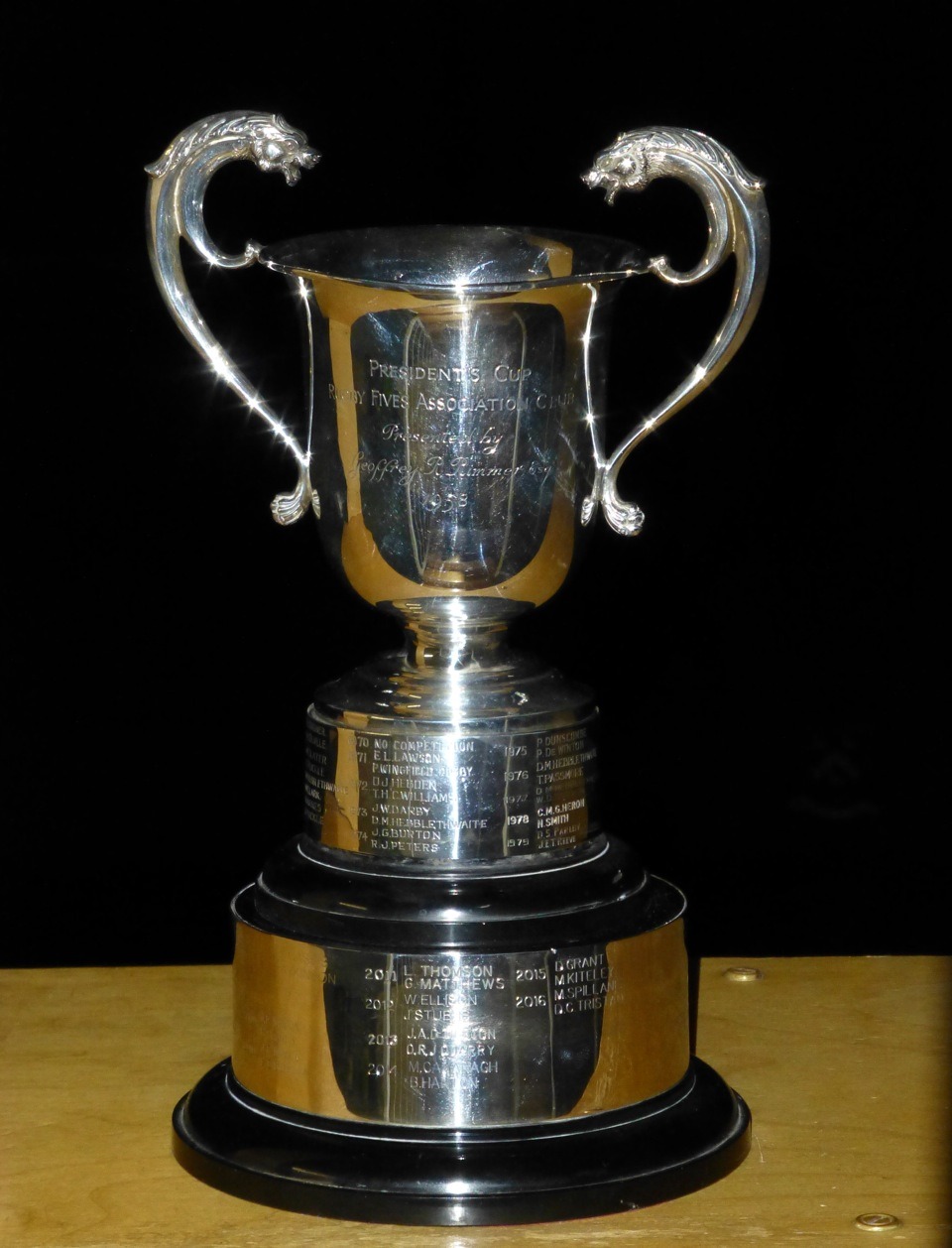 The President’s Cup in all its glory 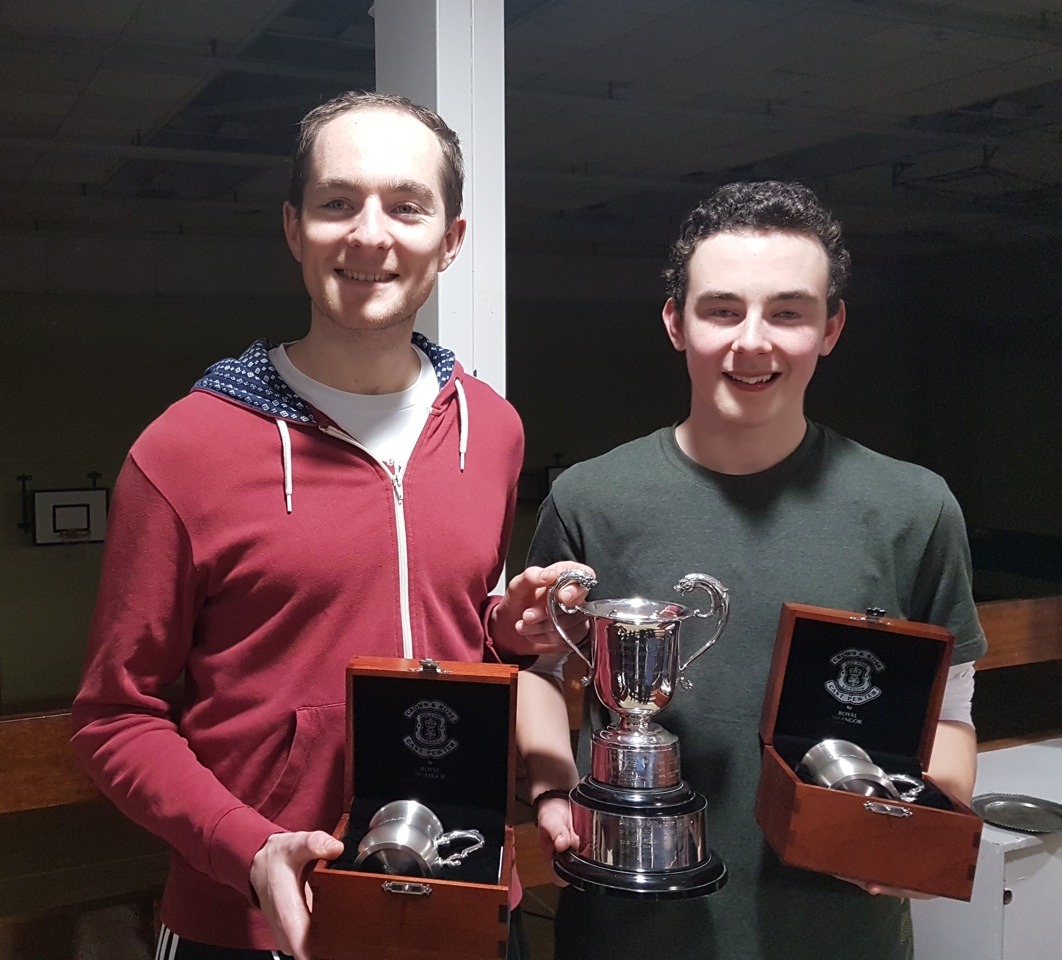 Their CUP runneth over – To the Victors the Spoils 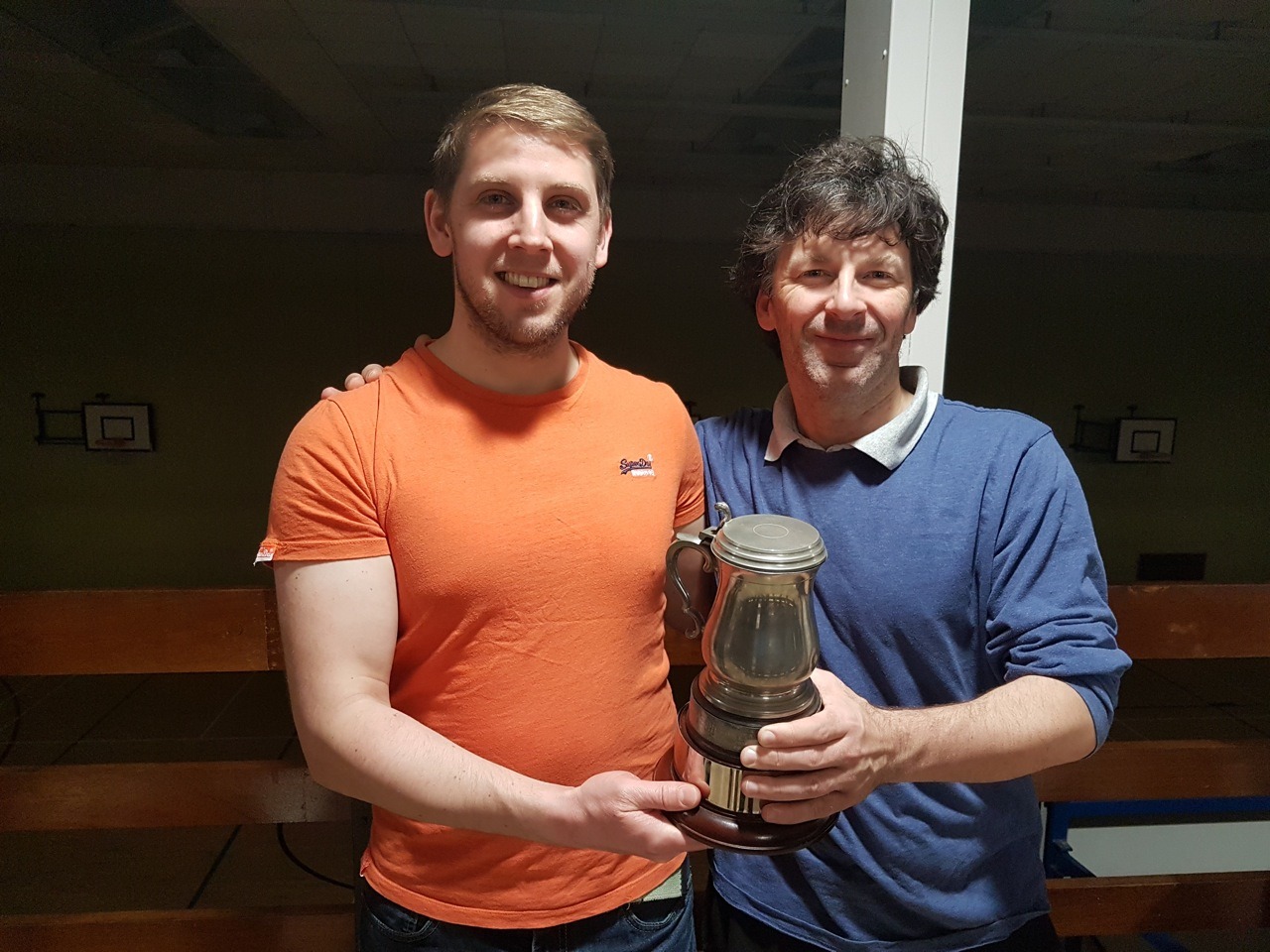 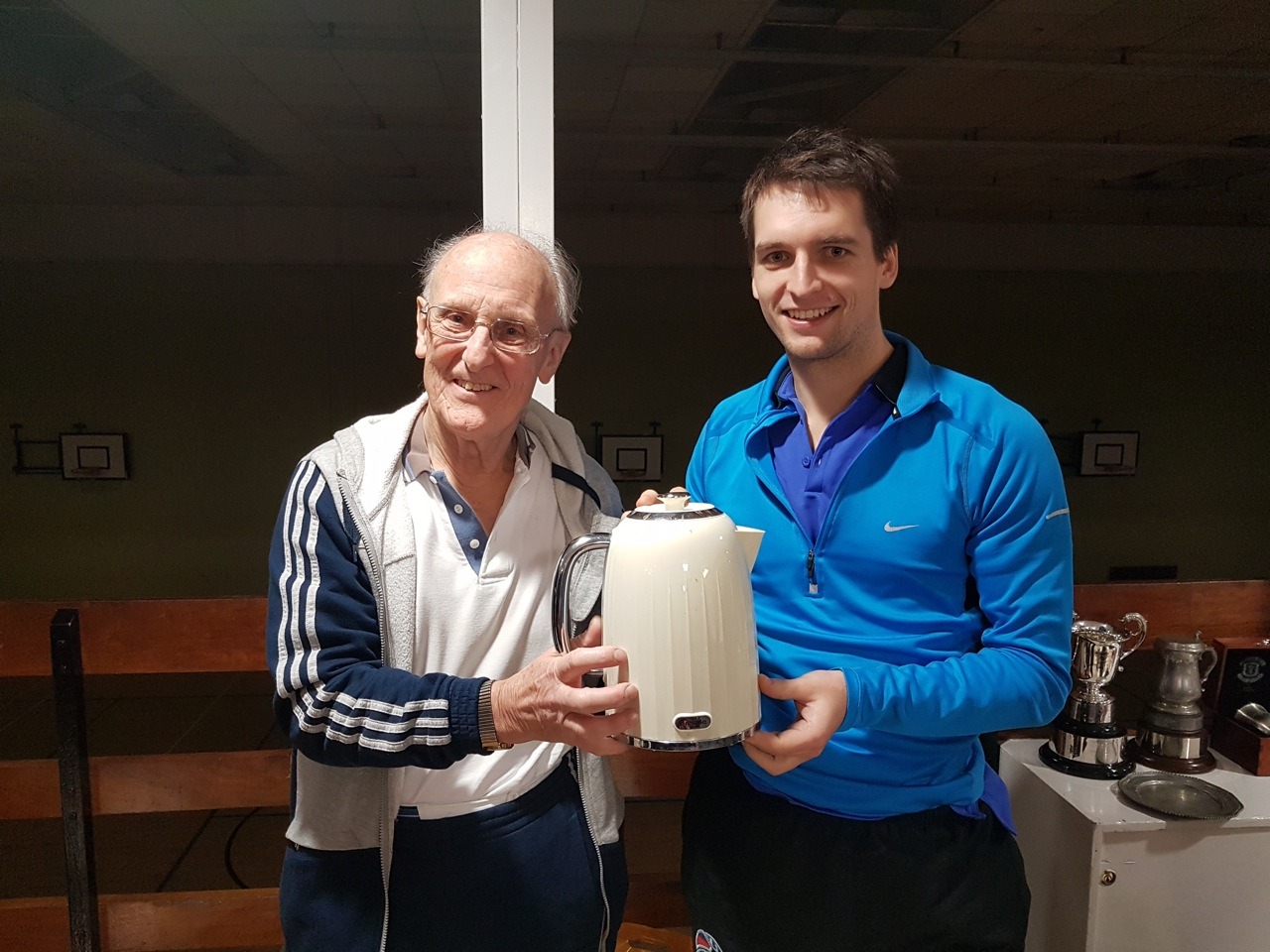 Another Kettle for the President. Where’s the T-POT? 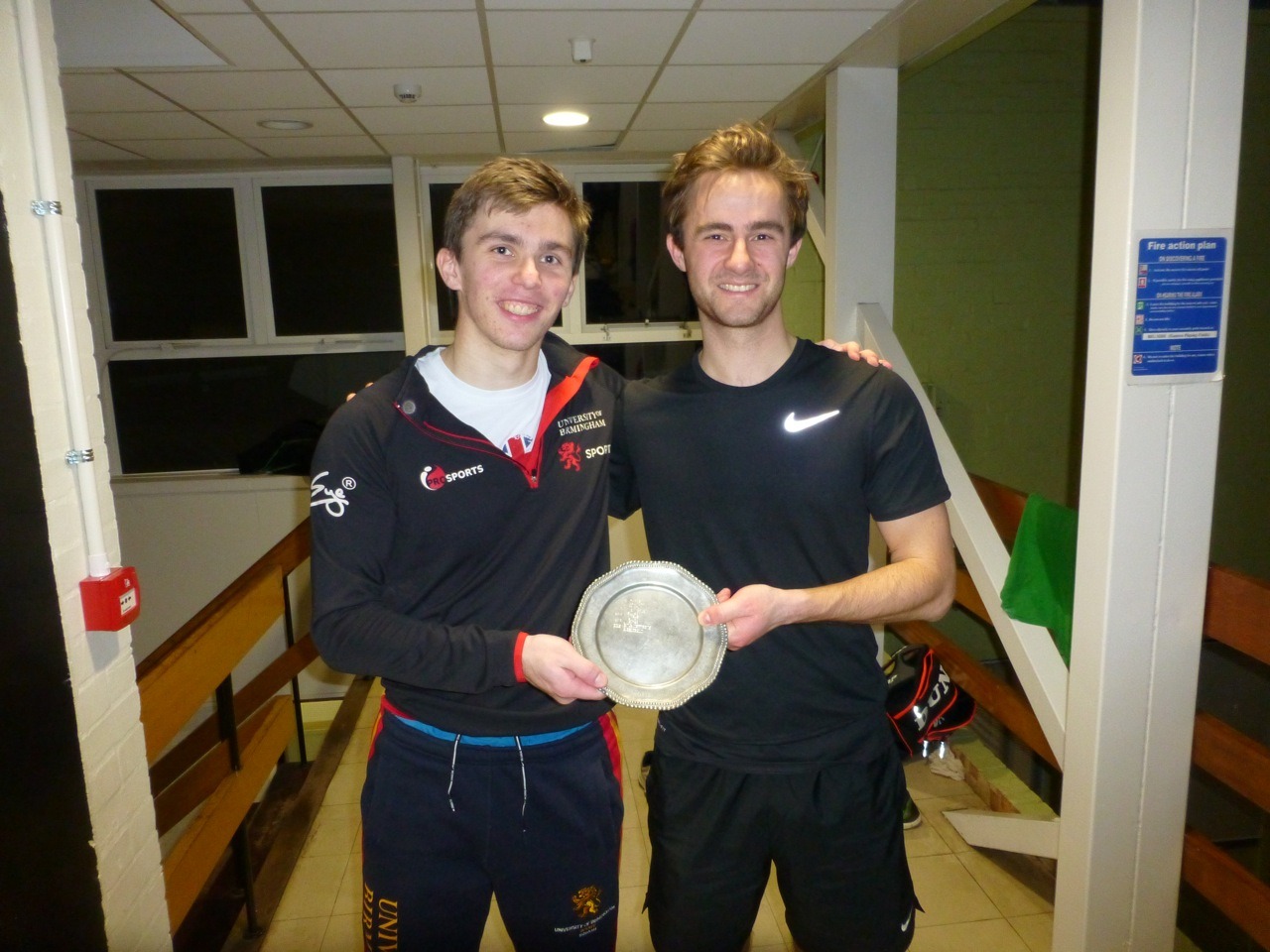 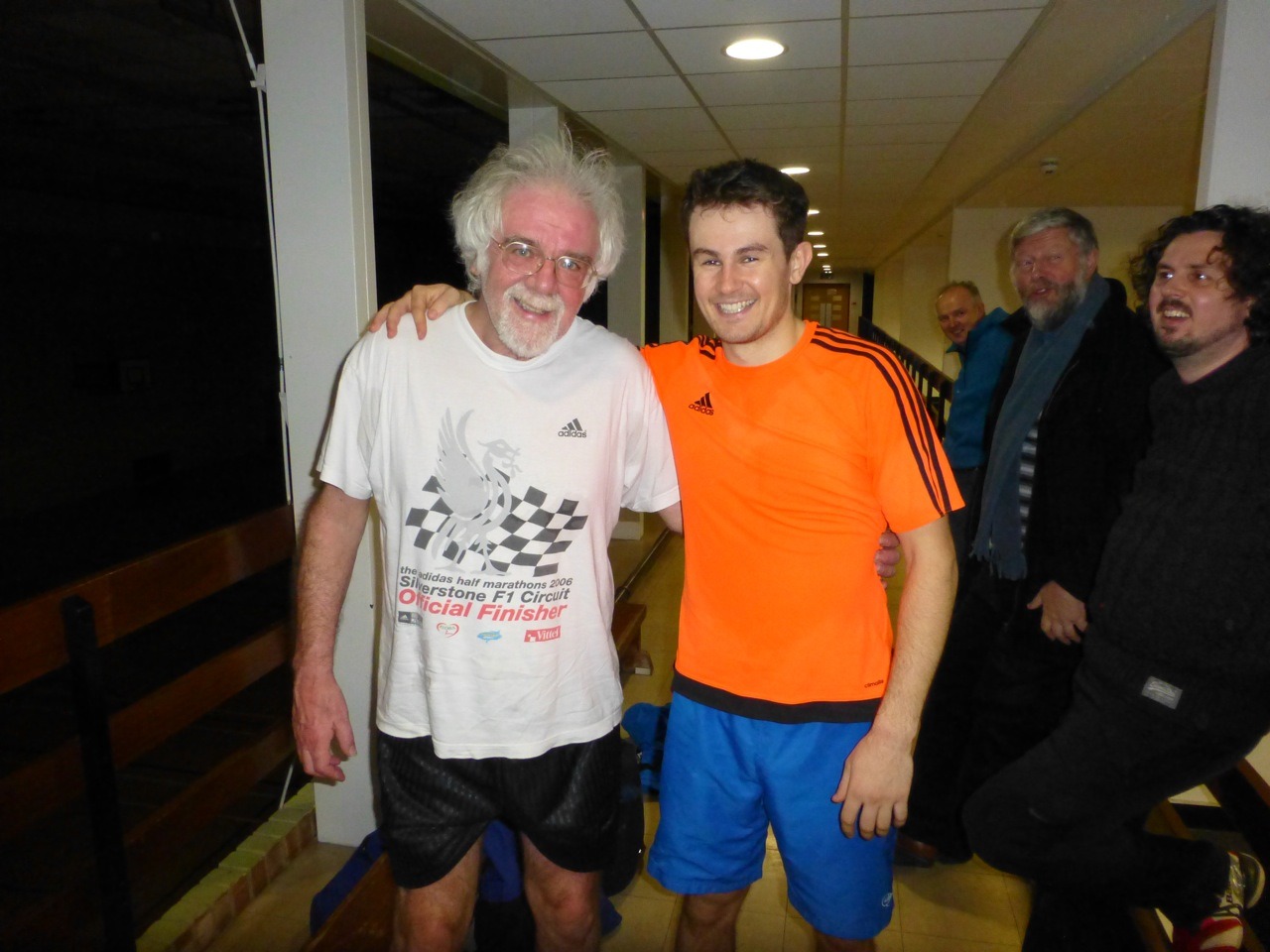 MARK my words: Half past eight and Empty-handed! 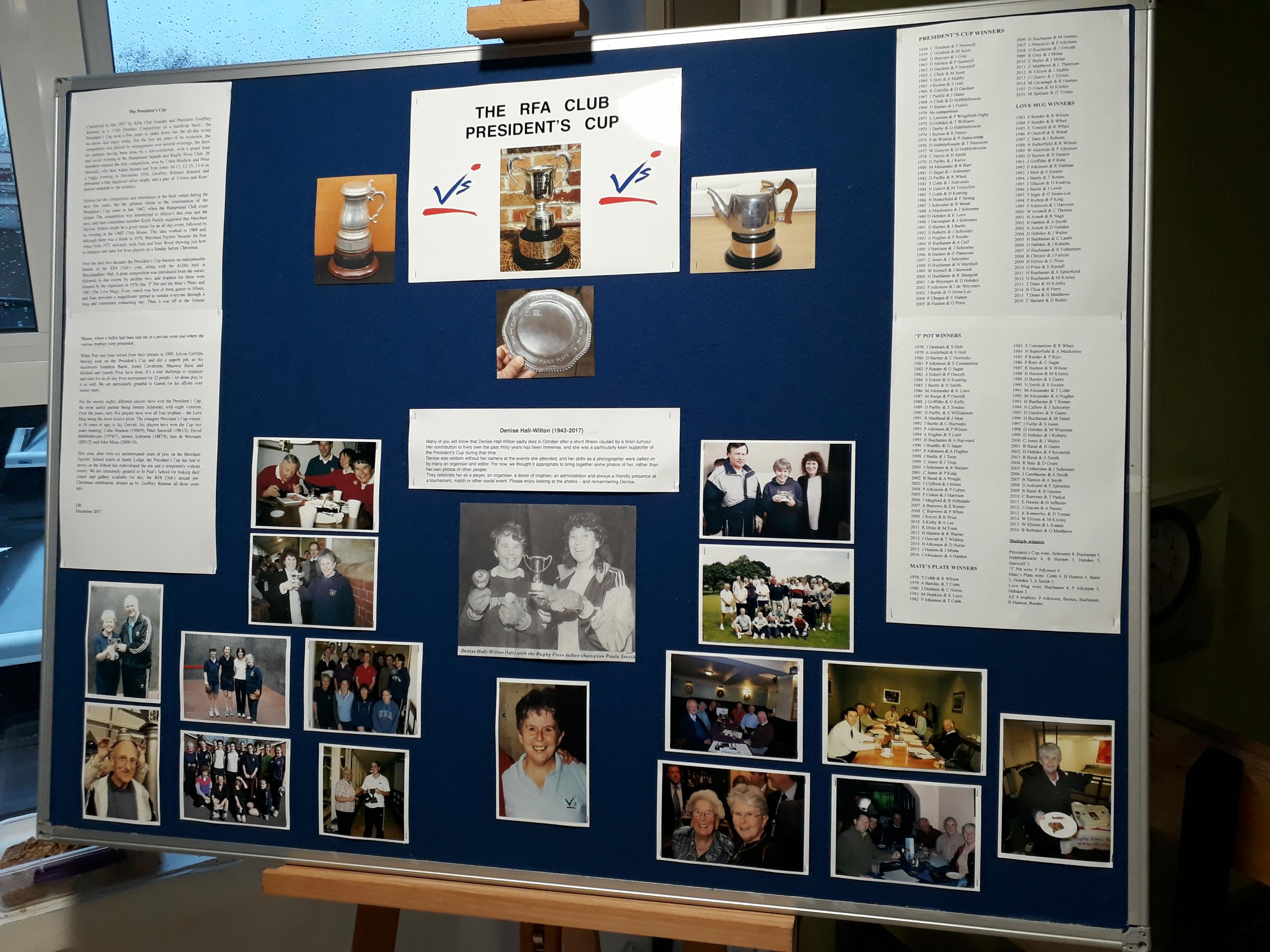 A tribute to DENISE HALL-WILTON by David Barnes

Many of you will know that Denise Hall-Wilton sadly died in October after a short illness caused by a brain tumour.  Her contribution to fives over the past thirty years has been immense, and she was a particularly keen supporter of the President’s Cup during that time.  Denise was seldom without her camera at the events she attended, and her skills as a photographer were called on by many an organiser and editor. For now, we thought it appropriate to bring together some photos of her, rather than her own photos of other people.  They celebrate her as a player, an organiser, a donor of trophies, an administrator and always a friendly presence at a tournament, match or other social event. Please enjoy looking at the photos – and remembering Denise.

Conceived in late 1957 by RFA Club founder and President Geoffrey Rimmer as a ‘Club Doubles Competition on a handicap basis’, the President’s Cup took a few years to shake down into the all-day event we know and enjoy today. For the first ten years of its existence, the competition was played by arrangement over several evenings, the draw for partners having been done by a sub-committee, with a grand final and social evening at the Hampstead Squash and Rugby Fives Club. 26 members entered the first competition, won by Colin Hindson and Peter Snowsill, who beat Adam Horner and Tom Jones 16-15, 12-15, 15-4 on a foggy evening in December 1958. Geoffrey Rimmer donated and presented a fine engraved silver trophy and a pair of ‘Crown and Rose’ pewter tankards to the winners.

Entries for the competition and attendance at the final varied during the next few years, but the greatest threat to the continuation of the President’s Cup came in late 1967, when the Hampstead Club court closed. The competition was transferred to Alleyn’s that year and the next, and then committee member Keith Puckle suggested that Merchant Taylors’ School might be a good venue for an all-day event, followed by an evening at the OMT Club House. This idea worked in 1969 and, although there was a blank in 1970, Merchant Taylors’ became the firm venue from 1971 onwards, with Tom and Joan Wood showing just how to organize and cater for fives players on a Sunday before Christmas.

Over the next two decades the President’s Cup became an indispensable feature of the RFA Club’s year, along with the AGMs held at Waxchandlers’ Hall. A plate competition was introduced from the outset, followed in due course by another two, and trophies for these were donated by the organisers in 1978 (the ‘T’ Pot and the Mate’s Plate) and 1983 (The Love Mug). Every match was best of three games to fifteen, and Joan provided a magnificent spread to sustain everyone through a long and sometimes exhausting day. Then it was off to The Greene Manne, where a buffet had been laid out in a private room and where the various trophies were presented.

When Tom and Joan retired from their labours in 1989, Jolyon Griffiths bravely took on the President’s Cup and did a superb job, as his successors Jonathon Bartle, Justin Cawthorne, Bhaswar Baral and Richard and Gareth Price have done. It’s a real challenge to organize and cater for an all-day fives tournament for 32 people – let alone play in it as well. We are particularly grateful to Gareth for his efforts over recent years.

For the record, eighty different players have won the President’s Cup, the most useful partner being Jeremy Schroeter, with eight victories. Over the years, only five players have won all four trophies – the Love Mug being the most elusive prize. The youngest President’s Cup winner, at 16 years of age, is Jay Gravatt. Six players have won the Cup two years running: Colin Hindson (1958/9), Peter Snowsill (1961/2), David Hebblethwaite (1976/7), Jeremy Schroeter (1987/8), Iain de Weymarn (2001/2) and John Minta (2009/10).

This year, after forty-six uninterrupted years of play on the Merchant Taylors’ School courts at Sandy Lodge, the President’s Cup has had to move, as the School has redeveloped the site and is temporarily without courts. We are immensely grateful to St Paul’s School for making their courts and gallery available for this, the RFA Club’s annual pre-Christmas celebration, dreamt up by Geoffrey Rimmer all those years ago.