STOP PRESS After many years of playing in competitions at all levels Stuart Kirby finally, and deservedly, has won his first national title in Rugby Fives: the Vintage Singles. And having achieved this, Stuart then went on to win the Doubles with his opponent in the Singles final, multiple champion Neil Roberts. Their opposition in the Doubles final were Richard Christie & Brian Kirk, also featuring in their first national final.

See below for report and scores 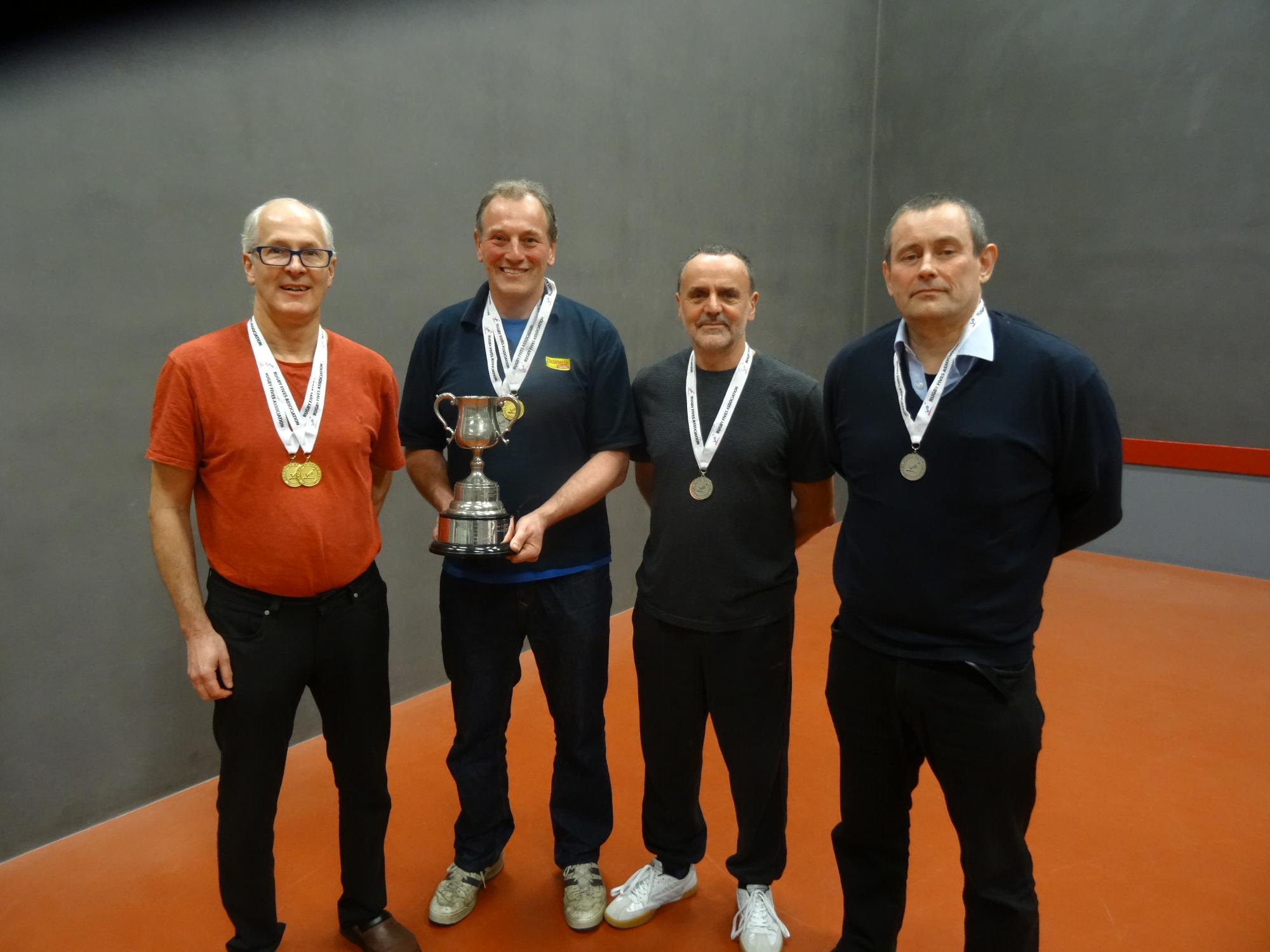 Ian Fuller and Dave Hebden having declared their intention not to defend their titles, there were certain to be new names engraved on the trophies this year. Organiser Brian Kirk assembled 16 competitors at New Portugal Place to vie for the silverware. Eleven of them contested the Singles in the morning. Two early  matches stood out: having warmed up with a match against Chris Blakeley Nick Geere gave first seed Neil Roberts much more than an easy run out in the second round, while Richard Christie, something of an unknown quantity as a Singles player, battled his way first past Andy Passey, then likewise against Dick Warner. Tony Hamilton meanwhile came out on top in a quality match with Angus Hanton; and Stuart Kirby eased his way past Phil Atkinson. In the semi-finals Neil Roberts’ win over Richard Christie was nowhere near as comfortable as the score suggests, but Stuart began to look ominously strong as he dismissed his familiar adversary Tony Hamilton.

In the final Stuart raced into a large lead with effective serving and a variety of down-the-wall shots but then found himself pegged back to 9-9 as, uncharacteristically, his serve let him down. But, after some nervy rallies, the first game was secured at 11-9  and, in the second game, Stuart made his greater mobility and those same returns-of-serve down the left-hand wall count. A visibly tiring Neil found himself quickly outmanoeuvred. Stuart’s Derby Moor clubmates suggested their man owed Anthony Goodwin a beer for all the matches he had played with Stuart to sharpen up his game!

Meanwhile a three-man Plate competition delivered victory for Brian Kirk who was beginning to look like a man on a mission.

With the arrival of the northern contingent — Sandie and Nithsdale — ,  olds hands Sutcliffe and Kiteley, and of course the President, the Doubles got underway in two pools. Kirby & Roberts looked unstoppable in Pool A and they were joined in the next stage by Geere & Hanton who were just that little bit sharper than main rivals Nithsdale & Sutcliffe. In the other pool the well-practised partnership of Christie & Kirk swept all before them, leaving Hamilton & Warner to fight it out successfully with Bernard Atkinson & Andy Passey for the fourth semi-final slot.

In the semis Kirby & Roberts were too steady for Hamilton & Warner,  but next door the match between Christie & Kirk and Geere & Hanton was a humdinger from which the Derby pair emerged narrow victors 16-14.  After such a tight semi-final contest it was asking too much of Richard & Brian to take the favorites to the wire, and Stuart & Neil duly emerged as champions at their second attempt.

A lengthy 4-pair Doubles Plate raged on in the adjacent courts, going to the very last match. When Bernard Atkinson, playing in his 21st Vintage tournament, 16 years after he won it, heard that he could win the Plate with 46 points “something clicked in my head”. Luckily it wasn’t in his hip or knee! He did indeed win it, with his partner Andy Passey, by just 2 points: their earlier 16-14 victory over Phil Atkinson & Mark Kiteley  turned out to be crucial. Mugs-for-Horlicks were their prize.

Huge thanks to organiser Brian Kirk from all competitors and spectators, and from the fans in Banstead and Burgundy, both of whom were present, Dave having come to return the Doubles trophy and Bob having come to perform twitter duty. This competition deserves to go up to 20 players next year: young Mr Hanton and others, beware — we’ll be on your case. 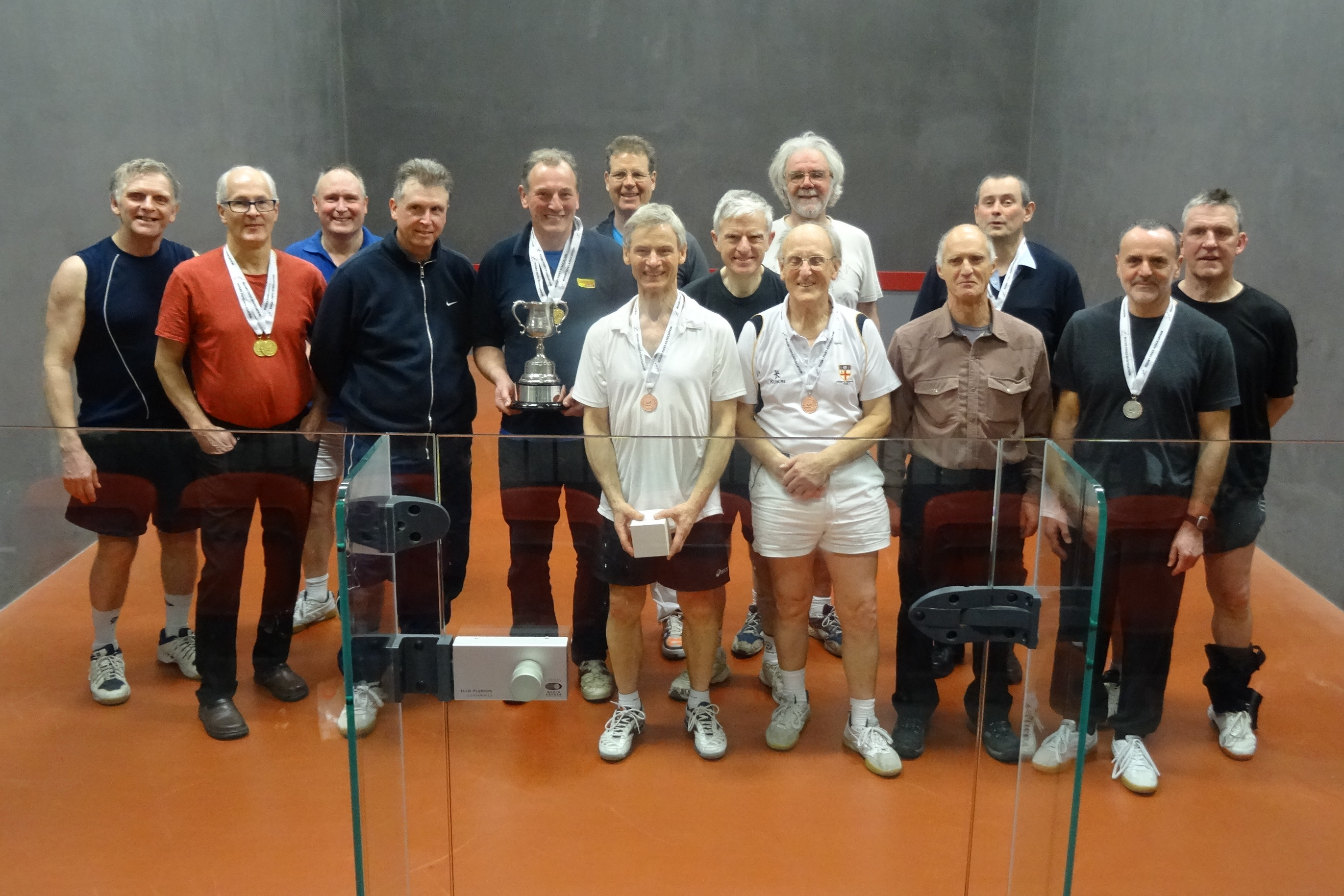 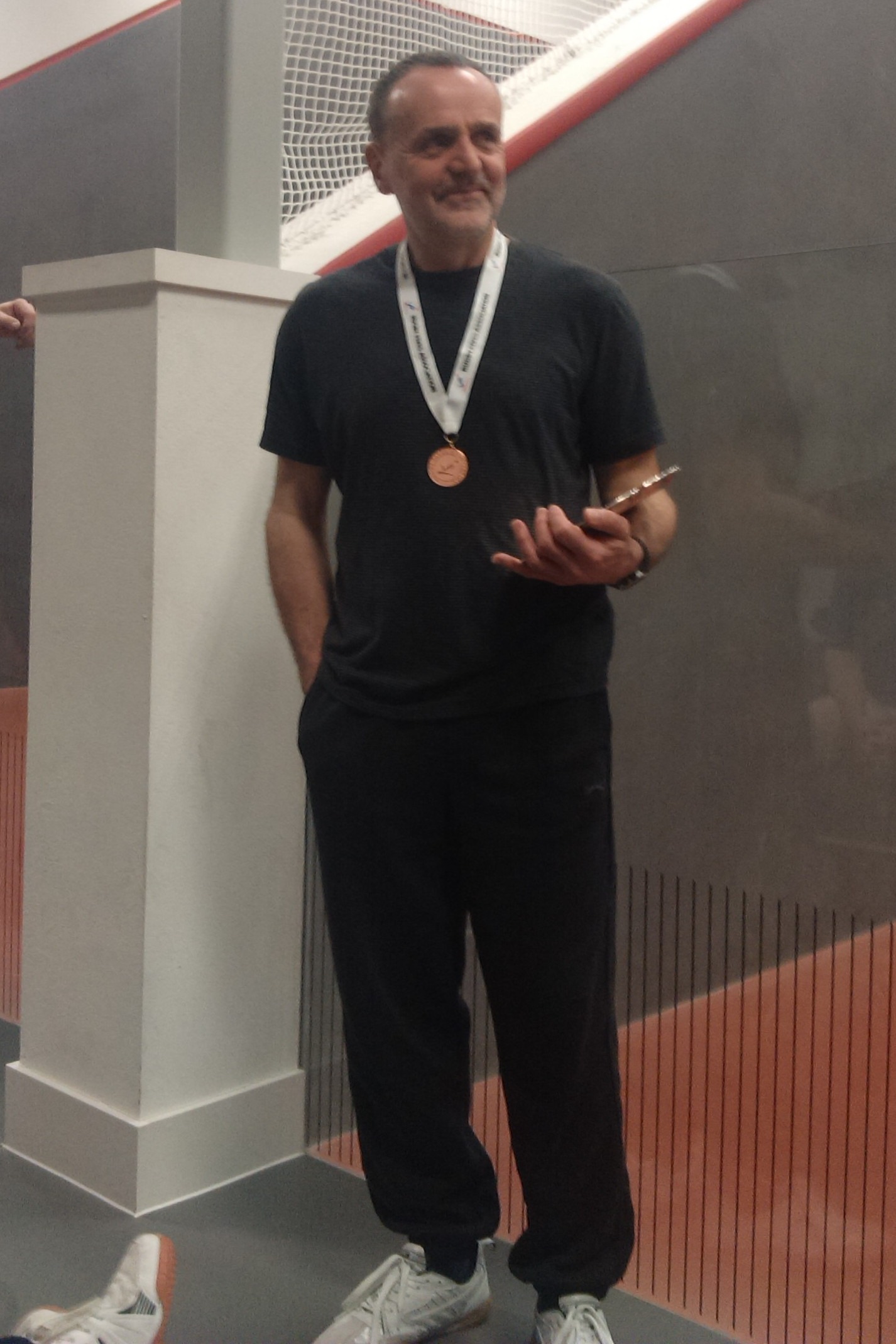 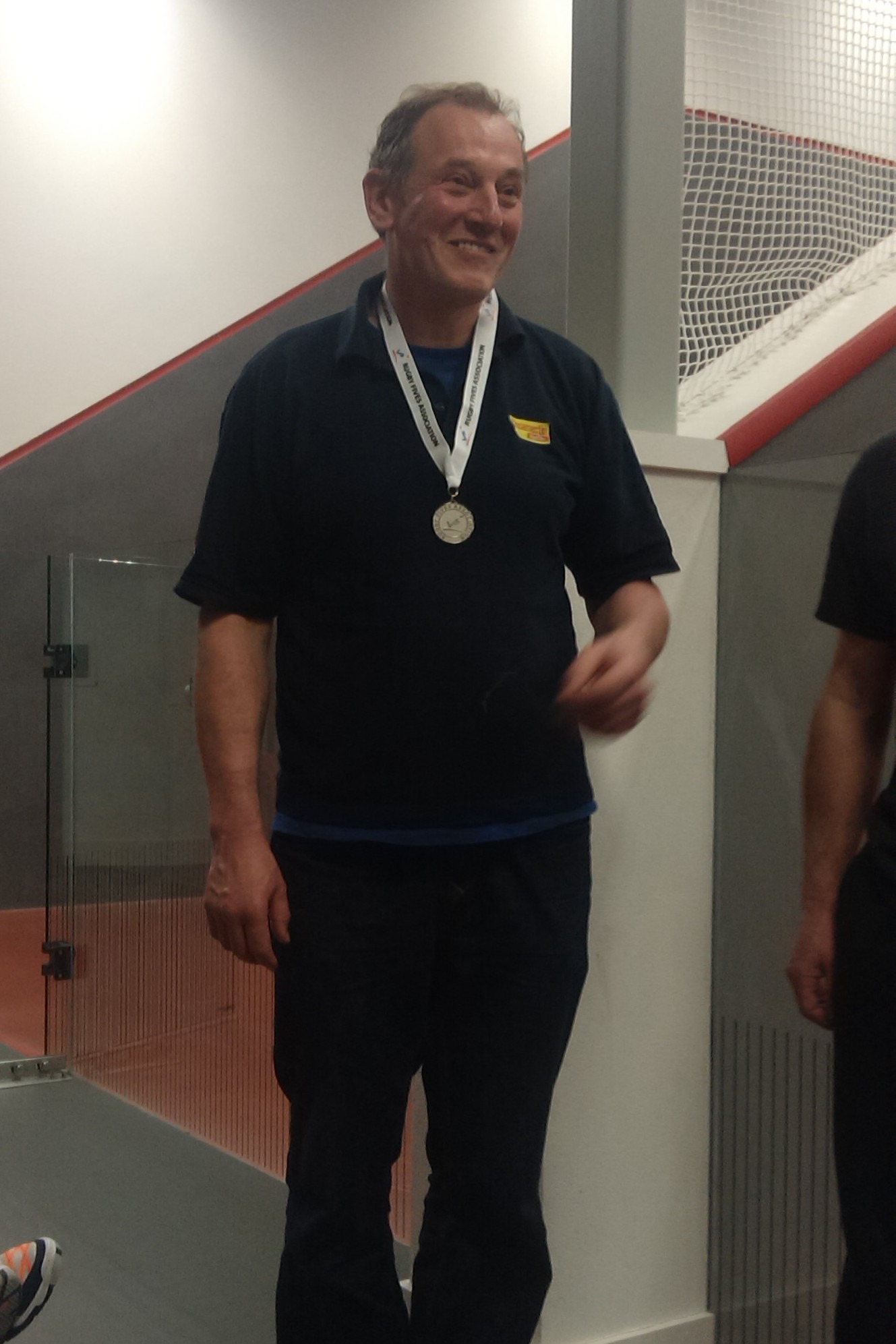 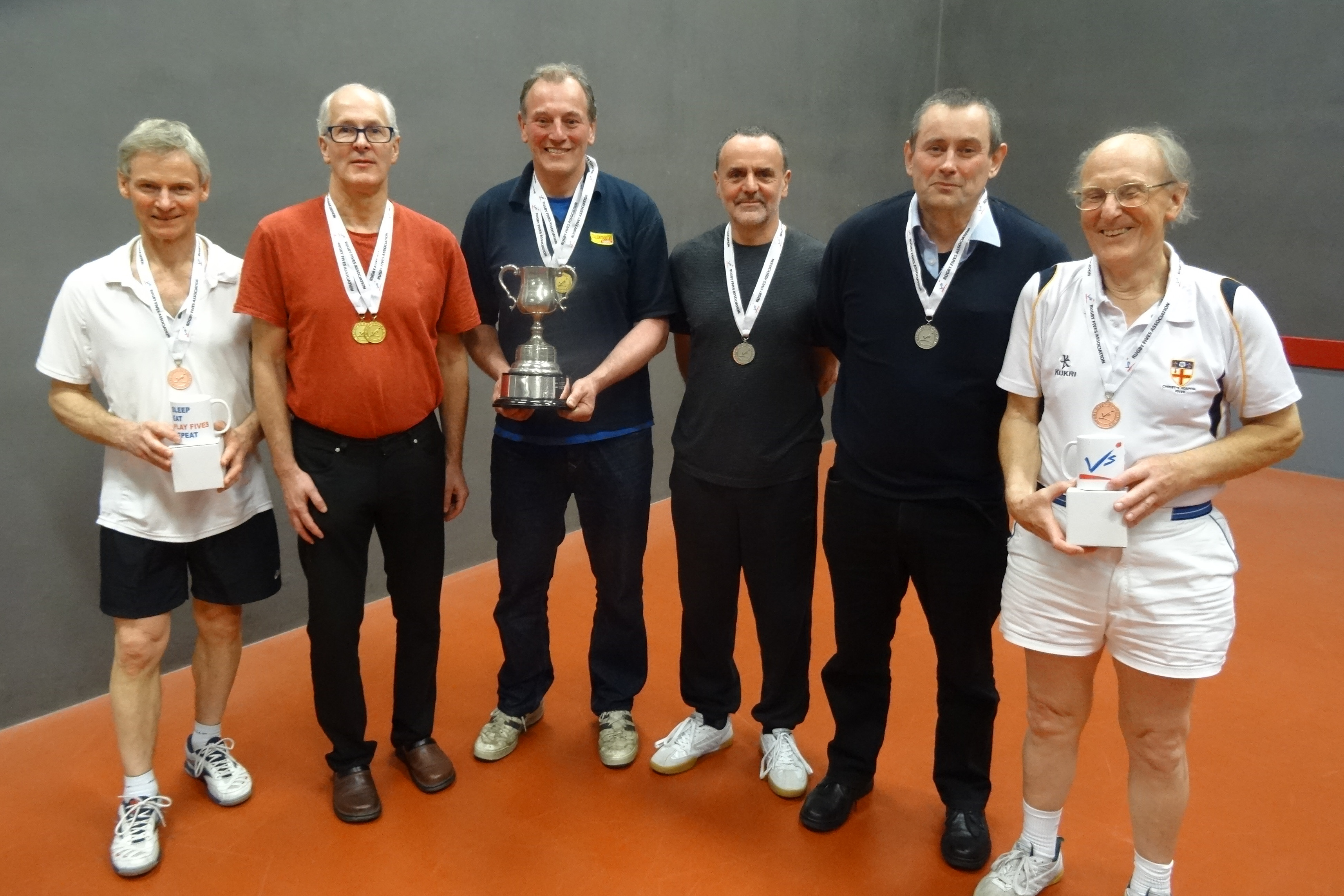 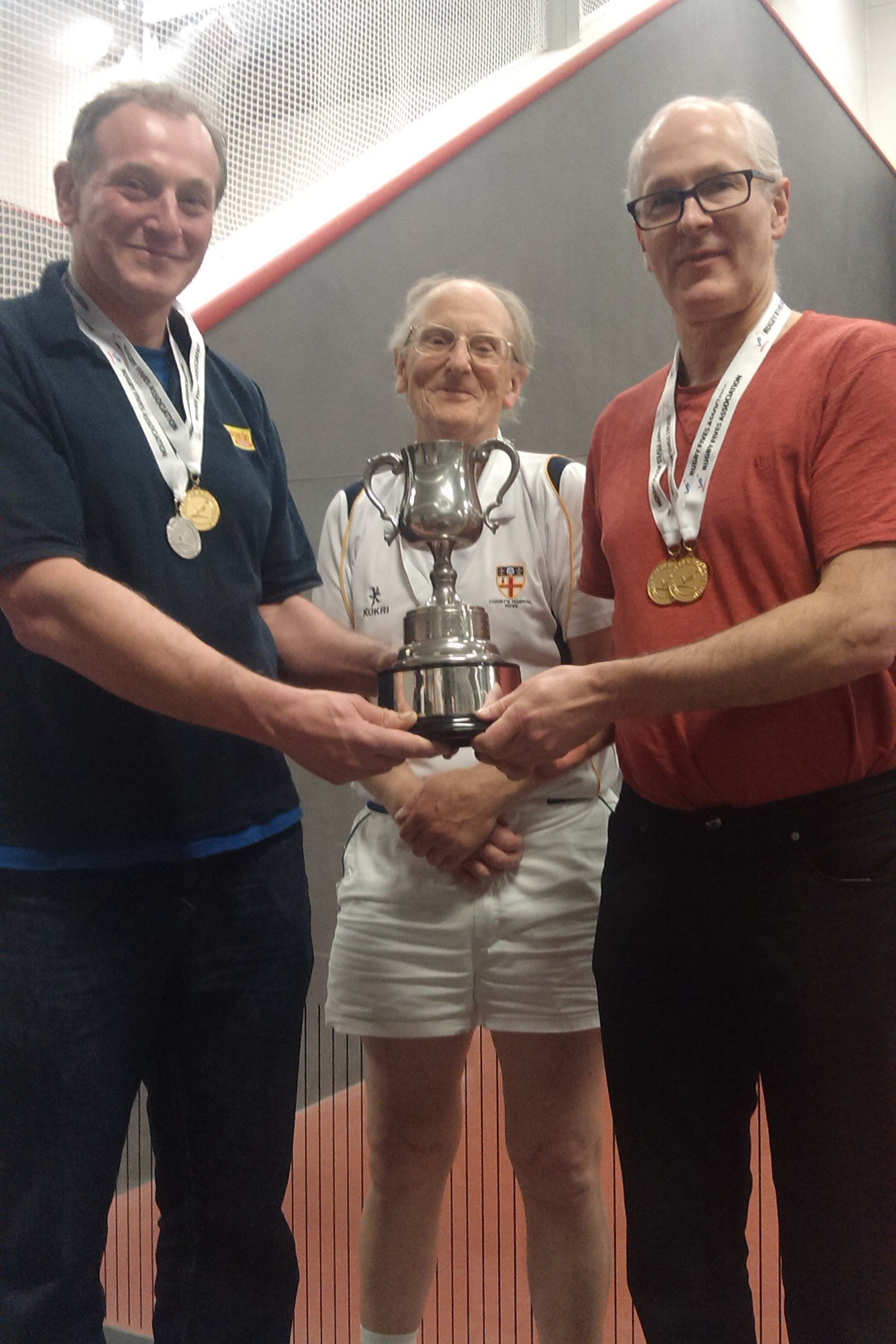 The President may have shrunk since he won this trophy in 2001!