STOP PRESS: There were 37 representatives, boys and girls, from Alleyn’s Junior and Alleyn’s Senior School, Bedford Modern, Blundell’s, Pilgrims’ and St. Olave’s at this National Championship. In the Singles 16 players emerged from 6 pools to contest the main knock-out. Eventually there was one all-Alleyn’s semi-final and another, all-St. Olave’s. Both were close-fought affairs. In the final Caleb Boy from St. Olave’s had too strong a left-hand serve for his opponent and ran out a comfortable winner.

In the Doubles the same two schools dominated, but the Blundell’s first pair made their way to a well-deserved semi-final appearance, while two pairs from Pilgrims’ played out the Plate final. Victory in the main final for Franklin Baron & Caleb Boy meant that both trophies returned to St. Olave’s.

The event was run for the first time by Sam Russell, ably assisted by Dave Butler, who did some coaching and put on an exhibition match with Julian Aquilina. The RFA would like to thank all of these warmly for their work on the Association’s behalf.

Organiser Sam Russell reports:  As you brewed your morning cup of tea and glanced over the headlines of The Sunday Times on 18th March, you might have decided that you would spend this uncharacteristically cold spring day relaxing in the warmth of your home. But no such luxury was afforded to 37 young fives players and their respective coaches that morning, nor did they want it to be, as they braved the cold and travelled to London in search of one thing: victory in the National U13 Rugby Fives Championships.

Due to the snowy conditions and the fact that this was a fives tournament, the majority of the schools playing (including Pilgrims’, Blundell’s, St Olave’s, Bedford Modern, Alleyn’s Senior and Junior) turned up late. This gave Mr. Hammond, head coach of Pilgrims’, time to give his players an animated team talk, pointing at nicks and demonstrating intricate footwork, in a display that might well have inspired Will Ellison to beat Dan Tristao. As the clock chimed ten and it became clear that the heroic effort by Blundell’s to arrive from Devon was further delayed, the organiser decided to get proceedings underway, standing on a chair and declaring: ‘Let the hunger games begin.’ 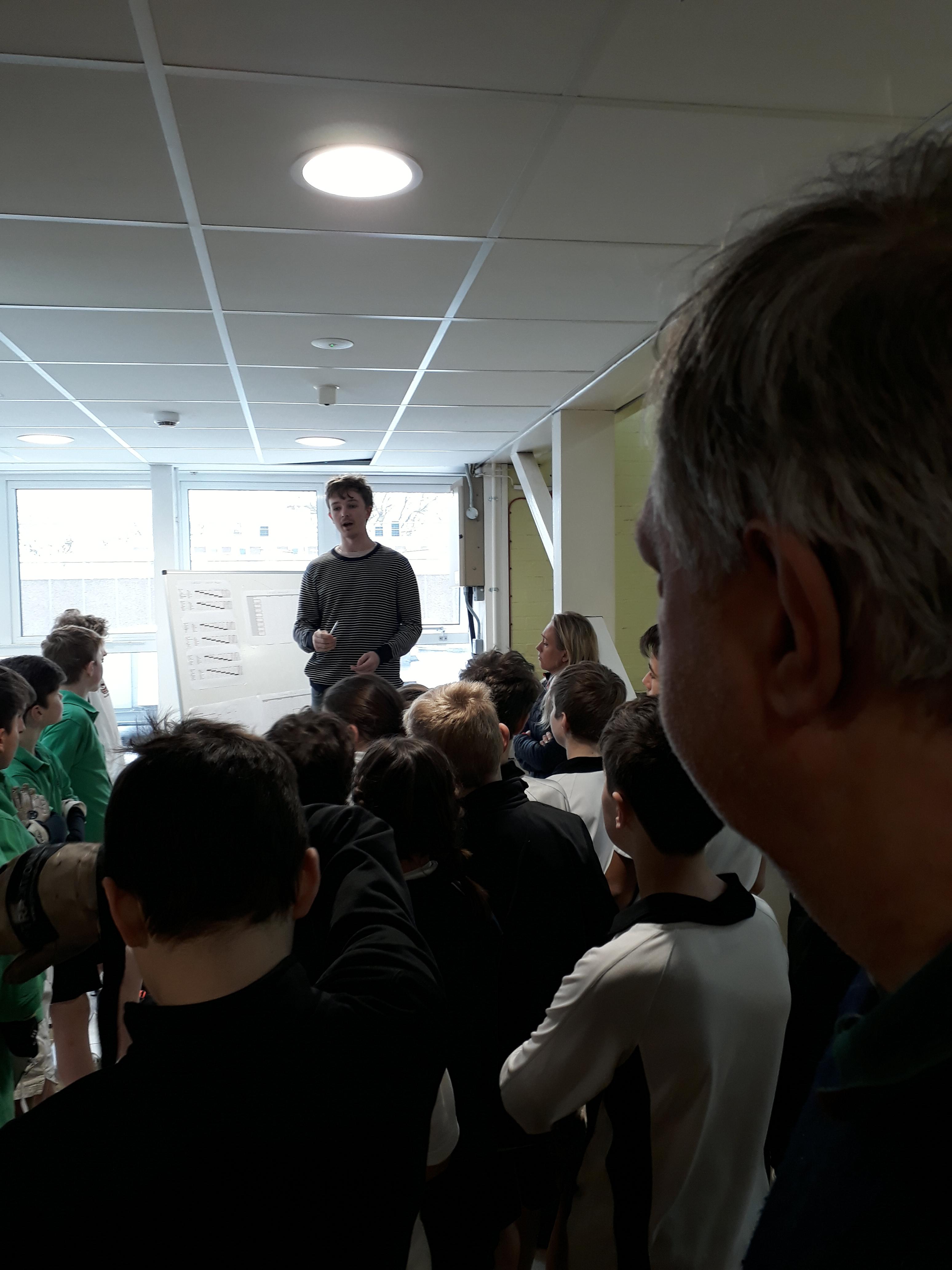 And begin they did, with, in the singles, six pools of players battling for a place in the last sixteen. These early rounds of the tournaments made for gripping viewing, as nearly every match-up was happening for the first time. Davies (Pilgrims’) eased out Harrison (Alleyn’s Junior) 11-10 in a nail-bitter of an encounter and Akerman (Pilgrims’) lived up to his pedigree in beating Fitzherbert (Blundell’s) in an important clash of pool 2, also 11-10. It soon became clear that the key question of the day was: ‘Power or placement? A discourse between big hitting and tactical nous in U13 Fives’. The answer would soon become clear.

By lunchtime, the tournament was on fire, as sixteen players had qualified for the knockout stages of the singles, still representing all schools apart from Alleyn’s Junior, who in spite of being a couple of years younger than everyone else had played some winning fives. Perhaps due to growing tiredness in what is a marathon day of sport, the matches in the knockout stages started to become increasingly one-sided, with the exception of one titanic encounter in the last sixteen between Baron (St Olave’s) and Pesaro (Alleyn’s Senior) which I had the pleasure of watching. At 10-10, it was anyone’s game, only for Baron to take on a left hand down the line off the serve, a shot seldom played throughout the day, and make crisp contact to take the score to 11-10. At this stage, the players shook hands and left the court, only for organiser, quickly realising an important communication error, to run downstairs and inform the players that they had to play to 12. Back on court, the atmosphere was tense: the players exchanged serves for about five points until Pesaro managed to level things up with a cool drop shot, 11-11. Baron, however, dug in. He had won the game once and, in his mind, he was more than capable of winning it again. One big serve brought up match point number four. This time he successfully converted it to the rapturous applause of the on looking crowd, which included me and his mother. Game of the tournament.

Elsewhere, everyone else was making slightly smoother progress through the draw, and the semi-finalists had been decided in emphatic fashion: Baron (St Olave’s) v Boy (St Olave’s) and Bavington (Alleyn’s Senior) v Pryce-Lloyd (Alleyn’s Senior). The narratives underlying these contests added an undeniable edge and emotion to the occasion. Who would be able to best put their friendship aside and focus on being ruthless? Who would stake a claim to being the undisputed number one for their respective school? And, ultimately, who would be best at hitting a ball with their hands above a wooden bar two and half feet above the ground utilising all four walls of a rectangular court?

In the first semi, the answer was Boy, who used his preferred left hand to great effect on the return of serve, often creaming the ball out of the reach of his opponent before the rally had even started. Baron, who had already been involved in many hard games of fives, lacked the power to trouble Boy and ultimately never managed to get his doubles partner on the back foot, 11-3. The second semi-final, however, was a far closer affair. Bavington, who had been making a name for himself throughout the day as the player with the biggest right hand, was for the first time facing someone who could deal with his power. Pryce-Lloyd managed to use his touch and tactical ability to move his opponent around the court, thereby preventing him from winding up his power shot on a regular basis. The game was finally poised at 5-5, when Pryce-Lloyd, not a powerful player himself, slightly ran out of steam, giving his opponent too many mid-court balls, which were successfully dispatched. Bavington secured his place in the final, 11-5.

After an epic day of fives, the final itself was, perhaps inevitably, not as evenly contested as it could have been. Boy, who was undeniably the best player on the day, ran out a comfortable winner, 11-1, 11-4. Unlike Bavington and many of his peers, he confidently took on shots with his weaker hand at every opportunity and that, combined with a very powerful stronger hand, ultimately proved to be the difference. In the third/fourth play-off, Baron beat Pryce-Lloyd in another impressively close match, 12-10.

Meanwhile, in the doubles, some of the early rounds saw some colossal matches, with games to 11 lasting up to 30 minutes. Most notably, Pilgrims’ 1 v Bedford 2 (11-9) and Alleyn’s Junior 1 v Pilgrims’ 3 (11-8) were the longest matches of the day, with winners coming from all angles. The surprise success of the doubles came from Blundell’s. Their first pair, vociferously cheered on by GOAT Wayne Enstone, quietly eased their way into the semi-finals via two displays of grit and teamwork. In the end, however, the familiar faces from the singles also prevailed in the doubles, with St Olave’s (Baron/Boy) and Alleyn’s 2 (Bavington/Marshall) making it through to the final. Any speculation as to why Alleyn’s 2 were not in fact Alleyn’s 1 remained unanswered.

In the final itself, Boy, buoyed by his success in the singles, put in a thoroughly dominant display. He predominantly took up a position on the left-hand side of the court, hitting the ball down the line, cross-court and boasting into the nick with consistent ease. He even regularly stepped across court to take on right-hand volleys, which, although on his weaker hand, were often winners. His partner Baron was mostly left as a spectator, but maintained his focus to keep a good line and length when called upon. The Alleyn’s pair struggled to find answers to this sophisticated style of play and at no point managed to unleash their main weapon, which was Bavington’s powerful right hand. As a result, St Olave’s won comfortably, 15-2.

The plate competition, happening at the same time, was arguably the best contested tournament of the day. In almost every game, the losing pair scored more than 5 points, which was a testament not only to the quality but also to the competitiveness of the fives being played. The stand-out pairs, however, both came from Pilgrims’, as Pilgrims’ 1 beat Pilgrims’ 3 in the final, 15-6.

Before everyone left to get some well deserved rest, there was a little time to hand out some general thanks. As ever, Bob Dolby proved to be an unwavering supporter of the game and similarly Dave Butler helped ensure that everything ran smoothly on the day.

The biggest thanks, however, must go to the teachers and coaches, who had successfully engaged a considerable number of pupils with the sport and gave up their Sunday to allow them to play and have fun. The players themselves were also incredibly enthusiastic and a pleasure to organise, with Davey, Dorokhov and Bedford Modern all taking home coveted chocolate egg awards for outstanding play and sportsmanship  (although these really could have gone to anyone — someone had to eat the chocolate!)

The competitive season is now over for the U13s. However, I anticipate an even bigger and more competitive tournament next year, so stay tuned. 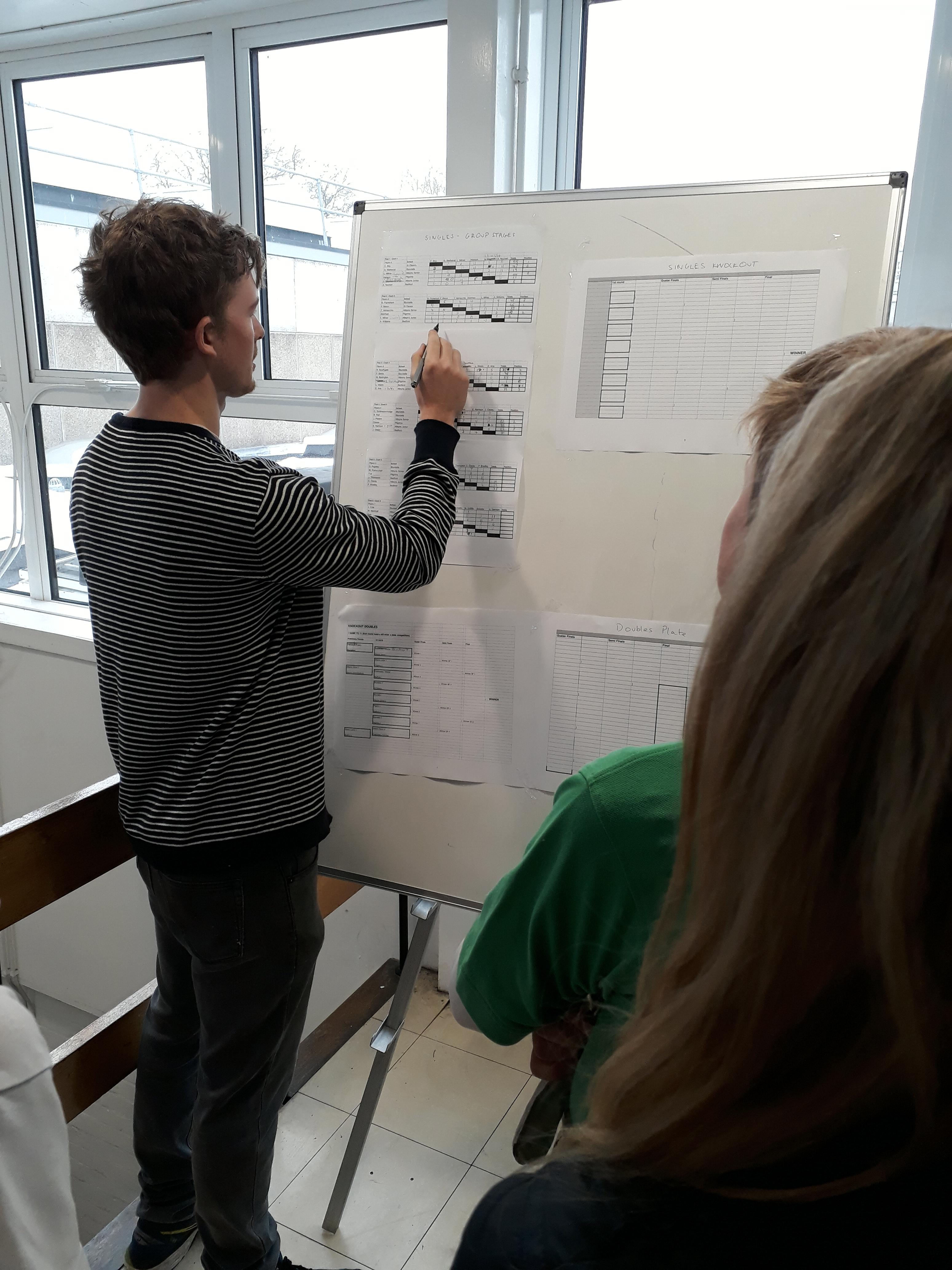