STOP PRESS On a snowy weekend in Cumbria, Kathleen Briedenhann was able to regain the Ladies Winchester Fives Singles title she lost to Tessa Mills last year at Winchester. It was her third Singles title. In the afternoon Kathleen and Tessa made a successful defence of their Doubles title against Maddy Raynor & Katie Sumner.

Organiser Maddy Raynor reports: This year the Ladies’ Winchester Fives Championship was held at Sedbergh School, Cumbria on Saturday 5th March, with the competition changed from the normal Sunday to Saturday so as to give competitors time to travel to Sedbergh and make the most of visiting the stunning Yorkshire Dales (and the Lakes only just down the road). With a few hiccups on the way it was with great anticipation that the nine players took to the courts at Sedbergh where Jonathan Lidiard and the school had done a great job with cleaning the courts in preparation of this event.

We had some returning faces as well as a few new ones this year, with players travelling from across the country; Kathleen Briedenhann and Tessa Mills from Eastbourne, Jessica Morton and Maddy Raynor from Devon, and Katie Sumner from Bedford, plus Ruby Page, Polly Bell, Imogen Boddy and Jemima Cookson from Sedbergh . It was great to have a group of schoolgirls competing again this year, with a lot of talent on show.

The competition kicked off with the singles tournament. The first round saw Page and Morton play against each other. This was a good match, with both players using this game to get used to the courts and get rid of the competition nerves. It was Page who was victorious, beating Morton 15-4, and then went on to face Raynor. Here Page showed great potential and ability to hit the buttress on her serves, catching Raynor out, but Raynor was too strong and went on to win 15-1. In the other court Sumner dominated her first game against Bell to win 15-2 to then go on and face Mills, which was a close contest, with Sumner playing some great shots, but it was Mills who went on to win 15-3. Whilst Mills vs Sumner and Page vs Raynor were playing, Boddy faced Cookson in a very close match with both players showing great ability and canny placement; it was Boddy who eventually managed to secure the win 15-13 to go into the semi-finals to face Briedenhann.

The semi-finals saw Boddy, who only started playing fives 5 weeks before the competition, face Briedenhann and Mills face Raynor. Briedenhann dominated her semi-final to win 15-0, 15-1 despite Boddy’s best efforts. Whereas in the Mills vs Raynor semi-final the score was initially refusing to budge. It was a battle of serves, with both players showing grit and determination. The matched seemed never-ending, but eventually, when the score was 8-8, Mills managed to pull away to beat Raynor 15-9. Mills then went on to dominate the second game, winning 15-3.

The singles plate competition was being played at the same time as the semi-finals; it was a round robin with Bell, Cookson, Morton, Page and Sumner all battling it out. There were some close and competitive games, but it was Sumner who was victorious, winning all her matches. This was an impressive mini-tournament to watch, as it was all the players first time entering a Ladies’ National Competition and they all played really well, demonstrating some great shots and tactical play.

So it was Briedenhann (attempting to regain her title) and Mills (defending champion) battling it out again in the singles final. Mills took the lead first, using the buttress to her advantage, but it was Briedenhann who then managed to pull the score in her favour to take the first game 15-8, with both players playing some amazing shots and looking very equal on the court. In the second game Briedenhann took the lead, but Mills digging deep, started to reel the score back in, and it was beginning to look like a repeat of last year’s epic gruelling match. However, Briedenhann managed to keep ahead and won 15-9 to regain her title. This was a brilliant singles final to watch with some fantastic fives being played and hopefully it has given some of the younger and less experienced players a taster of Ladies’ Fives at the top level and inspired them to continue to play and improve to the best of their ability.

After the singles saw the doubles played in a round robin format. Briedenhann & Mills won their first match against Bell & Boddy 15-0, whilst scratch pair Raynor & Sumner (with a few communication errors) beat Cookson & Page 15-2. The second matches in the round robin saw Briedenhann & Mills beat Cookson & Page 15-2, whilst Raynor & Sumner beat Bell & Boddy 15-2. Due to the points scored the last matches in the round robin were scratched, as the pairs would be facing each other in their respective finals.

Bell & Boddy faced Cookson & Page in the plate doubles final, where they were battling it out for the ‘Keep Calm and Play Winchester Fives Mugs’, so it was all to play for. This was a closely contested match with some great fives played and the girls using the buttress to their advantage. In the end it was Bell & Boddy, the older and more experienced Sedbergh pair, who were victorious, winning 15-4, 15-5. Congratulations!

Sumner & Raynor faced the defending champions in the final. It was Sumner’s first Ladies’ National Final. They started off very determined and started to make progress against the champions, but Briedenhann & Mills’ experience of playing together proved too strong and they went on to win 15-9, 15-3.

Thank you to all the players who participated: it was truly a very enjoyable day of fives and it was lovely to see the young players improving so much throughout the tournament. I look forward to next year’s competition at Malvern College. Also a big thank you needs to go to Kathleen for organising the ‘ladies fives’ t-shirt which you can see everyone in the group photo wearing proudly. 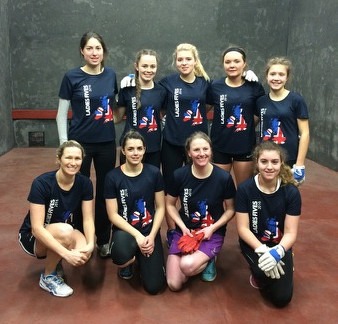 The Ladies at Sedbergh 2016 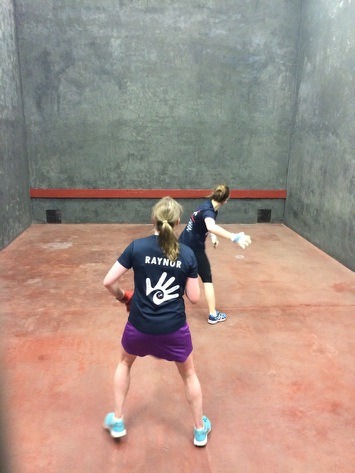 Tessa Mills serving to Maddy Raynor in their semi-final