Later in the day Tessa, a student at Canterbury Christ Church University, also won the U23 Singles title, beating Shinan Zhang of Southampton University  in the final. Shinan had defeated Louise Mathias of Bristol University in an eagerly awaited and very close semi-final.

A 7-strong squad of girls who came down from Fettes College were rewarded with the Doubles Plate for their first pair, while Cambridge University’s Georgina Shepherd won the Singles Plate.

The best laid plans and all that….. . Organiser Kathleen Briedenhann had a neat and tidy 16 entrants for the Inaugural Ladies U23 championships, with four universities and two schools represented, and was looking forward to a morning’s Doubles and an afternoon’s Singles when Mother Nature contrived to put a spoke in the wheels: Storm Angus stranded 7 Fettes girls and their coach at Edinburgh airport and Louise Mathias at Bristol railway station.

Undeterred, those who had made it to St. Paul’s on time set about playing what matches they could while awaiting news of progress from far-flung places. Eventually all was well : the Scottish contingent made it by noon and Louise likewise. The programme could revert to plan.

With six national champions at various levels competing, plus the captain of the Cambridge University Ladies, expectations were high and those who came to watch, – parents, friends, coaches, young men competing in the adjacent British Universities Championships – were not disappointed.

After a series of round robin matches in which national U14 champions Maddy Kent & Katie Sumner impressed and Cambridge’s 1st pair of Georgina Shepherd & Lottie Simpson grew in stature to fight out the bronze medal match, a final of great quality ensued. New pairing of Tessa Mills & Freya Harrison took on Louise Mathias & Shinan Zhang, all schoolgirl champions, in a match which went to three games, snatches of which can be seen in Sam Russell’s video of the day. Tessa and Freya emerged as winners, which meant that Tessa now holds the treble of Doubles titles (National Rugby Fives, National Winchester Fives and U23s) while Freya added a senior title to her U16 Doubles title.

The Singles competition was unlikely to be as close since Tessa is clearly the best player of this age group, but the great interest lay in the first clash as seniors, in the semi-final, between Louise Mathias, the 2015 schoolgirl champion, and Shinan Zhang, her predecessor. The match seesawed throughout but was turned in the last stages by Shinan’s greater power. The same power enabled Shinan to give Tessa a reasonable game in the final but not enough to prevent her doing the double on the day.

We look forward to a bigger entry next year, with more universities represented (this time it was Nottingham, Southampton, Bristol and Cambridge) and more schoolgirls (Fettes and Rugby this year) and kinder weather. The event can only progress! 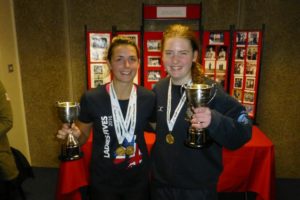 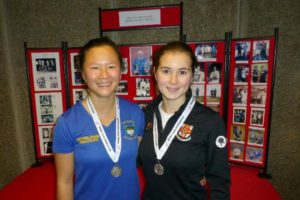 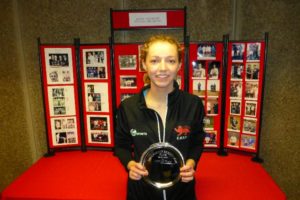 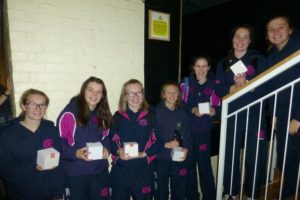