The RFA is sad to announce the death of Alastair Mackenzie on Monday 29th June, aged 82. He was a towering and much loved figure in the world of Fives, well known as a first-class player, especially at singles, and legendary for what he termed “après-Fives”, which comprised great enjoyment of well-brewed beer and most especially wine, particularly the red-coloured variety.

Alastair was a distinguished writer on the subject of wine – with three books on the subject to his name – who took great pleasure in tasting and relishing wines of all kinds. He most especially enjoyed introducing others, however resistant, particularly after club matches, to the qualities (and frequently quantities) of good wines.

During his time as a very popular RFA President 1983-85, he toured around the country playing in every national and regional doubles tournament – offering himself as a partner to anyone who was unpaired.

He was also President of the RFA Club 1983-89, President of Oxford University Rugby Fives Club for many years, and a long-standing and enthusiastic Jester.

His crowning Fives achievement, as master in charge at St Paul’s School when it moved from Baron’s Court to Barnes, was to persuade the planners to build not two or four, but a row of six Fives courts in the new gymnasium complex. On these marvellous courts many of our national tournaments, junior and senior, are played in comfort. In his day as master i/c and subsequently, they have nurtured many Pauline champions.

What he achieved for SPS, he then repeated for Oxford University, running an appeal with John East and Ron Swash to establish two Fives courts on the Iffley Road Sports Complex, to replace the courts at Worcester and Keble which had been pulled down.

Alastair learnt his Fives at Clifton College, where he became the captain and number one player (with fierce battles against Bristol Grammar School’s John Evans, later his partner at Oxford University).

In 1988 he won the President’s Cup with Jeremy Schroeter, having already won the Mate’s Plate in 1984 with Neil Butterfield.

Alastair leaves his most supportive wife Pauline, who nursed him devotedly as his health declined in recent times, and two Fives-playing sons: Bruce, an Oxford Blue, and Stuart, a former West of England Schools and National Schools champion (with Gideon Bierer) in 1985.

There will be a private funeral for the family only on 15th July.

There will be a full obituary in the RFA Annual Review. Please join in celebrating this great man with stories, thoughts, and reflections, in the Review and on the website, by sending them to Dick Warner <dick@class.co.uk> 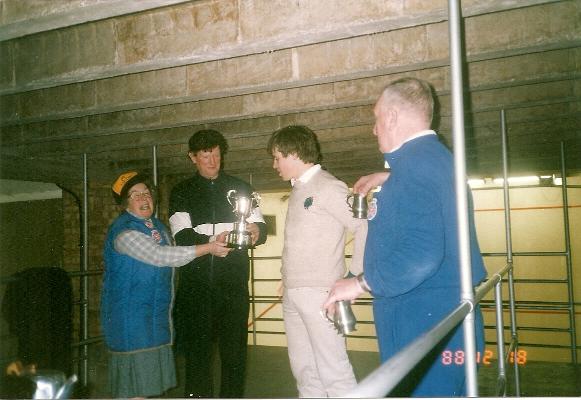 Alastair Mackenzie receiving the President’s Cup in 1988 from Joan Wood,