It is with great sadness that we report the death of the inimitable Tim Lewis after a short illness.

How can I adequately describe such a colourful and totally unique character to anyone who did not have the pleasure of meeting him? Fortunately, most rugby fives players did not miss out on an encounter with Tim – an indelible, ineradicable experience.

Tim was a remarkable and unforgettable type of guy, who learned how to play the wonderful game of rugby fives during his school days at Clifton College in Bristol. Tim was a boarder at Clifton between 1967 and 1972 and it was always the Easter term sport for those boys who did not wish to play hockey or soccer. However, it was not until he finished school at the age of 18 that Tim learned the game properly under the rather severe tutelage of his lovely and fun loving brother Pete, the indomitable Malcolm Bramley, and, of course, the great family friend, Cedric Clapp. They had set up the Mamhead Fives Club at the University of Exeter a year or so previously, which metamorphosed into the now infamous Exeter Fives Club.

Tim had “no left hand” at all in those days and these three told Tim he had to play on the left side and take every shot with his left hand – woe betide him if he did not obey and squeezed in an occasional return with his right hand!

Tim was a very underrated singles player. Through the 80s we met up on a Friday evening at the University courts and played three games to 15, which usually took us the best part of an hour and a half; we both learned a lot from each other. When the National Singles qualifying tournaments were introduced in 1988 we entered the West of England Regional and Tim, although well placed in the results, did not qualify but said he would like to come up to London to support me and also be a reserve. When we arrived at the courts, the first person we saw was Jeremy Schroeter, who took one look at Tim and exclaimed “What are you doing here, Lewis, you’re not good enough!” Tim proved to all that in fact he was good enough by qualifying as of right a year or two later and won through to the final of the Plate, where, ironically, his opponent was the same Jeremy Schroeter.

What a doubles partner Tim turned out to be: over the last 30 plus years I have hugely enjoyed the privilege of playing with him in many tournaments. He was so much fun and caused great hilarity wherever he was playing and, of course, in the pub afterwards. I have a mind full of joyful memories, too many to share here, but over a pint of ale in the pub I am sure the name of Tim Lewis will feature strongly in most of our stories from the past and cause us all to laugh merrily with a tear or two shed as well.

Tim and I decided at age of 65 (both born in 1953) to start our “never ending” Retirement Tour, which was rudely interrupted by Covid regulations: it was just before he was taken ill that we were excitedly talking about being able to recommence and add one more year to our original plan to go onto age 70.

Tim provided so much joy to so many and has hugely contributed to the folklore of Rugby Fives. I am sure we will all dearly miss the lovable, full of life person he was — what a man, what a fives player, what a character, what a friend. Bless you, Tim.

“I’m sure I’m not alone in having many fond memories of encounters with Tim over the years.”

“Really sad news … taken from us far too early.”

“… a fun guy to play against on court and great company in the pub afterwards.”

“… much larger than life …. A super bloke. I’m going to miss his voluble presence on court — fives will be quieter, and less fun, without him.”

“… super bloke who made fives down in the SW great fun. The first time I met him at Blundell’s he was “relaxing” in his usual way outside the court, so I assumed it would be an easy game. How wrong I was!”

“… a privilege to have known him. He will truly be missed.” 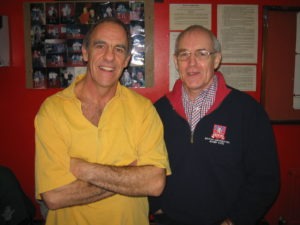 Tim with Geoff Sherratt in 2005 at the North West Open 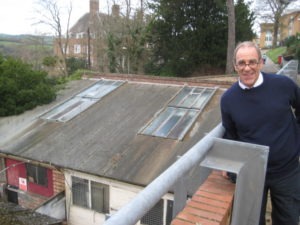 Tim overlooking the old Fives courts at Exeter University in 2012 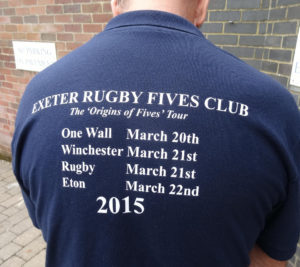 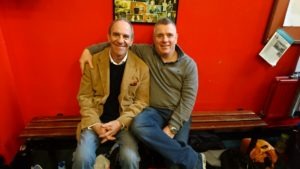